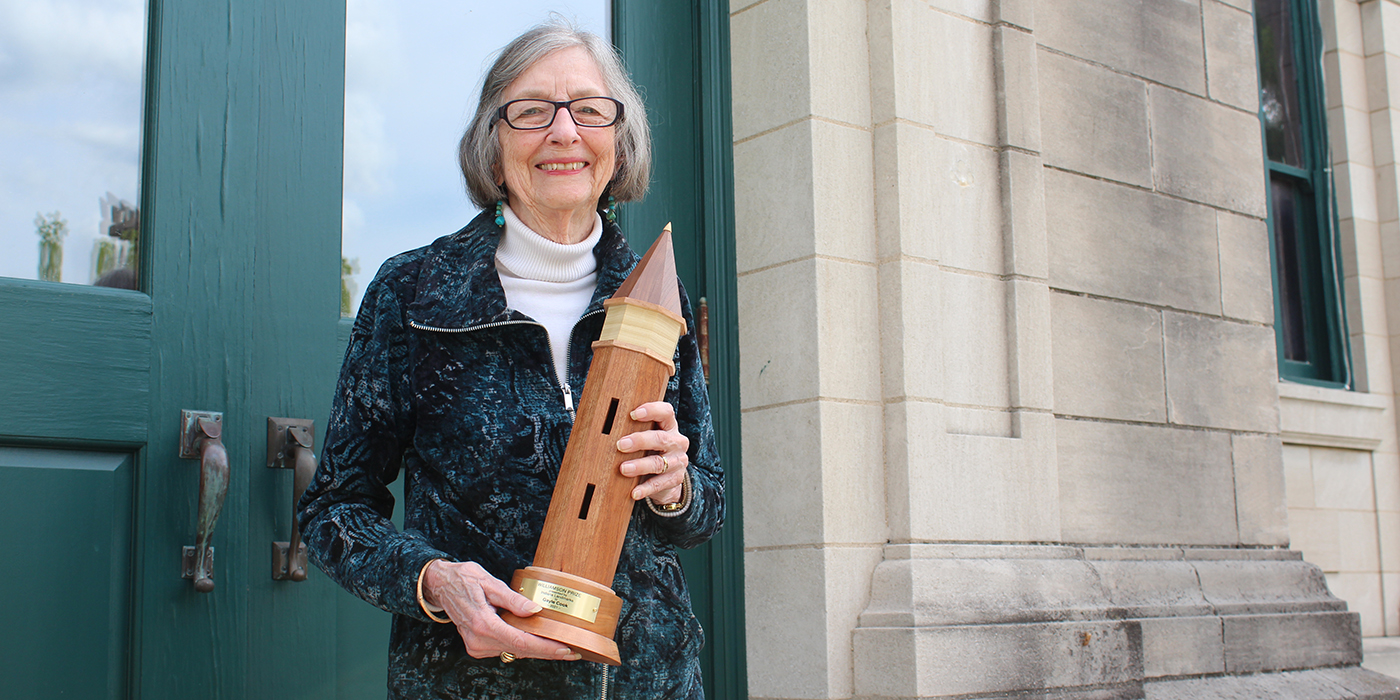 A list of places saved by Gayle Cook, her late husband Bill, and son Carl reads like a greatest hits of Indiana architecture: scores of structures including the Monroe County Courthouse, Beck’s Mill in Salem; Cedar Farm, a plantation house on the Ohio River; university buildings; downtown anchors; and huge turn-of the-century hotels.

“I can think of no other family in the world who has done more for historic preservation,” says Indiana Landmarks President Marsh Davis. “Beyond the sheer number of properties they’ve restored, Gayle and her family have elevated preservation in a very public way as both a social good and a practical economic activity.”

To honor her decades of advocacy and direct work to save important historic places, Gayle Cook is the recipient of Indiana Landmarks’ 2021 Williamson Prize for outstanding leadership in historic preservation.

“We did a little project down in French Lick and West Baden, and a few other buildings along the way,” laughs Gayle.

Following a partial collapse of the West Baden Springs Hotel in 1991, Indiana Landmarks bought the property and found its saviors in Bill and Gayle Cook. “People said, ‘You’re crazy, it’s going to fall down,’ but it was more of a challenge to Bill and me,” recalls Gayle. They completely restored West Baden, the so-called “Eighth Wonder of the World,” adding in restoration of the even larger French Lick Springs Hotel a mile away. In total, they invested $560 million, transforming the two historic hotels and reviving the economy of the entire region. 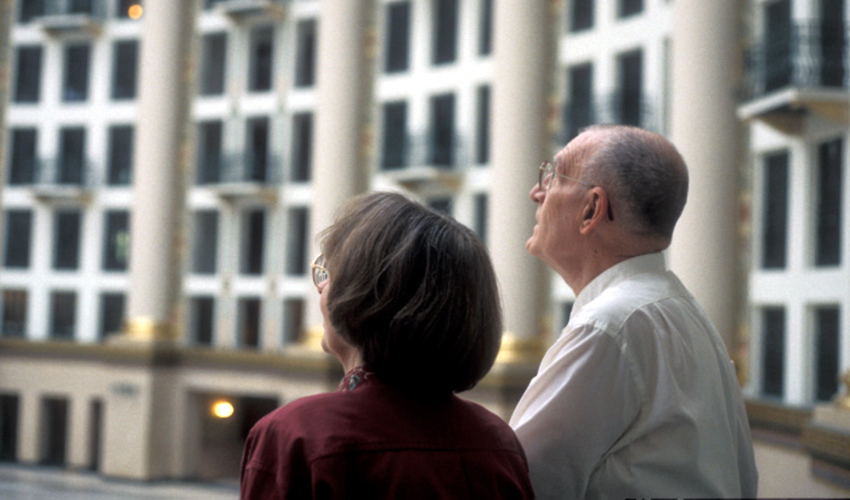 Saving places with significant history and one-of-a-kind architecture sparked the Cooks’ entrée into preservation in the 1970s, including one of their first preservation projects: the 1834 Colonel William Jones House in Gentryville, built for Abraham Lincoln’s merchant employer. But as they saw jobs and business leaving downtown Bloomington—where the Cook family lives and maintains headquarters for their international medical device company—they also saw preservation as good business, an opportunity to revitalize downtown by giving new purpose to abandoned and underutilized buildings.

They began with the 1850 James Cochran House on Rogers Street, renovating it as offices for the insurance division of their company. Gayle envisioned another building, a historic warehouse, as a downtown anchor, repurposing it as Bloomington Antique Mall. Other restorations followed: a railroad depot, an eight-story former hotel, the vacant J.C. Penney building, and the linked buildings that comprise the south side of the courthouse square.

When the Monroe County Courthouse was threatened, Gayle and a small band organized to defeat the demolition proposal. She remembered seeing murals beneath the building’s domed atrium while visiting the courthouse for jury duty years earlier, but the deteriorated artworks had been removed and their location was a mystery—until Gayle and Bill discovered the canvases rolled up in a former elementary school they’d recently purchased. Gayle, an artist herself, researched and underwrote restoration and reinstallation of the long-hidden murals.

When the south side of Bloomington's courthouse square languished, Gayle and Bill Cook purchased the buildings and created Fountain Square, full of retail and offices and a restored ballroom rented for events. (Photo courtesy CFC Properties) 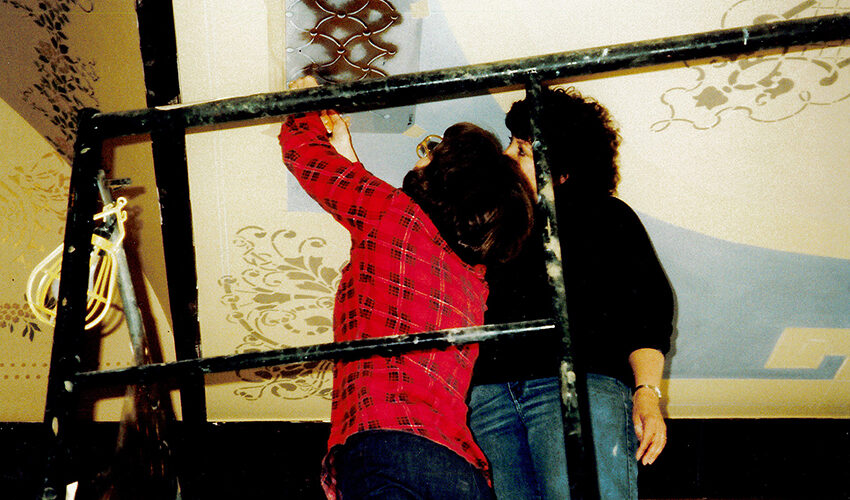 When the south side of Bloomington's courthouse square languished, Gayle and Bill Cook purchased the buildings and created Fountain Square, full of retail and offices and a restored ballroom rented for events. (Photo courtesy CFC Properties) 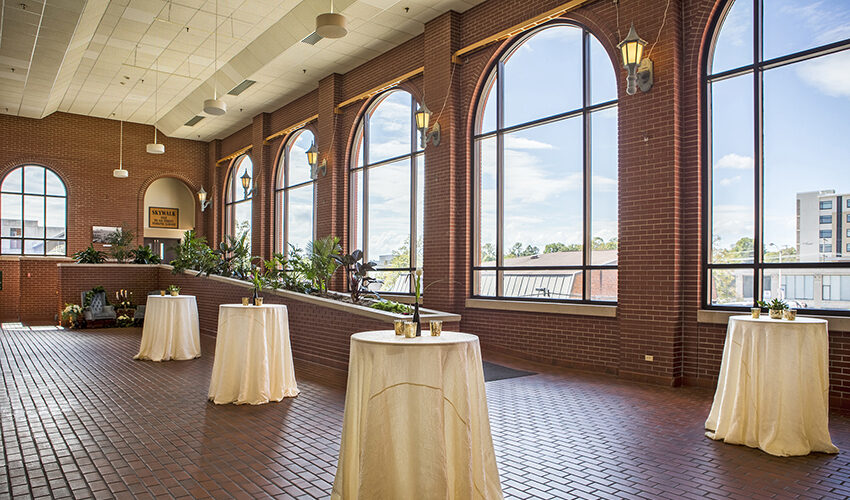 When the south side of Bloomington's courthouse square languished, Gayle and Bill Cook purchased the buildings and created Fountain Square, full of retail and offices and a restored ballroom rented for events. (Photo courtesy Crowe's Eye Photography) 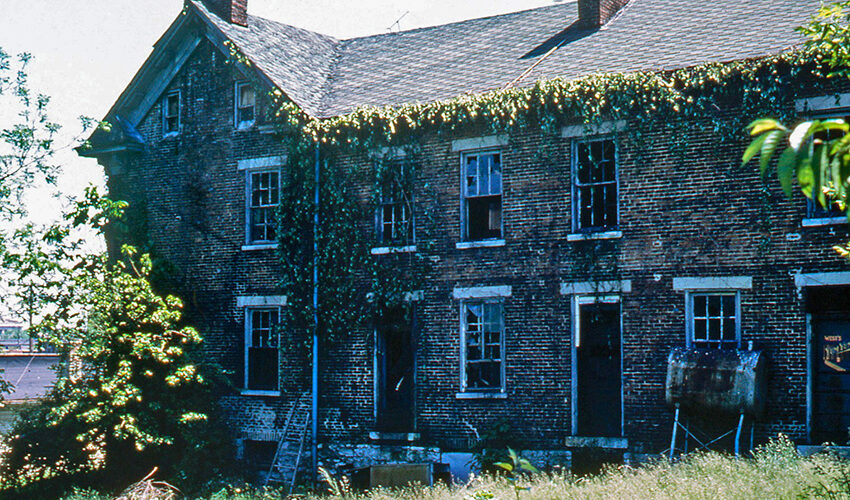 In the 1970s, Gayle and her late husband Bill renovated Bloomington’s Cochran House as offices for their growing company. ("Before" photo courtesy CFC Properties) 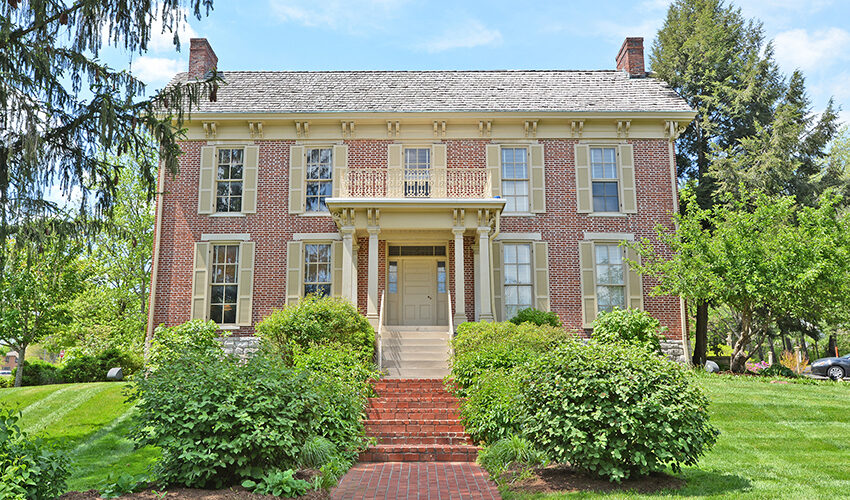 In the 1970s, Gayle and her late husband Bill renovated Bloomington’s Cochran House as offices for their growing company. ("After" photo courtesy CFC Properties) 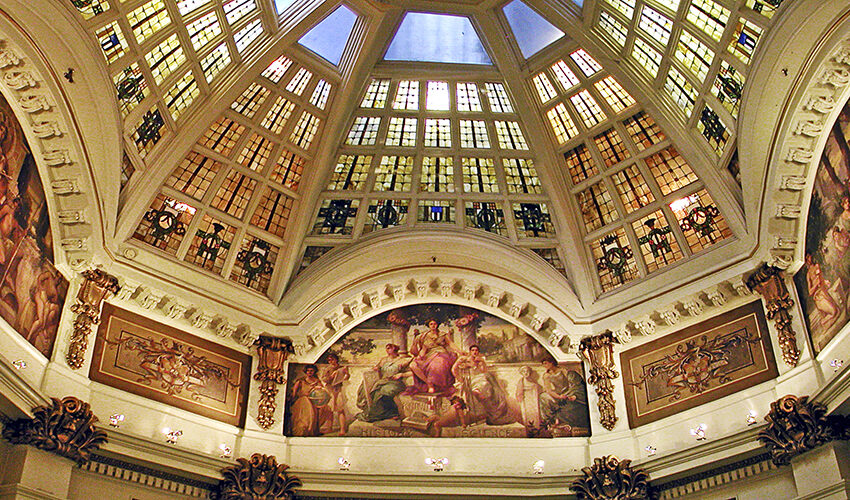 An artist with an eye for details, Gayle Cook spurred restoration of hidden murals beneath the Monroe County Courthouse dome. (Photo: Lee Lewellen) 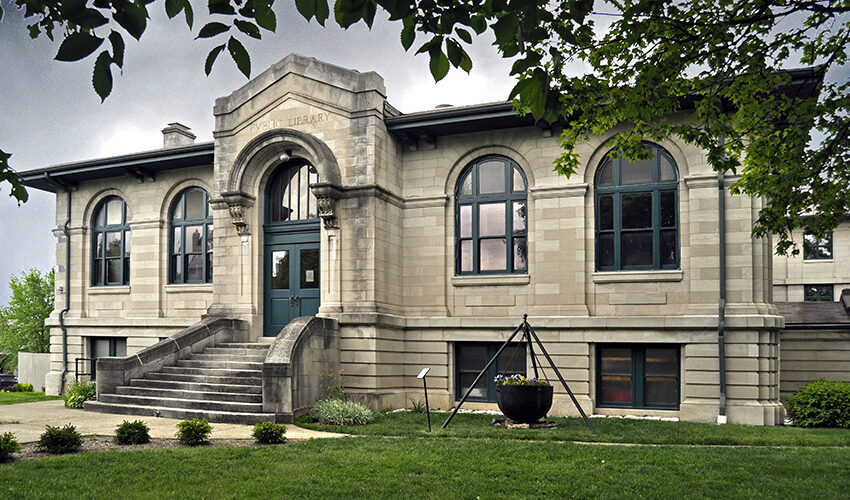 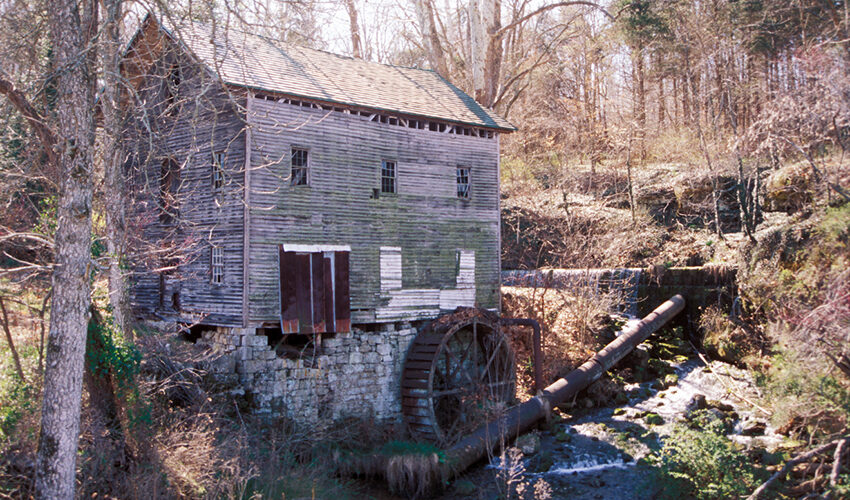 In 2008, the Cooks restored Beck’s Mill, an endangered 1864 site after its acquisition by a nonprofit group in Salem. (Pictured in before state) 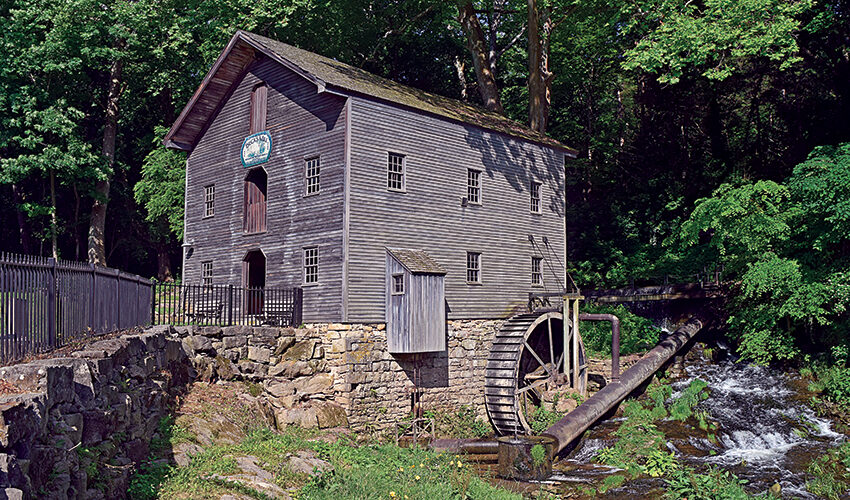 In 2008, the Cooks restored Beck’s Mill, an endangered 1864 site after its acquisition by a nonprofit group in Salem. ("After" photo by Lee Lewellen)
Previous Next

A detailed record-keeper and researcher, Gayle applied her skills time and again to discover the history of buildings they chose to restore, identifying key details to save. “She and Bill had a knack for selecting an era to restore a building to that brings out the most character of that building and gets the attention of the most people,” says Cook Group Architect George Ridgway.

Seeing the need for a community history center, Gayle helped raise money to repurpose Bloomington’s historic Carnegie library, designing and building a sensitive addition to create the Monroe County History Center. Along with raising money for the cause, Gayle donates her time, working throughout the year to sort, repair, and price items donated for the center’s annual garage sale, which raises hundreds of thousands of dollars to help the organization’s operation. 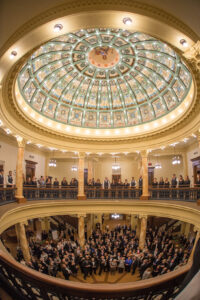 Since the 1970s, Gayle has given hundreds of talks to promote preservation and highlight historic places in Indiana. Her popular “Mystique of Domes” talk shares history and engineering lessons learned from West Baden and other domes around the world. Inspired by her interest in domes, she formed a partnership to underwrite restoration of the stained-glass dome at Indiana State University’s Normal Hall in Terre Haute.

In 2009, her affinity brought Gayle to Indianapolis, where she and Bill undertook their last preservation project together before his death: restoring the former Central Avenue Methodist Church, a vacant domed landmark in the city’s historic Old Northside neighborhood. The Cooks spent $16 million to convert the church into a state-of-the-art headquarters for Indiana Landmarks. “Like so many places in Indiana, we could not have done it without Bill and Gayle’s support,” says Davis.