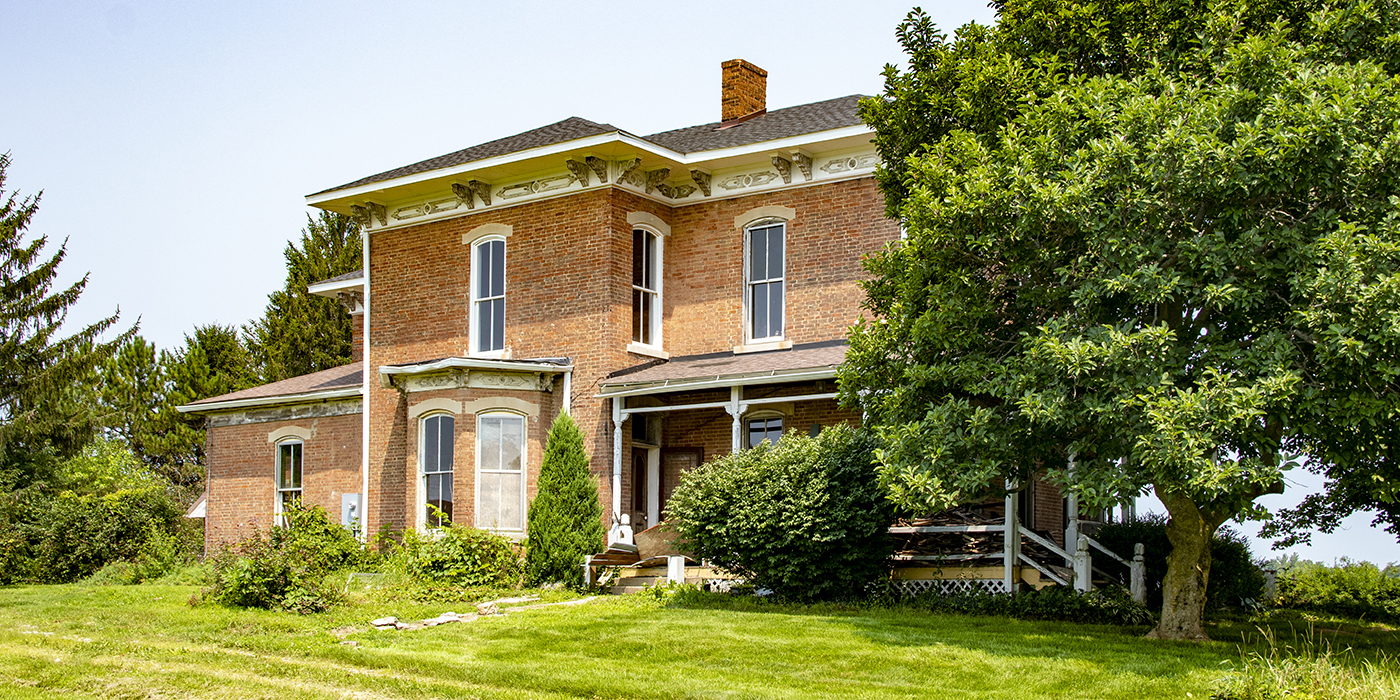 Indiana Landmarks’ real estate program is about more than simply buying and selling properties. For us, it’s a powerful tool for saving threatened or neglected places and sparking revitalization in areas that could use a boost. We employ a tried-and-true approach: investing in repairs to stabilize buildings and improve their marketability, then turning them over to buyers who finish the rehab. The projects become a billboard for the transformative power of preservation and a catalyst for additional investment.

After living in a 1920s-era house in Indianapolis’s Holy Cross neighborhood, Cru and Danielle Warren understood the needs of a historic home when they began searching for a new place to live outside the city. The c.1884 Robert and Mary Ann Leavitt House in Vernon spoke to them when they spotted it for sale on Indiana Landmarks’ website. Looking past the daunting list of repairs, they focused on the home’s craftmanship and intact interior features, including original trim, plaster, and unpainted woodwork. “We weren’t ready to sell our home until we saw that house,” says Cru. “We called the realtor immediately and put our house on the market.” 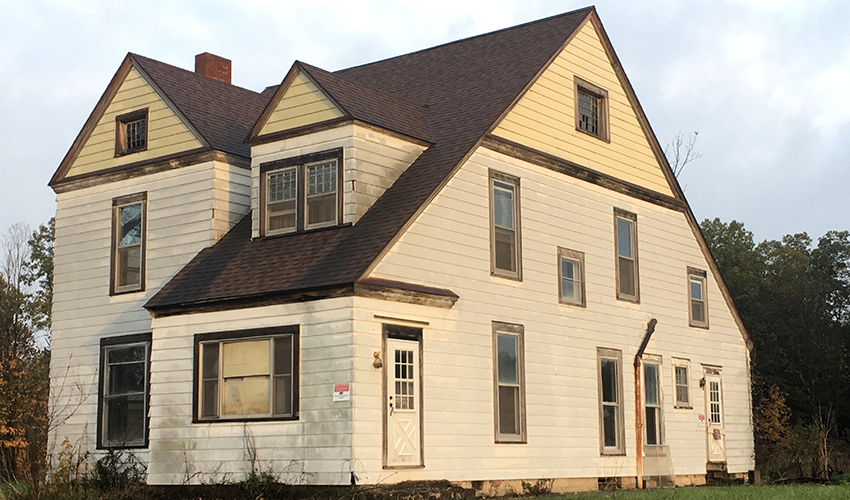 We speculated Queen Anne details might be hiding under grungy aluminum siding at Vernon’s c.1884 Leavitt House when we began restoration in 2020. The results didn’t disappoint. 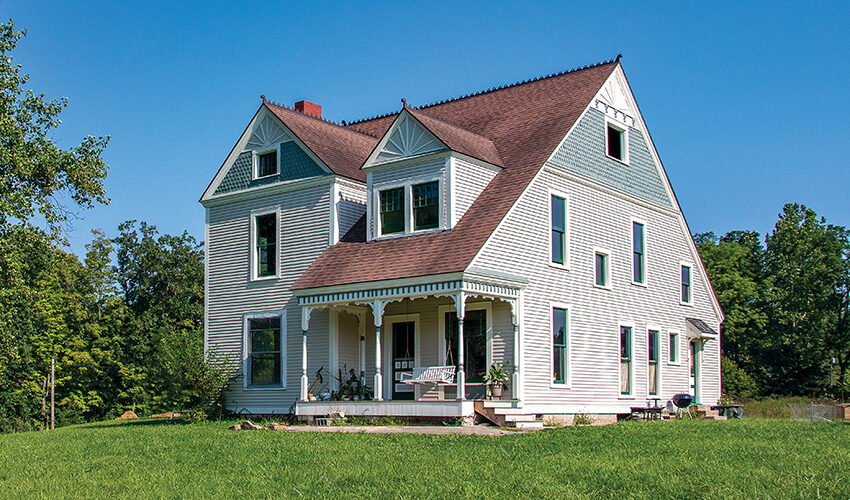 After reopening the front porch, and adding missing elements and fresh paint, the big reveal drew homebuyers Cru and Danielle Warren, who left Indianapolis’s Holy Cross neighborhood to move to the country and commence interior rehabilitation. 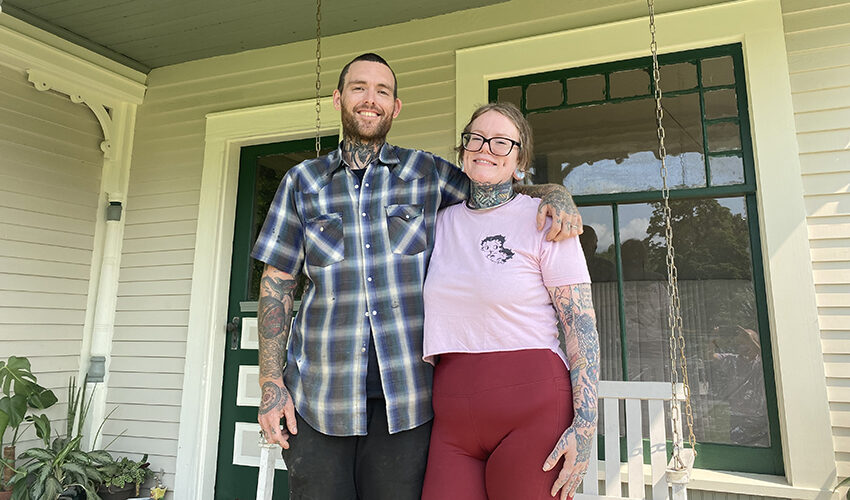 After reopening the front porch, and adding missing elements and fresh paint, the big reveal drew homebuyers Cru and Danielle Warren, who left Indianapolis’s Holy Cross neighborhood to move to the country and commence interior rehabilitation.
Previous Next

By the time the Warrens moved in, Indiana Landmarks had already pulled off grungy aluminum siding and added a fresh exterior paint scheme. Along with other repairs, we replaced missing Queen Anne details, including roof cresting and a new porch. As a contractor, Cru felt equipped to take on the house’s remaining rehab. The couple has been steadily incorporating vintage light fixtures and other old-house elements into the refurbished interior. “It’s really hard to find a 130-year-old house in such an original state,” notes Cru. “We have two little boys so being out in the country was really appealing as well.”

Growing up in South Bend, another contractor, Charles Schmidtke, learned restoration skills from his father, Axel. Now the pair are putting their knowledge to work at the 1879 O’Hair House and c.1875 barn in Putnam County. In 2019, after lightning sparked a fire destroying the house’s roof and much of the second floor, the owner donated the property to Indiana Landmarks. We installed a new roof and made other repairs before putting the property on the market. “I had driven by that house 100 times and loved it,” says Charles. “I like the Italianate style without all the gingerbread to paint. It’s so sound and I’m very excited to bring it back to life.” The father-son team plans to revive the property as a venue for small weddings and other events. He’s already made connections with descendants of the original builders, who are planning a family reunion at the house.

As a third-generation antiques dealer and auctioneer, Joshua Baxter of Carmel has always mixed a love of history with a taste for treasure-hunting. “Some people have trouble seeing past the dirt and the work, but I feel like when I walk into a place, I can visualize the finished project before I lift the first hammer,” says Baxter. That vision inspired him to purchase the c.1880 Wabash Sheriff’s House and Jail from Indiana Landmarks in 2021. By the time Baxter purchased the property, Indiana Landmarks had already made exterior repairs and replaced a clunky front porch addition with one more stylistically appropriate. “This place was really done on the outside, so I could walk in and get inspired to do something on the inside,” adds Baxter, who is using the project to teach rehab skills to his son, Josh Jr. The pair plan to convert the sheriff’s house into offices and install three apartments in the former cell block, incorporating original details into the redesigned spaces. 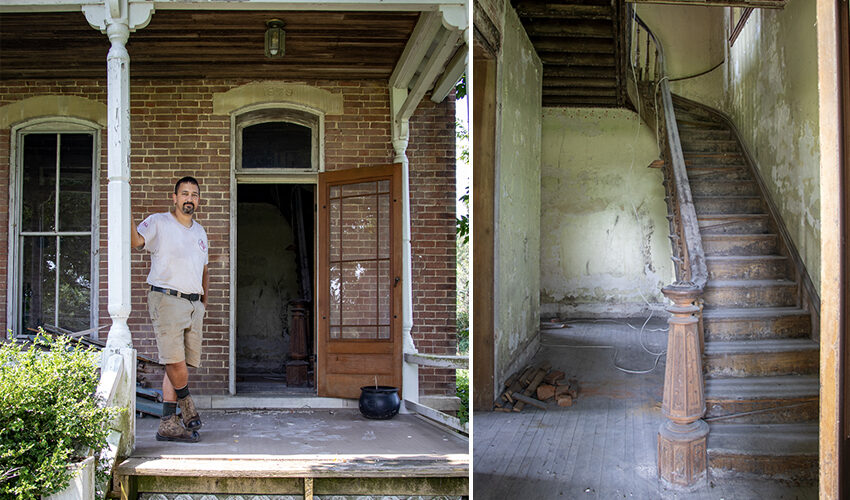 After making repairs to the fire-damaged O'Hair House in Putnam County, we sold the property to Charles Schmidke, who is rehabilitating the house and nearby barn. 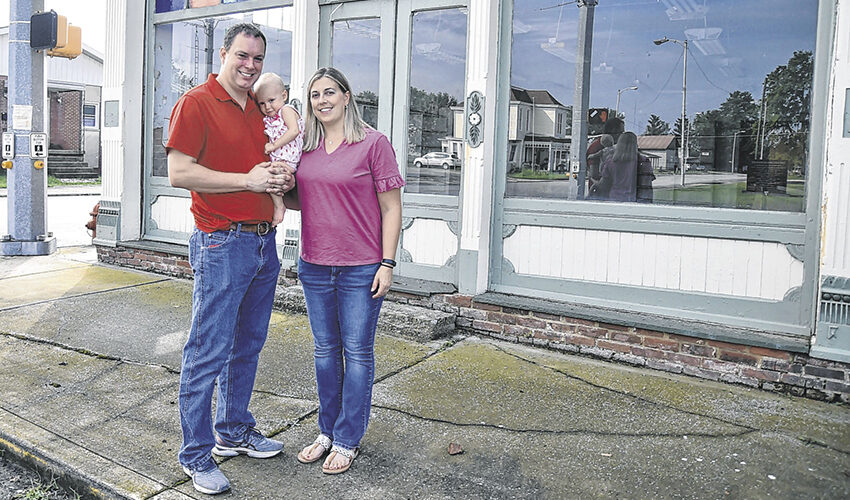 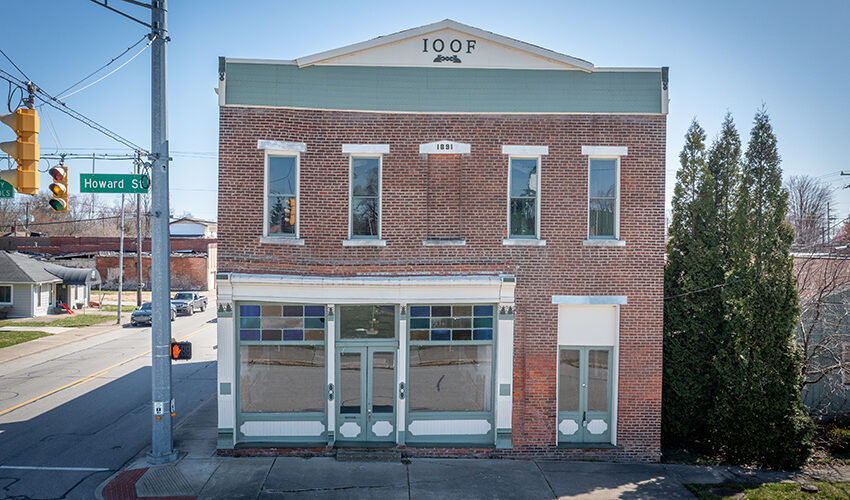 In Crothersville, a dilapidated 1891 commercial building on a prominent downtown corner appeared destined for destruction before Indiana Landmarks took on the building in 2015, stabilizing it with money originally set aside by the Town for demolition. Photo: Adam Schill, Dean Wagner Realtors 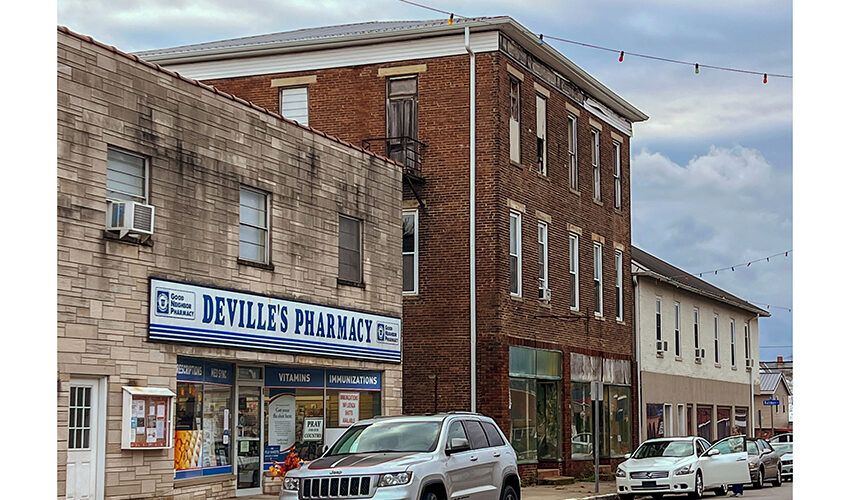 Town officials in Dillsboro recruited Indiana Landmarks to stabilize the c.1870 former Masonic Hall after a fire consumed the roof.
Previous Next

In Crothersville, a dilapidated 1891 commercial building on a prominent downtown corner originally housed an apothecary and pharmacy, with an Odd Fellows Lodge above. Its demise seemed imminent before Indiana Landmarks took on the building in 2015, stabilizing it with money originally set aside by the Town for demolition. We fixed the roof, rebuilt windows and made other repairs before selling the building to Scott County residents John and Sarah Edrington. Attracted by the structure’s “good bones” and its location along a heavily trafficked street, they plan to rehab the upstairs as apartments and lease the first floor for a restaurant.

A similar desire to revitalize a key downtown landmark—its last historic commercial building—led town officials in Dillsboro to recruit Indiana Landmarks to stabilize the c.1870 former Masonic Hall after a fire consumed the roof. Aided by $25,000 from the Town, we installed a new roof and plan to make interior repairs before offering the property for sale. 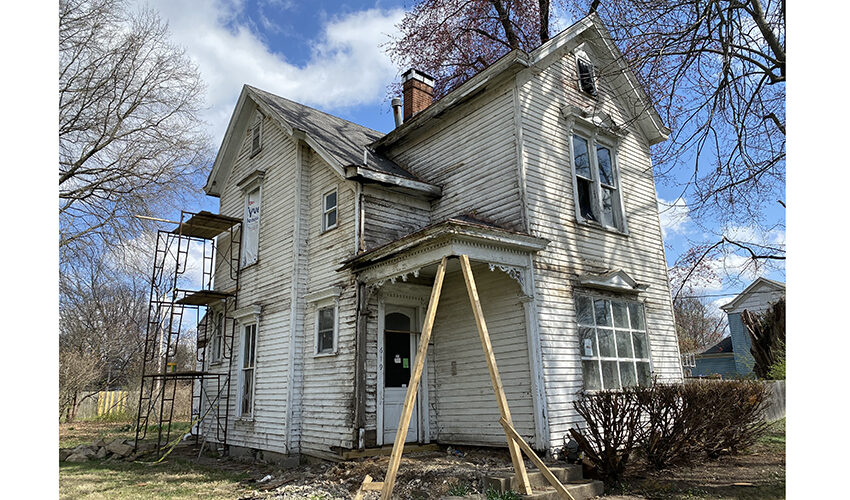 Hoping to inspire imitators in a Clarksville neighborhood, Indiana Landmarks partnered with developer Andy Carter on a rehabilitation on Harrison Street. 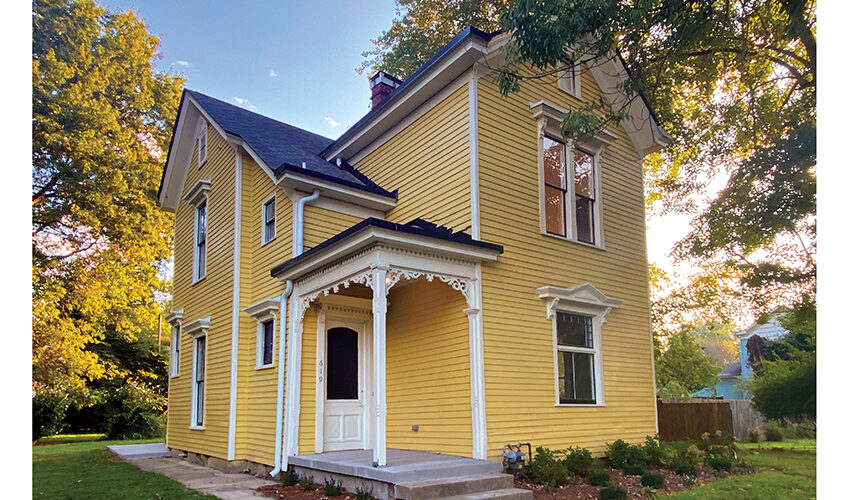 Hoping to inspire imitators in a Clarksville neighborhood, Indiana Landmarks partnered with developer Andy Carter on a rehabilitation on Harrison Street.
Previous Next

In Clarksville, the town’s historic preservation commission and town officials saw the historic South Clarksville neighborhood, located near the Ohio River Greenway and a new park, as ripe for reinvestment. In an area where many historic homes serve as rental properties, officials wanted to revitalize one house to inspire further investment. Indiana Landmarks acquired the c.1890 house at 619 Harrison Street from an out-of-state owner and sold the house to developer Andy Carter, who completed a top-to-bottom makeover recapturing the house’s historic character. “Kudos to Indiana Landmarks and the Town of Clarksville for having a vision of what this neighborhood could be and encouraging others to see what can be done with old homes,” says Carter.

In the past year, Indiana Landmarks also sold houses in New Carlisle and Jennings County, with sales pending at the end of the year on houses in Aurora and South Bend. Visit indianalandmarks.org/properties-for-sale to see historic places currently for sale by Indiana Landmarks and others.