From Greyhound Station to Restaurant

First of all, it’s blue. Not many blue buildings around, so it gets points for distinctiveness. Then there’s the great neon, which alternates so the greyhound appears to be running. The Art Moderne style still looks very hip. All reasons why people love the Greyhound Station and wanted to see it saved when it sat vacant for several years at 102 N.W. 3rd Street.

The city of Evansville gave the building to Indiana Landmarks in 2013. We restored the exterior to its 1939 appearance, which reintroduced the original shiny two-toned color scheme. The restored enameled steel panels contribute to the streamlined, auto-era look. Over 500 people flooded the sidewalk and street to chant the countdown when we relit the neon one evening in 2015, concluding the project’s $900,000 first phase.

“We started out with the idea of locating an Indiana Landmarks office here, and filling the building with other nonprofit organizations,” said Marsh Davis. “But we soon realized that a restaurant would contribute more to the downtown revitalization already underway.” We recruited Cunningham Restaurant Group, which opened Bru Burger at the Greyhound in November 2016. 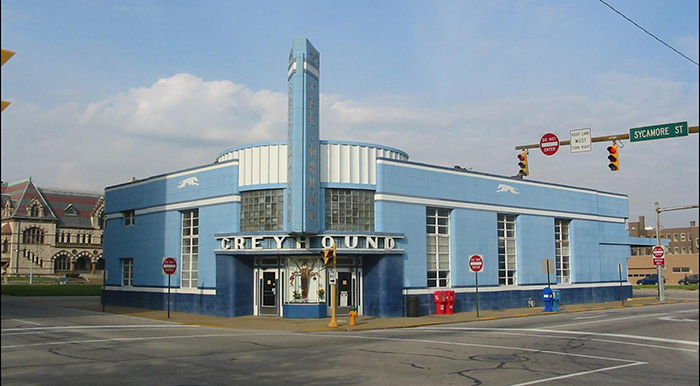 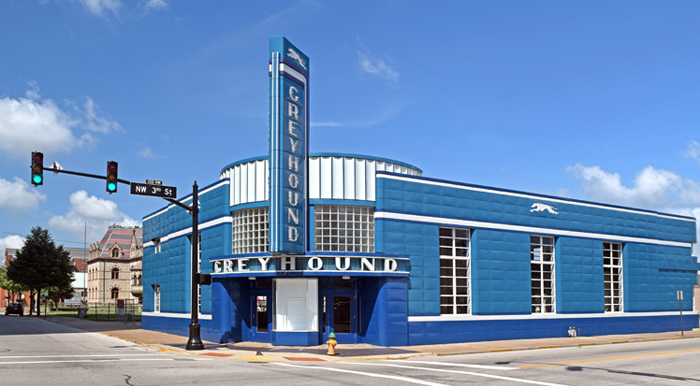 Indiana Landmarks shifted to a business model under the guidance Gene Warren, one of our Evansville board members. He crafted a lease with Cunningham so the payments cover our debt for the restoration.

“For Indiana Landmarks and our mission, it’s a huge win—an iconic building restored and an ideal reuse that adds to downtown vitality,” says Davis. “We’ll continue to own the building. If we sell the Greyhound in the future, we’ll attach a protective covenant to the deed, giving Indiana Landmarks the right to approve exterior changes in perpetuity, no matter who owns the building,” he adds.

Indiana Landmarks’ Greyhound team included our President Marsh Davis, Southwest Field Office Director Stewart Sebree, honorary chairman and former Evansville resident Randall Shepard, and its Evansville board members—Gene Warren, Christine Keck, and Kristen Tucker. Tucker Publishing Group helped create the marketing materials, sent to 60 restaurateurs in the region. “Our team also benefitted from the guidance of Mayor Winnecke and his administration. Their support for the Greyhound effort has been critical to saving the building and attracting Mike Cunningham,” adds Davis.

“We targeted Mike Cunningham early in our search at the urging of December Warren LeTexier, Gene Warren’s daughter who grew up in Evansville,” said Davis. “She now lives in Indianapolis’s Lockerbie Square district, where she’s a customer of Mesh, BRU Burger and Union 50—all owned by Cunningham and located in historic districts. She knows her hometown and what it needs, and she pointed us to Cunningham as the perfect fit for the Greyhound and the Evansville market.”

Cunningham owns nearly 20 restaurants in Indianapolis, Cincinnati, Lexington and Louisville. “The Greyhound brought us to Evansville, and we plan to embrace the history of the building,” declares Mike Cunningham, President/CEO of Cunningham Restaurant Group. “It’s a unique landmark and a unique opportunity and, yes, we’re keeping the great neon signs.” 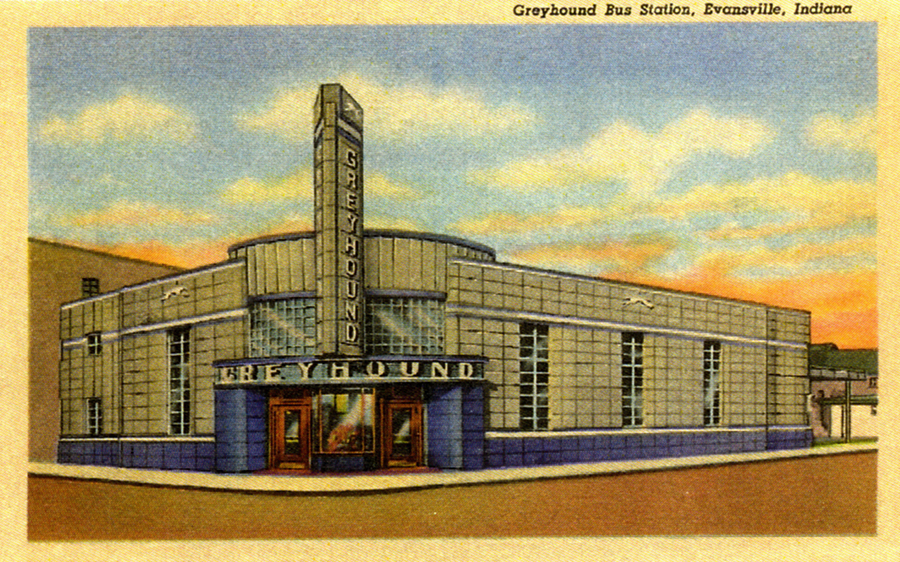