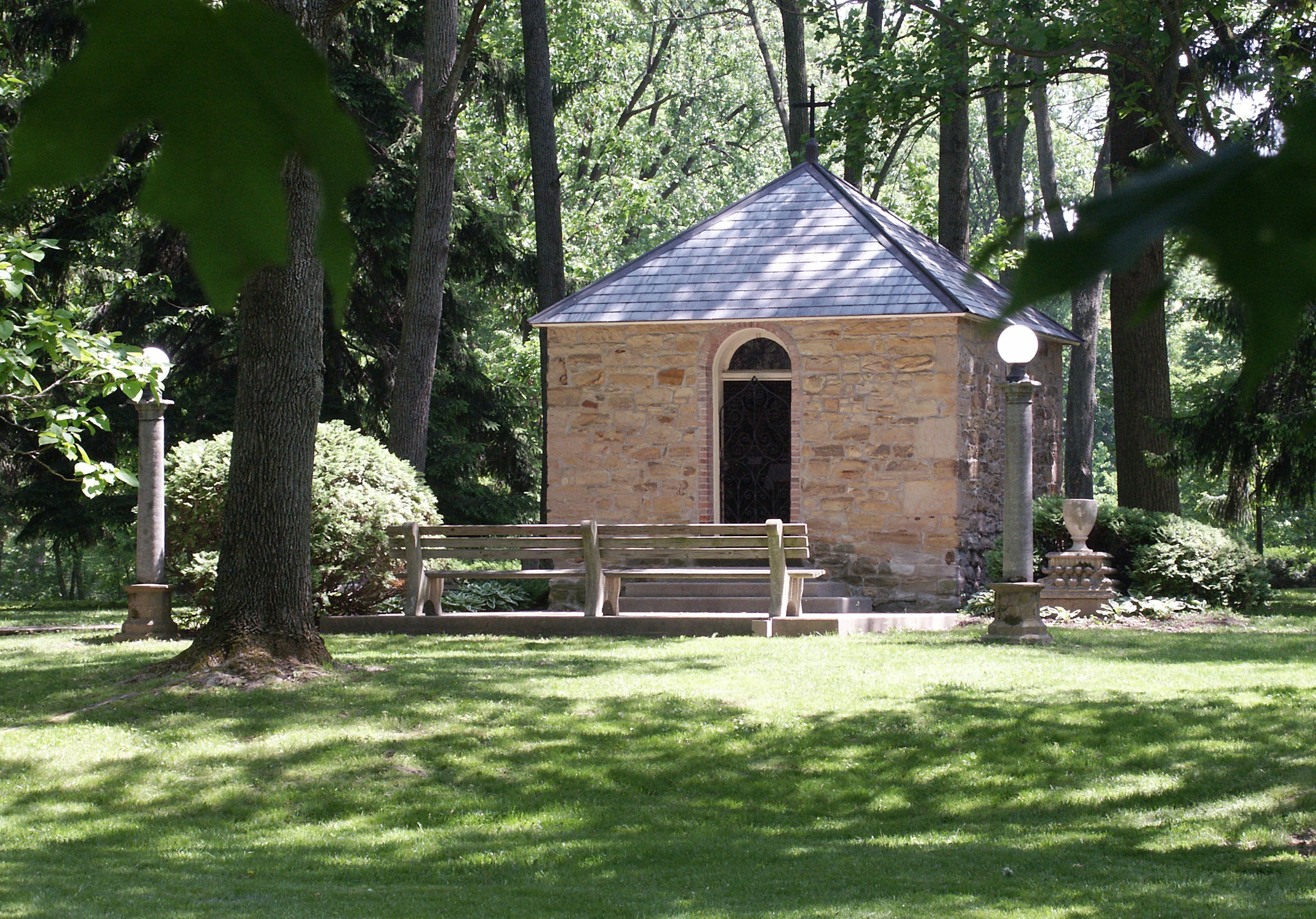 In November 1843, Mother Theodore Guerin and Sister Mary Cecilia Bailey were on a ship, praying hard. The two women were on their way back to America from France, where they had been asking for money to run the Sisters of Providence of Saint Mary-of-the-Woods, their fledgling convent near Terre Haute. As they crossed the Atlantic, their ship –- the Nashville –- encountered violent storms and giant waves. All on board feared for their lives.

The seas calmed and Mother Theodore and Sister Mary traveled safely back to Indiana. To mark their great relief and thanks, Mother Theodore directed construction of a small log chapel honoring St. Anne, the grandmother of Jesus and the patron saint of Brittany, France — Mother Theodore’s original home. That original chapel is gone, but its stone replacement is an intriguing artistic novelty on a religious campus rich with potential for exploration.

From the outside, the tiny St. Anne chapel belies the spectacle within. Nearly every surface of the chapel is covered in shells –- thousands and thousands of them encrust the walls, altar, candlesticks, holy-water font, and vases. On the floor, sea-green and coral-colored tiles are arranged in concentric shell shapes. Two stained glass windows include designs of shells and coral.

The remarkable designs are the handiwork of Sister Mary Joseph Le Fer de la Motte, who –- along with several novices –- gathered the shells from the nearby Wabash River, not known to most Hoosiers as a shell-hunting hotbed. Sister Mary Joseph created shell mosaics depicting the missions and journeys of the sisters, including an illustration of the Nashville on its auspicious voyage. Near the door, small shells trace out “1876,” the year the shell chapel was completed. 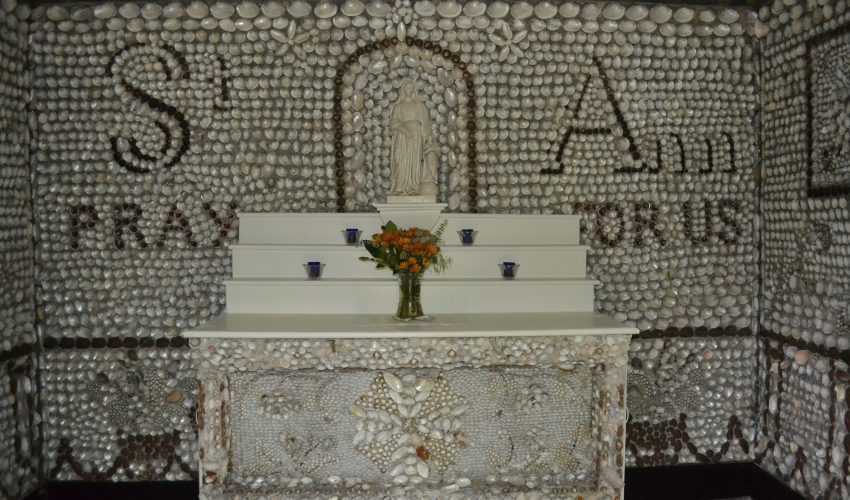 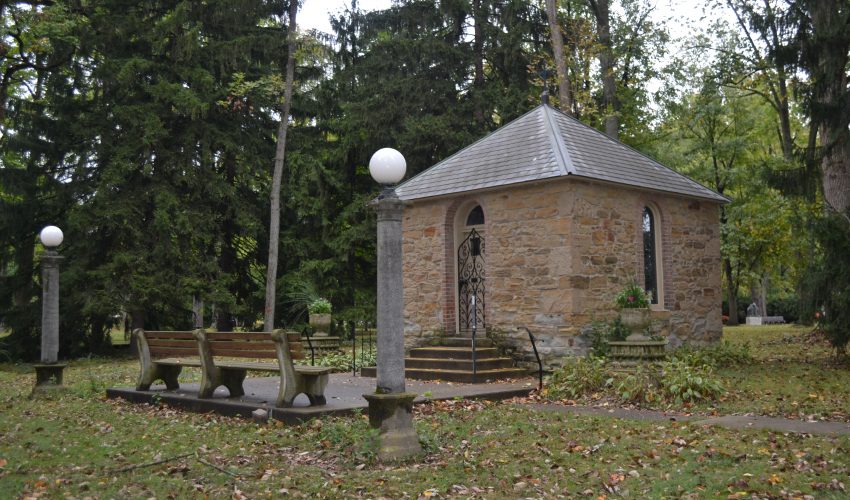 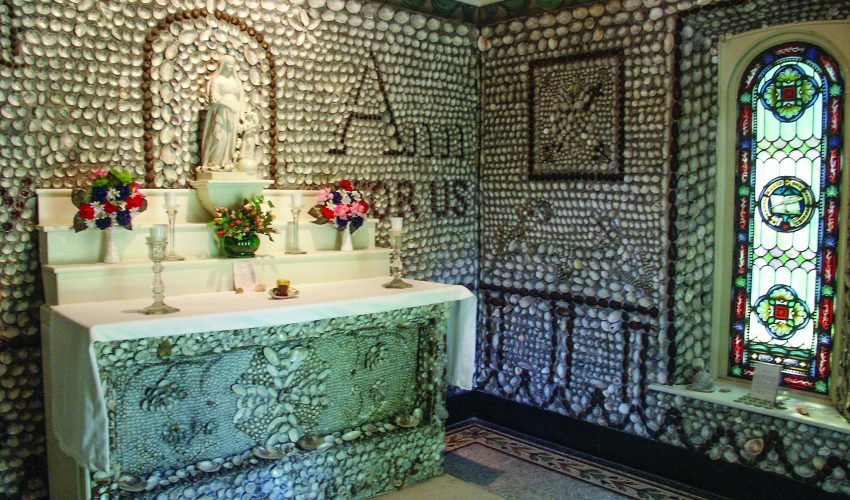 (Photo: Sisters of Providence of Saint Mary-of-the-Woods, www.SistersofProvidence.org)
Previous Next

In addition to St. Anne Shell Chapel, St. Mary-of-the Woods convent (which shares its campus with St. Mary-of-the-Woods College) includes historic shrines, grottos, a cemetery, and the magnificent Church of the Immaculate Conception completed in 1891.

In October, the nuns unveiled a shrine dedicated to Saint Mother Theodore Guerin, canonized by the Pope in 2006 –- only the eighth American saint and the only saint from Indiana. The shrine includes artifacts from Mother Theodore’s life and travels, and a simple casket holds her remains. It’s not for everyone, but if you want you can touch three of her finger bones.

Today Saint Mary-of-the-Woods is a busy place, a destination for pilgrimages, retreats, family outings, rentals and events. The sisters welcome visitors to daily mass and host regular workshops on topics ranging from faith and grief to baking and small-flock chicken care. The sisters also operate the Providence Spirituality & Conference Center and the White Violet Center for Eco-Justice, which includes a thriving alpaca farm you can visit.

A robust website will help you plan your trip to Saint Mary-of-the Woods.