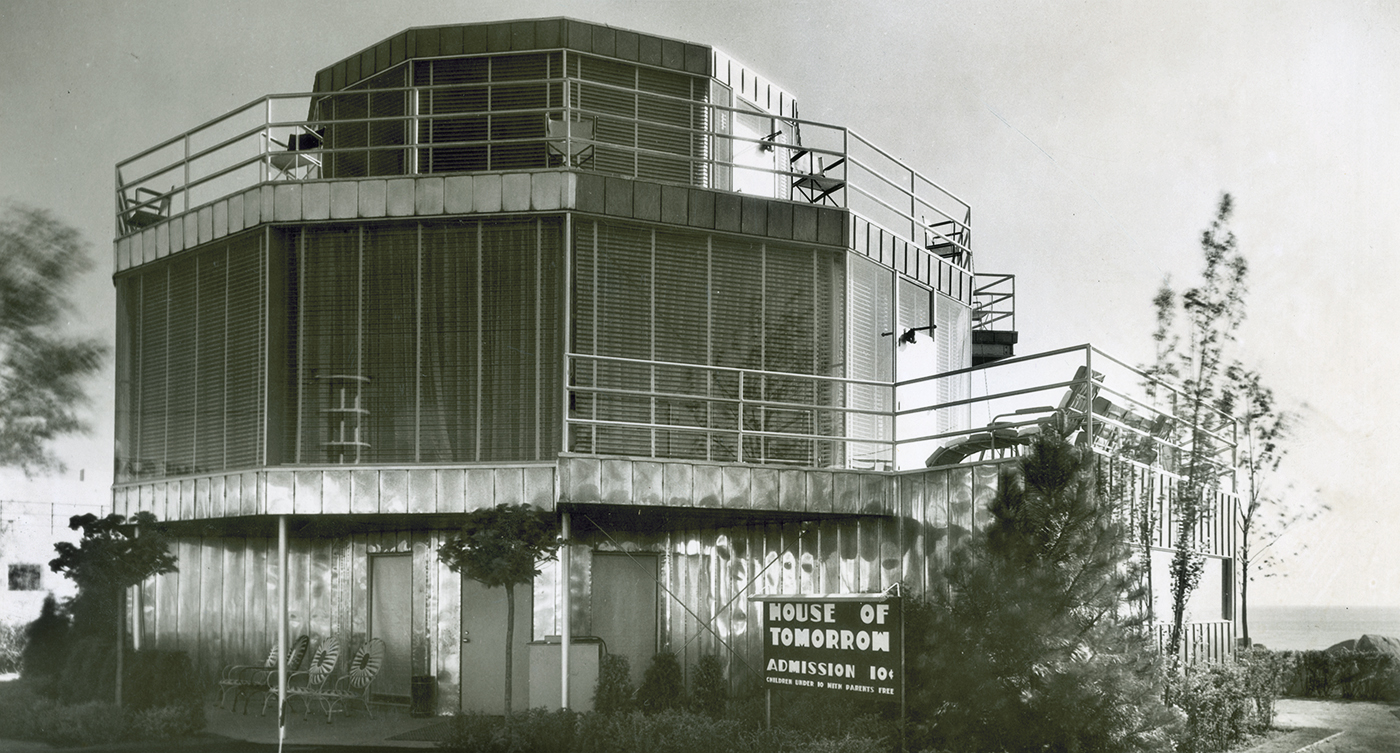 Widely regarded as one of the most innovative houses in modern architectural design, the House of Tomorrow in the Indiana Dunes was named a National Treasure by the National Trust for Historic Preservation, a designation that will aid Indiana Landmarks in saving the innovative structure.

The announcement by the National Trust on October 19, 2016 was made in partnership with Indiana Landmarks, a national leader on creative funding strategies for the reuse of historic properties. Indiana Landmarks submitted the House of Tomorrow’s nomination to be designated a National Treasure, the first in Indiana. Despite its recognition as a forerunner of both Mid-Century Modern home design and the solar house movement, the House of Tomorrow is vacant and deteriorating.

A HOME FOR THE FUTURE

Designed by noted Chicago architect George Fred Keck, the House of Tomorrow was a popular attraction at the 1933-34 Century of Progress Exhibition, where more than 1.2 million people paid an extra 10 cents to see inside the house. In the depths of the Great Depression, the World’s Fair drew 39 million people to see how advancements in science and technology could improve life across the globe. 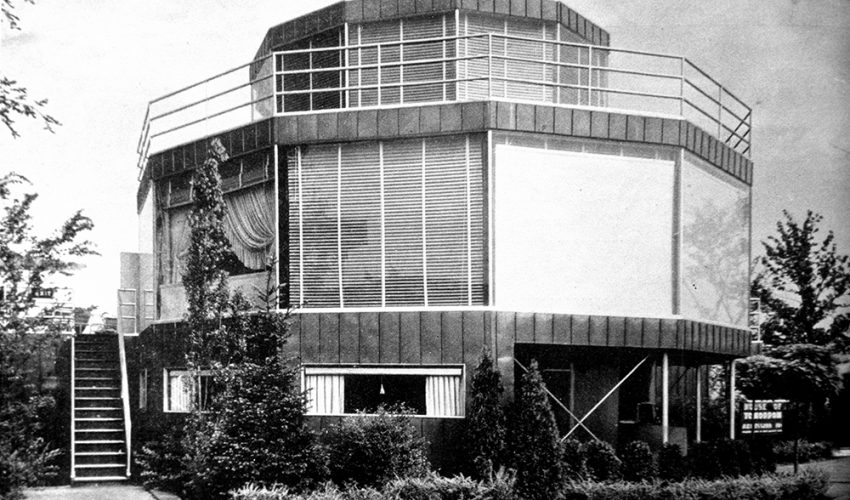 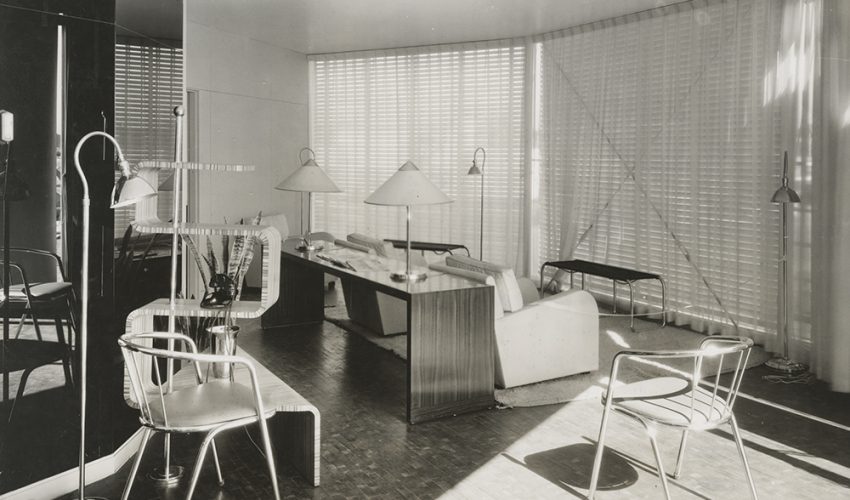 Keck designed the House of Tomorrow “to entirely upset the conventional idea of home” and increase the popularity of modern residential design. He underscored the futuristic theme by showing people a new way to live in what the media called “America’s First Glass House.” The 12-sided, three-story steel-framed structure employed curtain walls of glass and introduced new inventions, and modern conveniences, including central air conditioning,  an “iceless” refrigerator, the first-ever General Electric dishwasher and an innovative open floor plan, all of which Keck believed could improve the quality of daily life for people grappling with the grim realities of the Great Depression.

“At a time when millions of Americans were out of work and the nation was facing enormous economic challenges, the House of Tomorrow was a source of hope for a better future,” said David J. Brown, executive vice president of the National Trust for Historic Preservation. “George Keck’s groundbreaking design, along with futuristic household amenities, reflected a central theme of the Century of Progress — the power of science and technology to dramatically improve people’s lives.”

The House of Tomorrow was among the first residential buildings to employ a glass curtain-wall structure, predating both Mies van der Rohe’s renowned Farnsworth House and Philip Johnson’s Glass House by many years. It was also among the first buildings in America to use passive solar energy as a sustainable heating and cooling technique.

The attached garage — also an innovation — used a door that rose at the push of a button. Keck’s design included one element that remains futuristic — an airplane hangar — also with a push button door — for the small family airplane Keck envisioned every family would own in the future. 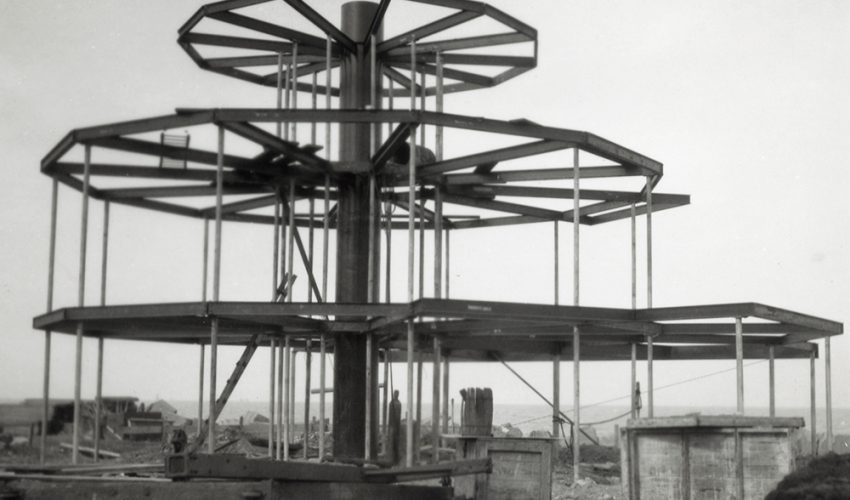 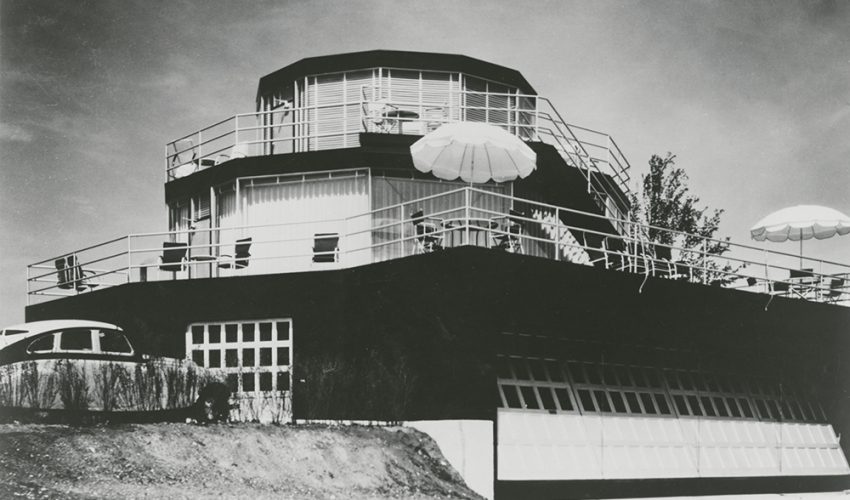 The House of Tomorrow featured attached garages for the family car, and for a small airplane. (Photo: Hedrich-Blessing,Chicago History Museum)
Previous Next

“The House of Tomorrow…is one of the true early monuments of American modernism, brimming over with a uniquely American idealism and earnestness about the twentieth century. George Fred Keck was…interested in casting his net wide and demonstrating how future architecture would present new ideas about technology, about space, about materials. He put all of this together into a whole that is truly one of a kind,” says noted architecture critic Paul Goldberger, a contributing editor at Vanity Fair.

When the fair closed, Chicago developer Robert Bartlett used barges and trucks to ship the House of Tomorrow (along with other Century of Progress structures) to Beverly Shores, Indiana, a town he was attempting to develop as a vacation destination for Chicagoans. Very few structures remain from the 1933-34 fair, which makes the five exhibit houses in Indiana, including the House of Tomorrow, even more important. The exhibit houses were sold and remained in private hands until the land became part of the Indiana Dunes National Lakeshore, a unit of the National Park Service in the 1960s. 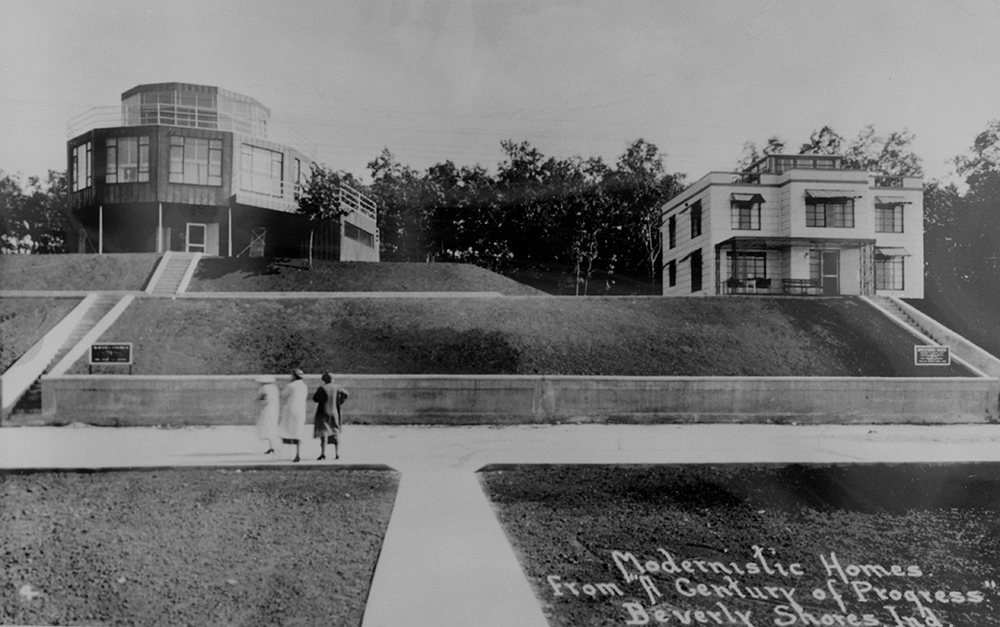 House of Tomorrow and Armco-Ferro House at Beverly Shores.

Saving the House of Tomorrow

Indiana Landmarks is raising money to fully restore the House of Tomorrow, which we are leasing from the National Park Service. We’ll sublease the completed home, made handicapped accessible, for residential use.

“Our goal is to preserve this outstanding building and raise awareness and appreciation of the House of Tomorrow, the architect George Fred Keck, and the Century of Progress, both regionally and nationally, and to raise the money to make this possible” says Marsh Davis, president of Indiana Landmarks. The restoration is expected to cost $2 million. 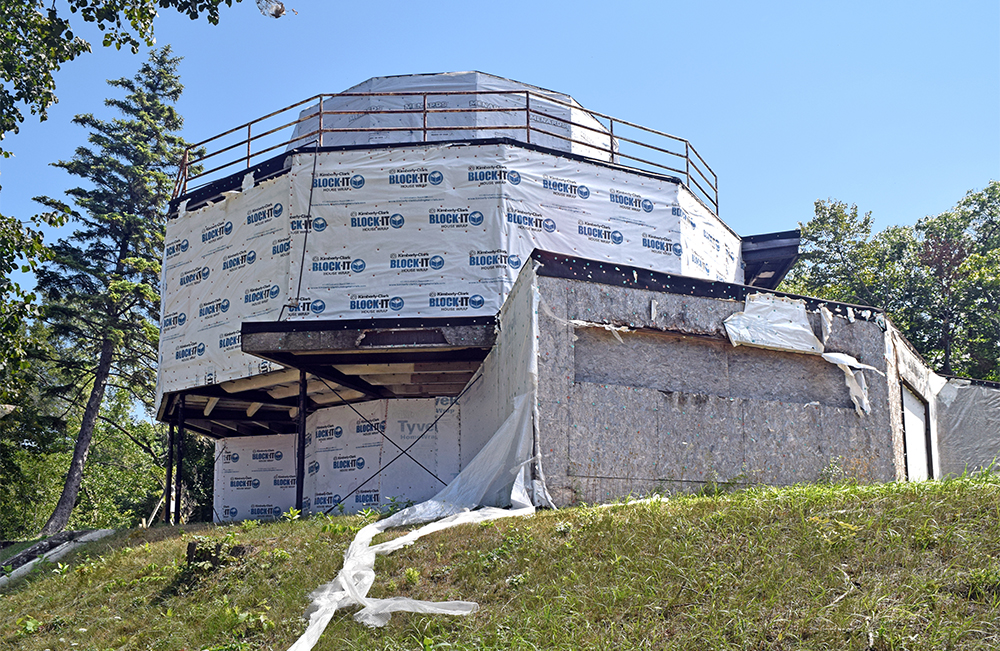 “To guide us through the restoration design process, we have enlisted the services of Chicago architect and former Indiana Landmarks board member Bill Latoza. Although the timetable will depend on fundraising, we hope to get the restoration underway by spring 2017,” Davis said.

The National Treasure designation will raise the profile of the House of Tomorrow and connect us to the Trust’s national network of people who are passionate about Modernist architecture. The Trust brings experience stewarding Modernist masterpieces that used experimental design and construction methods, including the Farnsworth House in Plano, Illinois, and the Glass House in New Canaan, Connecticut.

The restoration will benefit from the National Trust’s H.O.P.E. Crew, which trains young people in preservation crafts while helping to protect historic cultural sites on public lands throughout the United States.

“We’ll need lots of help to restore the House of Tomorrow, a Chicago landmark that happens to live in Indiana,” says Indiana Landmarks’ President Marsh Davis. You can donate to the restoration project here.