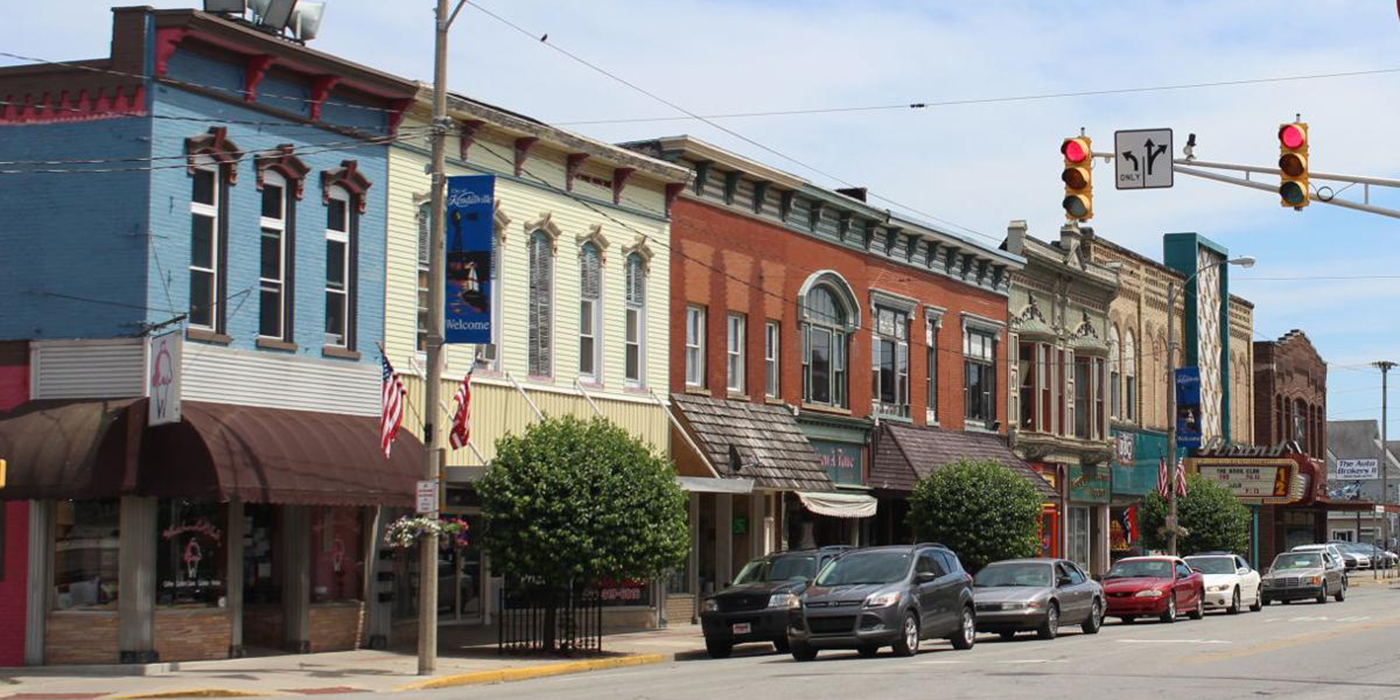 In both Kendallville (above) and Brookville, Indiana Landmarks is working with local Main Street groups and community leaders to create local downtown historic districts, preservation commissions, and design guidelines. PHOTO: Courtesy Experience the Heart of Kendallville
POSTED ON May 2, 2022 BY Indiana Landmarks | News

For communities looking to revitalize their downtowns, the PreservINg Main Street program offers a chance for transformative change. Launched last year by the Indiana Office of Community and Rural Affairs (OCRA), the program aims to spur downtown improvement by giving winning communities a $2 million grant to invest in historic buildings over two years. In fall 2021, Brookville and Kendallville were selected as the program’s two pilot communities.

In partnership with Indiana Landmarks and Indiana Humanities, OCRA created PreservINg Main Street to support historic preservation projects and provide local leadership training to strengthen Main Street organizations, using funding from OCRA’s Community Development Block Grant program. “We were looking at how to create a sustainable preservation ethic while giving communities the tools they need to support investment in the long term,” says OCRA Director of Strategic Initiatives Andrea Kern. “You could see how passionate those in Kendallville and Brookville were about their communities. It was obvious when we toured them that the money invested there would be leveraged well.”

As part of the program, local governments, Main Street groups, and community foundations are required to raise $200,000, money to be split between a permanent revolving loan fund for downtown buildings and funds to help sustain the local Main Street organization.

This spring, Indiana Landmarks began working with local groups Brookville Main Street and Experience the Heart of Kendallville, and city leaders in each community to create local downtown historic districts, preservation commissions, and design guidelines for rehabilitation work on buildings within the districts. Downtown building owners applied for funding from the grant to rehabilitate their building facades, and community leaders chose winning applicants. 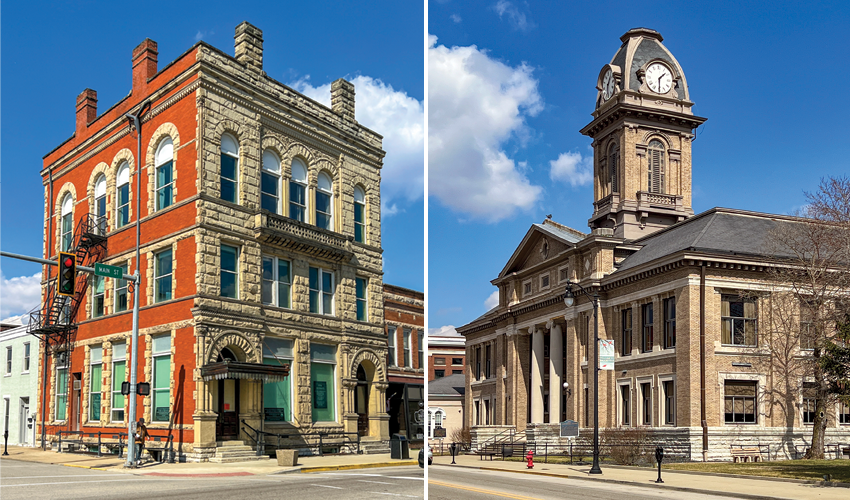 PreservINg Main Street awards $2 million grants to winning communities to invest in historic downtowns. Brookville, one of the program’s pilot communities, plans to build on revitalization in the historic district surrounding the 1859 Franklin County Courthouse (right), hoping to inspire investment in landmarks such as the Farmers Mutual Insurance Building (left). PHOTOS BY JARRAD HOLBROOK

Indiana Humanities provided $20,000 to help Brookville and Kendallville create educational programming to tell the stories of historic downtown buildings in their communities, raising awareness of their importance and the value of preserving them.

“We approached this looking at how we could turn this $2 million into a $4 to $6 million investment in the downtown area, building on the expertise of community leaders and funding resources already in place,” says Main Street Brookville President Brian Noah.

While Brookville’s downtown has attracted new businesses in recent years, 17 commercial buildings in the historic district remain vacant or shuttered. The Town of Brookville and Main Street Brookville hope improvements made in downtown through PreservINg Main Street will encourage further development, including businesses, restaurants, and housing.

“In the last five to ten years, there’s been an intentional effort to revitalize Brookville as the county seat,” says Brookville Town Council President Curtis Ward. “This program will take those successes and amplify them tenfold in a short amount of time, creating a huge impact on the local economy.” 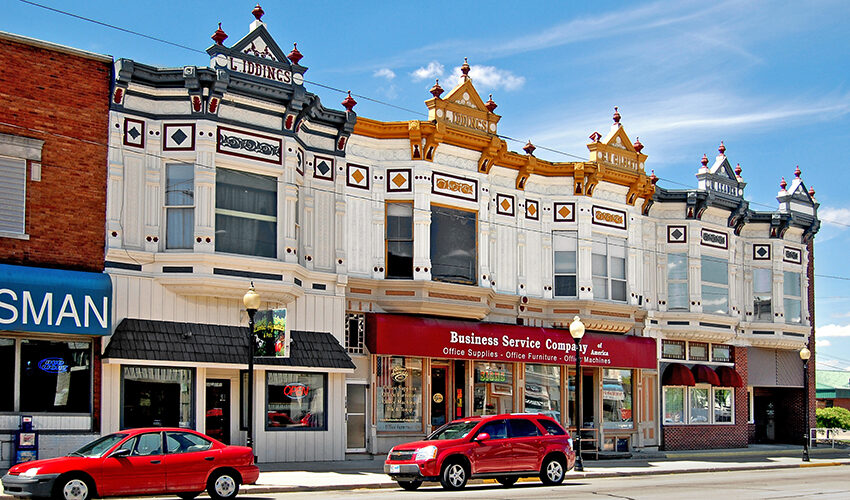 Kendallville has used its historic character to draw visitors and locals to its architecturally rich downtown. PHOTO: Lee Lewellen 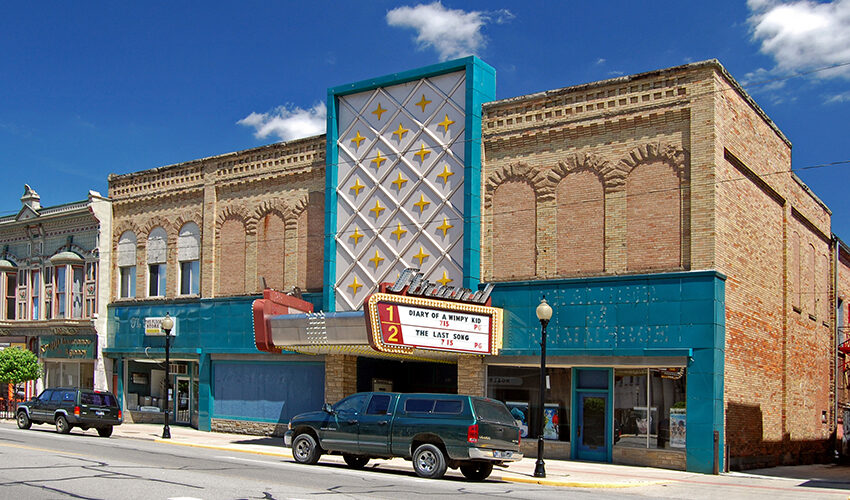 The historic Strand Theatre serves as a commercial anchor in downtown Kendallville, drawing visitors and foot traffic to the surrounding buildings. PHOTO: Lee Lewellen
Previous Next

Similarly, in recent years Kendallville has used its historic character to draw visitors and locals to its architecturally rich downtown, where the Strand Theatre serves as a commercial anchor. Yet the need for investment became evident when 25 building owners applied for façade renovation funding from PreservINg Main Street. To address the demand, Kendallville’s redevelopment commission set aside an additional $300,000 for façade grants to property owners who weren’t awarded money from the city’s PreservINg Main Street distribution. “We’re trying to get the best bang for our buck, talking to investors and trying to do everything we can to make it go as far as it can,” says Experience the Heart of Kendallville Director Kristen Johnson.

“I feel like this is a gamechanger for our Main Street,” adds Kendallville Mayor SuzAnne Handshoe. “I hope this will attract more people to move to Kendallville or visit. I’m excited about the opportunities it will bring.”