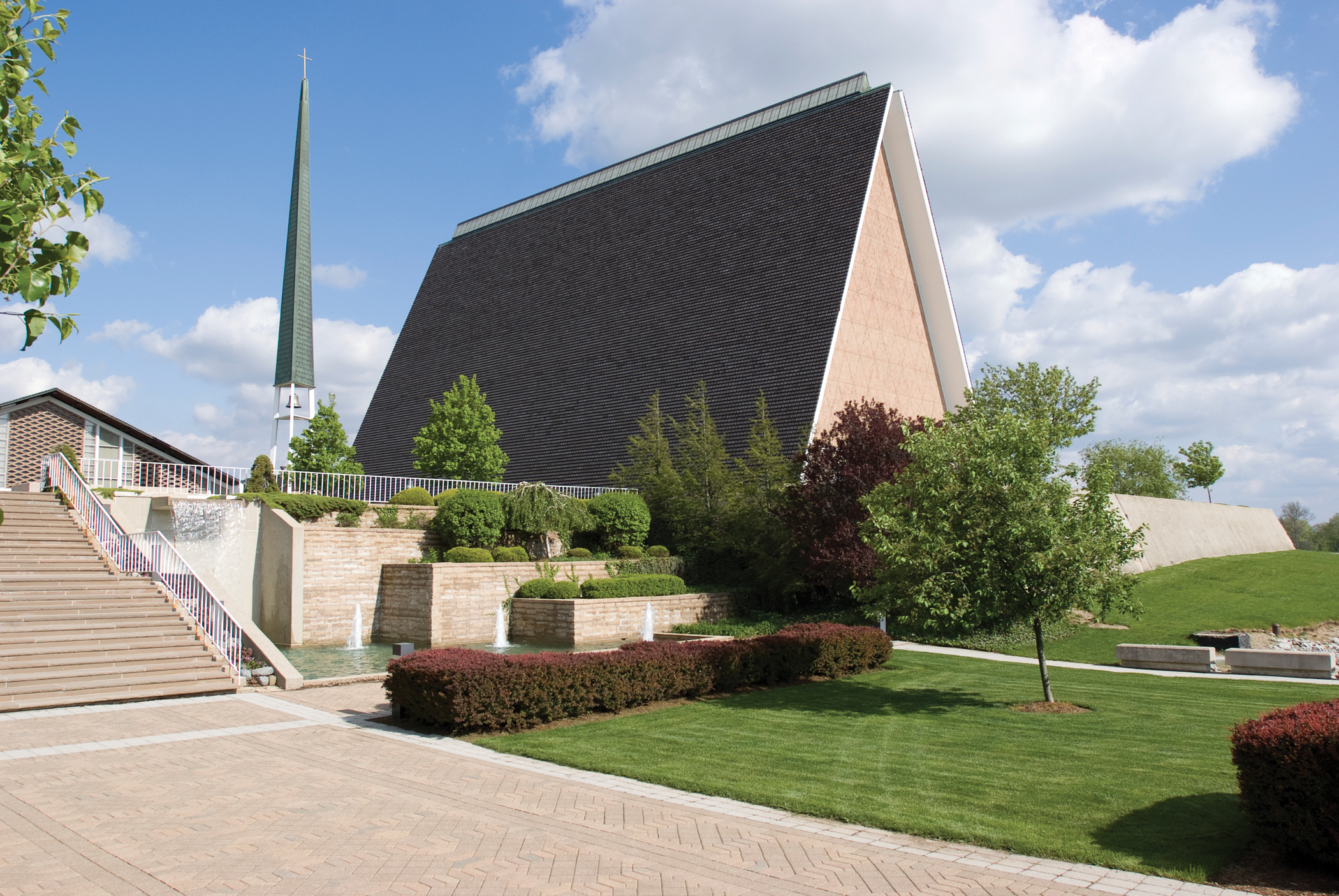 The City of Fort Wayne hired City Beautiful adherent and landscape designer George Kessler in 1912. The city’s Maumee, St. Joseph, and St. Mary’s rivers offered the perfect palette for Kessler, who followed the waterways’ winding routes in designing curving, tree-lined boulevards, parks, and neighborhoods with interesting vistas. On August 27, Indiana Landmarks traces the city’s cultural landscape legacy in our Fort Wayne Experience: From Kessler to Kiley, a day-long exploration that includes talks by experts and tours of significant parks and boulevards designed by George Kessler, Arthur Shurcliff, and Lawrence Sheridan.

The day begins at Concordia Theological Seminary, a standout Mid-Century Modern campus. In the mid-1950s architect Eero Saarinen and landscape architect Dan Kiley had just finished collaborating on St. Louis’s Gateway Arch when they were hired to design the 191-acre Concordia campus. Saarinen designed 28 buildings in clusters centered on a triangular chapel and connected by curving roads near a manmade lake. Saarinen patented a special diamond-shaped brick to create unique façade patterns.

Kiley’s Modernist landscape design framed the built spaces and softened them with allées of honey locust and Oriental plane trees along roadways and wildflower meadows and flowering shrubs bordering open spaces. In recent years, natural threats to Kiley’s landscape—the emerald ash borer infestation and a 2001 tornado that destroyed nearly 800 trees—sent the college back to Kiley for advice. Kiley suggested bringing in mature trees from Michigan, Indiana, and Ohio to patch holes and, in some cases, substituting trees from his original design with replacements better suited to the environment. “This is a magnificent example of the collaborations between Saarinen and Kiley,” says Rev. Robert Roethemeyer, vice president of strategic planning and mission execution at Concordia, who will lead a walking tour of campus.

After lunch, participants will board a bus to travel along Kessler-designed boulevards, and see the park-like Wildwood Park and Indian Village neighborhoods developed by his successors Arthur Shurcliff and Lawrence Sheridan. Alec Johnson, a superintendent for Fort Wayne Parks and Recreation, will provide an insider’s view of the system, with stops at Lakeside Park, Foster Park, and Headwaters Park.

To beautify an area prone to flooding by the St. Joseph River, Henry Doswell designed Lakeside Park in 1912 with features that include a concrete pavilion, footbridges over lagoons, and a sunken garden with classical pergola. Landscape designer and horticulturist Adolph Jaenicke, parks superintendent from 1917 to 1948, saw Lakeside as a place where the public could learn about design and nature, and directed the planting of hundreds of varieties of roses in the sunken gardens and along the pergola and reflecting pools. Named a National Rose Garden in 1928, the site remains a showplace. 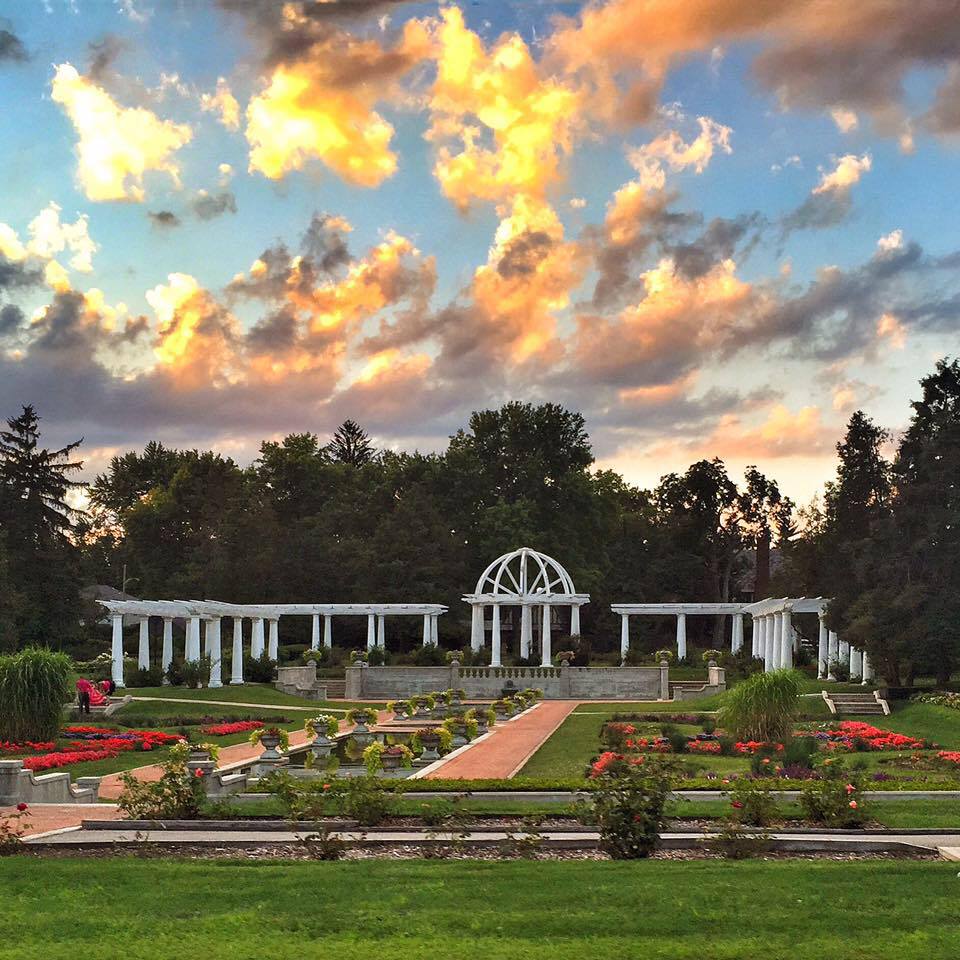 Around the same time Lakeside Park was established, Park Board President Colonel David Foster and his brother Samuel Foster donated 67 acres for a park along St. Mary’s River. David Foster’s aspirations for his city included a park within 10 minutes of every home in Fort Wayne. Foster Park’s historic features include pavilions, the city’s first public golf course, and a 1928 footbridge over St. Mary’s River connecting it with Indian Village Park.

Our Fort Wayne Experience ends with a stop at Headwaters Park, the newest addition to the system. In his 1912 plan, Kessler specified the creation of a downtown park to help absorb flood waters from St. Mary’s River. His idea finally came to fruition in the late ‘90s when Headwaters Park opened in a thumb-shaped parcel of land in a bend of the river.

“It doesn’t look like a Kessler-designed park, but it shows you how a vision can be coordinated and nurtured over time,” says Julie Donnell, Indiana Landmarks board member and chair of our cultural landscape committee. “I hope people come away with an understanding of the richness of Indiana’s landscape heritage and our part in the American landscape story.”

Fort Wayne Experience: From Kessler to Kiley is co-sponsored by Indiana Landmarks and Concordia Theological Seminary, with coordination from Indiana Landmarks’ Cultural Landscape Committee. Tickets are $75 per Indiana Landmarks member, $85 for nonmembers. The fee covers talks, lunch, and bus tour, though you must get to Fort Wayne on your own. Buy tickets online at fortwayneexperience.eventbrite.com or call 317-639-4534.