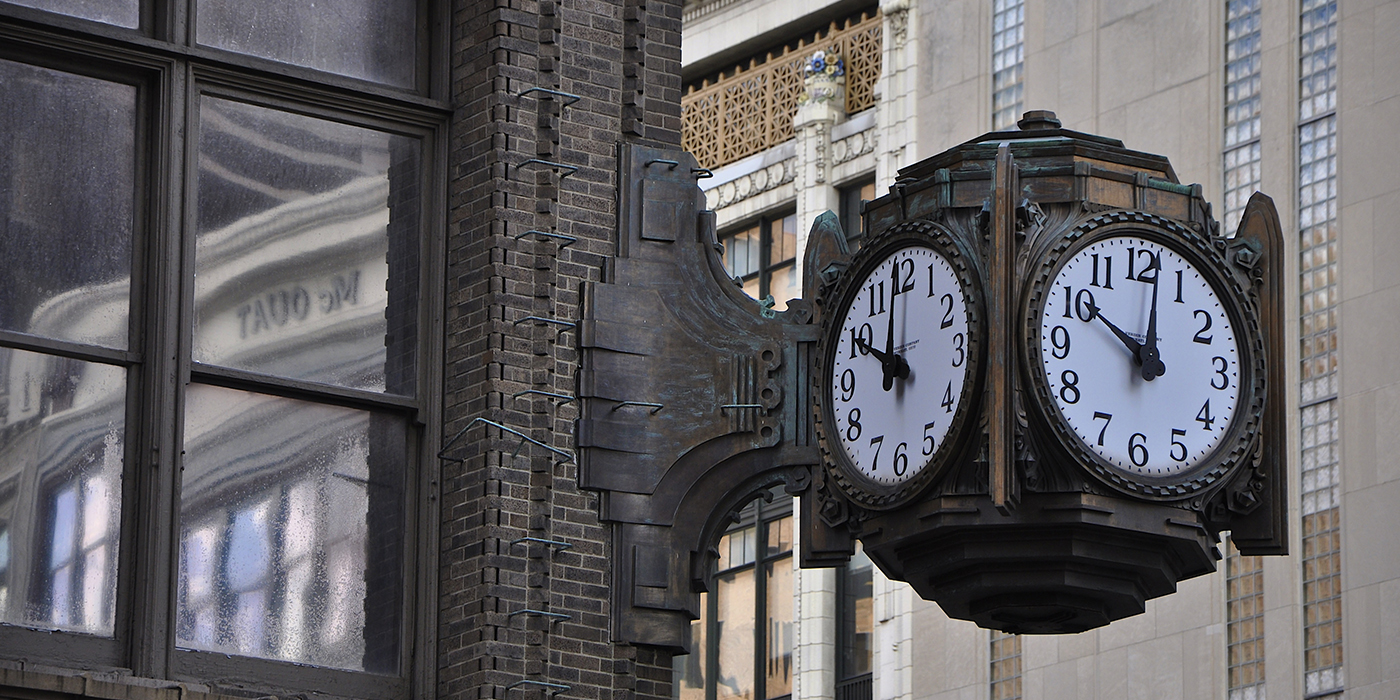 We invite the public to join Indianapolis Mayor Joe Hogsett for the ceremonial start of the repaired Ayres Clock on Sunday, November 20 at noon. You’ll get a commemorative postcard, and we hope you’ll stay to be in the community photo we’ll shoot under the clock for the National Trust’s THIS PLACE MATTERS campaign.

You can also stroll a few paces down Washington Street to see the names of the 348 donors who contributed to the campaign as of October 26, 2016 displayed in a Carson’s window. After the THIS PLACE MATTERS photo shoot, Carson’s invites “clock people” to enjoy hot chocolate in the store.

Indiana Landmarks hoped to raise $20,000 by November 7 to restore the 10,000-pound Ayres Clock at the southwest corner of Washington and Meridian streets in Indianapolis. Then we discovered that the clock was originally lit from within, and that the bronze case needs repair and cleaning, so we increased our goal to $60,000 for restoration and to create a maintenance fund, which we reached on October 26!

While the clock will run properly beginning November 20, repair and cleaning of the bronze case will have to wait until spring. We’ll let you know when that project is underway.

No one quite remembers how long the clock has been completely out of order, but for a while now it’s been right eight times a day, since it has four faces and none displays the correct time!

Two Indiana Landmarks members—Mary Kummings and Paul Smith—asked us if we could get the beloved clock working again. We shared their enthusiasm to restore a civic landmark that was so important in lives of people in the city for decades. For generations, people met under the Ayres clock to go shopping, or to lunch or dinner.

Vonnegut and Bohn designed the 1905 Ayres department store, and in 1936 Arthur Bohn designed the bronze clock. Positioned nearly 29 feet above the sidewalk, the eight-foot tall clock gave passersby the time from all four directions — when it worked.

Our goal was to repair the clock before the bronze cherub comes to perch on the clock on Thanksgiving eve — an annual holiday tradition since 1947 — so we didn’t have much time. We launched the campaign on October 5 and reached our expanded goal of $60,000 on October 26.

The clock repair by Smith’s Bell and Clock Company will cost around $14,000, including four new faces that replicate the 1936 originals, and repair of the electrical system that lights the faces from within.

A worker in a lift inspecting the clock found an unsecured nine-inch bronze detail that could have fallen on a pedestrian’s head, so we’ll also spend around $20,000 clean and repair the bronze case, and enlarge the maintenance fund to ensure both annual clock cleaning and repair and periodic cleaning and conservation of the bronze case and cherub.

Many still call it the Ayres clock, even though the department store has been gone since 1992. The city owns the building, which is incorporated in Circle Centre mall. Carson’s occupies a portion of the old Ayres building.

Jeff Bennett, Indianapolis Deputy Mayor of Community Development, applauds the citizen campaign to repair the landmark clock, promising that the city will expedite the permits we’ll need in order to get repair work done in time for the cherub’s arrival. 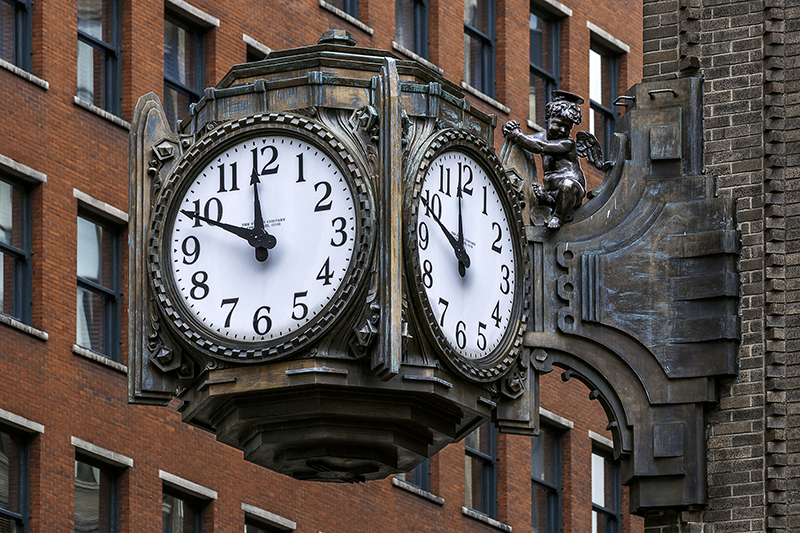 The bronze cherub appears on the Ayres clock each Thanksgiving eve, to keep an eye on shoppers during the holiday season. (Photo: Lee Mandrell)

Thanks! to Mary Kummings and Paul Smith who took the initiative to ask Indiana Landmarks for help to fix the Ayres clock, and to all who contributed to the grass-roots civic campaign.

In honor of his parents Vickie and Herb
Rev. Phillip Hucks

In honor of Diane Sewall Howard
Bob and Marlys Sewall

In honor of Mary Kummings and Paul Smith, who asked Indiana Landmarks for help to restore the clock
Anonymous

In honor of Mary and Stan LaBuz
Mr. Jonathan Labuz

In honor of Mark and Dona Landrum
Mr. Jordan Landrum

In honor of Allen Mackey
Mr. and Mrs. Larry Mackey

In honor of Johnny Newby
Mr. and Mrs. David Wise

In honor of Dorothy and Emmet Wilder
Mr. Joseph Powers

In honor of Gene and Virginia Wilkinson
Mr. Robert Wilkinson

In memory of Floyd and Lucille Andrews
Mrs. Jennifer Miller

In memory of Tom and Marge Beaven and Johnny and Ann Hutchings
Mrs. Jackie Hutchings

In memory of Bob and Anne Crouch
Mr. David Crouch

In memory of Mrs. Robert C. Graham
David B. Graham

In memory of Bill and Vivian Gommel
Ms. Ruth Williams

In memory of George and Rosemary Hamilton
Ms. Rosemary Rodgers

In memory of Barbara B. Harger
Ms. Elizabeth J. Harger

In memory of Robert and Sybil Henderson
The Honorable Robert F. Henderson, Jr.

In memory of Weldon and Nita Johnson
Mrs. Kathy Thurston

In memory of Paul and Beatrice Krupp
Mrs. Patricia Simon

In memory of Grace McCombs
Jan and Bill Stewart

In memory of Merrill and Margaret Deer
Mrs. Judith Borron

In memory of Deane and Caroline Pinney
Dr. and Mrs. Neil Pinney