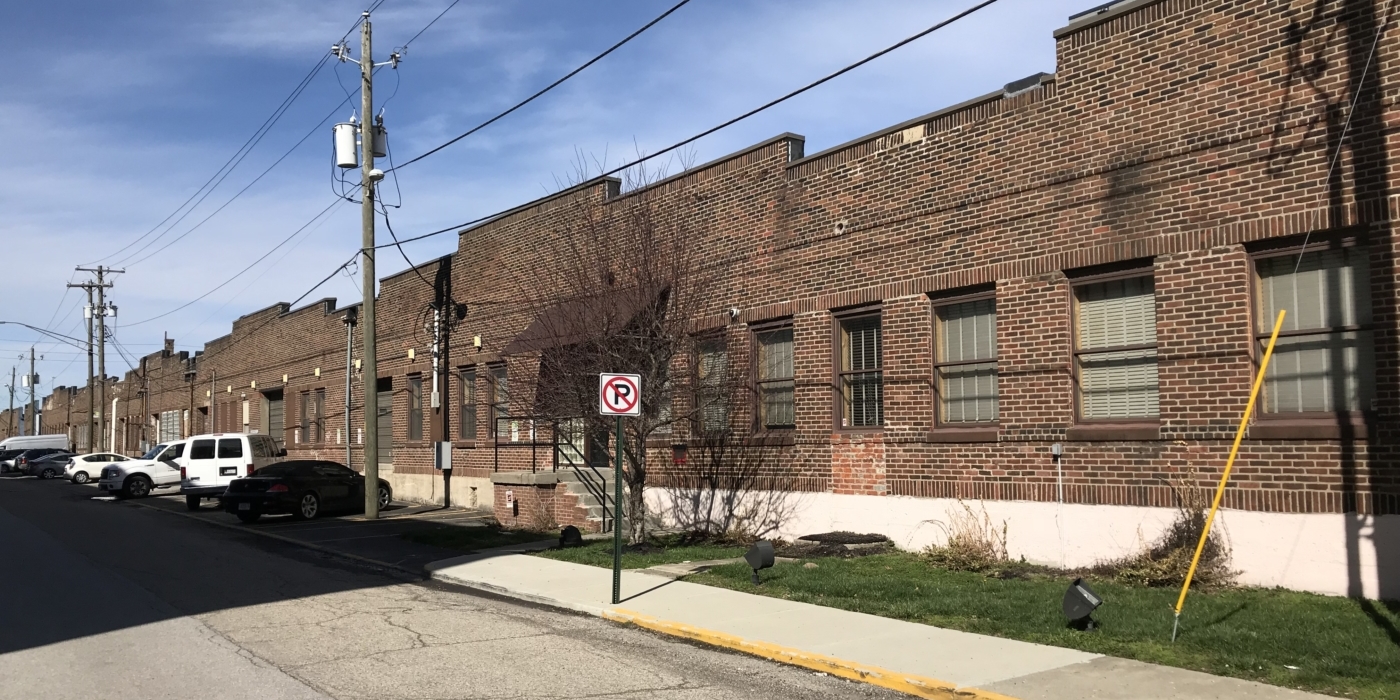 Indiana Automotive member and car collector Shawn Miller is no stranger to the Mass Ave district in Indianapolis, having lived or worked nearby for decades, even housing some of his antique cars in what is now the Blumlux building when he first began his collection. But Miller recently uncovered a story that was new to him, the history behind an unassuming long, one-story warehouse on the east side of Fulton Street (just off Massachusetts Avenue, between North and St. Clair streets). 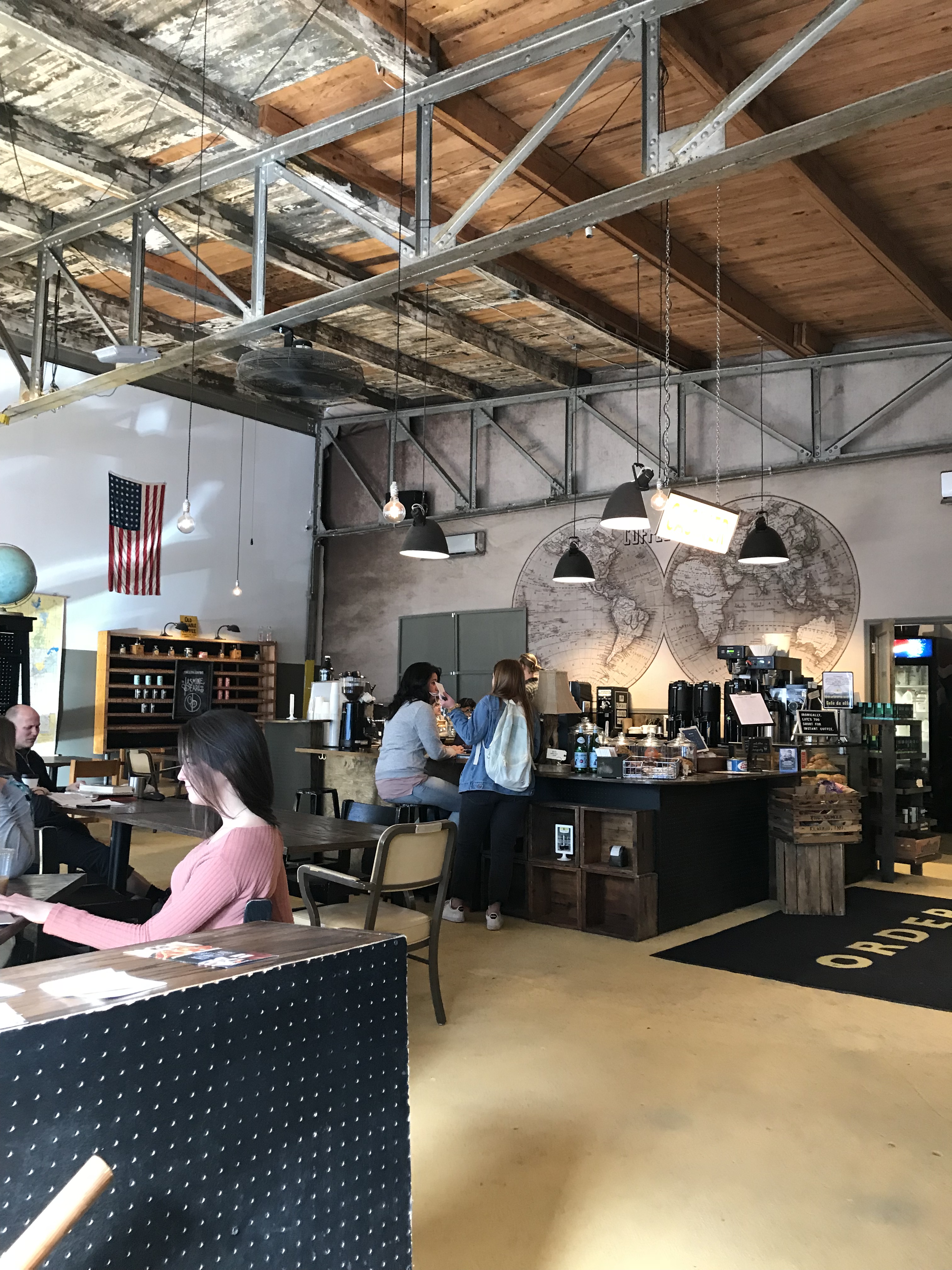 The building had been leased to the Barry Company for decades and existed rather quietly until the construction of the Circa Apartments created an appealing environment for small businesses, like Kaffeine Coffee, Reclaimed Vintage Industrial, and others that have since leased storefront spaces. Miller’s look into the building’s history began with a call from Martin Sinzig of Switzerland, a Chevrolet historian interested in learning more about one of Miller’s cars – the Scripps Booth DaVinci, a one-off prototype built by Louis Chevrolet in his Indianapolis shop (alas, demolished) on West 10th Street.

“Martin is a Chevrolet historian with several books to his credit. We met and talked about the car and what I knew of the history of its build by Chevrolet, and we ended up becoming fast friends. On a subsequent visit Martin mentioned he had compiled a list of all the known addresses of Louis Chevrolet and asked if I would help him locate the structures. Of course, I jumped at this chance and we spent a sunny afternoon driving all around downtown.” 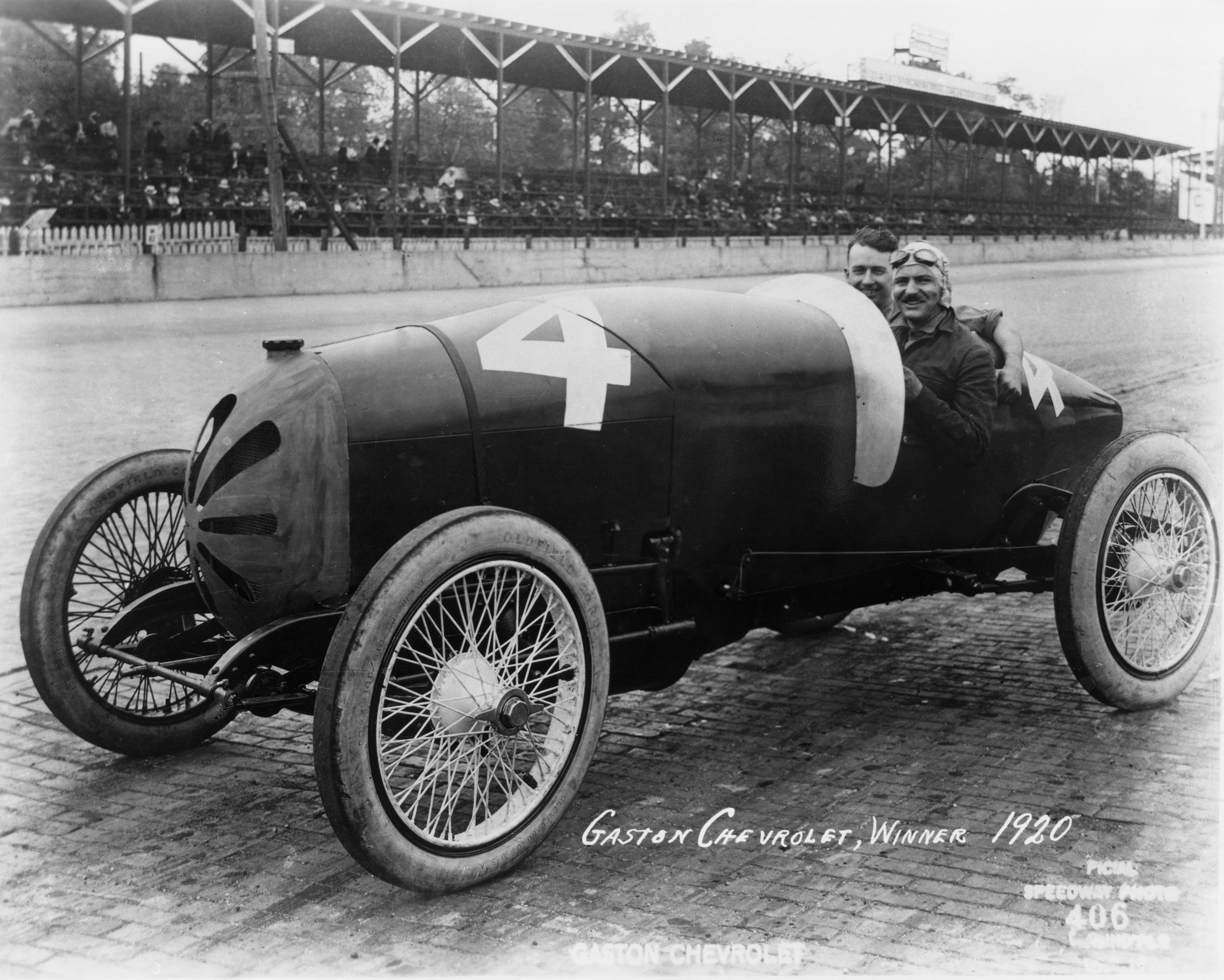 To Miller’s surprise the first stop on Sinzig’s list was the warehouse at 705 Fulton Street, former site of the Chevrolet brothers’ racing shop and now Kaffeine Coffee. The Chevrolet brothers – Louis, Arthur, and Gaston – were quite successful in early ’20s Indy car racing. In fact, Gaston Chevrolet won the 1920 Indy 500 in a Monroe Special, the first American car to win the 500 since 1912. Gaston was also the first driver and car to win without a tire change. The brothers had a total of seven cars entered in 1920 – four Monroes and three Frontenacs. Tragically, Gaston was killed in a racing accident later that year in Beverly Hills, California. Beginning in 1922 their Frontenac Heads (rather exotic performance parts fitted often to the ubiquitous Ford Model T engine) were commercially successful and even powered their racing cars.

Miller explained that the process of getting a car built and to the track in the ’20s was much different than today. “Back in those days the race cars were built in racing shops around town and actually driven to the track in many cases. This would require test runs on the local streets surrounding the shop. At the time, Fulton was more of an industrial block than a residential one, so I guess this wasn’t too big a deal. Still, the thought of a race car thundering up Fulton to St. Clair, over to Noble Street (now College Avenue), down to North, and back onto Fulton makes my mind race.” 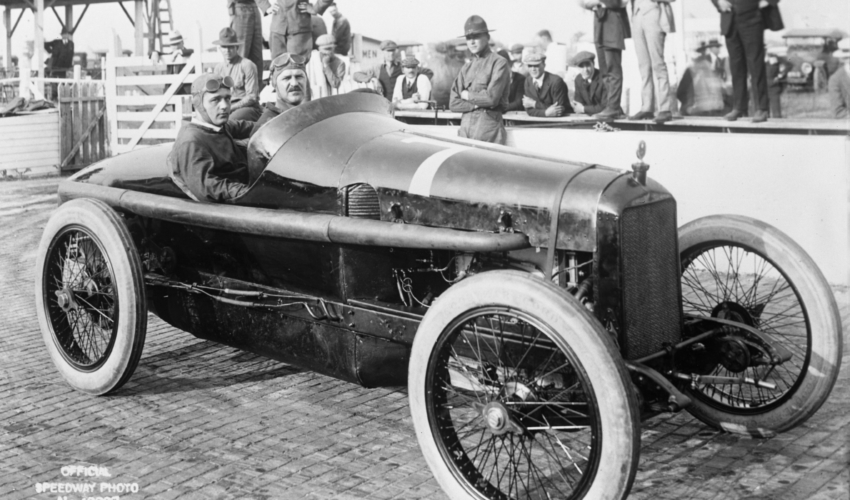 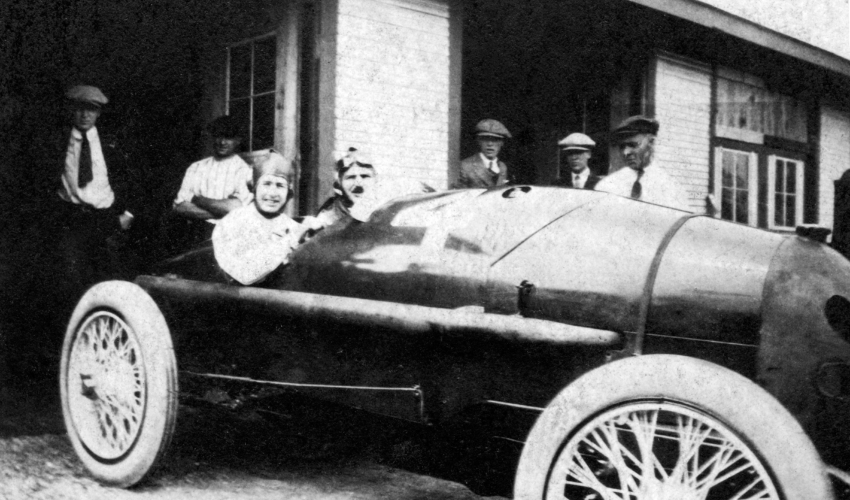 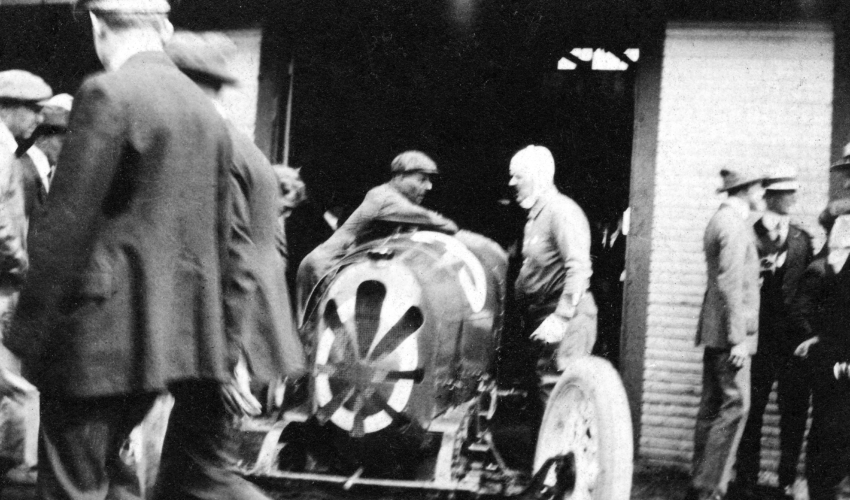 Checking the Standard Catalogue of American Cars, Miller discovered the Monroe Automobile (formerly of Flint, Michigan and heavily influenced by William C. Durant) was built in Indianapolis beginning in 1918 after the company was purchased out of bankruptcy by the William Small Company, the Monroe sales agent for Indianapolis. Ironically, Mr. Small hired Louis Chevrolet (who had no love lost for his former boss Mr. Durant) as a consulting engineer to his company.

Mr. Chevrolet’s role in the Monroe car was limited, but he was allowed to use the Small manufacturing facilities to build his seven race cars. In August 1920 the Small Company went into receivership, so the win in the 500 came too late to change the fate of the Monroe, which ceased production in 1923. 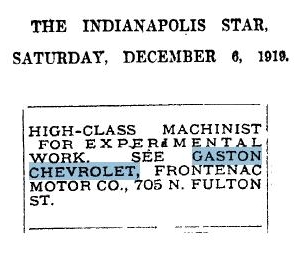 Though little history survives of the race shop at 705 Fulton, based on a 1919 advertisement Miller believes it must have been built between 1915 and 1919. “Given the Standard Catalogue information, which I trust implicitly, I assume this building was built to house the William Small Company, or it was an early tenant.” 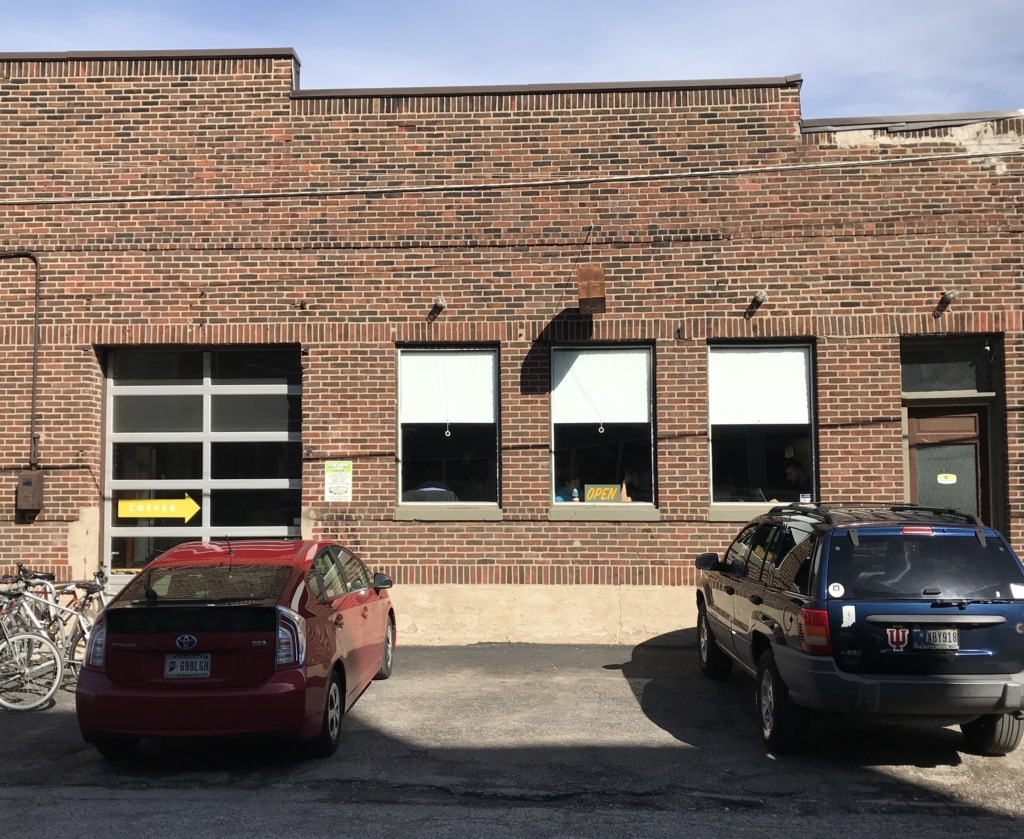 “The building appears to be a spec rental industrial building – sort of a forerunner to the industrial park concept so common today. Constructed of brick over a concrete foundation, it has numerous ‘storefronts,’ each of which has a loading dock as well as a pedestrian entrance. I am uncertain if the entire structure was built at once or in phases. The brick and parapet design elements all match, however, so if it wasn’t built at once, it was completed in short order. It has a flat shape because it occupies the entire block formed by the diagonal run of Davidson Street to the rear, which also appears to have had a rail spur running along the building. This gives us a glimmer of distribution and manufacturing business needs in the late teens and early ’20s, with rail access at the rear of the building for bulk deliveries and loading docks and pedestrian entrances at the front for retail sales and pickups,” Miller adds.

Shawn Miller says his drives past this building on Fulton are forever changed, and he is glad to see the block getting more traffic with new tenants. “Next time you are in Kaffiene Coffee, listen closely and see if you can hear an engine roar.”

Special thanks to Shawn Miller for his contributions to this article. You can read more about Indiana Automotive, an affinity group of Indiana Landmarks, at indianalandmarks.org/indiana-automotive.