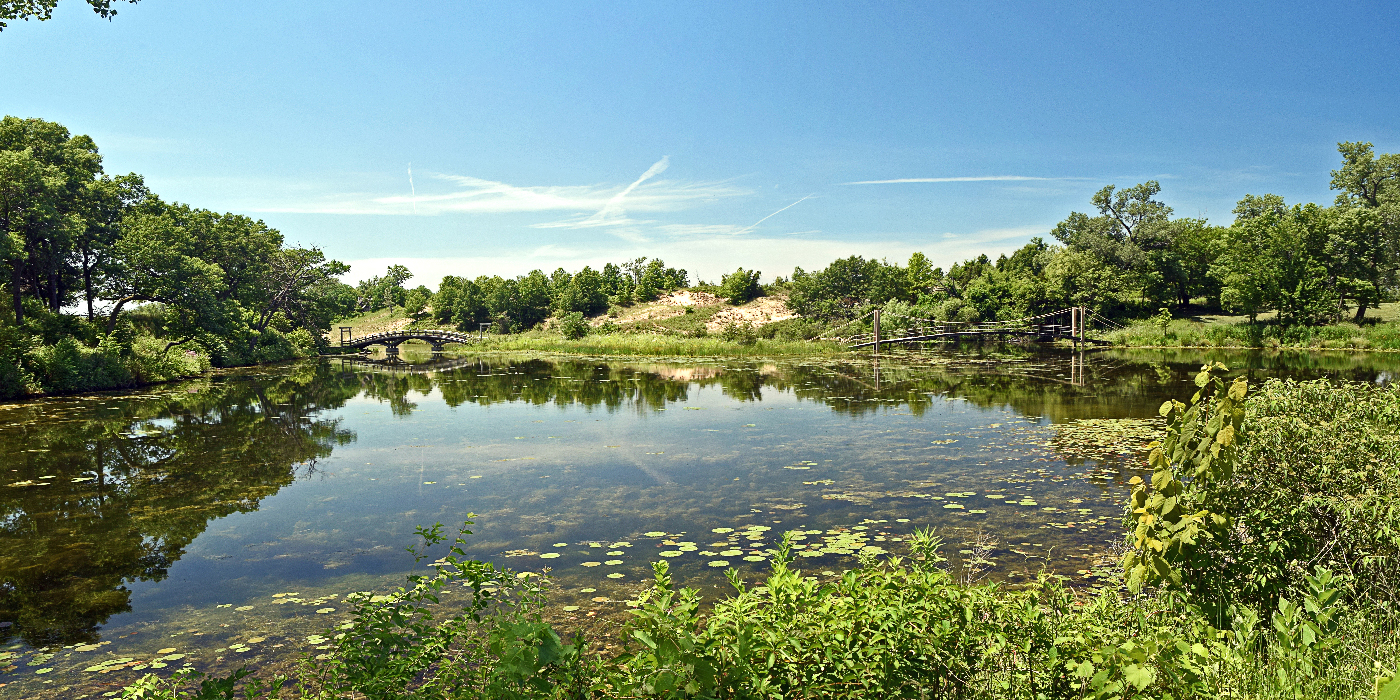 Think of Indiana’s 46-mile sliver of Lake Michigan’s shoreline, and most people envision smoke stacks rising from the dunes and, on a clear day, maybe Chicago’s not-so-distant skyline on the horizon. But Gary’s Marquette Park offers a different picture — a serene landscape with rolling dunes and rare black oak savannas, complete with picturesque lagoons.

The landscape of the park serves as a microcosm of Gary’s storied past, beginning with the untouched dunes of the Calumet, to the ascendance of an industrial giant, and into the city’s decline. Restored in 2009 with a $28 million grant from the state’s Regional Development Authority, in more recent years the park has become a symbol of regional renaissance.

Like most projects in Gary, Marquette Park originated during U.S. Steel’s development of the city starting in 1906. After the city annexed the nearby town of Miller in 1918, U.S. Steel purchased nearly 120 acres on the lake and donated it to the city for use as Lake Front Park, a recreational and leisure space for the thousands of workers at the steel mill next door. Gary renamed the park in 1932 to honor French Jesuit missionary Pere Jacques Marquette, who with Louis Joliet, made the first European descent of the Mississippi River and camped near the south end of Lake Michigan in 1675. A statue of Marquette, sculpted by Henry Hering and restored in recent years, greets visitors at the park’s entrance. 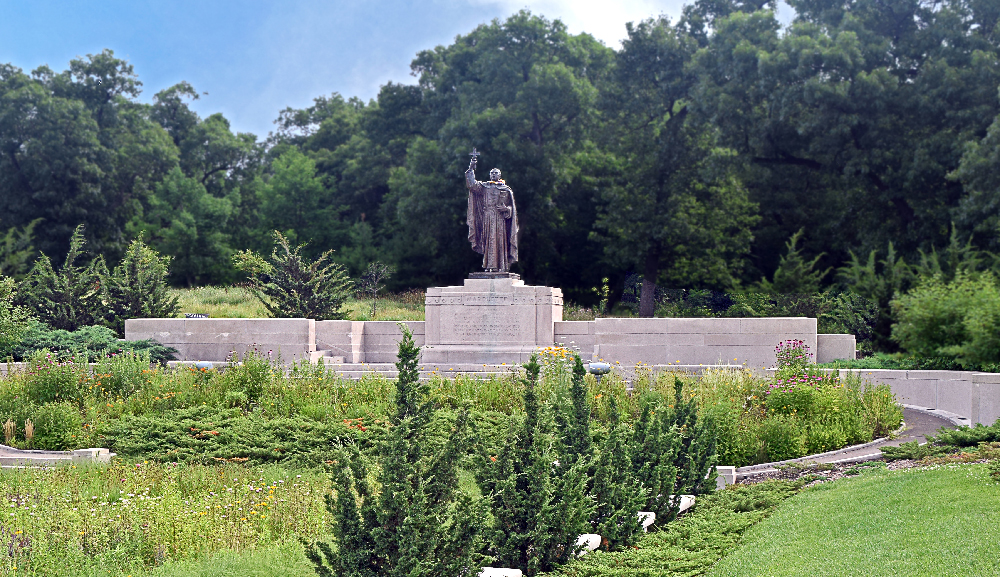 A 1932 statue of Father Marquette welcomes visitors along one of the park’s winding roads. The statue was restored in 2010 with funding from the Efroymson Family Fund at the Central Indiana Community Foundation, Indiana Landmarks, and the Regional Development Authority. (Photo: Lee Lewellen)

Maher masterfully blended Neoclassical and Prairie architectural styles in his design for the Bathing Beach Pavilion, one of the park’s first buildings. The architect also experimented with pre-cast concrete for the project, spec’ing T-shaped interlocking blocks – a forerunner to modern concrete block construction.

The pavilion marked the gateway to the beach for most of Gary’s working families, but not for all. Just like city parks and certain neighborhoods, Marquette Park was a segregated space; African American residents were not allowed entry. In 1949, Rev. Lester Jackson organized demonstrations at the bathing pavilion to desegregate the park. The city council did not change the policy of segregation at city-owned parks until 1954. 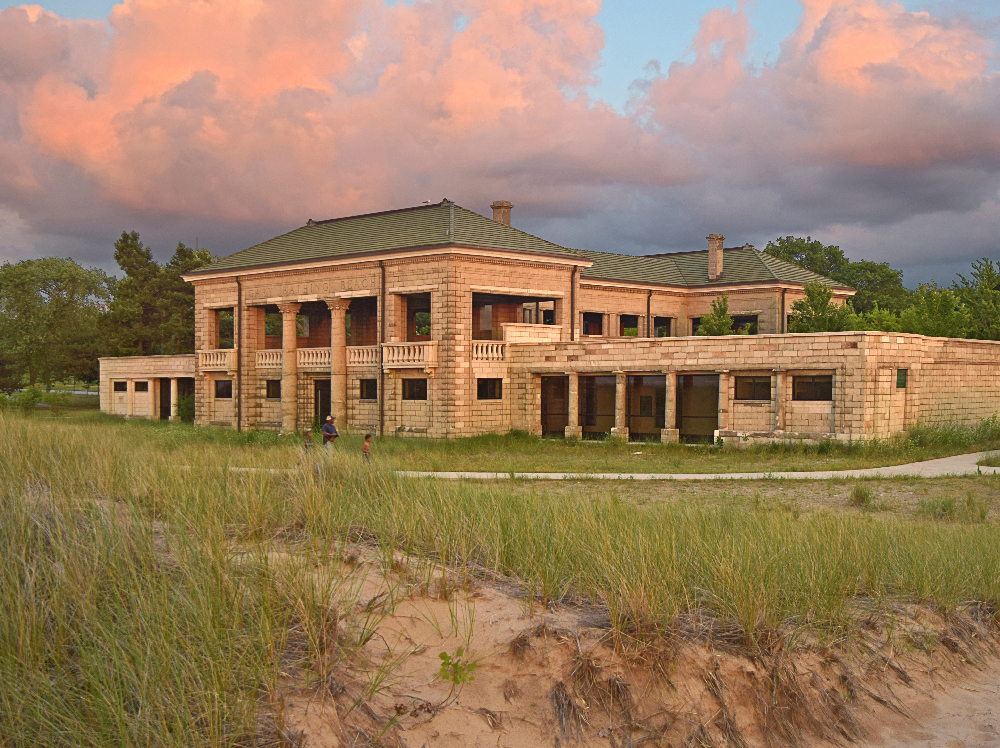 As Gary’s economy declined beginning in the late 1960s, so did its largest park. The Bathing Beach Pavilion closed in 1971, suffering years of neglect and damage from the harsh climate along Lake Michigan. In 1991, locals organized the Society for the Restoration of the Gary Bathing Beach Aquatorium and Octave Chanute’s Place in History. The group, now known as the Chanute Aquatorium Society, renamed the building to the Aquatorium in 1997 during a complete restoration that transformed the former bathhouse into an events center and museum space. Today, exhibits commemorate Octave Chanute — a French aviation pioneer who flight-tested his craft from the Gary dunes years before the Wright brothers’ flight at Kitty Hawk — and the Tuskeegee Airmen, a World War II-era African American U.S. Air Force squadron that trained at Chanute Air Force base in Illinois. 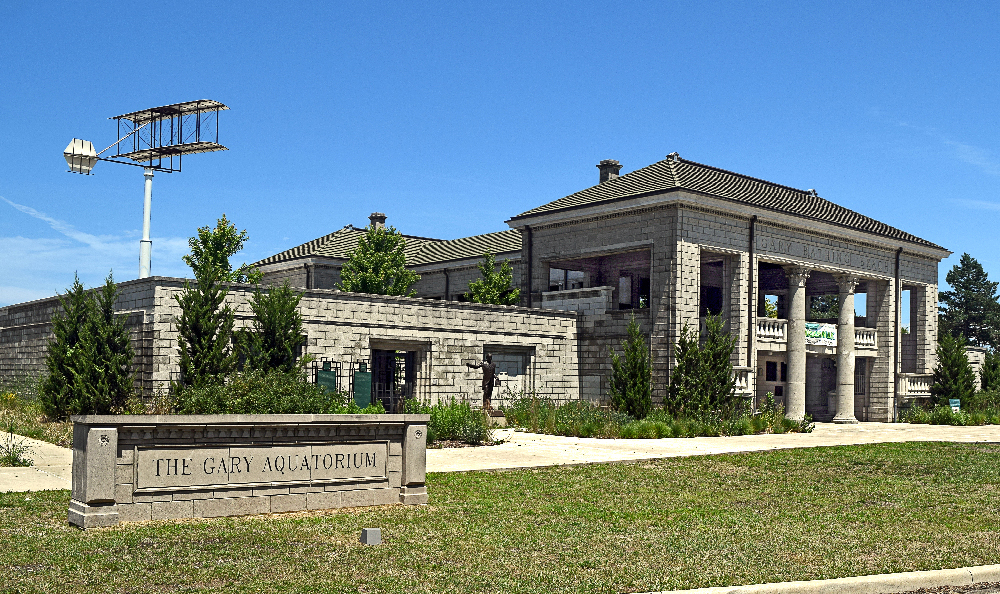 A replica glider and restored P-51 Mustang flank the entrance to the Aquatorium in homage to the pioneering endeavors of Octave Chanute and the barrier-breaking service of the Tuskegee Airmen, several of whom hailed from Gary. (Photo: Lee Lewellen)

Maher’s design for the nearby Recreation Pavilion in 1924 took a different form, integrating elements of both Prairie and Italian Renaissance architectural styles. The pavilion fits in with the sweeping dune landscape, while incorporating classical elements designed to impressed the upper echelons of Gary’s social elite, who used the space for weddings, dances, and civic functions. The city now operates the Pavilion as an events venue and community meeting space. 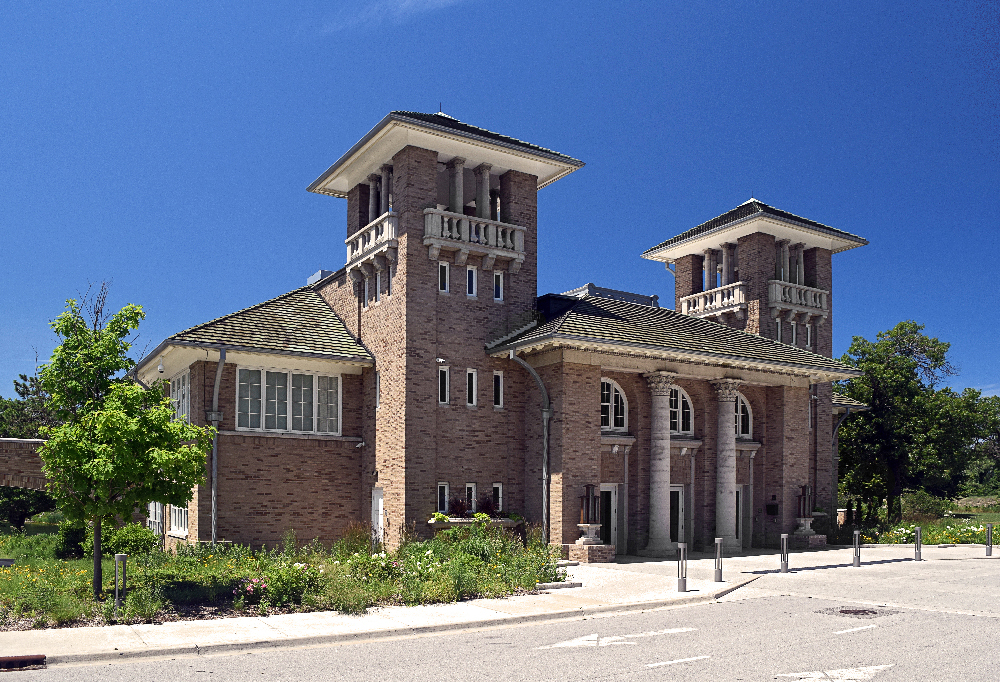 A walk – perhaps a paddle – behind the pavilion promises beautiful views of the lagoon and an array of wildflowers across Patterson Island, a 1935 Works Progress Administration addition.

Today, the 200-acre park is impossible to take in all at once, encouraging visitors to return again and again to explore its paths, beach, and classical architecture set in artful landscapes.

To learn more about Marquette Park, visit http://www.marquetteparkgary.com, or better yet, check it out in person.