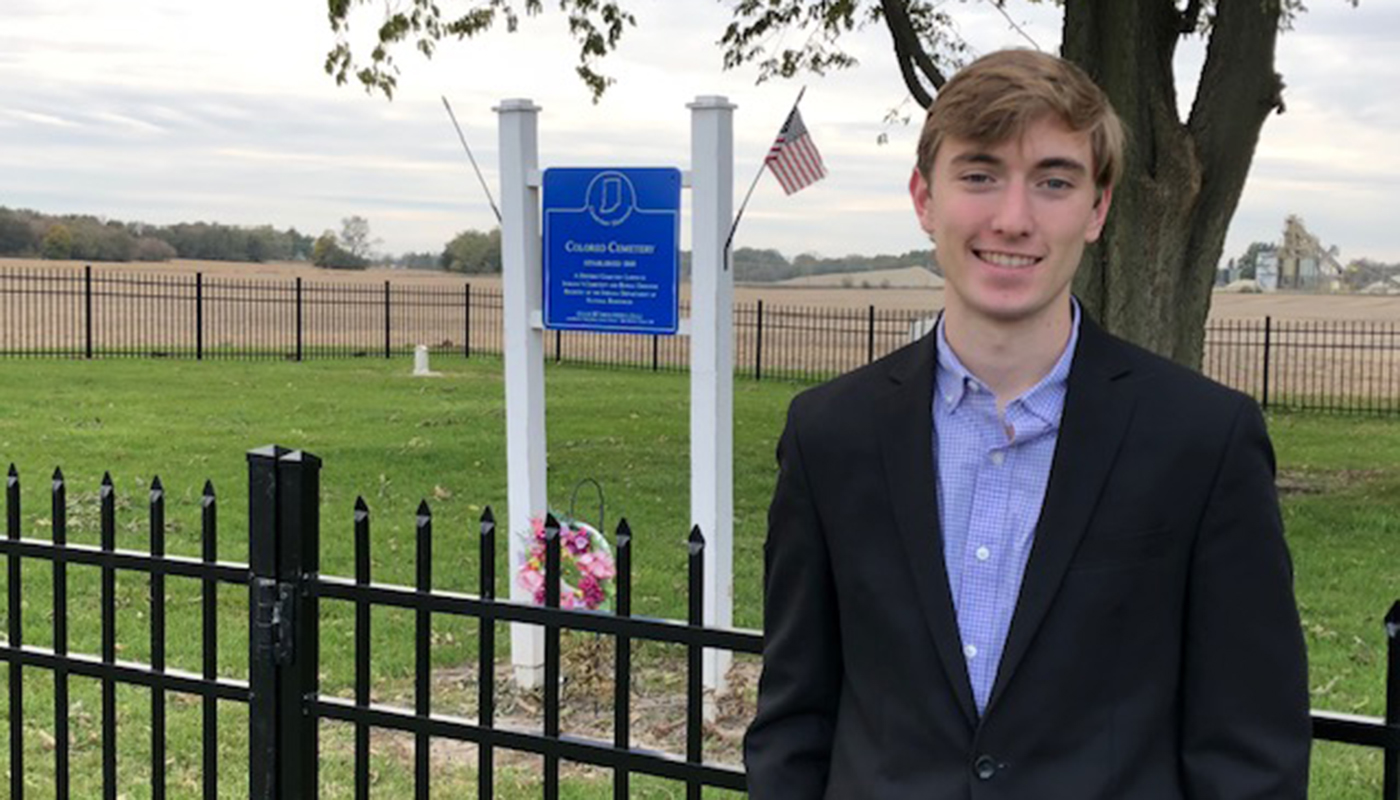 In 2016, a diminutive sign on a wooden post reading “Colored Cemetery, est. 1836” and four unremarkable gravestones near a farm field in Thorntown offered the only hint of the site’s history as a final resting place for the community’s early African American residents. Today, a decorative fence surrounds restored gravestones, and a new marker offers deeper interpretation of the cemetery’s heritage.

For restoring the cemetery and bringing wider attention to its story, Reece Thompson earned Indiana Landmarks’ 2020 Sandi Servaas Memorial Award. Reece is one of two recipients of the award this year. The winners receive a $1,000 prize and the original sculpture “No Doors to Lock Out the Past” by Evansville sculptor John McNaughton.

As a high school sophomore in 2016, Reece was looking for an Eagle Scout project when he recalled a local newspaper article about the Thorntown Colored Cemetery. Just after the Civil War, members of the local Quaker community purchased the cemetery’s ground to provide a resting place for the town’s Black residents, who were not allowed to be buried within city limits. Today, the Thorntown Colored Cemetery is Boone County’s only known African American cemetery, and one of the only tangible connections to the community’s Black heritage. 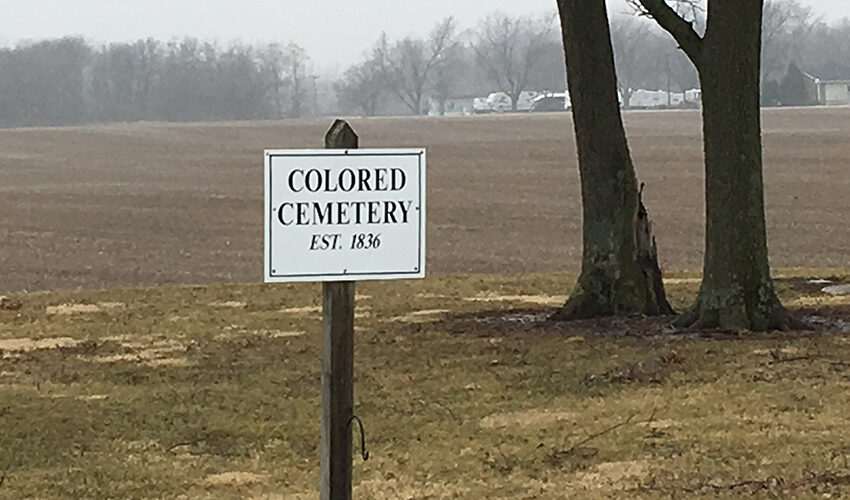 In 2016, this diminutive sign four unremarkable gravestones near a farm field in Thorntown offered the only hint of the site’s history as a final resting place for the community’s early African American residents. (Photo courtesy Thompson Family) 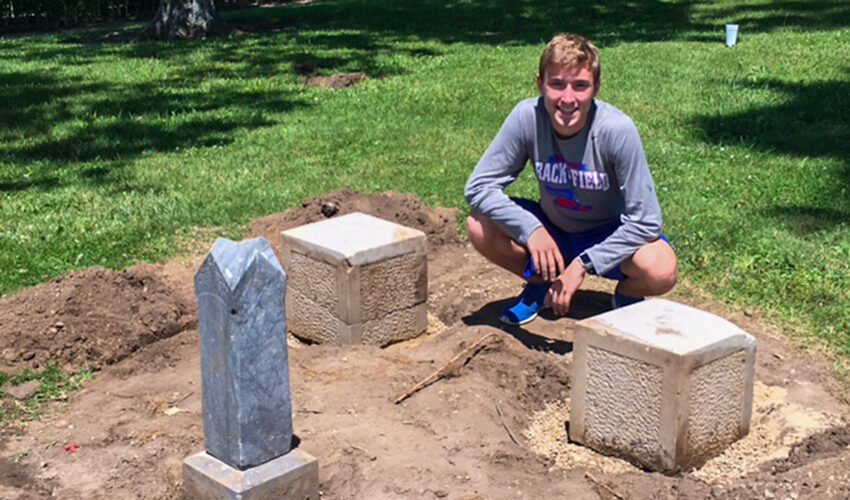 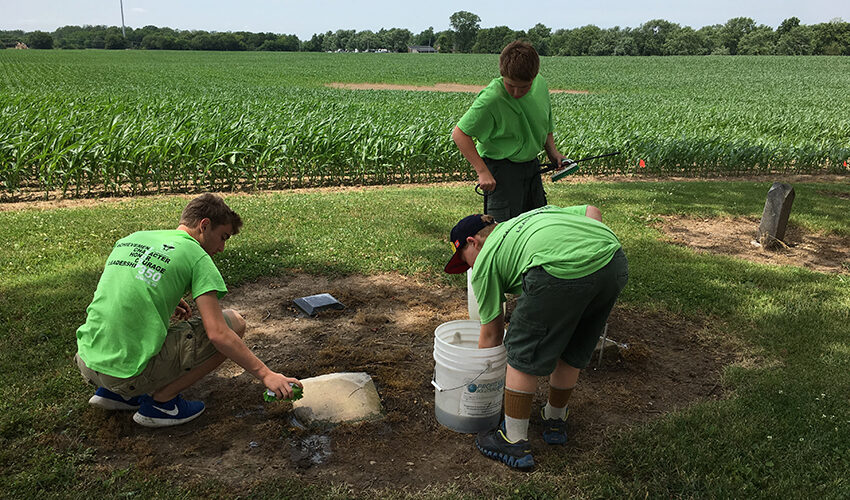 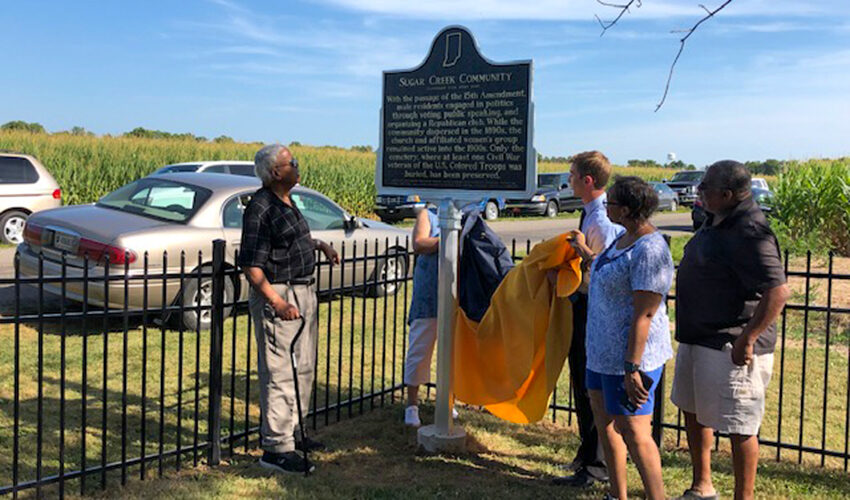 For the restored site’s dedication in August 2019, Reece Thompson located and invited descendants of those buried in the cemetery to attend as guests of honor. (Photo courtesy Thompson family)
Previous Next

Though only four headstones remained to mark gravesites, records suggested 27 people were buried on the cemetery grounds. Reece partnered with Ball State University on a ground-penetrating radar study to search for buried headstones and artifacts, revealing that as many as 48 gravesites existed.

Though he completed his Eagle Scout project by September 2017, Reece realized the cemetery merited larger attention and took extra steps to further its preservation. He helped secure a $16,000 Indiana Historical Society Heritage Support grant and led the group in surveying the cemetery’s boundaries, erecting a decorative fence, and securing the Indiana Historical Marker. For the site’s dedication in August 2019, Reece located and invited descendants of those buried in the cemetery to attend as guests of honor.

“He spent hours and hours and brought together a team of diverse individuals to bring attention to people whose history had been lost,” notes Shannon Hudson, author of Abolitionists on the Underground Railroad: Legends from Montgomery County, Indiana, who assisted with the project. “It was long overdue.” 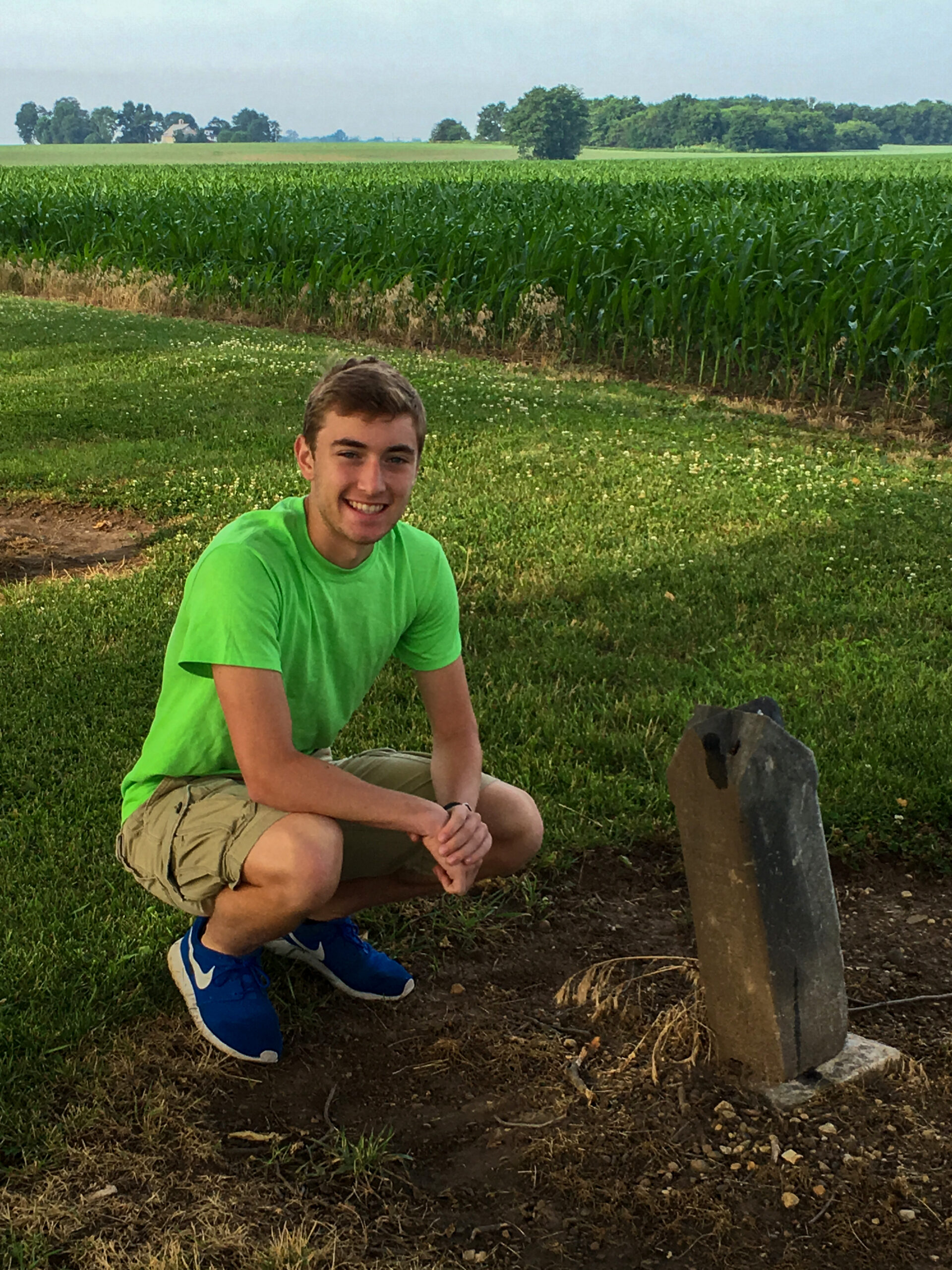 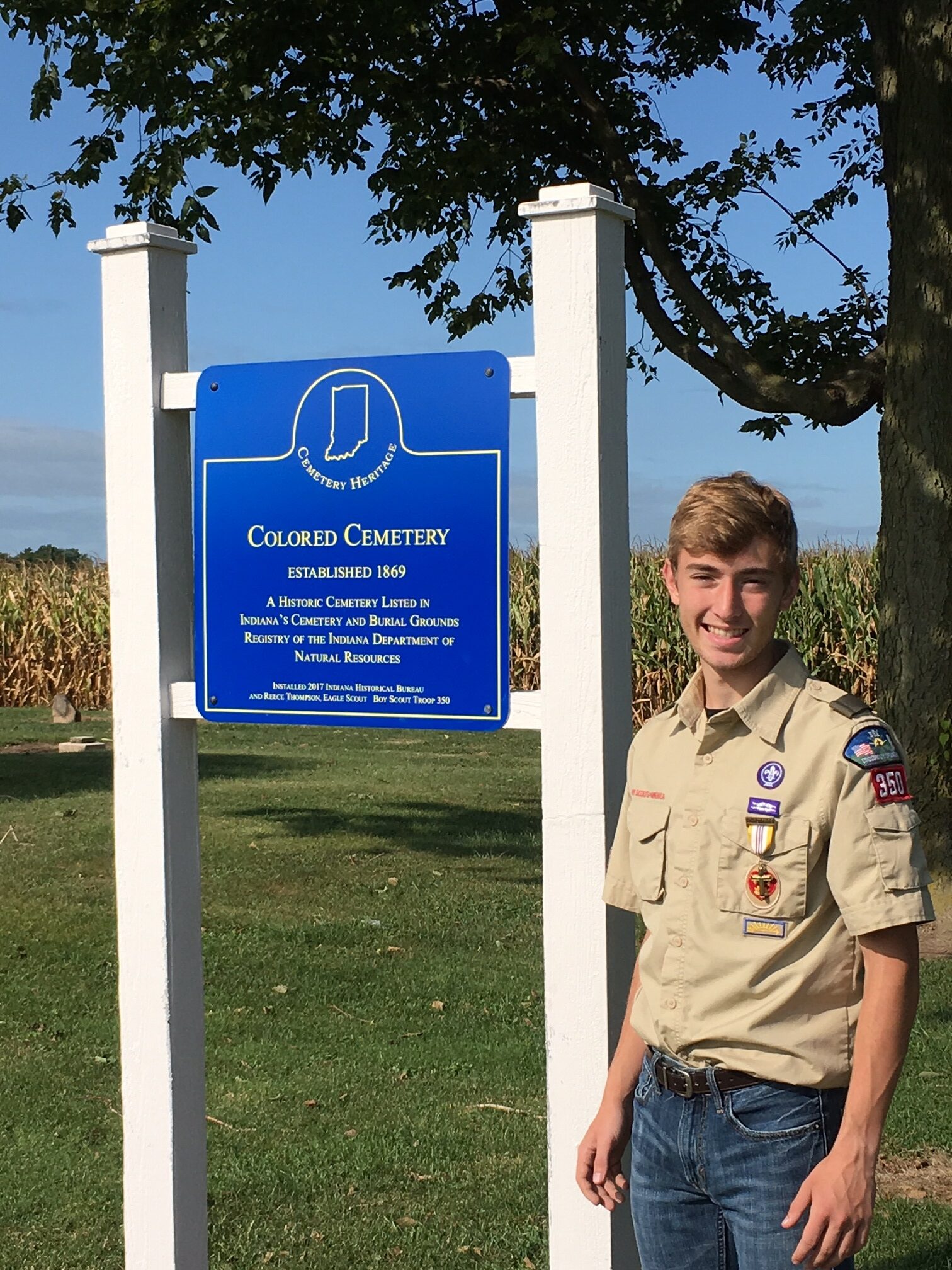 Inspiring the Next Generation

In Evansville, teacher Jon Carl inspires other young people to take a closer look at the landmarks around them, netting him our second 2020 Sandi Servaas Memorial Award.

An Evansville native, Jon recalls being devastated as a 13-year-old by the demolition of the city’s 1902 L&N Railroad Depot in 1985. As a field surveyor documenting the county’s historic structures in the ‘90s, he gained deeper appreciation of local landmarks and architecture, knowledge he shares today with students in his history classes at Reitz High School.

“I love it when kids recognize a building that they have lived with their whole life but have never taken the time to stop and really study,” says Jon. “Now they care about it and want to know its history and its future.”

In 2005, Terry Hughes, a friend and member of the Vanderburgh County Historical Society, encouraged Jon to take advantage of emerging technology to guide students in creating local history documentaries.

Fifteen years later, Jon’s “Feel the History” classes have engaged hundreds of students in researching and creating nearly 75 videos exploring the history, architecture, condition, and use of Evansville landmarks. The local PBS affiliate, WNIN, considered the video essays high-enough quality to air on its station, and community groups have used them in raising money for local landmarks including the Owen Block and Old Vanderburgh County Courthouse. The classes also created walking tours of local historic districts, including a guide to the Riverside Historic District with QR codes that take users to mini-video histories of buildings they see.

“Jon is instilling an awareness of Evansville’s history in students at a very impressionable phase of their lives,” notes Indiana Landmarks Board Member Jim Renne, who nominated Jon for the award. “The outstanding success of his work may not manifest itself for several decades, but he is inculcating fundamental appreciation for our built heritage from which all preservation efforts flow.” 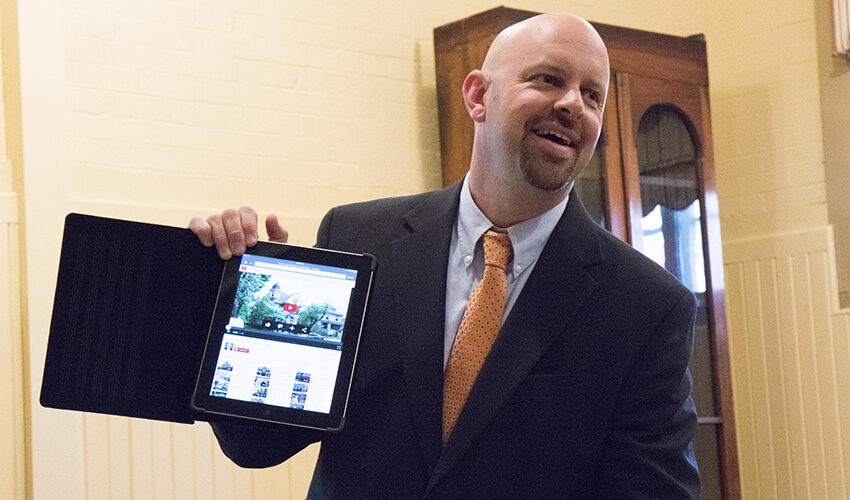 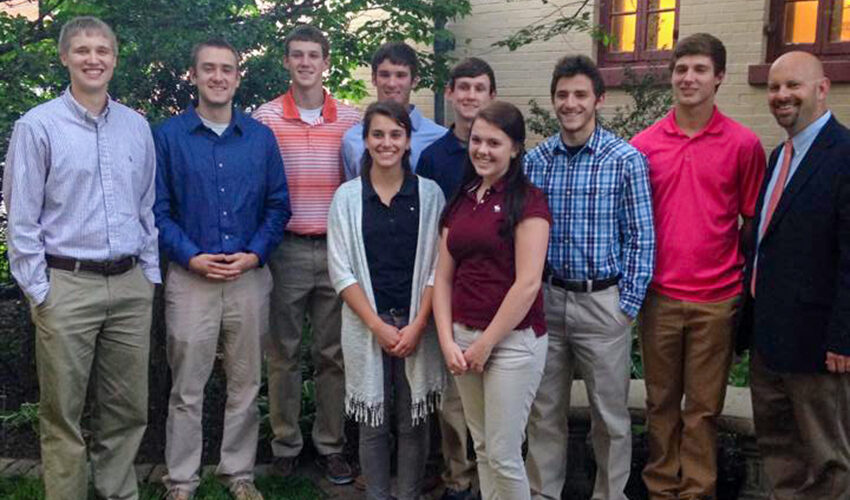 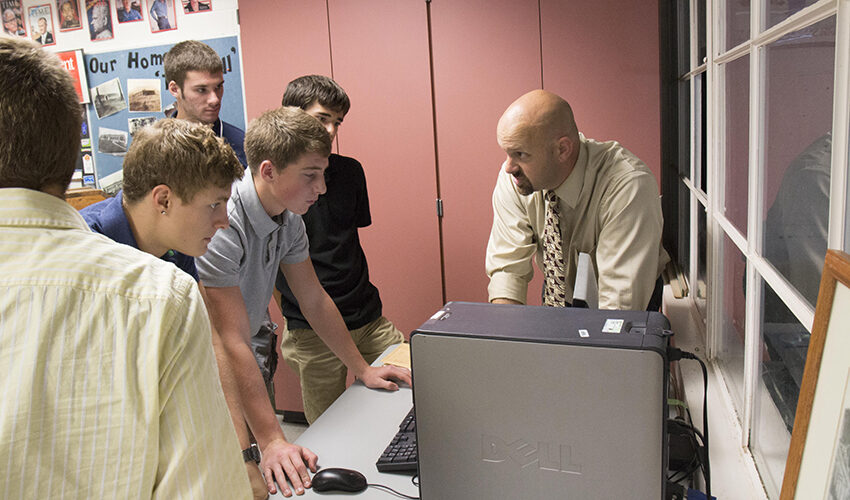 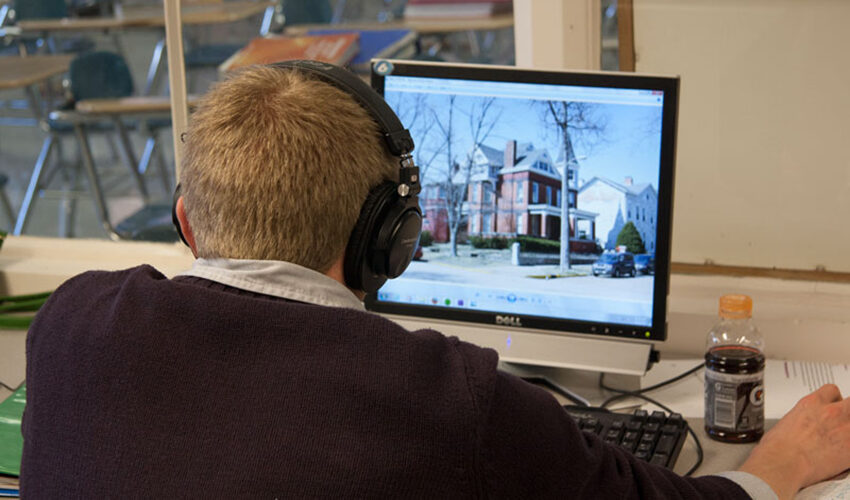 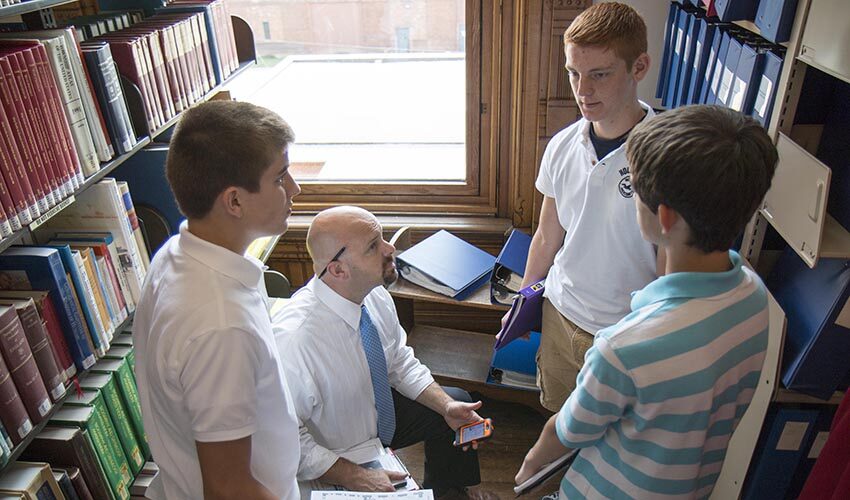 In his "Feel the History" classes, Jon Carl leads students in researching and creating videos exploring Evansville history and buildings. (Photo courtesy Jon Carl)
Previous Next
Sign up for our e-newsletter.