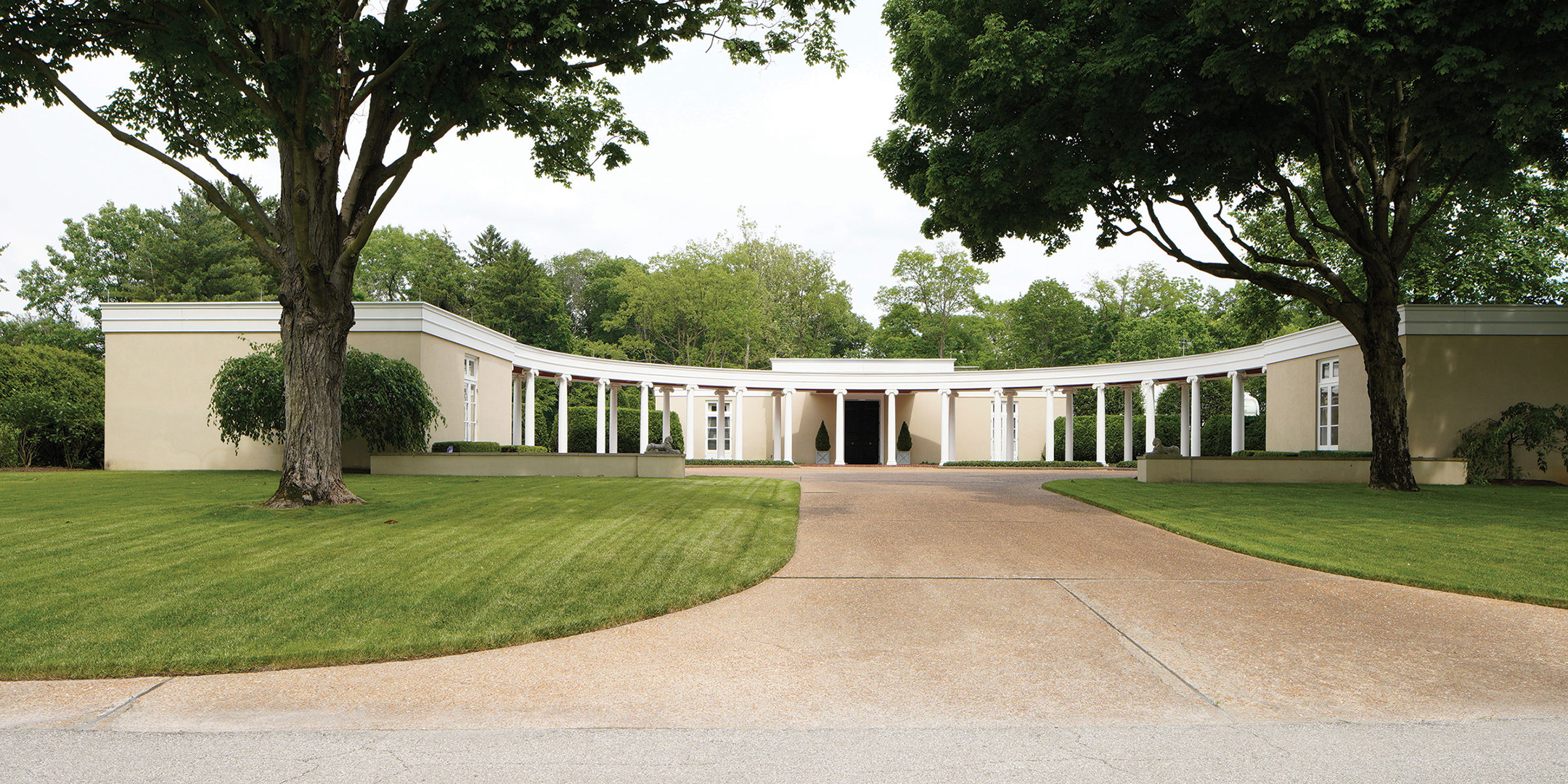 The landscape surrounding "Forebears," built in 1972 for Pete and Liz Fortune, will be featured during Indiana Landmarks' Back to the Future tour on June 4. (Photo by Tony Valainis, Indianapolis Monthly)
POSTED ON May 11, 2022 BY Indiana Landmarks | Events

Mid-Century Modern houses often incorporate walls of windows, skylights, and other features that maximize views of surrounding nature, blurring the boundaries between indoors and outdoors. On June 4, our Back to the Future: A Mid-Century Modern Landscapes Tour highlights the inspiration, showcasing outdoor living spaces and mid-century landscapes in Indianapolis.

“With the uncertainty of where things will stand with the COVID-19 pandemic at tour time, we had the idea of shifting the focus this year to gardens and designed landscapes at Mid-Century Modern properties,” says Mark Dollase, vice president of preservation services. “All proceeds from ticket sales will support the work of our affinity group Indiana Modern to preserve and promote the best of mid-twentieth century architecture, design, and landscapes across the state.”

Inspired by an eighteenth-century castle they saw in Kent, the Fortunes looked to incorporate the estate’s Palladian style into a modern home of their own and hired Indianapolis architect Courtenay Macomber, nationally known interior designer Otto Zenke, and Houston, Texas-based landscape architect Ralph Ellis Gunn to design the property the Fortunes named “Forebears,” built on a ridge above the White River.

Macomber incorporated Palladian concepts in his symmetrical, streamlined design for the one-story, stucco flat-roofed house, where a semi-circular colonnade distinguishes the front of the home, curving toward the street and ending in two outbuildings originally constructed as a guest house and garage. To accommodate Liz Fortune’s desire to host parties and fundraisers, Macomber, Zenke, and Gunn collaborated to create spaces suitable for entertaining inside and outside the house.

Gunn made a name for himself designing the landscape for Houston’s Shamrock Hotel in 1947, and the techniques he used in the ’50s to document and restore the 18-acre landscape of “Rosedown,” a Louisiana plantation, established national standards in restoring historic landscapes.

At “Forebears,” Gunn incorporated a mixture of cement and pea gravel shipped from Texas’s Trinity River to lend an aesthetically pleasing warm tone and assist with drainage in the front courtyard and walkways. Hedges of arborvitae, trimmed English ivy, and flower beds with seasonal plantings enhance Macomber’s symmetrical design. In back, Gunn used the same pea gravel and cement mixture to create a terrace that descends four steps to a pool. Low walls capped with limestone border the north and south ends of the pool, forming the edge of beds planted with hornbeam trees, boxwood hedges, and trimmed ivy. The 1983 publication Indianapolis Landscape Architecture showcased Gunn’s design at “Forebears.” 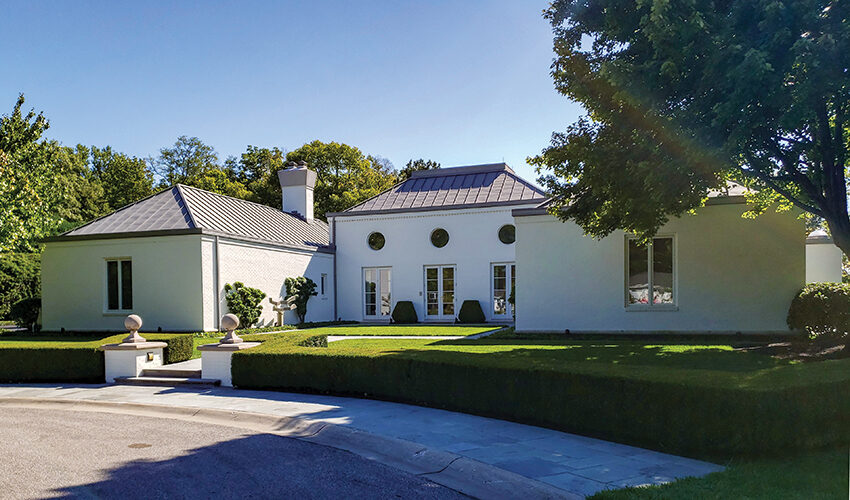 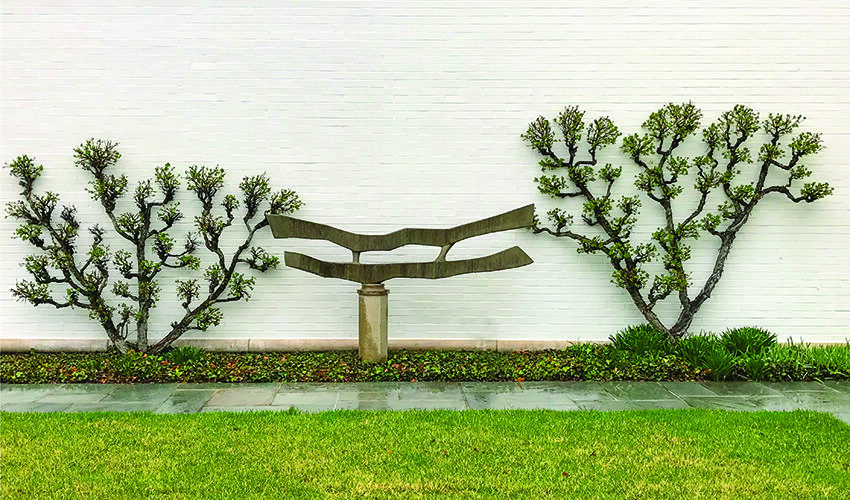 Upon returning from their honeymoon in 1962, Donald “Don” and Mary Mattison hired their friend and architect Evans Woollen to design a house above the White River where they could admire nature and showcase their love of art. Don Mattison, an internationally known painter who trained with muralist Eugene Savage, won the 1928 Prix de Rome competition and spent three years at the American Academy in Rome before returning to America to teach and work in New York City. In 1933, he came to Indiana to direct the Herron School of Art.

Incorporating a symmetrical design with wings surrounding the main entrance of the house to create a central courtyard, the Mattison House is considered an outstanding example of the New Palladianism style. The smooth red brick exterior was painted white to emulate houses the Mattisons admired on their honeymoon in the Greek Islands. Russell “Jock” Fortune III and the late Penny Fortune purchased the house in 1978 and hired Woollen in the early 1990s to design an addition, including extending the hillside and installing a pool.

See both landscapes, along with other mid-century gardens including the Four Seasons Garden at Newfields, during the tour on Saturday, June 4, from 11 a.m. to 4 p.m. Tickets are $20 for the general public, $15 for Indiana Landmarks members, and $10 for Indiana Modern members, available at midcenturytour22.eventbrite.com.