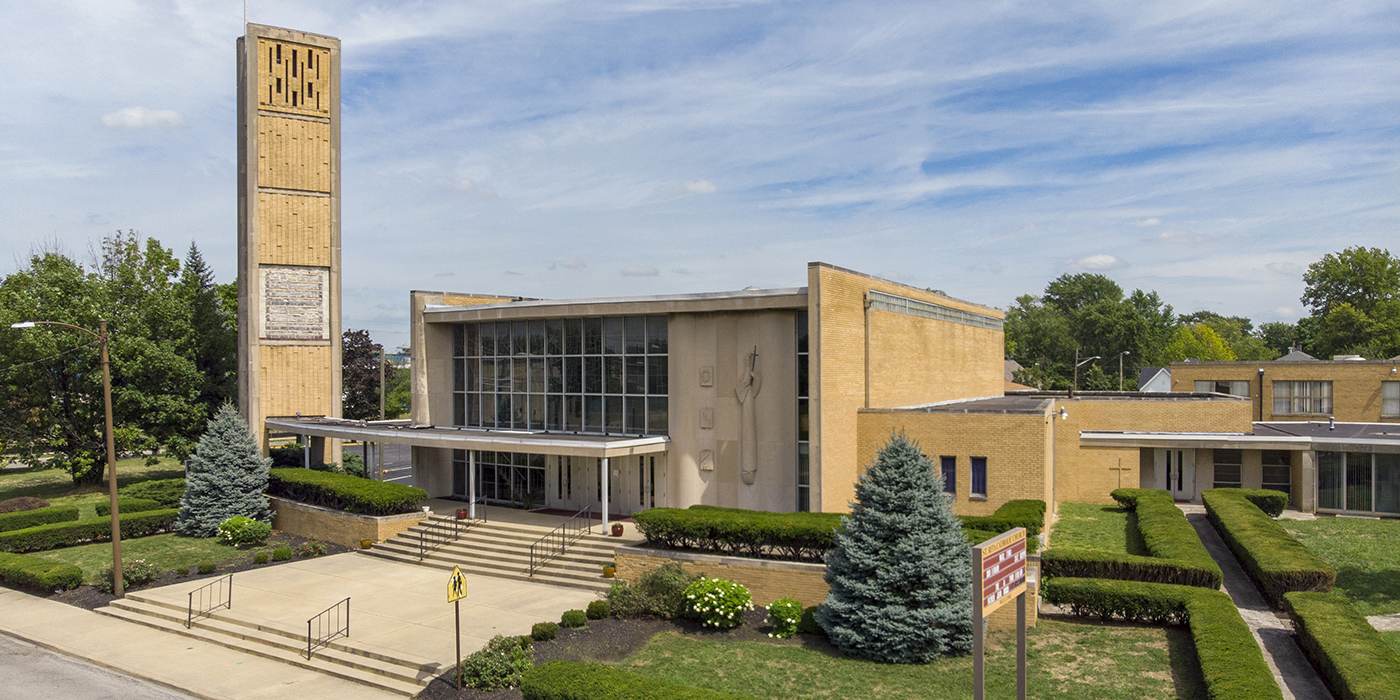 Parish members have launched a capital campaign to raise money for Saint Rita Catholic Church, a mid-century standout built in 1958 on Indianapolis’s near north side. Phase 1 will address urgent repairs to its signature bell tower, where water infiltration has caused brick to separate from limestone. (All photos by Evan Hale)
POSTED ON November 2, 2022 BY Indiana Landmarks | African American Landmarks, News, Sacred Places

Since it was established in 1919 as the first parish in Indianapolis to welcome Black Catholics, Saint Rita Catholic Church in the city’s Martindale area has maintained a forward-thinking reputation. Today, the congregation continues to emphasize community service, and at the same time its members are working to make sure the church’s Mid-Century Modern house of worship remains a vital gathering place.

St. Rita’s near northside campus got its start when church leaders moved a former Knights of Columbus chapel from Fort Benjamin Harrison to 19th Street and Arsenal Avenue and added on a small school building. When Father Bernard Strange came to work at the church in 1935, he established a robust program of youth activities aimed at serving African Americans across Indianapolis, including boxing tournaments, basketball games, and weekly dances that, at their most popular, drew crowds of 500 to 800. To accommodate the expanding programming and overflowing school, the congregation raised money for a new school and gymnasium dedicated in 1954. Father Strange insisted that the gym include a circular wooden floor around the perimeter, designed to accommodate the skating parties that many older members remember fondly.

In the 1950s, the parish reached 1,500 members. Having long outgrown the chapel, the congregation spent years raising money for a new church, eventually hiring Indianapolis architect Charles M. Brown and engineering firm Wilhelm and Associates to build a new Post-Modern house of worship. Finished in 1958, the brick and limestone bow-shaped structure features a bell tower with gold embossed cross. Inside, the church is a visual feast of mosaics, stained glass, and bronze works designed by artist Peter Recker, whose work on a church in Milwaukee caught the attention of Father Strange. Behind the main altar, Recker’s “Coming of Elijah” mosaic stretches floor-to-ceiling, illustrating Elijah being swept up to heaven. “If you look at the tiny little pieces of stone, you’ll see bands swinging low and going up that symbolize the Negro spiritual ‘Swing Low, Sweet Chariot,’” says parishioner and church historian Caleb Legg. “It’s a nod to the faith, but also a nod to the African American who is marginalized through so much of the past century.” 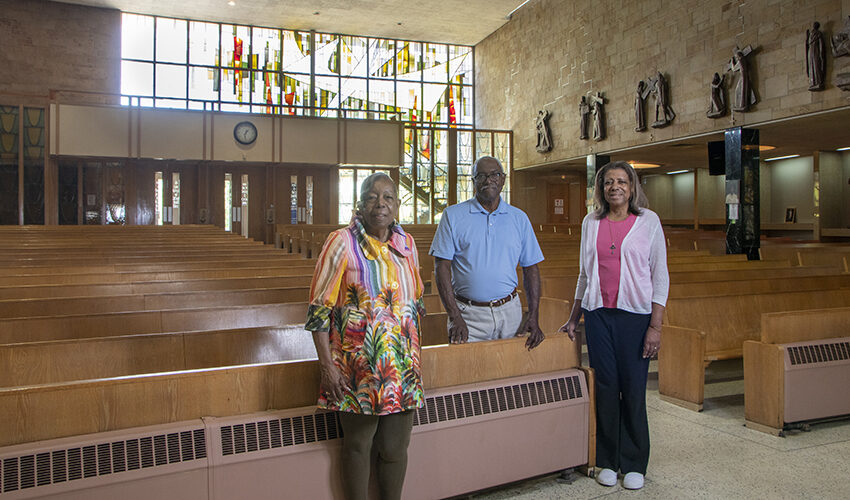 Dr. Linda Johnson, Caleb Legg, and Gail Trippett (above, left to right) are part of the leadership team planning for the future of Saint Rita’s and its collection of buildings dating from 1919 to 1972. 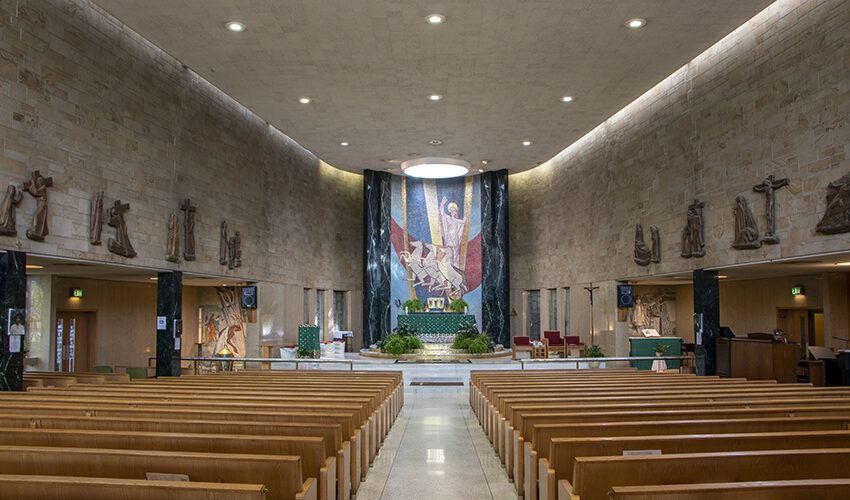 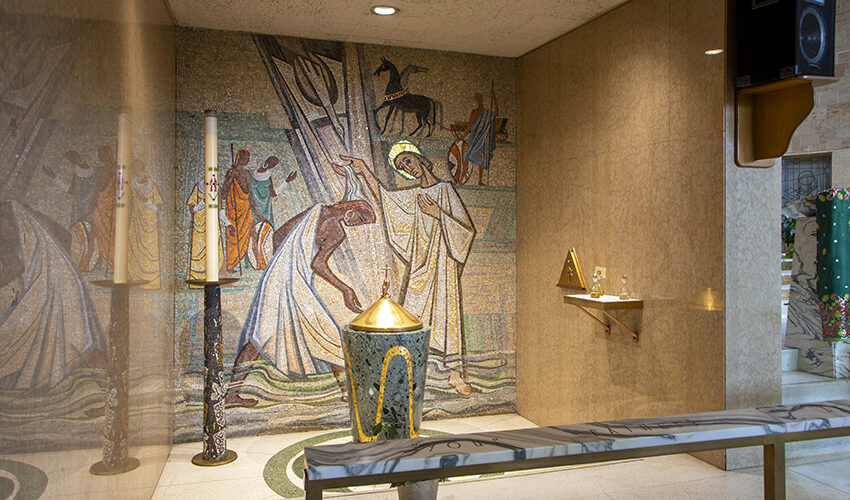 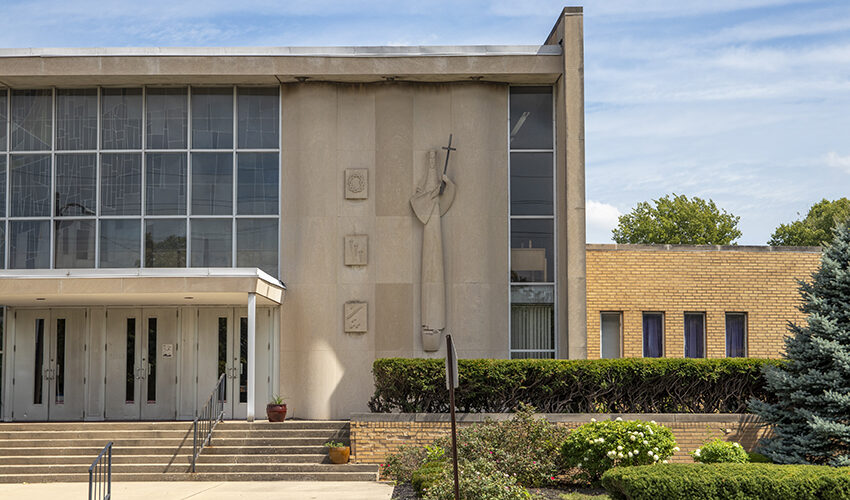 Following years of fundraising, the congregation hired Indianapolis architect Charles M. Brown and engineering firm Wilhelm and Associates to build a new Post-Modern house of worship finished in 1958.
Previous Next

Along with serving the city’s youth, St. Rita’s congregation aided neighborhood beautification efforts, established a kindergarten and nursery dating to the 1960s, and offered a variety of programs to combat poverty, hunger, homelessness, health problems, and crime. To make sure the church can carry on its work well into the future and maintain its collection of buildings dating from 1919 through 1972, church leaders participated in Indiana Landmarks’ Sacred Places Indiana program, gaining insights on stewardship and fundraising.

“While the church was set aside for African Americans, it was always very civic minded in making sure the mission of the church was carried out throughout the community and not just for Catholics,” says Sister Gail Trippett, institutional advisor and past parish life coordinator. “We know we have a rich history and participating in Sacred Places Indiana has helped us look at our facility and all our buildings and ask how we can repurpose them for what’s needed for the community now.”

A $1.15 million capital campaign is underway to raise money for the mid-century church and grounds. Phase 1 includes urgent repairs estimated at $500,000 for the church’s signature bell tower, where water infiltration has caused brick to separate from the limestone and forced closure of the porte cochere below. The tower serves as a cantilever for the church’s front façade, making its repair necessary to protect the face of the building. The church recently received a fundraising boost via a $150,000 matching grant from the National Fund for Sacred Places.

“Saint Rita is the saint of the impossible,” says Legg. “Lots of folks thought it would be impossible to put all this together with the poor congregation we had in the early twentieth century. Out of a neighborhood of factory buildings and tiny shotgun homes, we’ve been able to build this whole campus that’s now being nominated to the National Register of Historic Places.”

On November 29, Legg will give a talk at Indiana Landmarks Center highlighting the church’s history and architecture, and on December 3, the church will be one of five historic Indianapolis churches featured on a holiday church tour presented by Indiana Landmarks.