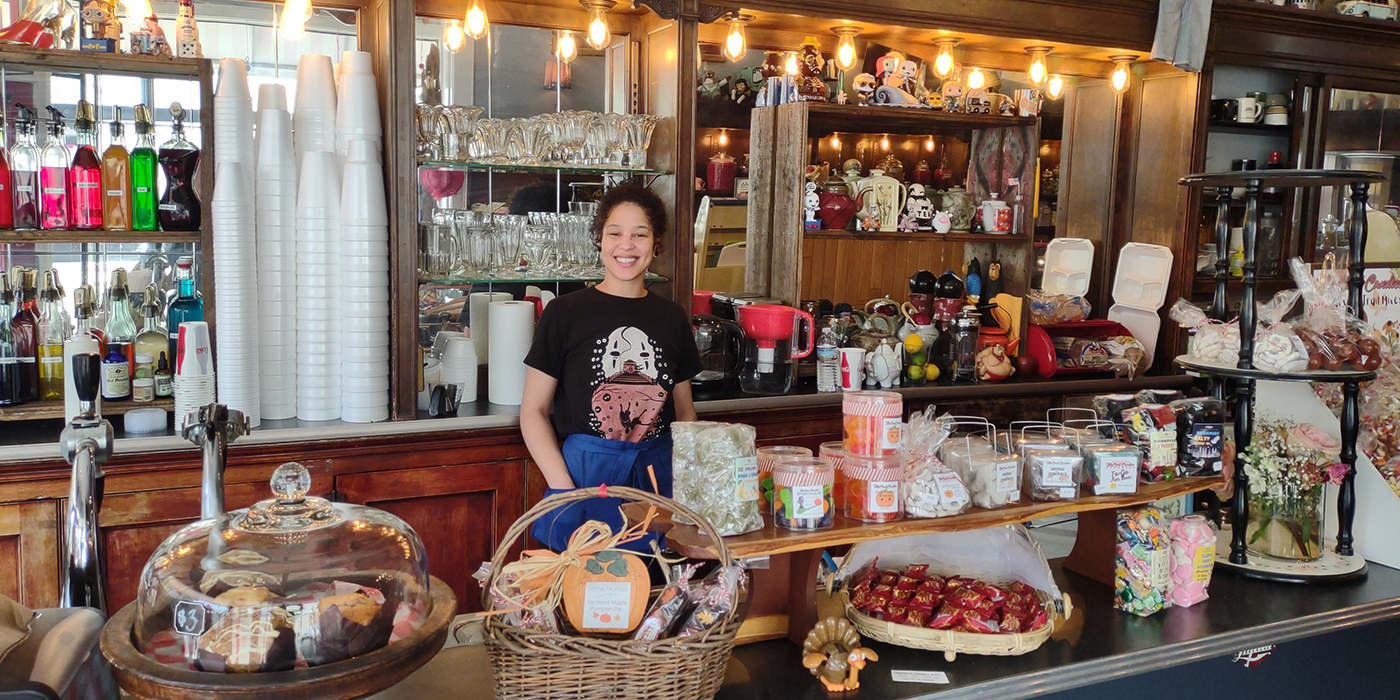 In Lafayette, McCord Candies doubles as both candy shop and lunch spot in a Second Empire-style building at the corner of Sixth and Main streets. (Photo by Marsh Davis)
POSTED ON November 2, 2022 BY Indiana Landmarks | News

In 1891, Jeffersonville resident Charles Schimpff wrote to his brother Gustav “Gus” Schimpff Sr., that the city needed a confectionery to replace the one he’d recently closed, inviting Gus to move up from Louisville to open a shop of his own. It worked. Gus opened Schimpff’s Confectionery on Spring Street that year, and it’s been a downtown mainstay ever since.

In 1989, on the eve of its centennial, Schimpff’s future appeared in jeopardy when owner Catherine Schimpff died, and the business briefly closed. To save it, her nephew Warren Schimpff and his wife, Jill, purchased the business in 1990 and relocated from California to run it. They restored the shop to its 1891 appearance, rehabbing the pressed tin ceiling, refurbishing the vintage soda fountain, and adding period-appropriate lighting. A decade later, they purchased and rehabbed the adjacent building to the north for use as a demonstration area and candy museum, with thousands of pieces of memorabilia on display.

In 2015, the couple seized an opportunity to expand the business again, this time buying and rehabbing the neighboring commercial building to the south as space for additional retail, seating, manufacturing, and storage. The Schimpffs took pains to bring back the building’s original character, restoring its terrazzo floor and returning the front façade to its historic appearance. Historic photos revealed the space once had a tin ceiling, so they recreated it using a period pattern manufactured by W.F. Norman Company of Missouri. 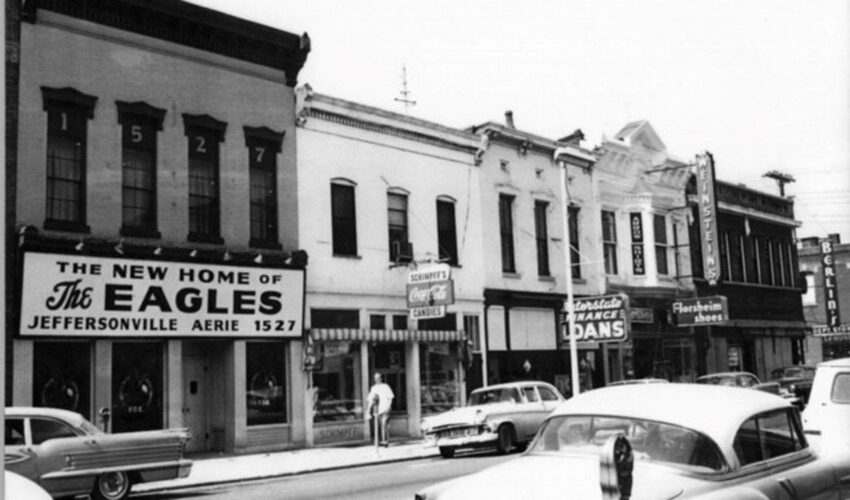 One of the oldest family-owned candy businesses in the U.S., Schimpff’s has operated in its original location on Jeffersonville's Spring Street since 1891. (Photo courtesy Schimpff family) 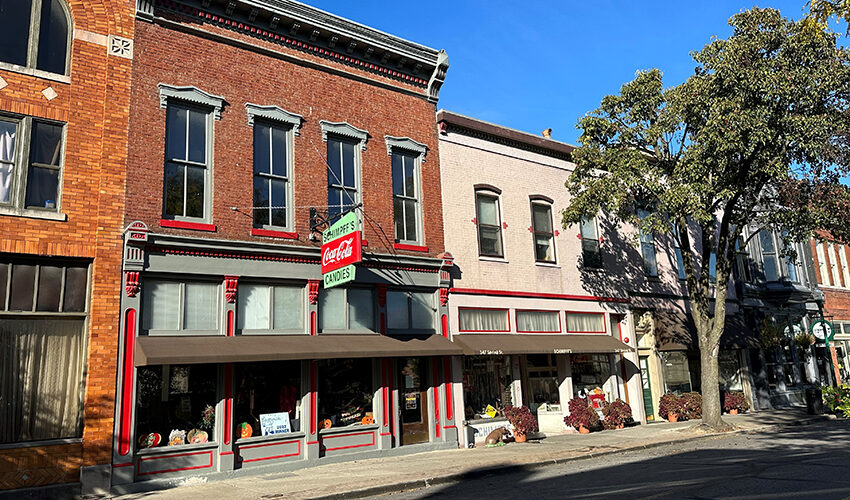 One of the oldest family-owned candy businesses in the U.S., Schimpff’s has operated in its original location on Jeffersonville's Spring Street since 1891. (Photo by Laura Renwick) 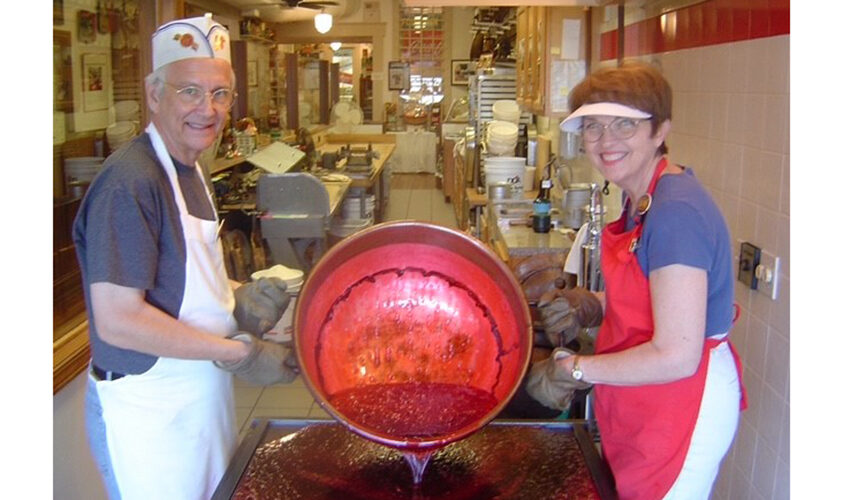 To save the business and keep it in the family, Warren Schimpff and his wife, Jill, purchased Schimpff's Confectionery in 1990 and relocated from California to run it. (Photo courtesy Schimpff family) 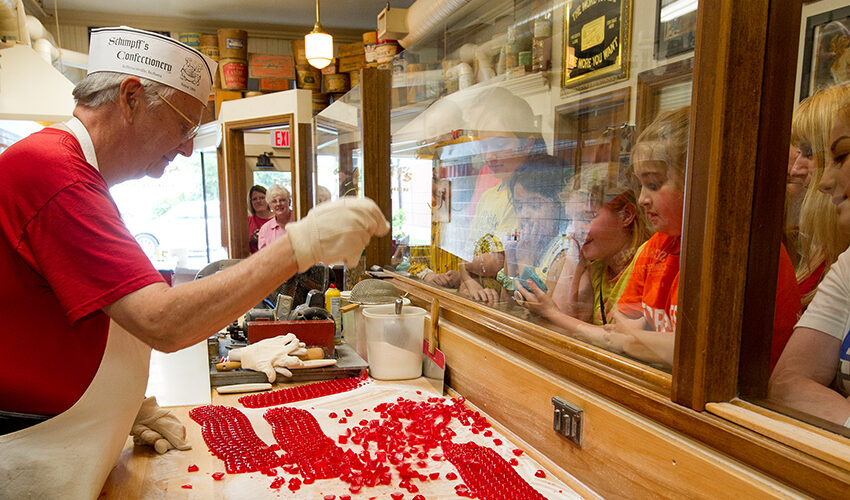 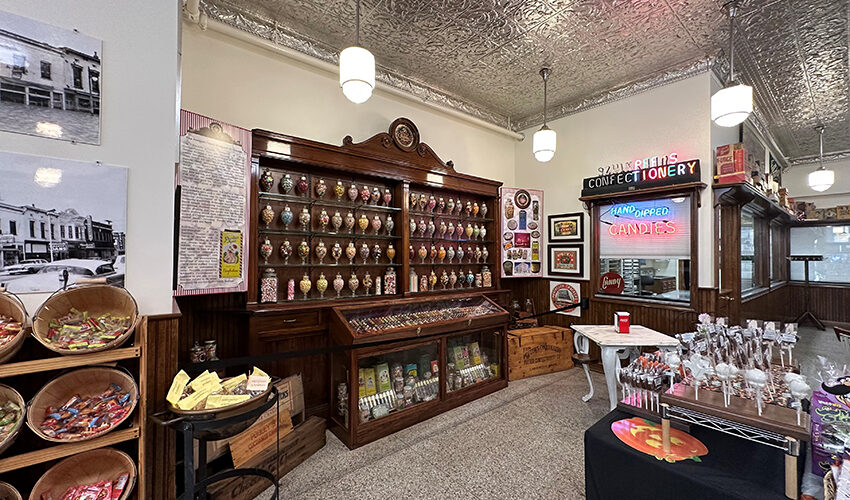 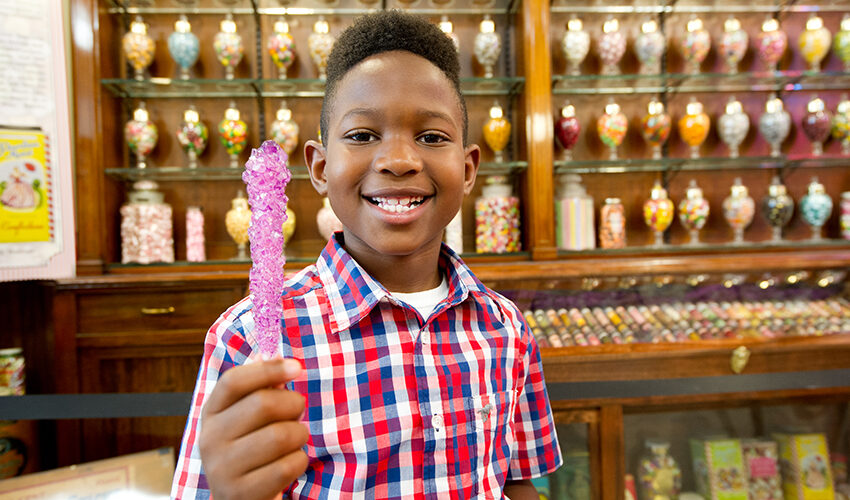 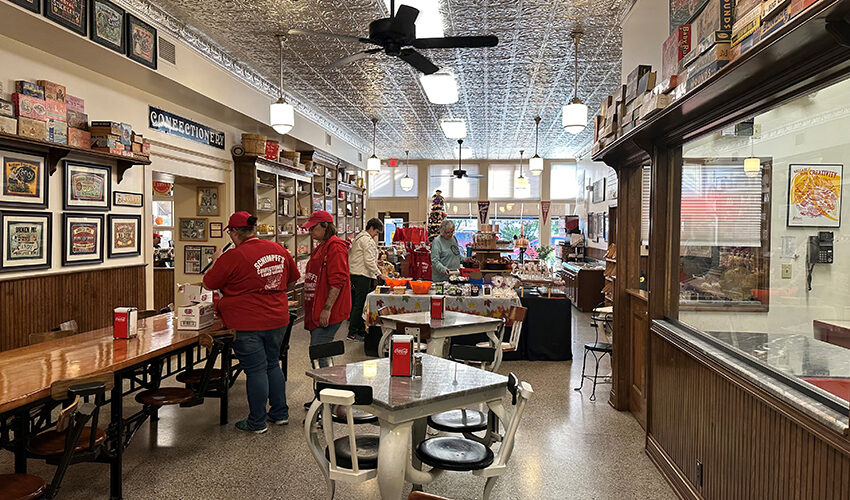 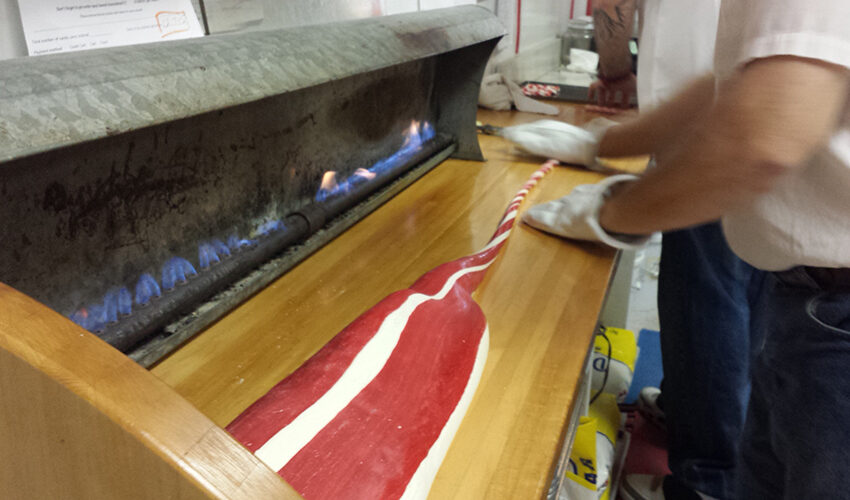 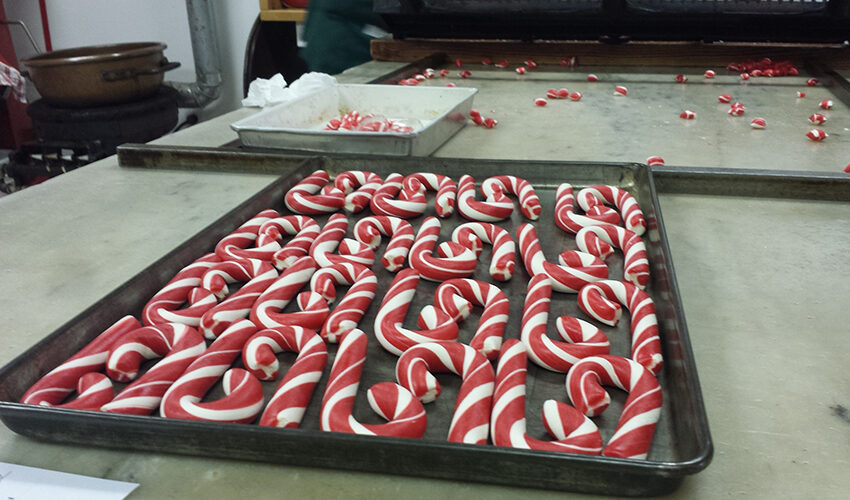 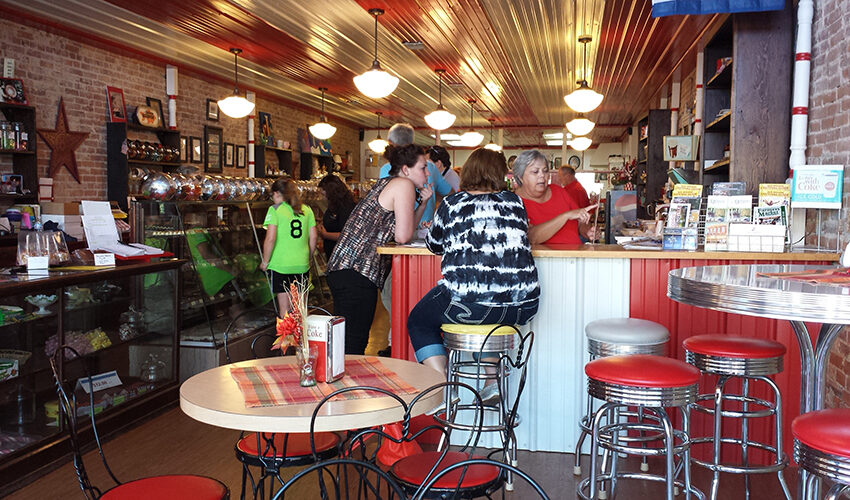 Schimpff’s remains a popular destination, whether customers come in for a meal at the 1920s-era lunch counter or drop by to watch confectioners make Schimpff’s signature candies: cinnamon red hots, hard fish candies (an Ohio River region tradition), and Modjeskas—caramel-dipped marshmallows named for a nineteenth-century Polish stage actress who performed in Louisville. “It’s been such an integral part of downtown Jeffersonville. People have been coming here all their lives,” says Warren Schimpff. “We wanted to keep that family history and community history alive.”

A similar desire to keep a Main Street anchor in operation led John and Pam Badger to purchase the Martinsville Candy Kitchen in 2004. Established by Greek immigrant Jimmy Zapapas in 1919, the confectionery is known for its candy canes, still made from Zapapas’s recipes and hand-crafted using his original wall hook, copper kettle, marble table, wood paddles, and Vulcan gas stove. The candy canes come in a variety of flavors, including fruity, clove, cappuccino, and butterscotch, with peppermint and cinnamon dominating during November and December. Lucky customers who visit the business at the right time may get to see candy canes being poured and shaped. The shop also serves up other toothsome treats such as buckeyes and tiger butter, along with pie by the slice. Indiana Landmarks recognized the Badgers’ work to improve the nineteenth-century building that houses their business with a restoration award in 2016. 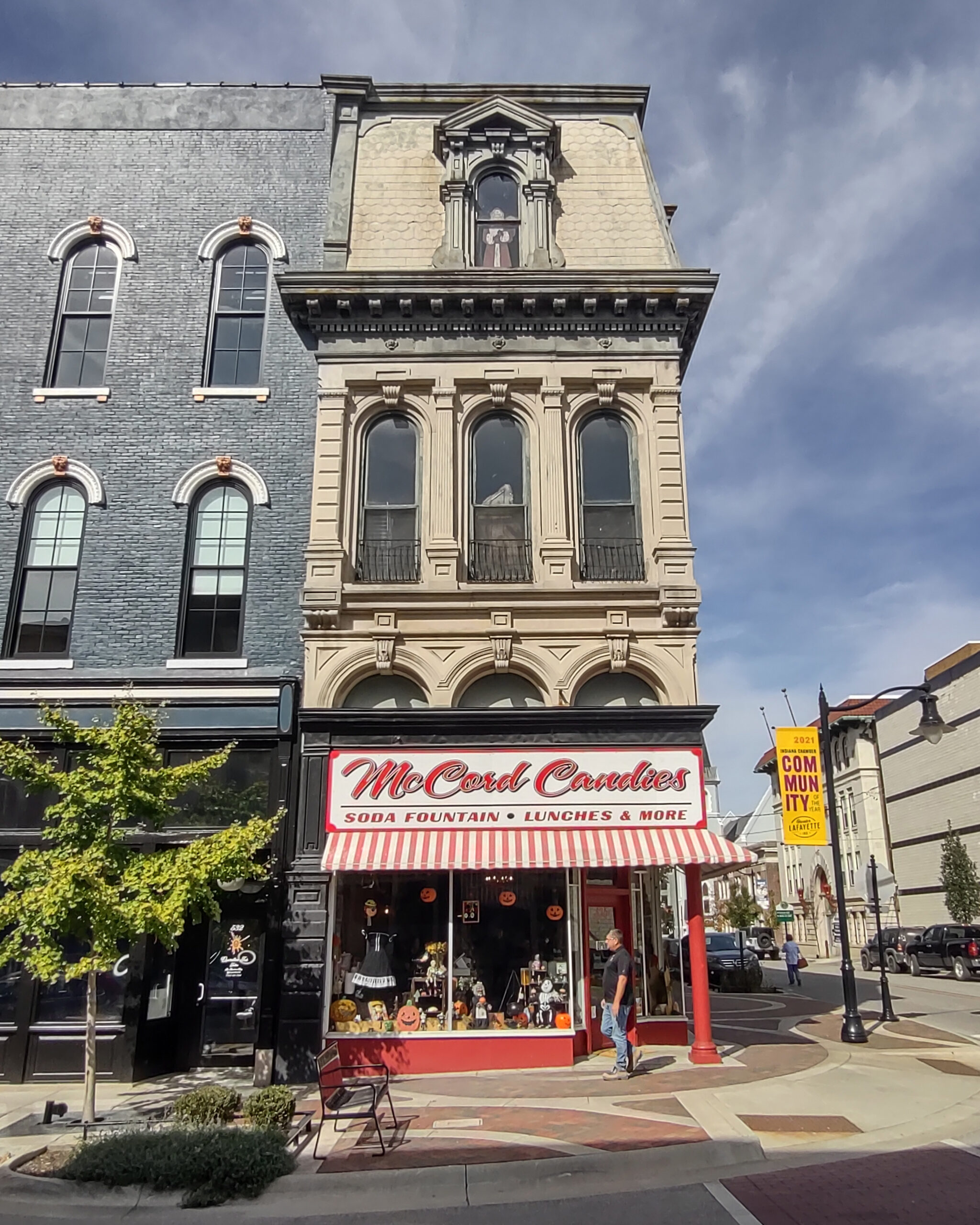 In Lafayette, McCord Candies doubles as both candy shop and lunch spot in a Second Empire-style building at the corner of Sixth and Main streets. (Photos by Marsh Davis) 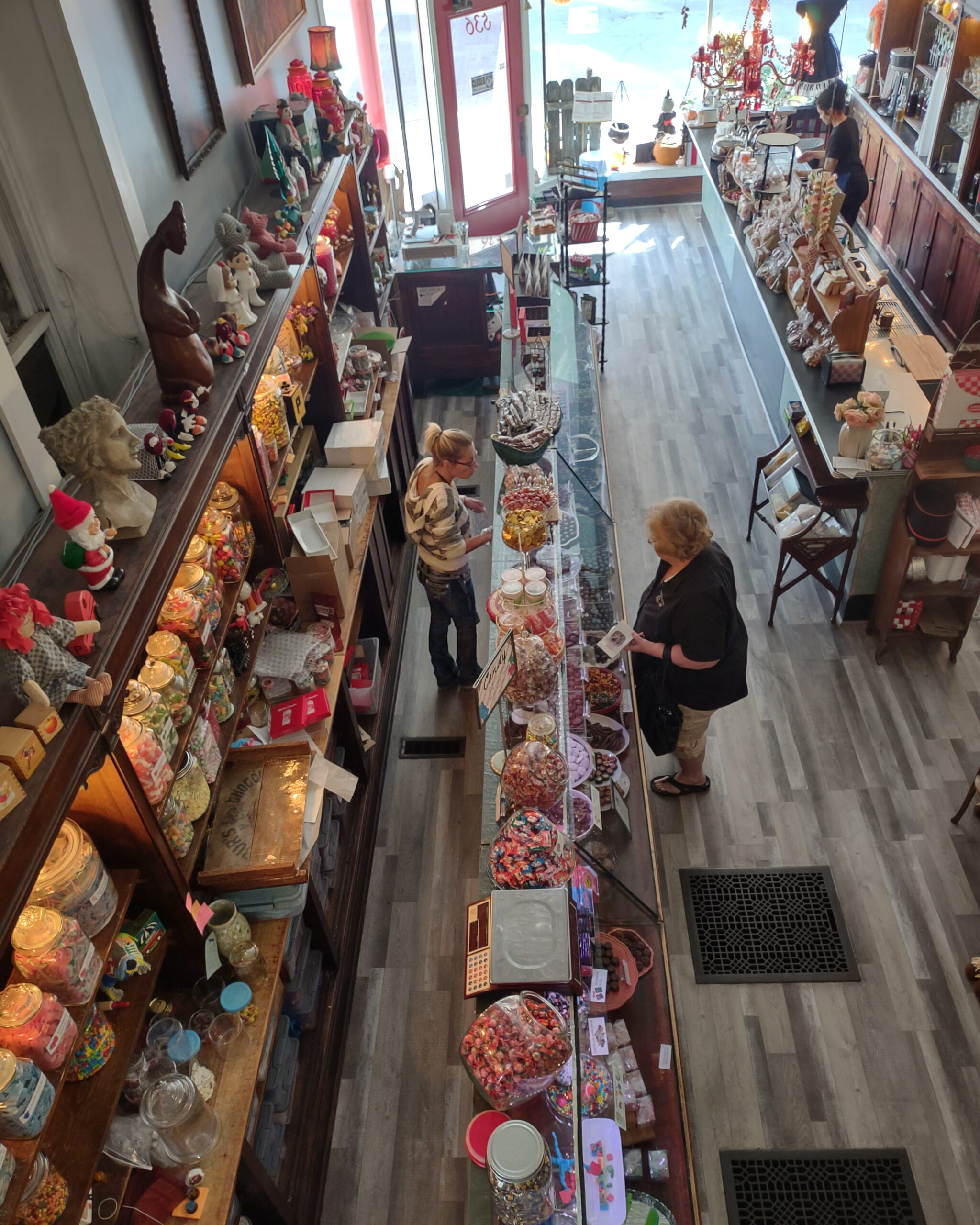 In Lafayette, McCord Candies calls itself “the sweetest corner in town,” an apt description for a place that’s been selling confections at the intersection of Sixth and Main streets since 1912. The Second Empire-style building originally housed Glatz Candies, until Ivey McCord, an employee of the Glatzes, purchased the building in 1947, prompting the store’s first and only name change. Taking advantage of downtown foot traffic, in the 1950s the McCords added the soda fountain and lunch counter still in operation today.

While McCord Candies has changed hands multiple times over the years—Billie and Angie Pattengale became the current proprietors this summer—little else has. A trip to the shop—still furnished with vintage cupboards, display cases, and tin ceiling—is like stepping back in time. Beginning November 12 and running through December 23rd, the shop offers candy cane tours, sharing McCord’s history and letting participants test their skills in shaping the confection. You can make a reservation on their website.