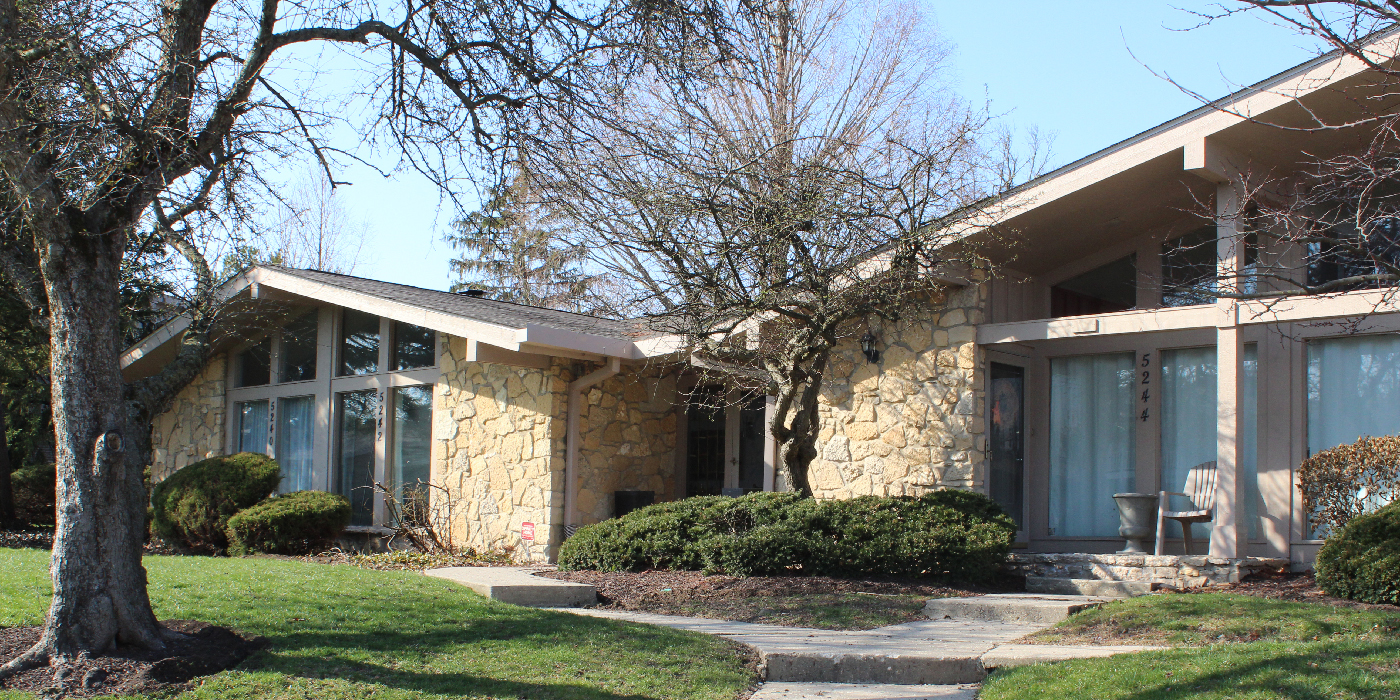 Our Back to the Future tour on June 2 includes an unusual attached home designed by Avriel Shull in Indianapolis's Ladywood subdivision.
POSTED ON May 2, 2018 BY Indiana Landmarks | Events, Modern Landmarks, News

Scott Tod and his children moved to their 1957 home at 6115 Green Leaves Circle in Indianapolis in 2014. The late Evans Woollen III (1927-2016), one of Indiana’s most revered modernist architects, designed the sleek house. While Woollen is most widely known for designing Clowes Memorial Hall, the Minton-Capehart Federal Building, and the expansion of the Indianapolis Central Library, his body of work includes a number of residential projects. You can see the house on Green Leaves Circle and four other standout homes on Indianapolis’s north side on the eleventh annual Back to the Future: A Mid-Century Modern Home Tour, Saturday, June 2. 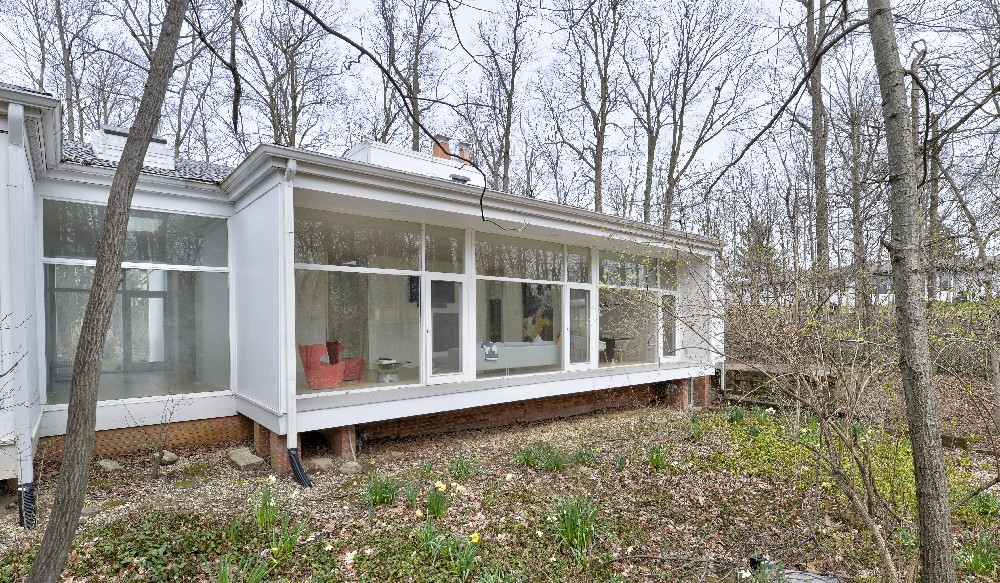 The Back to the Future tour also features a home by Avriel Shull (1931-1976), a pioneering mid-century designer from Indianapolis whose creations appear throughout the nation thanks to widely published plan books. Although Shull focused primarily on single-family residences, the home at 5242 Nob Lane is an attached unit in Ladywood, a subdivision with winding streets lined with double houses and larger multi-unit structures, all designed by Shull. 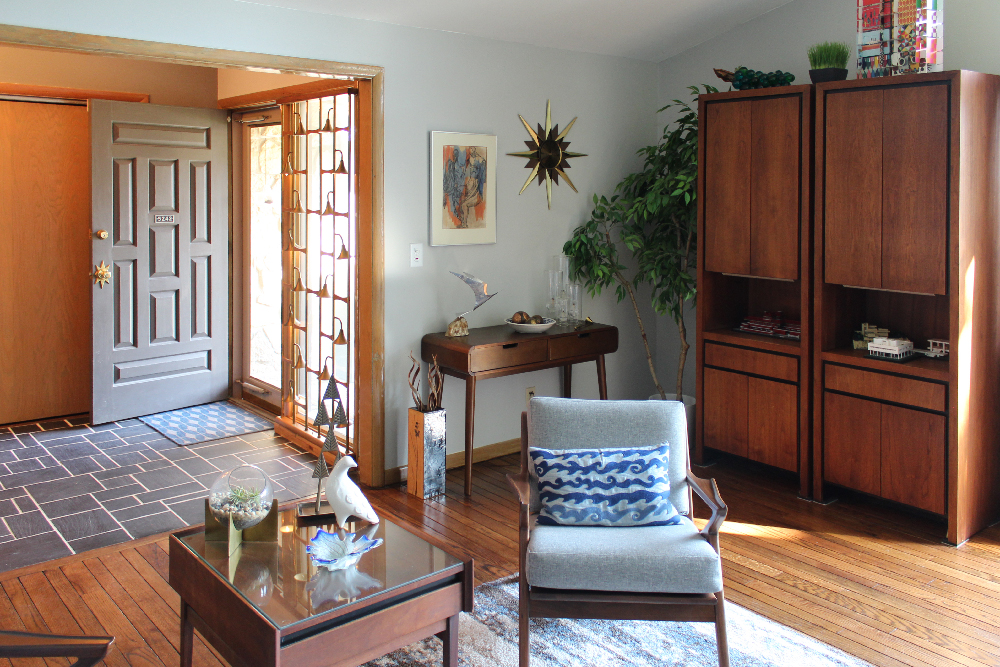 The 1967 split-level townhouse owned by Fred Mills and Matthew McElfresh bears many of the designer’s trademarks, including a vaulted living room ceiling with a wall of windows following the pitch of the roof, a massive stone fireplace, custom light fixtures, original bath fixtures and a finished walkout lower-level. Fred and Matthew’s impressive collection of Mid-Century Modern furniture includes an Adrian Pearsall-designed sofa and table, pieces by Herman Miller, and original artwork from the period.

The house at 6478 North Olney Street returns to the limelight for the first time in 57 years after its debut as the 1961 Indianapolis Home Show House at the Indiana State Fairgrounds. Designed by Hoosier architect Harry Cooler (1925-2016), the one-story home was reconstructed at its current site later in 1961 as the family residence of the Indianapolis Home Show president himself. 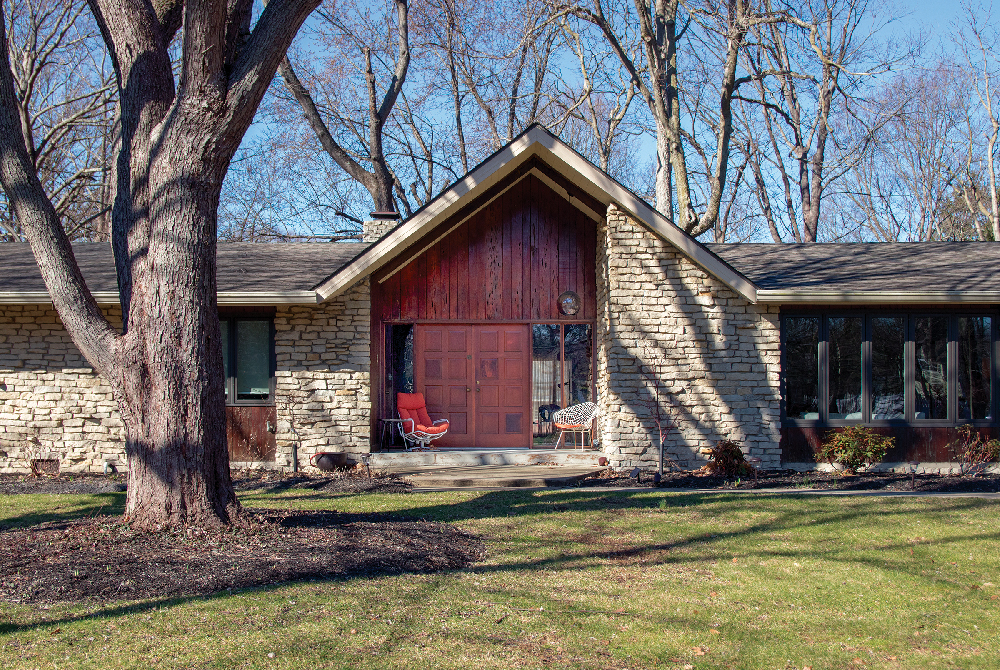 Nearby, the home of Jonathan and Stephanie Eriksen at 7750 Camelback Drive gives off a “Brady Bunch” vibe. The 1968 Split-Level house in the Ivy Hills subdivision sits below street-level on a hillside lot, enclosing 3,600 square feet behind a deceptively modest façade. Unique features include a spiral staircase supported by metal rods suspended from the family room ceiling, an indoor Tiki bar covered by a shake-shingle canopy, and a floor-to-ceiling stone fountain in the foyer. The architecture of the house serves as a perfect backdrop for the couple’s extensive collection of modern art and furniture. 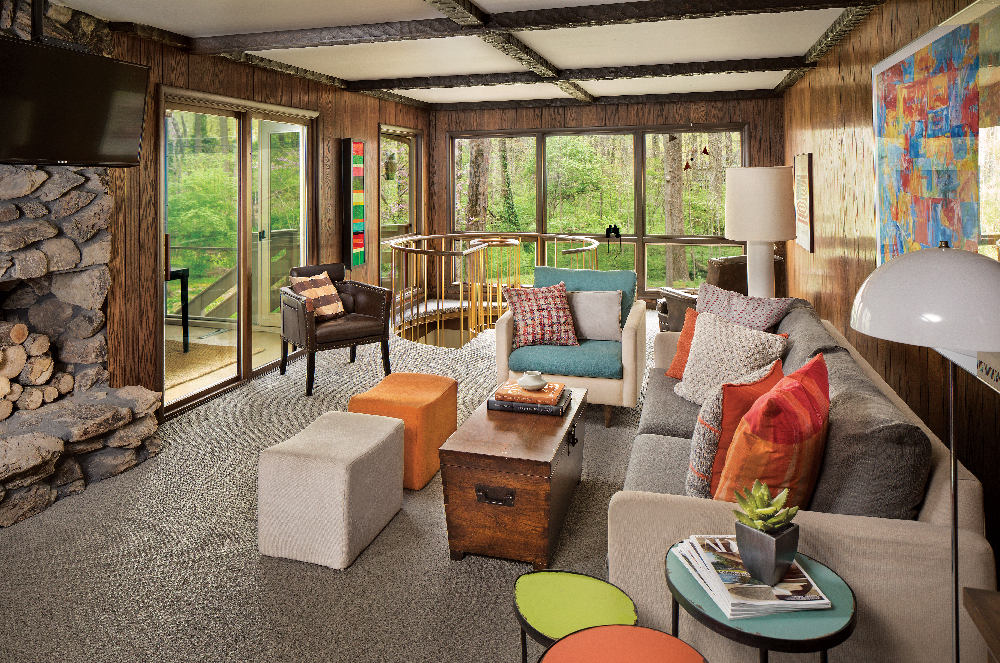 With its gable end turned to the street and its long side overlooking a fenced courtyard, the home of Cory Robinson and Laura Walters at 4148 Vera Drive is an exemplar of efficient spatial planning. The 1956 ranch built by Lafayette-based National Homes Corporation – a manufacturer of prefabricated houses – for its “Ranger” series was designed by Charles Goodman (1906-1992), architect for the original National Airport outside Washington, D.C. and the well-known Hollin Hills neighborhood in Alexandria, Virginia.

Natural light floods the home’s open-concept living area from original ribbon windows on three sides.  Walters, a stylist and owner of Style Riot, and Robinson, a furniture designer and professor at Herron School of Art & Design, chose and artful mix of vintage furnishings and modern art. “We love the layout and flow of the house, and the courtyard becomes an added room in warmer months,” says Walters.

The tour on Saturday, June 2, from 1 to 6 p.m. costs $20 in advance for non-members, $15 for Indiana Landmarks members and $10 for members of our Indiana Modern affinity group. You can buy tickets online or in person at Indiana Landmarks Center, Form + Function in Nora, and Silver in the City stores in Indianapolis and Carmel. Day-of-tour tickets are $25, available at the tour headquarters, First Friends Meetinghouse at 3030 Kessler Boulevard East Drive.

Because this year’s event covers a larger geographic area than usual, tourgoers will drive from house to house rather than riding shuttles between locations. Although street parking is available at each location, we encourage carpooling.