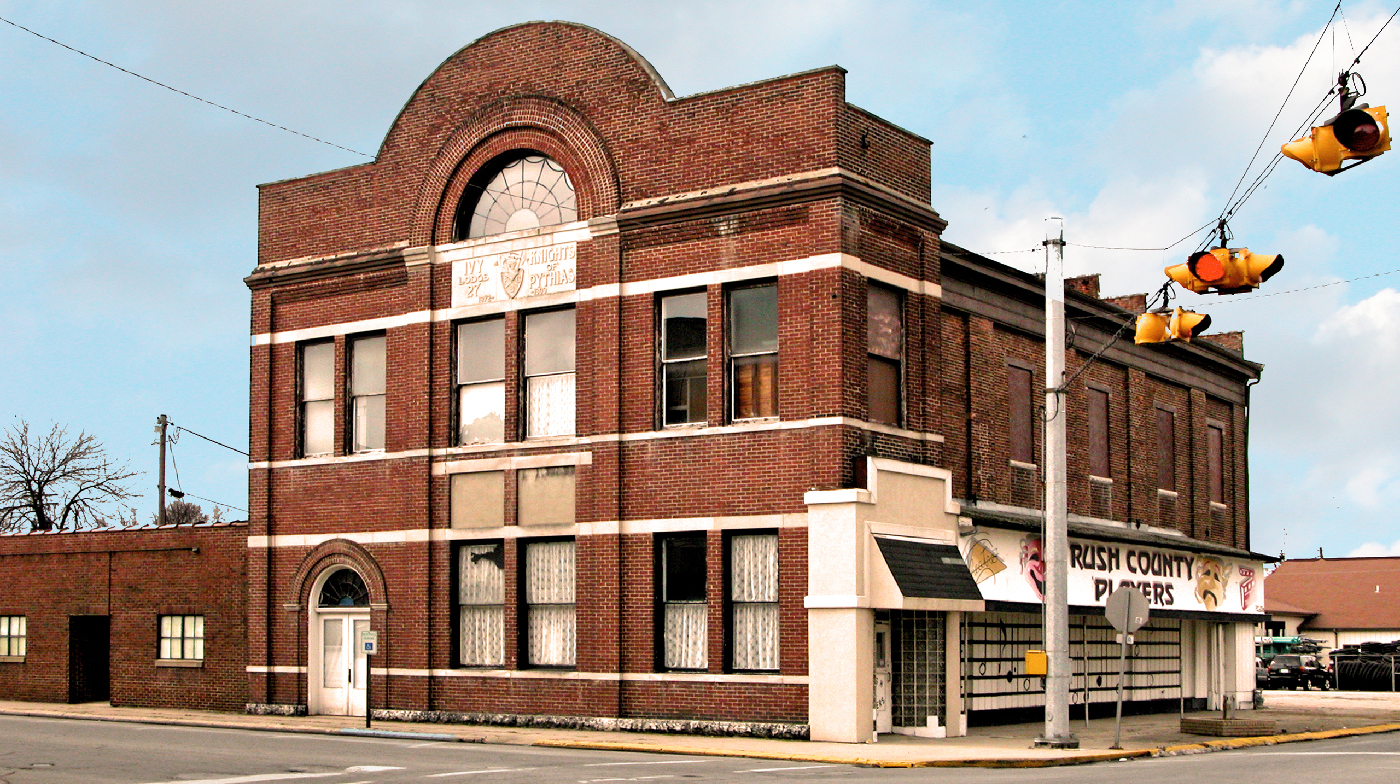 Rushville's Knights of Pythias building will be restored and adapted as apartments. (Photo: Lee Lewellen)
POSTED ON May 24, 2018 BY Indiana Landmarks | News

Investment in the Future

These days, the City of Rushville in east central Indiana is seeing more redevelopment than many larger cities, thanks to its designation in 2016 as a Stellar Community. Grants and tax credits made available by the designation have spurred dozens of projects, including restoration of the old Princess Theater to house City Hall, a satellite location of Ivy Tech, and a fully functional first-run move theater.

Work to convert the Old Durbin Hotel into modern senior apartments began last year, and workers recently discovered a previously hidden historic façade on a building slated for use as a technical training facility. Improved trails and green spaces planned throughout downtown will encourage residents and visitors to explore the expanding list of shops and restaurants.

The momentum includes restoration of the vacant Knights of Pythias building, built in 1850 in the Greek Revival style to house a church. The sanctuary occupied the second floor, with a library and reading room on the first floor. The interior of the building featured Adamesque design elements, with painted ornaments and pastel color schemes.

In 1889 The Ivy Lodge of the Knights of Pythias bought the building and transformed its exterior with the addition of a prominent façade with a central semicircular cornice and a large attic fanlight, converting the Greek Revival church into a Neo-Classical lodge hall. The Knights held onto the building for nearly half a century.

The Rushville Boys’ and Girls’ Club took over in 1942 followed in 1999 by the Rush County Players. Unfortunately, the cost of upkeep became too much for the small non-profit, and the building quickly fell into disrepair, at one point it was even considered for demolition.

Salvation came after Rushville was declared a Stellar Community and the city partnered with Southern Indiana Housing Community Development Corporation and Milestone Ventures to invest in the failing structure. The landmark, now dubbed “The Windsor,” will be restored and adapted as apartments, expected to open this fall.

For more information about the renovation or other projects in Rushville, contact Indiana Landmarks’ Eastern Regional Office, 765-478-3172, east@indianalandmarks.org.