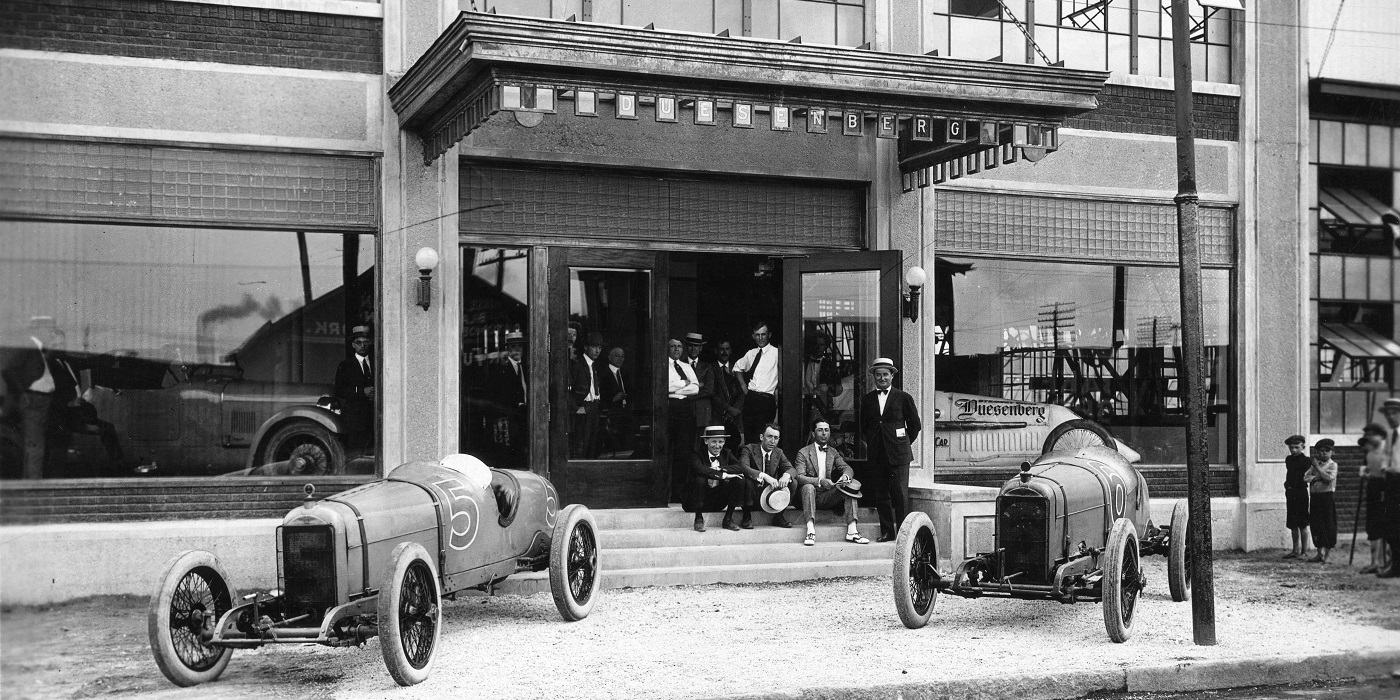 In 1920, emboldened by success in manufacturing marine and racing engines, brothers Frederick and August Duesenberg relocated their New Jersey manufacturing facility to Indianapolis. Many of their engines had run in the Indianapolis 500, and they aimed to produce their own automobiles. Indianapolis offered the ideal location, with an established network of auto suppliers and access to the Indianapolis Motor Speedway for use as a test track.

Duesenberg Automobile and Motors Company operated on 17 acres at 1511 West Washington Street from 1920 to 1937. Often bedecked with bunting and flags, the factory became one of the highest profile auto manufacturers in the city owing to its prime location on the National Road. 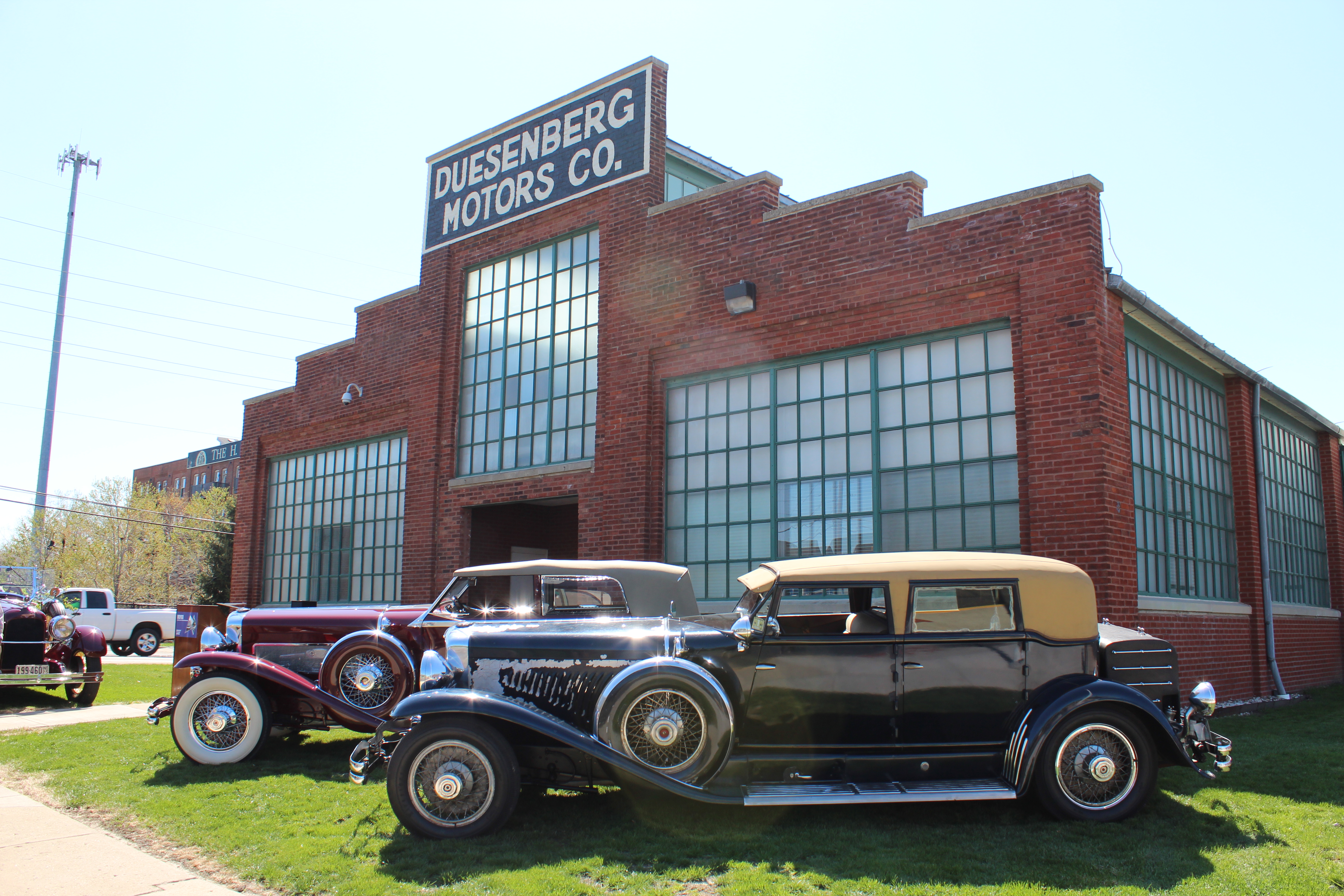 In 2014 Indiana Automotive worked with IndyGo to restore the Duesenberg sign on the brick façade of what is now the bus company’s headquarters at 1501 West Washington St., Indianapolis.

The sole surviving building at the West Washington site still bears the Duesenberg name, thanks to Indiana Landmarks’ Indiana Automotive affinity group. As one of its first projects, the group worked with IndyGo in commissioning artist Christopher Blice of Blice Edwards to restore the Duesenberg sign, then faintly visible, painted on the brick façade of what is now the bus company’s headquarters.

A little known and now lost building (destroyed by fire in 2003) was the Duesenberg Race shop, housed just across the street at 1532 West Washington on the second floor of Thompson Pattern Works. There was no elevator in the small two-story building, requiring race cars be rolled outside from the second floor. Remarkably, one of the most successful American racing teams of the ’20s emerged from this humble structure. 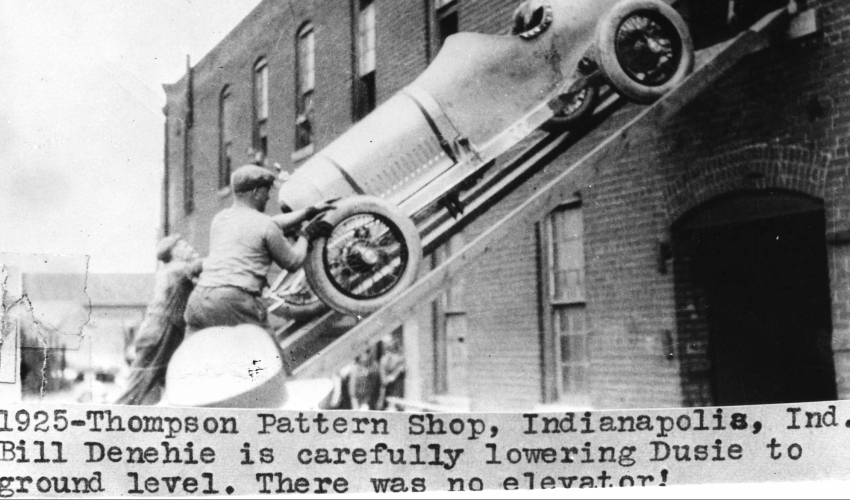 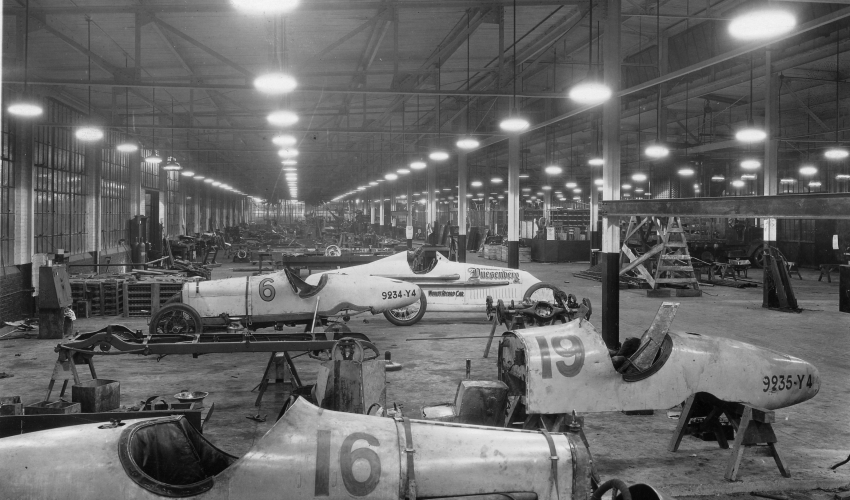 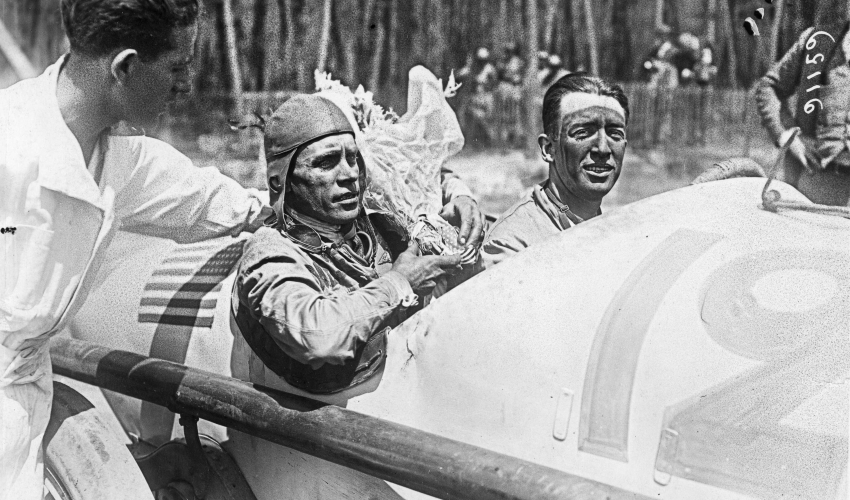 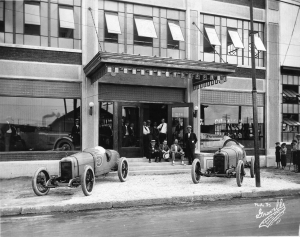 The Duesenberg brothers’ reputations had been forged in racing and competition from the very beginning of their careers at Mason Motor Car Company in Des Moines, Iowa and their emphasis on performance continued when launching their own automobile. They employed talented and now legendary drivers they knew from previous racing efforts and experienced immediate success winning the French Grand Prix in 1921 – the first American car to do so.

A true win in the Indy 500 eluded the team for a few more years. In 1922, Jimmy Murphy won with a Duesenberg chassis although he had fitted a Miller engine to it after breaking with the Duesenberg team. Duesenbergs took 7 of the top 10 places that year, not counting Mr. Murphy’s car. The first outright win came in 1924 with L. L. Corum in first place and Pete DePaolo in sixth. The team repeated in 1925 with DePaolo setting the first 100-plus-mile-per-hour average speed at 101.127. In 1926, the best the team could muster was fifth place with Ralph DePaolo, but they won again in 1927 with George Souders piloting his car from a 22nd-place position to the winner’s circle. 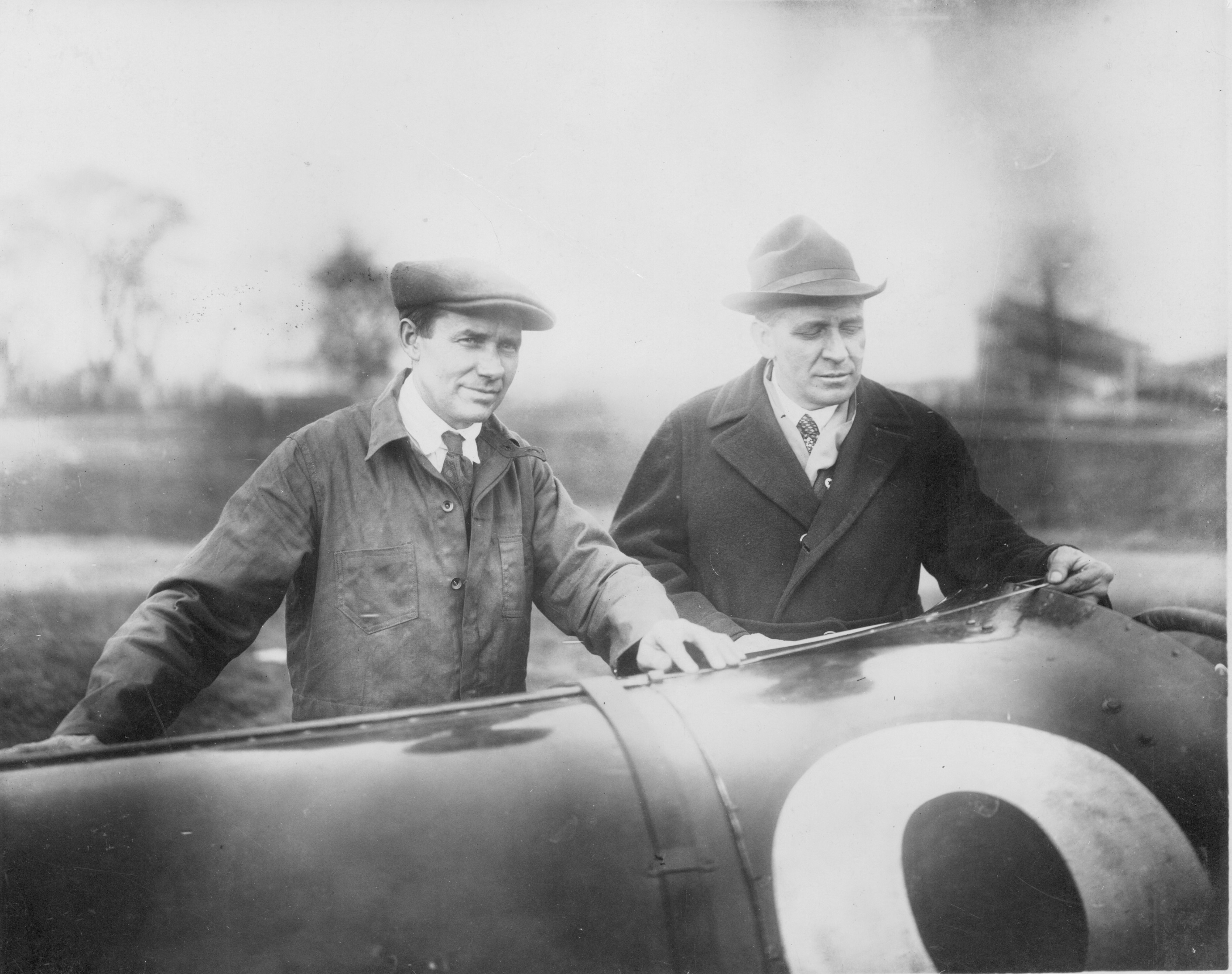 By 1926 the Duesenberg Motor Company was in receivership as competition was steep in the market niche for high-priced luxury cars. E.L. Cord, Auburn Automobile Company president, purchased Duesenberg and absorbed it into his conglomerate. He then instructed the Duesenberg brothers, to their surprise, to design and build an even more expensive car than they’d been producing. The brothers were skeptical, but out of this challenge came the legendary Duesenberg Model J. Introduced in 1928, the Model J became a coveted status symbol for the rich and famous of the late ’20s and ’30s, driven by the likes of Al Capone, Mae West, Clark Gable, Gary Cooper, and even members of European nobility. 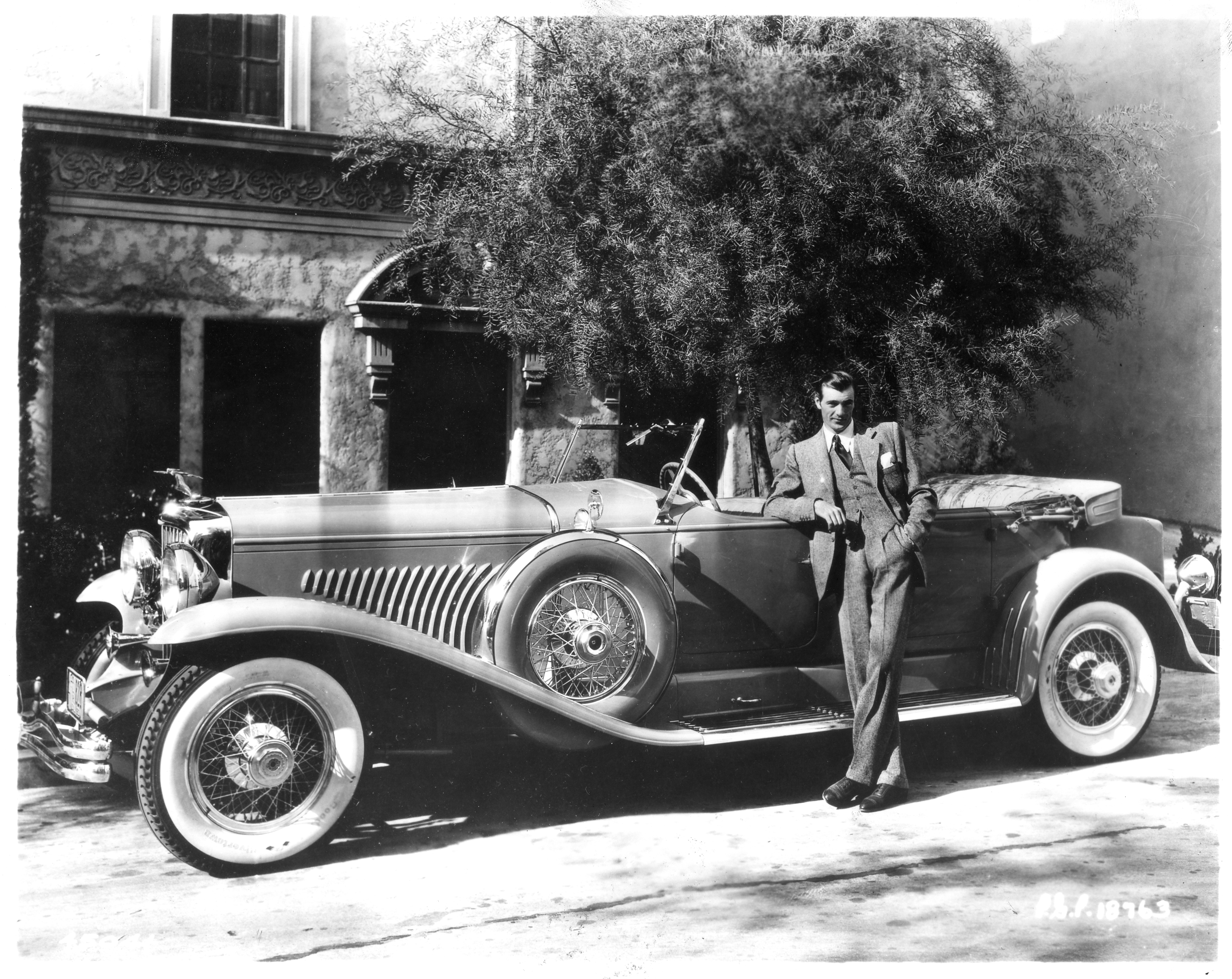 Despite new ownership and the Model J’s popularity, Cord and Duesenberg were ultimately unable to compete with the lower-cost cars in increasing demand during the Great Depression. The company went bankrupt, ceasing production in 1937. 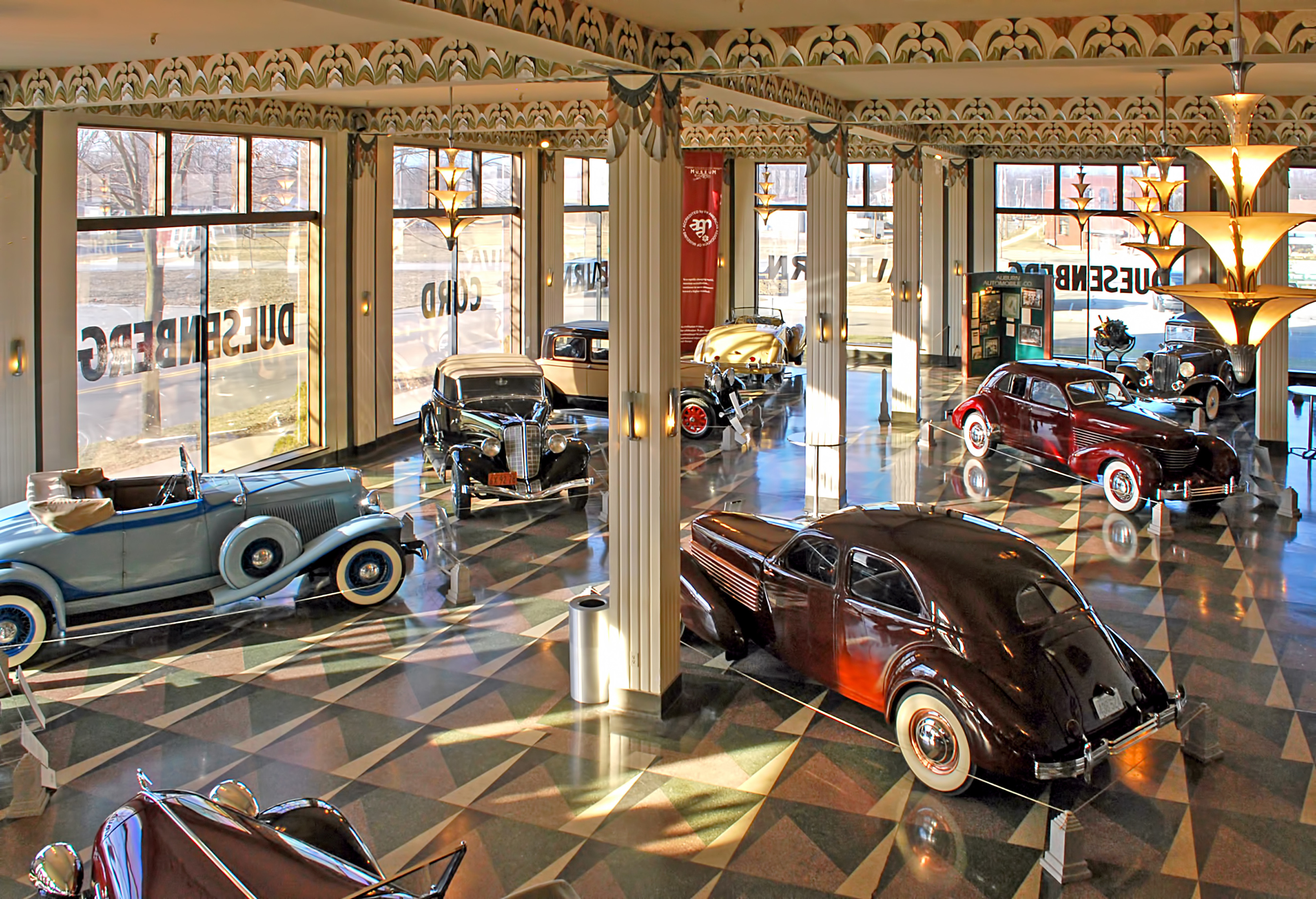 Today, the Auburn Cord Duesenberg Automobile Facility in Auburn remains the most visible reminder of the Duesenberg legacy in Indiana. Nonprofit Auburn Automotive Heritage, Inc. rescued the magnificent Art Deco landmark in 1974, reopening the site as a museum. Visitors can view an impressive collection of over 120 classic, antique, and special-interest cars – including plenty of Duesenbergs – on the museum’s three floors. Through a nomination submitted by Indiana Landmarks, the site was named a National Historic Landmark in 2005 for its unique heritage and architecture, a status shared by only 42 sites in Indiana. 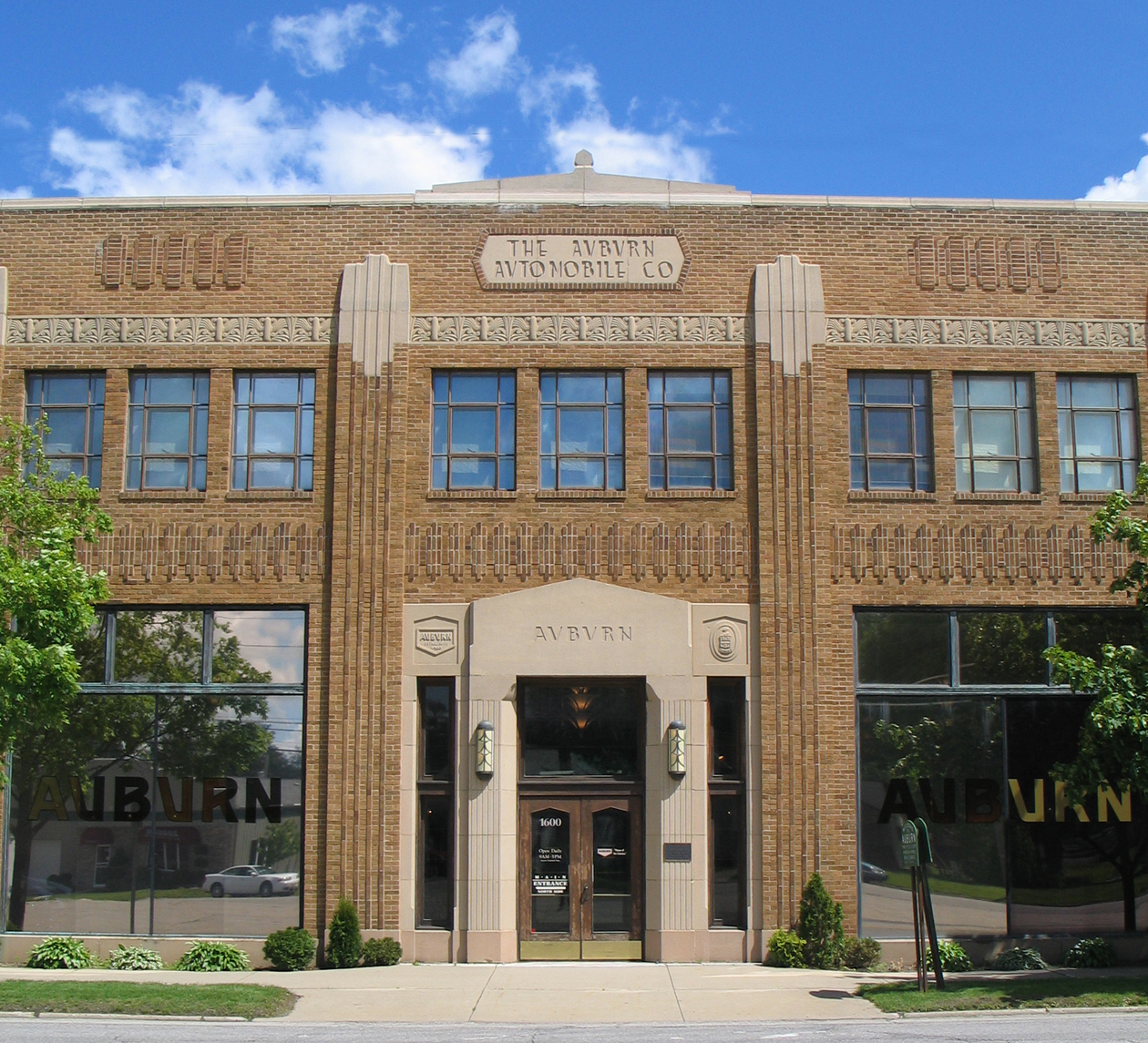 The Auburn Cord Duesenberg Automobile Facility was named a National Historic Landmark in 2005.

Special thanks to Shawn Miller for his contributions to this article.