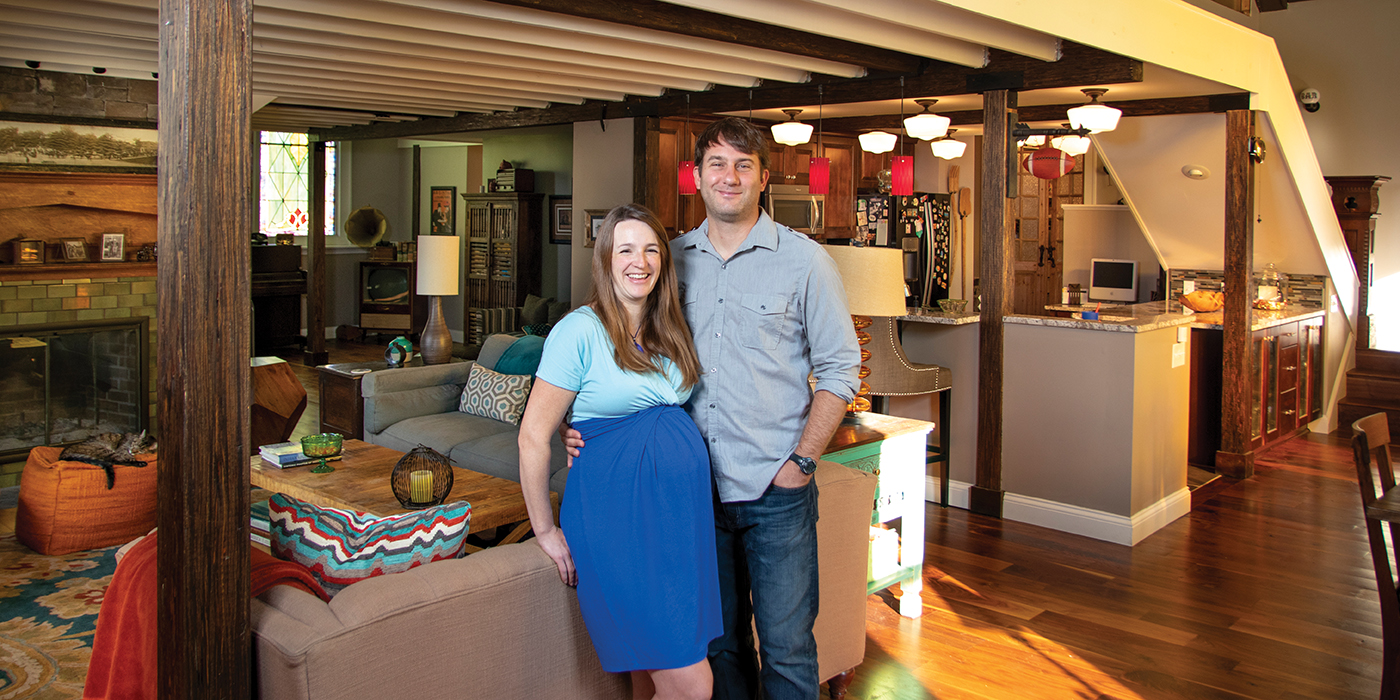 No matter the weather outside, stained glass windows cast a golden glow over the dining and living room of Joel and Lauren Harsin’s home, located in the former Second Christian Church in Indianapolis’s Ransom Place neighborhood. Beneath a newly constructed loft in the former sanctuary, a two-sided fireplace offers a cozy seating area. A sturdy wooden table with mismatched seats sits under a stained glass window. A few steps from the newly built kitchen, a salvaged twentieth-century organ sits on a stage where the choir once sang, while the kitchen pantry occupies the former baptistery. It’s a dramatic transformation that those who saw the Craftsman building in its “before” state can hardly believe.

Built in 1910 at the corner of 9th and Camp streets, Second Christian Church held a treasured place in the city’s African American community. The church’s early pastors served as directors of Flanner House, a pioneering social service agency. While it continued to serve various congregations in the intervening years, by 2007, the building was vacant and decaying, with peeling paint and gaping holes in the roof.

To save the historic church, Indiana Landmarks gained temporary custody through court-ordered receivership. We stabilized the building, repainted the exterior, rebuilt the roof, replicated decorative bargeboard, repaired masonry and addressed structural issues. When the owner couldn’t repay the cost of repairs, the 4,400 square-foot landmark went on the market. 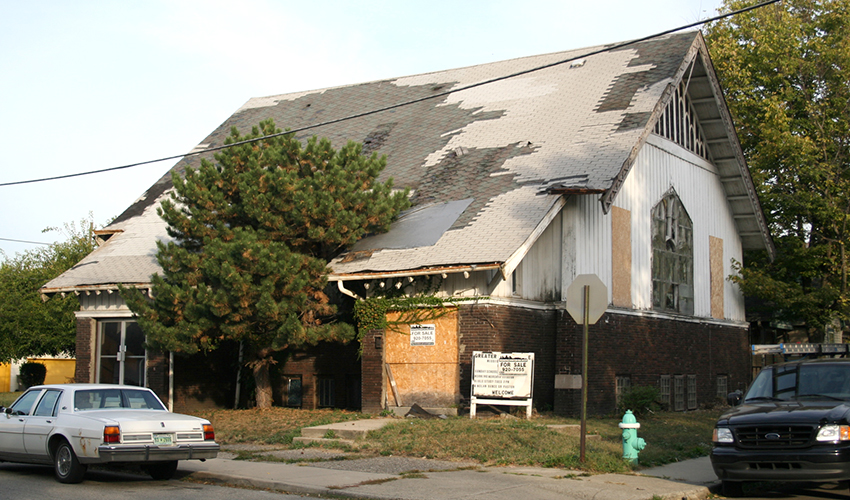 Indiana Landmarks rehabbed the exterior of Indianapolis's Second Christian Church in Ransom Place to save it from demolition. This 2007 photo shows it in its "before" stage. 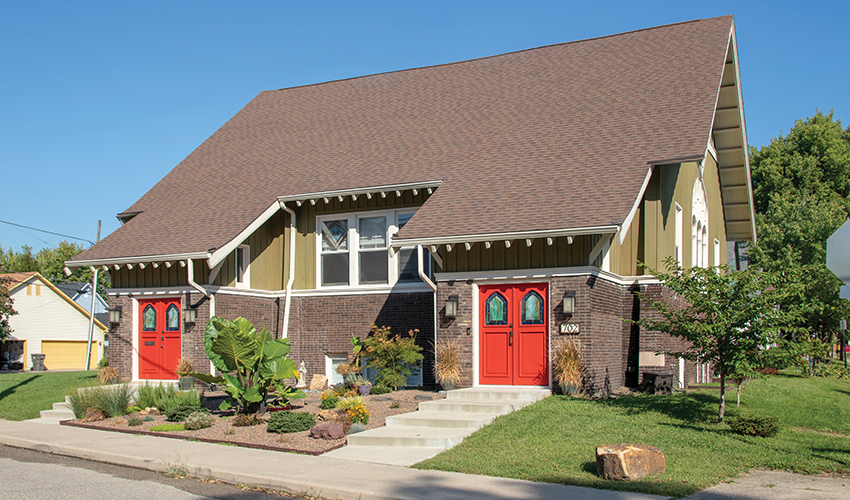 Indiana Landmarks rehabbed the exterior of Indianapolis's Second Christian Church in Ransom Place to save it from demolition. This 2018 photo shows it in its "after" state.
Previous Next

The Harsins had been scouring online real estate listings when they came across the church, admittedly last on their list until they saw it in person. They admired the solid construction and saw the former sanctuary as an adaptable open box. “We were intrigued by the idea of having an unusual property that wasn’t your typical house,” says Lauren.

The biggest obstacle came in trying to secure a construction loan so they could begin adapting the interior for their needs. “It wasn’t long after the housing crash and no one wanted to take a chance,” says Joel. “It was a months-long process.”

The couple closed on the property in late 2013, but Indiana weather threw a wrench in their construction plans. The new loft they planned to construct in the sanctuary needed to have its footers anchored in concrete in the basement to support the weight of the system. Multiple days of subzero temperatures in January made it impossible to pour the concrete, delaying construction for a month and putting the Harsins in a time crunch for completing the project within the parameters of the six-month loan. In the meantime, they completed other jobs as they could in the yet-to-be-insulated space.

“We would plead our case every month,” says Joel. “We finished up with the required work just as they were sick of us asking for extensions.” “While we were in the demo stage, friends kept asking us, ‘Are you sure about this?’ adds Lauren. “We never lost sight of what it could be.”

Both came to the project with hands-on DIY experience. Joel, a firefighter with the Indianapolis Fire Department, had renovated his 1918 home in Irvington. Lauren, an interior designer, had helped renovate the historic commercial building that holds her mother’s home furnishings business, Chatham Home. Though they worked with contractors to complete framing and drywall, they also put in a lot of sweat equity. Lauren wired the building, with an electrical contractor checking her work, and installed toilets and faucets. The couple worked with Kokomo Opalescent Glass to recreate missing panes in the stained glass windows. “There’s nothing in here that we didn’t use or find a way to make part of the building,” says Lauren. 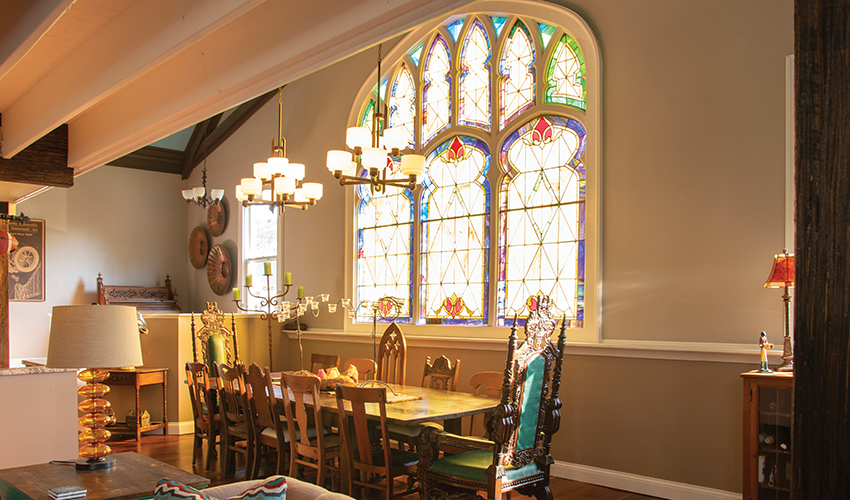 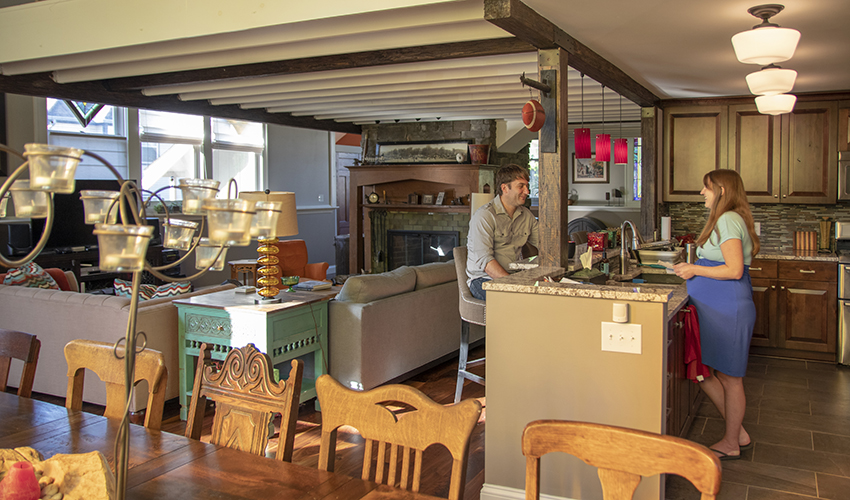 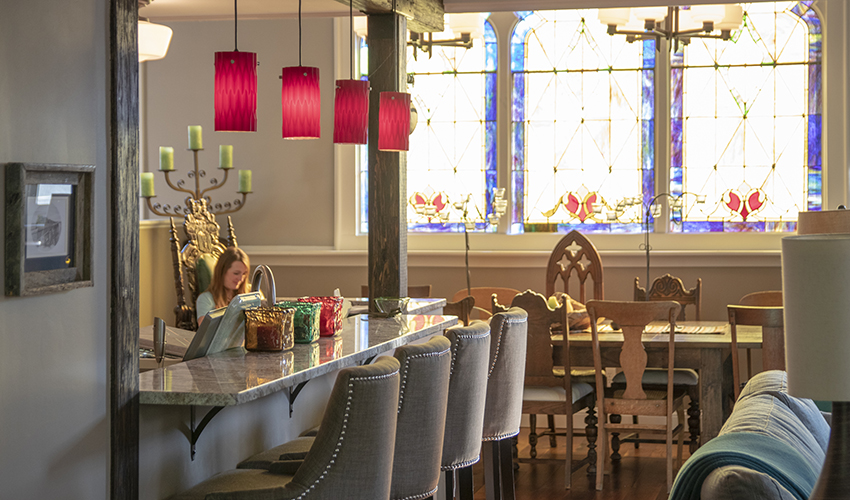 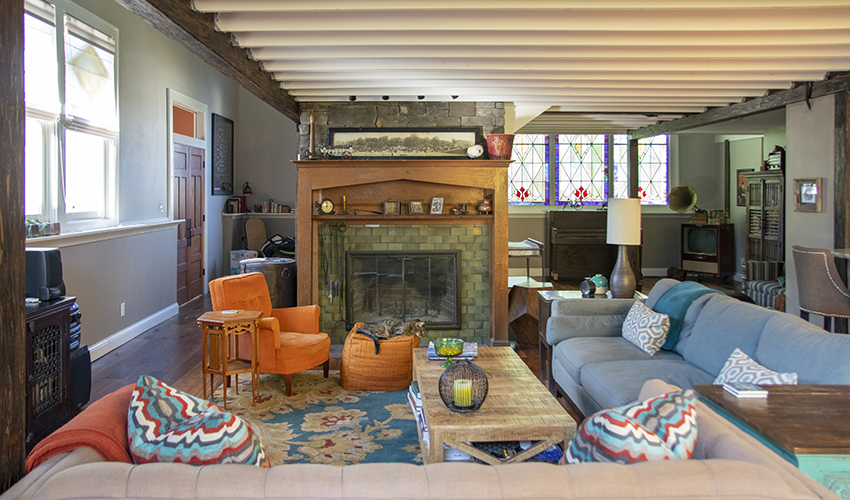 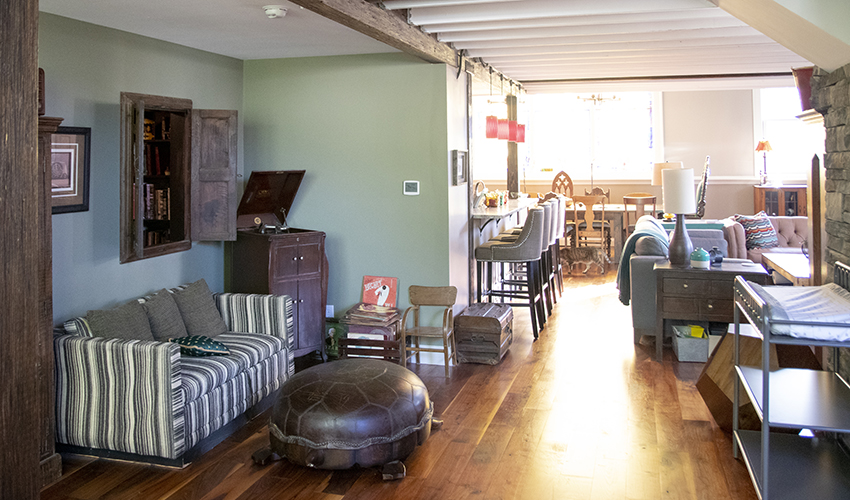 Beneath the newly constructed loft in the former sanctuary, the Harsins installed a new kitchen and cozy seating area, filling the space with antique finds. (Photo: Evan Hale)
Previous Next

The Harsins saved every door they could and any original artifacts they uncovered, including a cabinet on the lower level. Other vintage pieces and hardware came from trips to antique and salvage shops, and Lauren’s mother helped scout antiques and repurposed pieces to decorate the space. Inspired by a church they had visited in Edinburgh, Scotland, they painted the ceiling of the sanctuary blue. Their design for the building incorporated unexpected surprises—a tiny loft in Lauren’s office, and, on the other side of the former sanctuary, a spiral staircase behind a false bookcase that leads to a small den on the lower level.

In the process of bringing the property back to life, they’ve enjoyed meeting and hearing stories from people that hold memories of the building in its church days. “We were fortunate to find it at the time we did and forge a relationship with Indiana Landmarks,” adds Joel. “We felt an obligation and responsibility to the building and its very important history as a cornerstone of the neighborhood.”

Read about other one-of-a-kind homes in the March/April 2019 issue of Indiana Preservation.