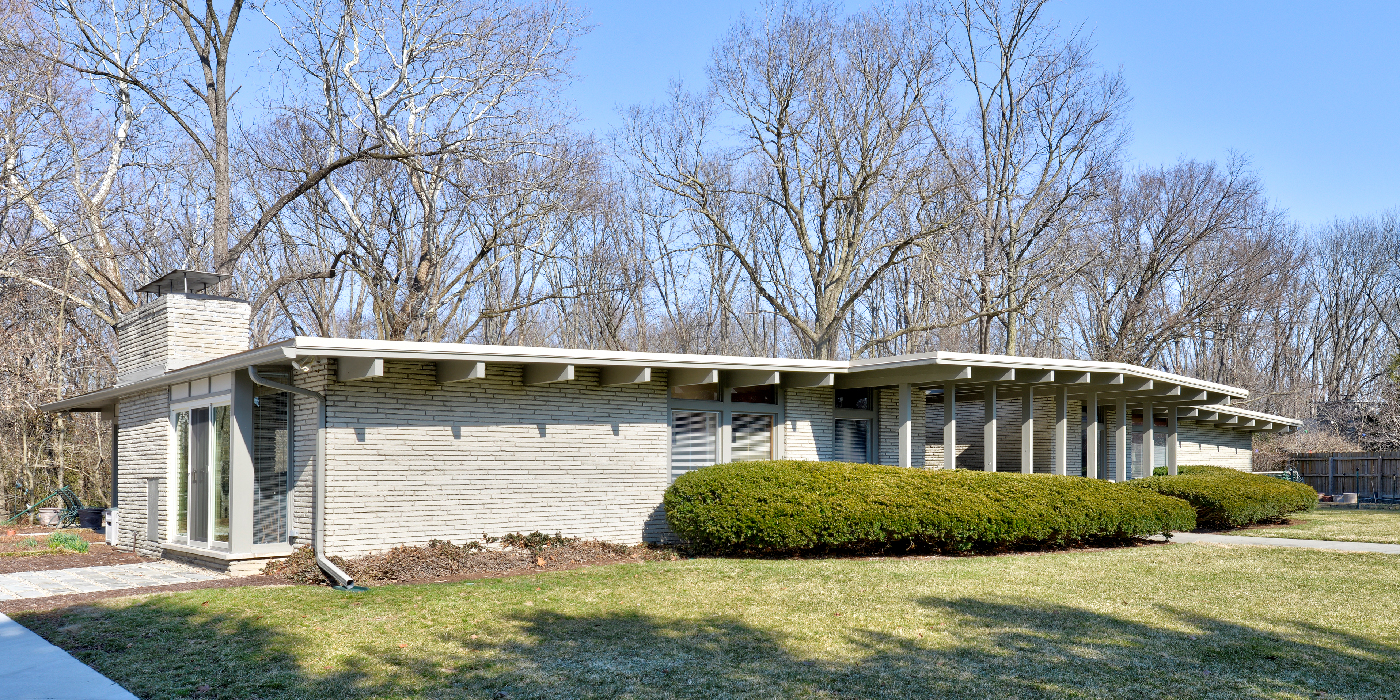 The 1962 Adler-Pugh House in Columbus is one of five Modernist standouts featured on the 2019 Back to the Future Mid-Century Modern Home Tour. (Photo: Garry Chilluffo)
POSTED ON April 24, 2019 BY Indiana Landmarks | Modern Landmarks, Tours

Dr. David Adler was progressive in his practice of medicine, so it’s no wonder he and his wife, Mary, chose to build an avant-garde home. Situated at the end of a cul-de-sac in Columbus’s Riverview Acres subdivision, the house is strikingly horizontal and low to the ground. Its wide eaves rest on a series of cantilevered beams extending from inside the house out through walls of brick and glass. The house is one of five Modernist standouts featured on the 2019 Back to the Future: A Mid-Century Modern Home Tour on Saturday, May 18.

Born in New York City in 1913, Adler moved to Indiana to attend college, graduating from the Indiana University School of Medicine in 1938. After World War II, he moved to Columbus to work as the first dedicated pathologist at the Bartholomew County Hospital. Situated on a rise over the Flatrock River, the Adlers’ 1962 home features floor-to ceiling windows designed to capture expansive views of the natural surroundings. Today, owner John Pugh is captivated by the same scenes. “It’s a beautiful location, with large windows through which I can watch the changing seasons,” he says. 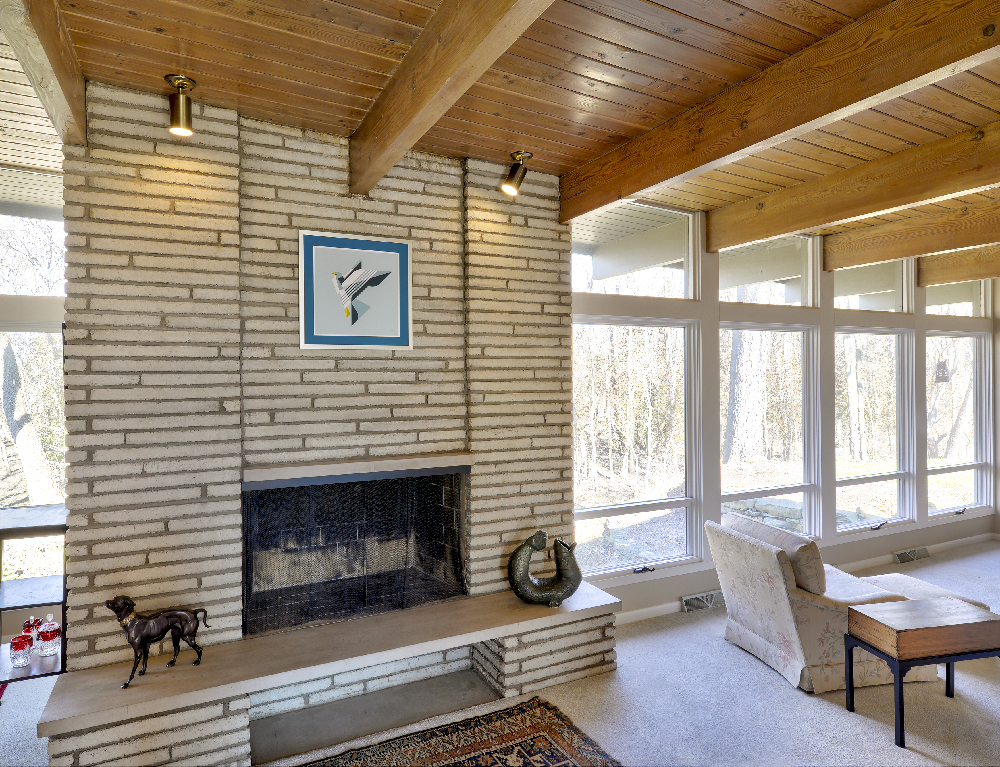 Talivaldis “Ted” Meijers (1926-2012) shaped much of Columbus’s residential landscape during the mid-twentieth century. His local company, Custom Built Homes, is responsible for the Adler-Pugh House’s distinctive design. A Latvian native, Meijers immigrated to the United States with his wife Ruta in 1949, arriving in Columbus in 1951 — where he worked as a carpenter’s apprentice before establishing his construction firm.

Meijers constructed two other homes on this year’s tour, both in the Noblitt Falls subdivision, known as “The Lagoons” for its man-made lakes.

The house he designed in 1963 for Albert “Ab” Schumaker — president of the local Coca-Cola distributing company — and his wife Jacqueline is also situated on a wooded lot along the Flatrock River. Low-slung like the Adler-Pugh House, the Schumaker home features a broad main façade with a central entrance screened behind a masonry wall. The house’s rough-cut fieldstone was likely sourced from nearby Brown County. The home has remained in the family, owned today by Hutch Schumaker — current president of the Coca-Cola Bottling Company — and his sister, Nan Russell.

Elsewhere in the Lagoons, the house Meijers designed in 1959 for orthopedic surgeon Dr. Floyd Mohler and his family now belongs to local businesswoman Julie Aton. Passionate about Mid-Century Modern design, Aton shares her knowledge as a volunteer tour guide for the Columbus Area Visitors Center. “I knew I had to have this house on the very first day I toured it at the open house back in 2015,” Julie says. “I made an offer that same day, and have enjoyed furnishing it with period furniture and art.”

An architectural standout, the home’s post-and-beam construction supports a broad, central gabled roof with a window wall overlooking the lake behind the house. Coupled with the wide, screened-in back porch, the views give the home the feeling of a lakeside resort. 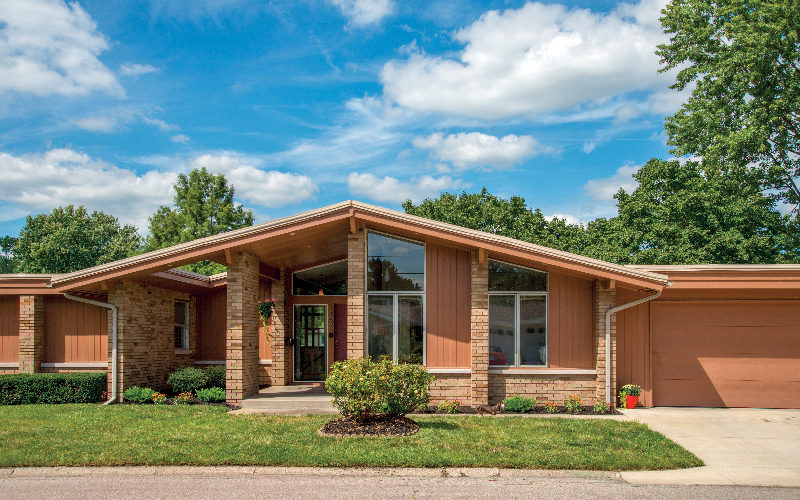 Julie Aton fell in love with her 1959 home the first time she saw it. (Photo by April Knox Photography) 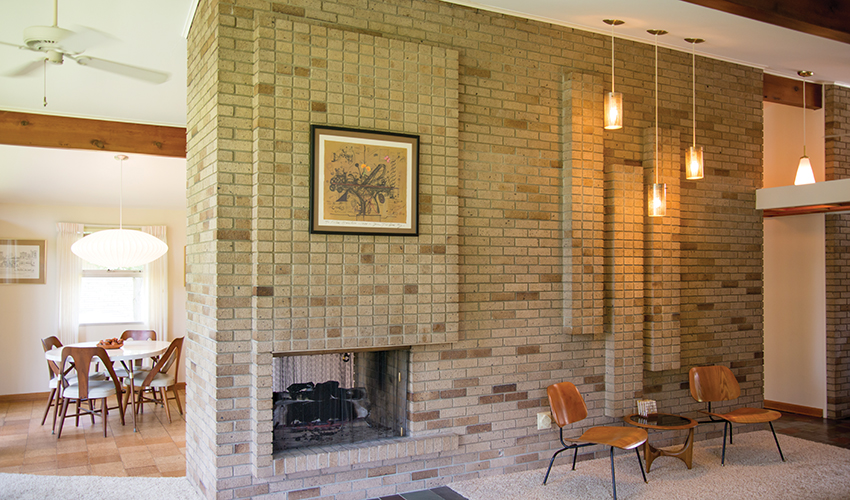 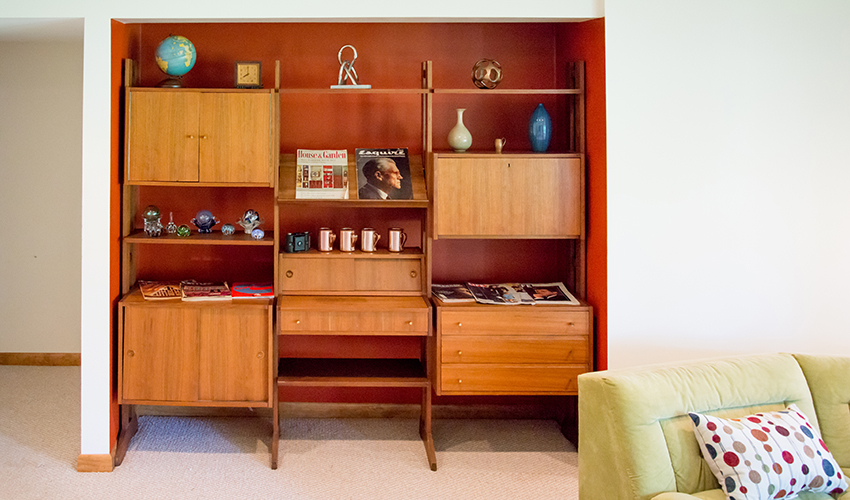 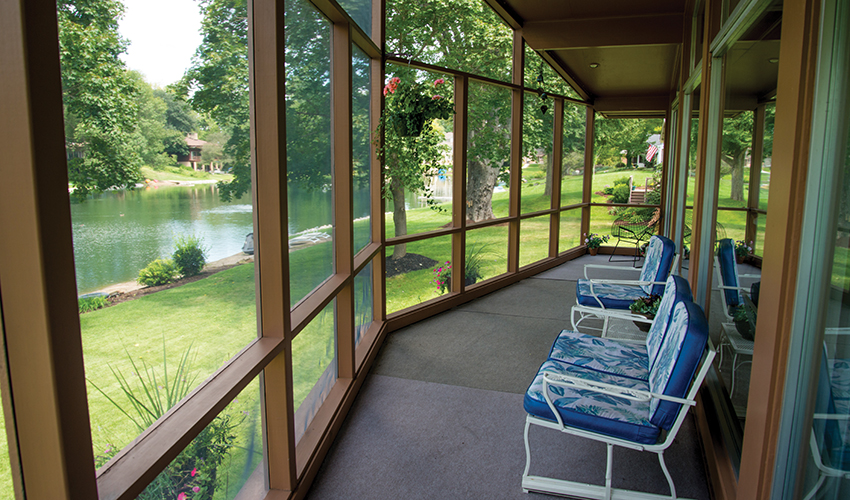 A wide, screened-in back porch with views of a lake gives Aton's home the feeling of a lakeside resort. (Photo: April Knox Photography)
Previous Next

The house is filled with features considered state-of-the art in the late 1950s, including a built-in hamper that can be loaded in the master bathroom and unloaded in the adjacent laundry room. A Westinghouse electrical dock in the kitchen includes designated outlets for a coffee maker, popcorn machine, and electric griddle. The floor-plan illustrates progressive ideas in residential design, including a master bedroom separated from the other bedrooms, a finished walkout lower level with family room, and a single informal dining space.

Architect Donald Hodler designed and built the house next door to Aton’s in 1958 for the family of Edwin and Anna Burd, longtime operators of a local dry-cleaning business. Like several of the other tour homes, the house sports a broad front-gabled roof with wide eaves resting on extended ceiling beams. The roof gives balance to an otherwise asymmetrical front façade featuring varied window shapes and a classic carport. Larry and Shirley Duncan own the house today. 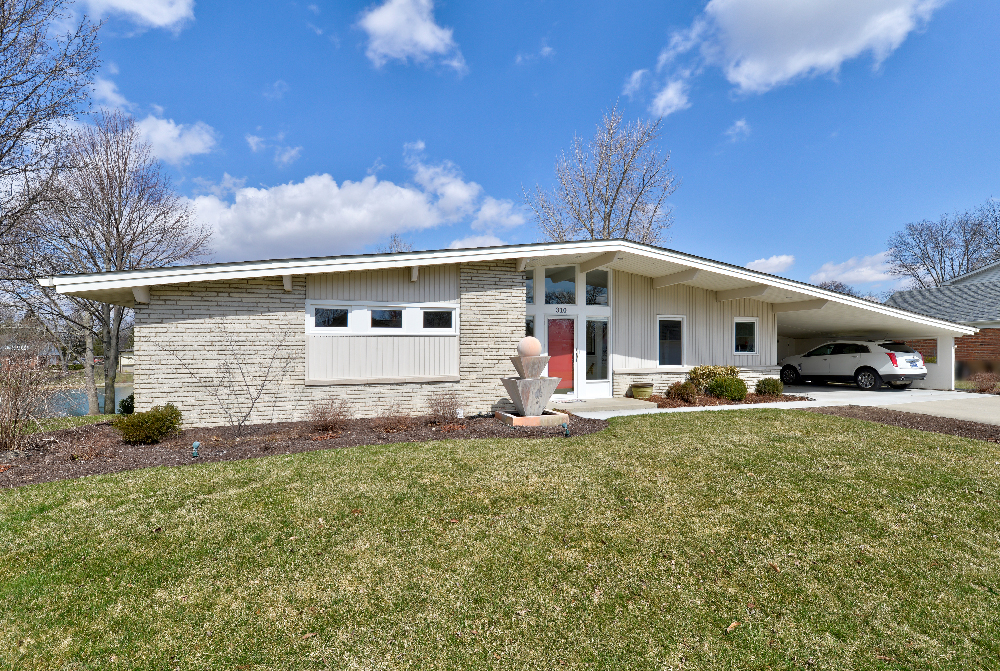 Timothy and Anna Denoyer own the fifth house on the tour, which is located only a short stroll from the famed Miller House and Garden. Completed in 1962, the Denoyers’ L-shaped home embodies many defining features of Frank Lloyd Wright’s Usonian style, including a flat roof and a ribbon of broad windows set high in the main façade, offering privacy from the street. The home’s main attraction is hidden behind its façade — an internal courtyard surrounded on three sides by interior rooms with large expanses of floor-to-ceiling windows overlooking the rear landscaped yard. 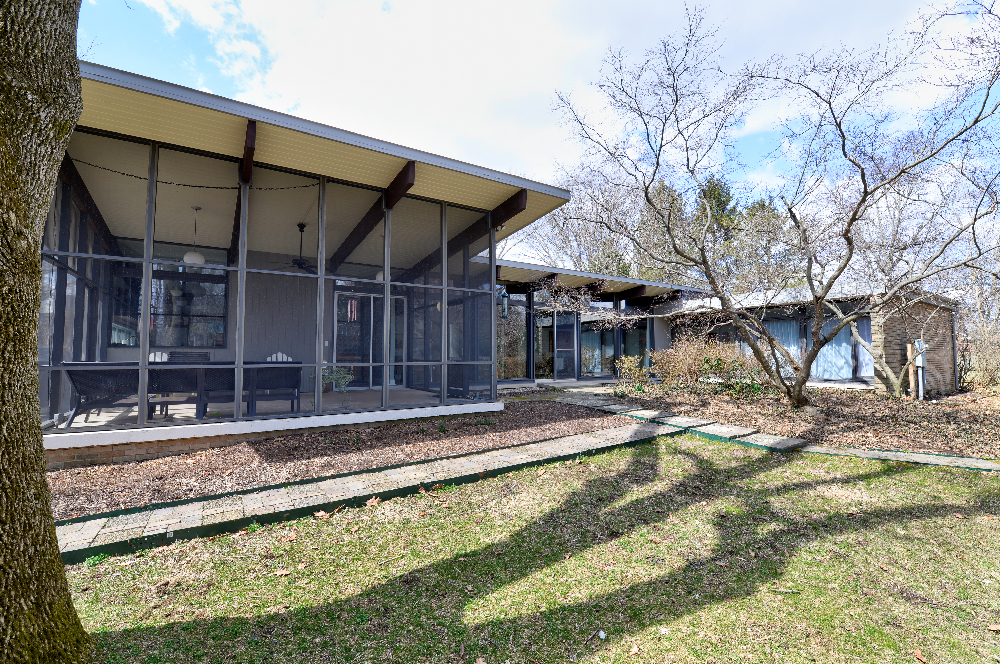 The 1962 home of Timothy and Anna Denoyer features a semi-enclosed courtyard behind the house. (Photo: Garry Chilluffo)

The Back to the Future tour runs from 1 to 6 p.m. on Saturday, May 18.  Shuttle service begins at North Christian Church and will take guests to all stops on the tour. Parking will also be available at North Christian. Advance tickets are $20 for non-members, $15 for Indiana Landmarks members, and $10 for Indiana Modern members. Day-of-tour tickets will be $25. For more on the tour’s headquarters and ticket outlets, call 317-639-4534 or visit the event page.