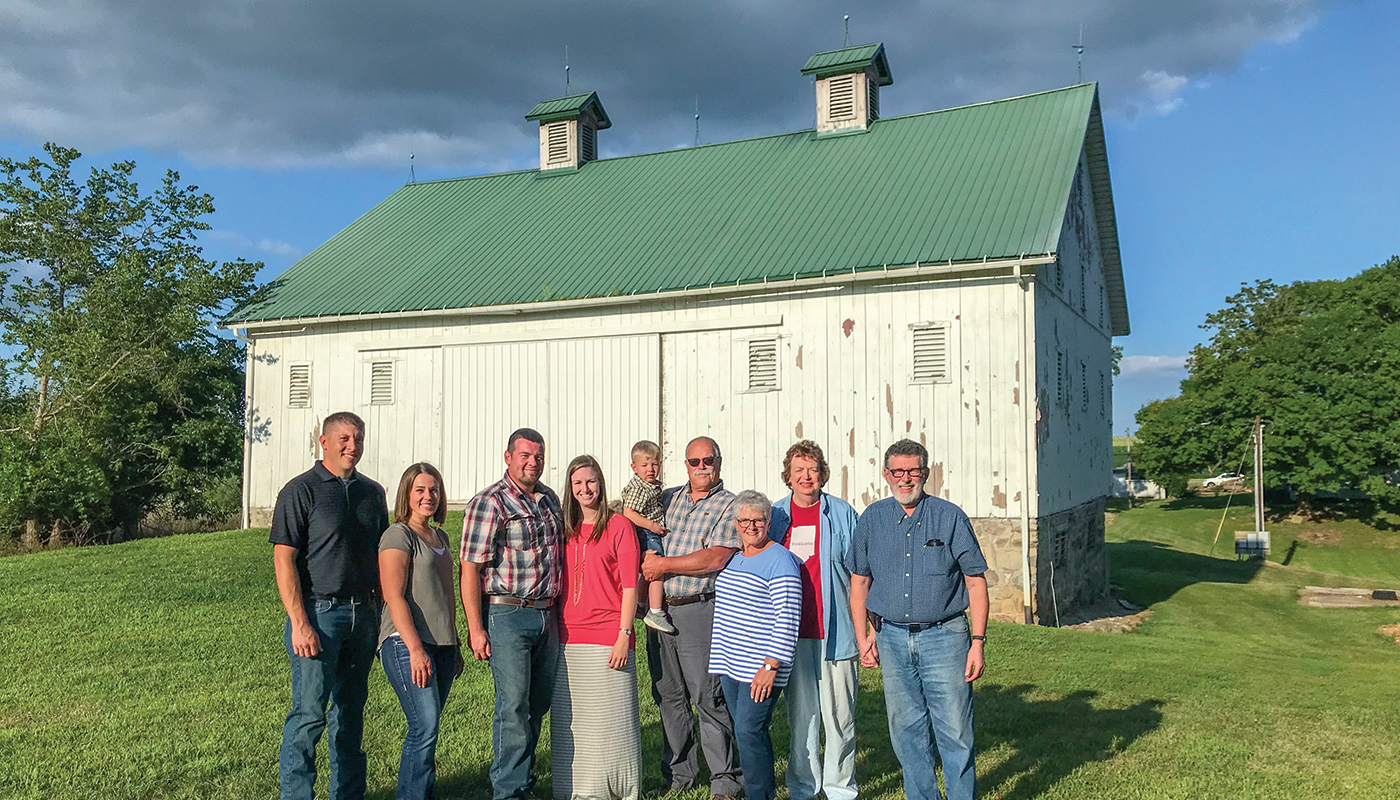 Keeping it in the Family

For the Mears family of Carroll County, the operation and stewardship of not just one, but two historic farms near Delphi is an enterprise spanning decades and generations. Recognizing their extraordinary commitment, Indiana Landmarks and Indiana Farm Bureau presented the Mears family with the 2019 John Arnold Award for Rural Preservation on August 15 at the Indiana State Fair.

The Mears Farms are in the Deer Creek Valley, a natural area and rural historic district known for its scenic beauty, where shale bluffs, woods, creeks, and rolling terrain blend with historic farms, bridges, cemeteries, and other rural features.

Sherry and Lois Mears purchased the 275-acre family homestead, the historic McCain Farm, in 1949 as relative newlyweds. Over the next more than 60 years, they raised six children there, along with cattle, hogs, and chickens, and corn, soybeans, wheat, hay, and tomatoes. The family lived in the farm’s picturesque 1852 Greek Revival farmhouse and used the c.1880 Sweitzer barn and an early twentieth-century poultry house, garage, and corn crib in farming operations.

“My mother played a big role in saving the historic barn and making sure it was preserved along with the house,” says John Mears. “We’ve all followed in those footsteps.”

In 1966, Sherry and Lois bought the 80-acre historic Royster Farm just down the road across Deer Creek, where their son John and daughter-in-law Mary made their home and raised their children in the nineteenth-century farmhouse. A c.1880 English barn, 1920s poultry shed, and c.1950 concrete block equipment building dot the property. The wealth of historic agricultural structures on both farms played a role in their listing in the National Register of Historic Places as part of the Deer Creek Valley Rural Historic District in 2002.

Maintaining the farms’ heritage is a family priority, so following Sherry’s and Lois’s deaths, their children and grandchildren took steps to make sure both properties remain in the family. John and Mary inherited the 80-acre farm and purchased part of the homestead where John grew up, while their son Benjamin and daughter-in-law Taylor acquired the homestead’s farmhouse and its immediate outbuildings. John’s brother Martin and his wife Nancy own the homestead farm’s woods and tillable farmland. John, who is also a postal worker, leads farming operations at both properties, assisted by his children and brother. 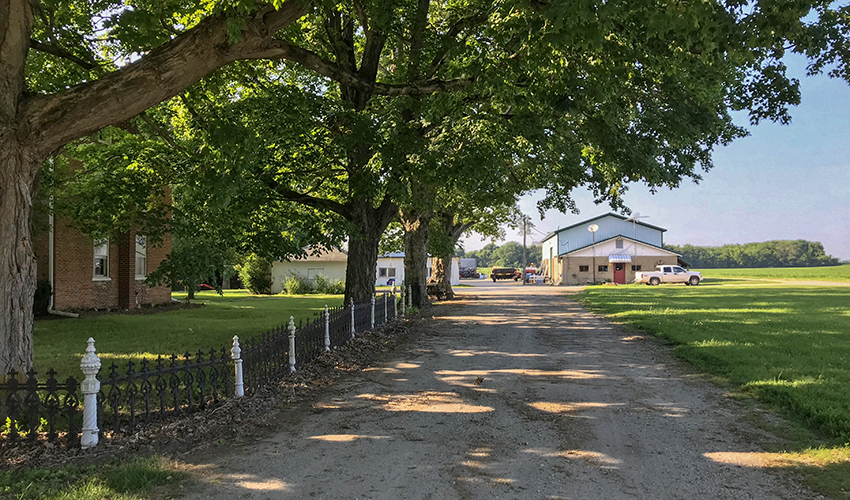 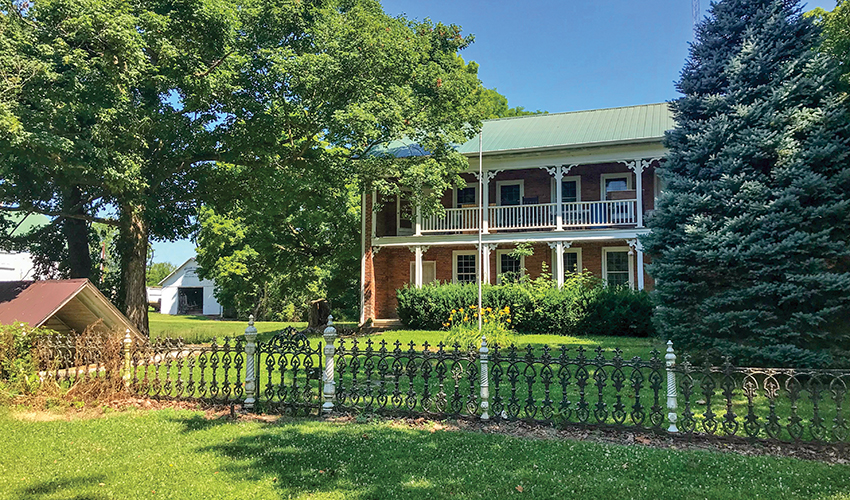 Sherry and Lois Mears purchased the historic McCain farm in 1949, raising their family in the 1852 Greek Revival farmhouse. 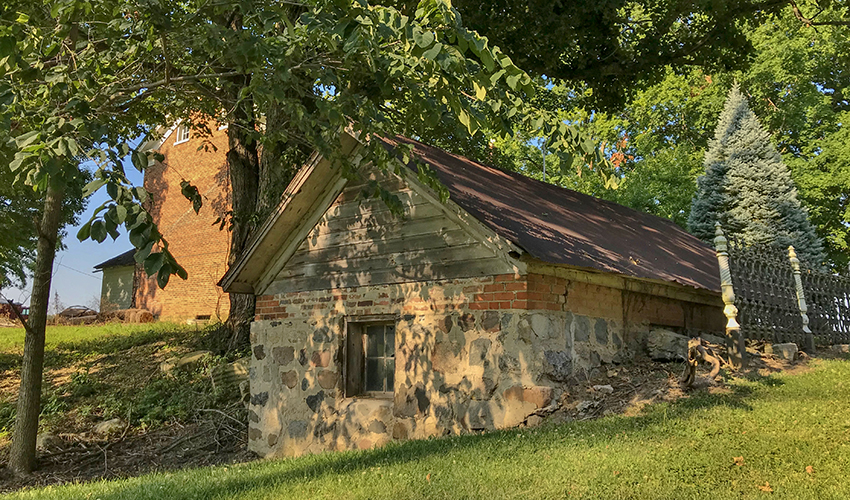 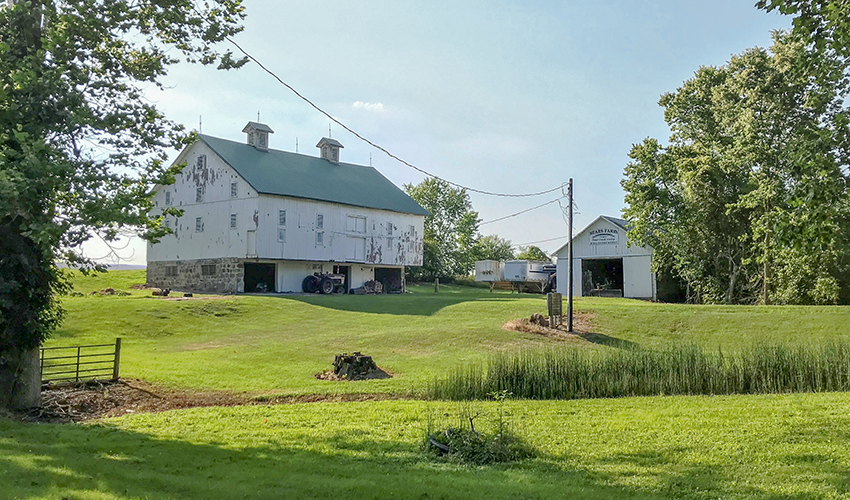 The Mears family has taken steps to preserve a c.1880 Sweitzer barn on the homestead, which houses equipment used in their farming operations. 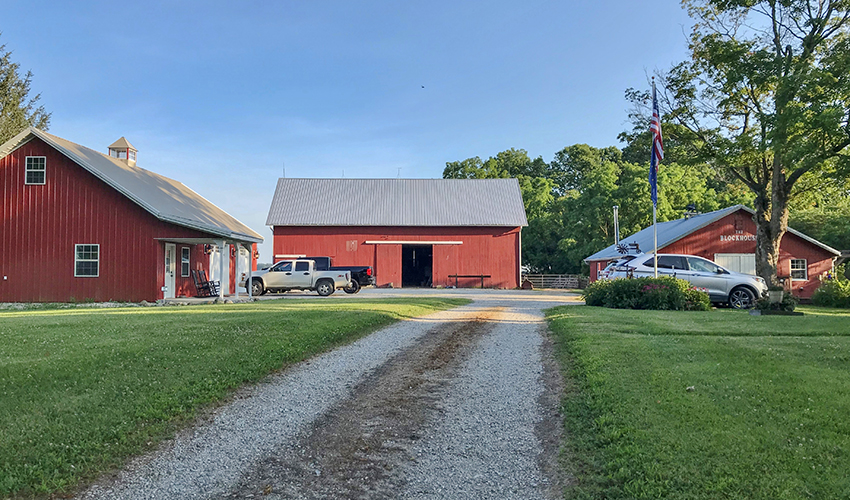 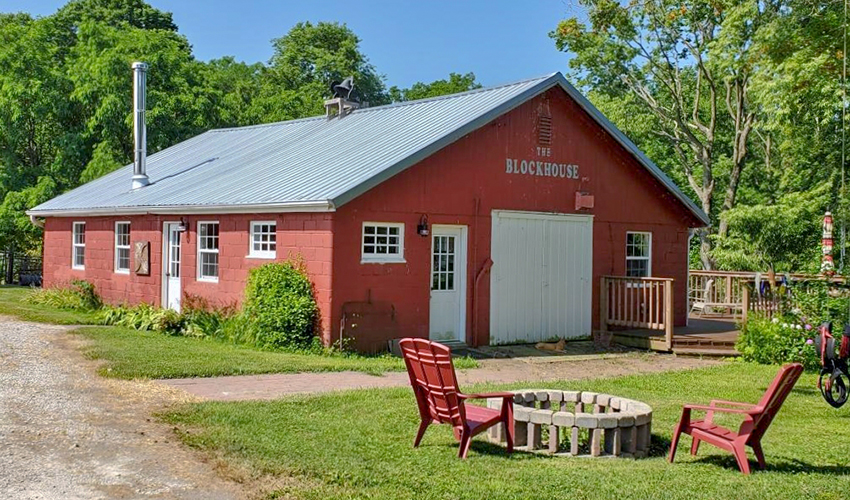 As the family stopped raising as much livestock, the Mears converted the concrete block building into a semi-rustic space fondly called The Blockhouse for family gatherings, receptions, and small events. 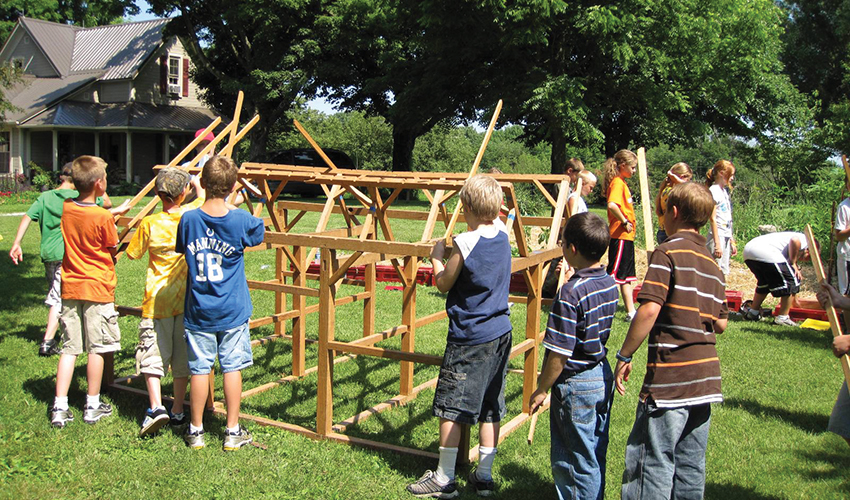 Leading by example, the Mears open their farms for events that teach others about the value of preserving rural heritage, including hosting an ArchiCamp where kids learned about historic barns. 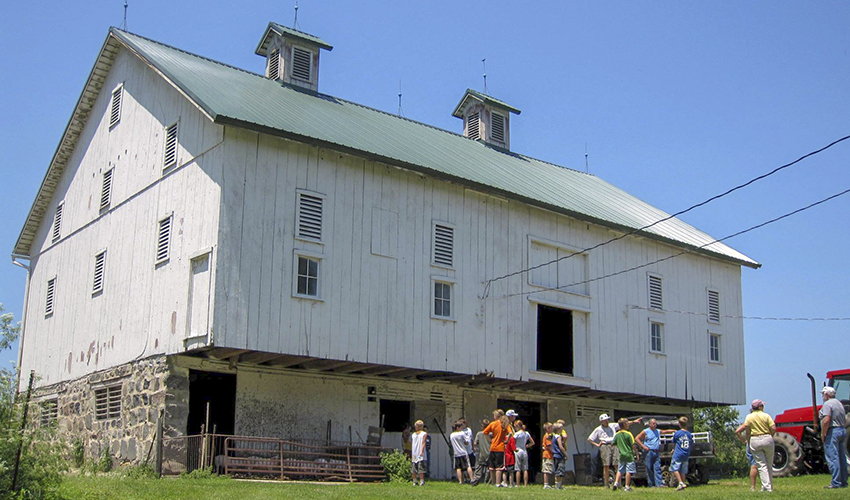 Leading by example, the Mears open their farms for events that teach others about the value of preserving rural heritage, including hosting an ArchiCamp where kids learned about historic barns.
Previous Next

Today, Mears Farms primarily produces cash crops, storing farming equipment in mid-twentieth-century buildings, while the historic barns house smaller equipment and supplies, hay, and John and Mary’s horses, as well as an antique springboard wagon and buggy. Tools and small equipment are stored in the corn crib and poultry sheds. As the family stopped raising as much livestock, they converted the concrete block building into a semi-rustic space fondly called The Blockhouse for family gatherings, receptions, and small events.

Ongoing maintenance ensures the preservation of their landmark buildings. The family recently repaired masonry on the Sweitzer barn’s fieldstone foundation and constructed a new earthen ramp with concrete retaining walls leading to the west threshing bay, ensuring full access to the barn. They plan to have the white frame barn repainted this year.

The Mears family leads by example, not only preserving their historic farms but using them to champion rural heritage in Carroll County and beyond. When the nearby Wilson Bridge over Deer Creek was threatened with replacement in the early 2000s, the Mears built critical local support for rehabbing the c.1898 span. In 2009, the farms provided a dynamic setting for kids ages 8-12 to learn about historic barns and their construction during an ArchiCamp organized by Indiana Landmarks and Delphi Preservation Society. The Mears hosted a Barn Again! workshop in 2012 and recruited extended family members to open their historic barns for a tour, demonstrating how such structures can be used in modern farming operations and be repurposed.

“We feel like if we don’t preserve these buildings, they’re not going to be saved. There are too many that are torn down,” says Mary Mears. “We’ve really been blessed to have so many structures on both of the farms that we can work with and renovate for more modern uses. We wanted our children to grow up with the same priority to save them, and I think they have.”

Learn more about the John Arnold Award for Rural Preservation.