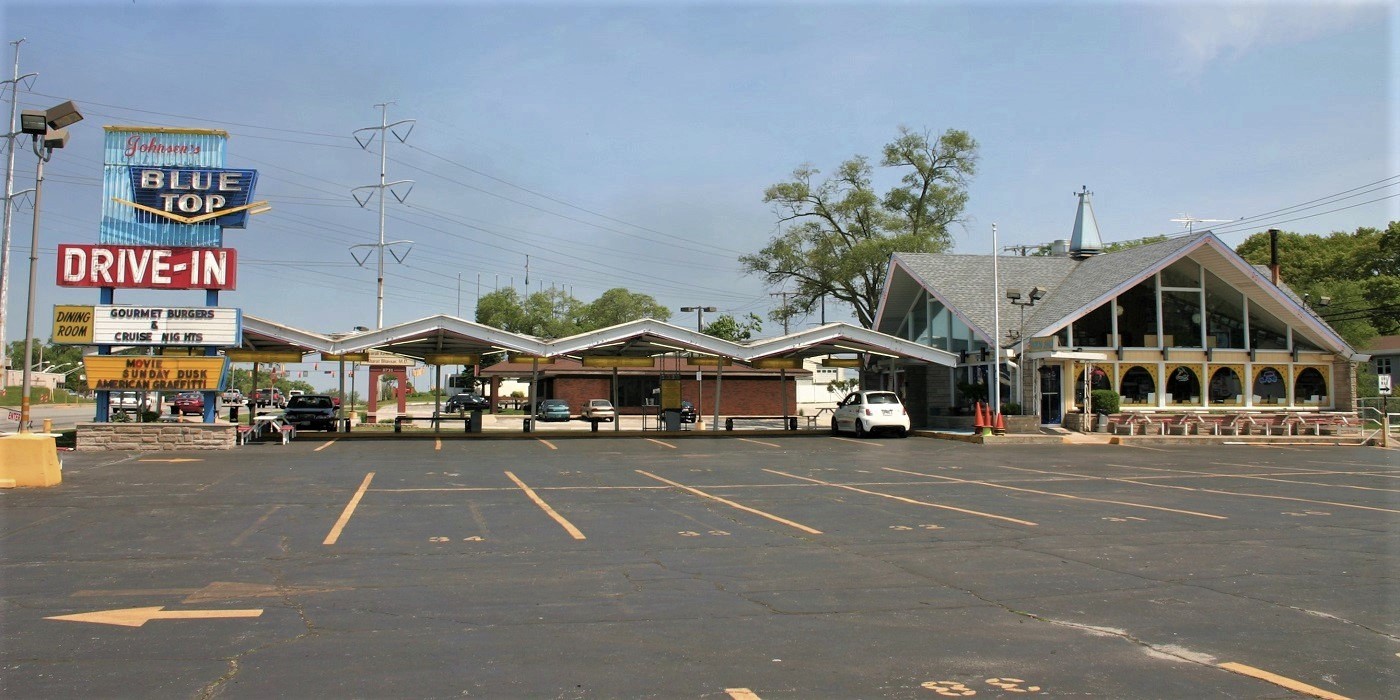 Believe it or not, curbside service goes back to the early 1900s, reportedly linked to a Memphis drugstore owner who offered to bring soda fountain drinks to waiting carriage owners. But the idea of constructing restaurants that specifically catered to people in cars didn’t take off until the 1920s, beginning with simple, rectangular roadside stands.

To attract the attention of motorists, drive-ins took on more eye-catching shapes beginning in the late ’20s and early ’30s. Some employed the popular architectural styles of the day while others used quirky features that reflected the restaurant name or menu specialty, like Indianapolis’s Tee Pee, a ’30s-era drive-in demolished in the ’80s that featured a tee pee on the roof. 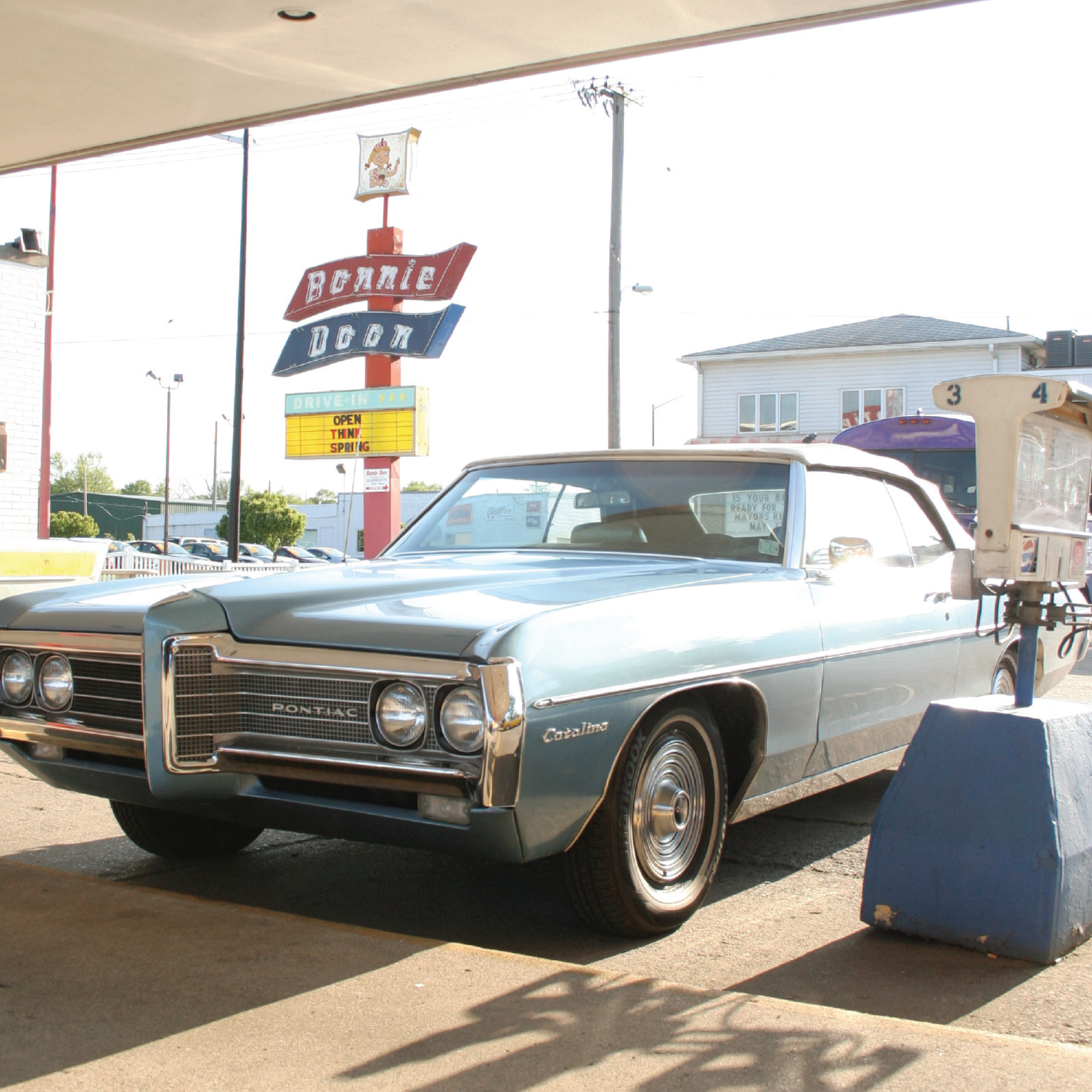 In the 1940s, South Bend ice cream makers Herman and Andrew Muldoon capitalized on the drive-in craze and found a new market for their product by opening the city’s first drive-in restaurant, the Bonnie Doon. It was a hit, expanding to as many as nine locations in St. Joseph and Elkhart counties. The Muldoons’ ice cream factory is gone and now there’s now only one Bonnie Doon, open during the warm weather months at 2704 Lincolnway West in Mishawaka. A flat canopy stretches from the small rectangular building and a curvy vintage sign points the way. Diners can still order Bonnie Burgers and hot dogs from individual speakers and wait for carhops who bring the meal to the car, or dine inside at booths and chrome stools. Ice cream remains the star of the menu, made by local manufacturer Valpo Velvet. 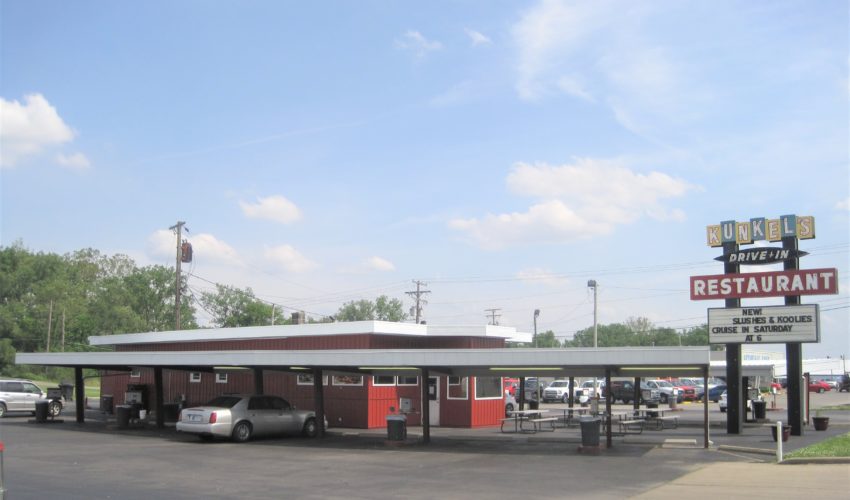 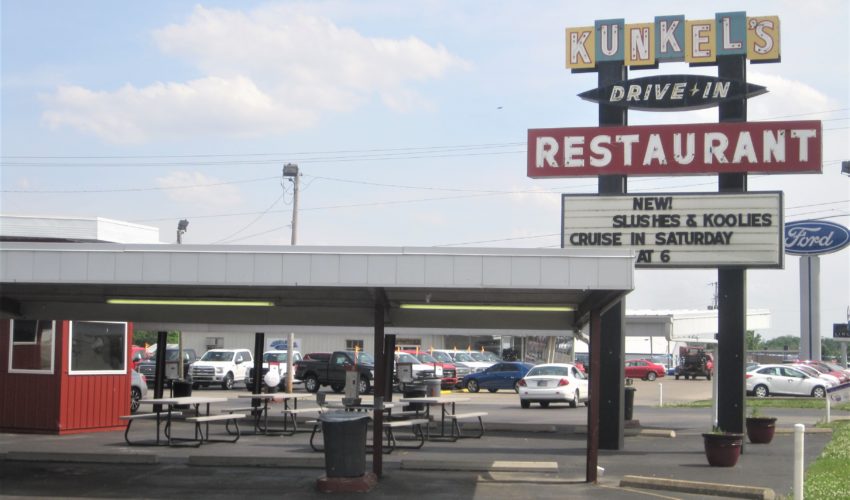 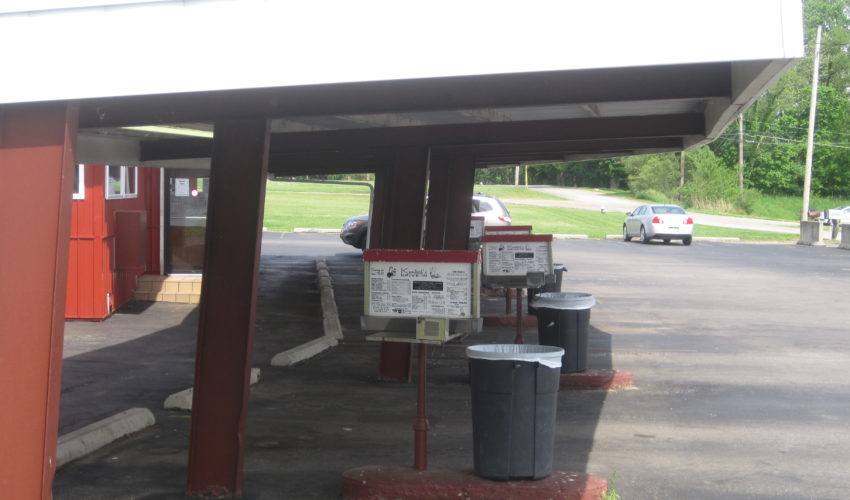 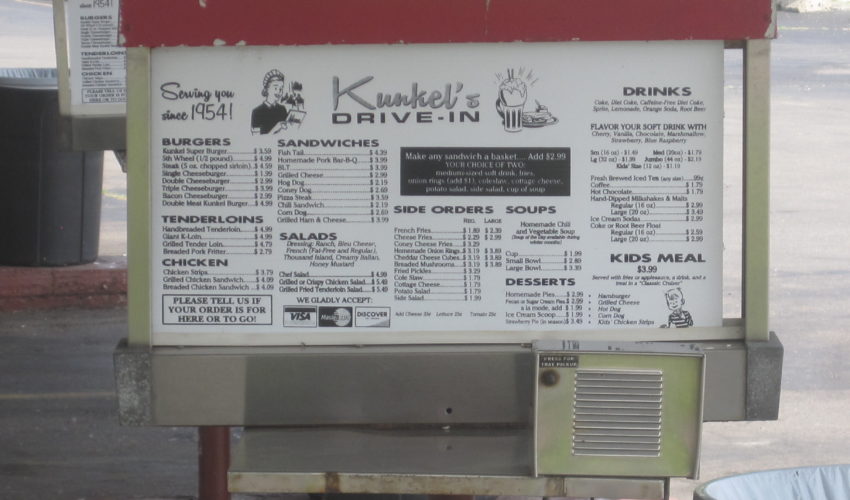 Kunkel’s Drive-In in Connersville, built in 1954.
Previous Next

Drive-ins surged in the ’50s as the automobile reached previously unseen heights in the post-World War II prosperity. The design of the decade’s examples often reflected Modernist influences, like Kunkel’s Drive-In in Connersville, built in 1954. Two slightly angled canopies flank the rectangular, flat-topped restaurant to shelter customers in their cars, who use classic individual speakers to order such delicacies as the Kunkelburger (a double-decker), marshmallow vanilla Coke, and pies. Connersville’s role in early automobile manufacturing earned it the nickname “Little Detroit,” and Kunkel’s provides a natural rallying point for car clubs and summer classic cruise-ins. 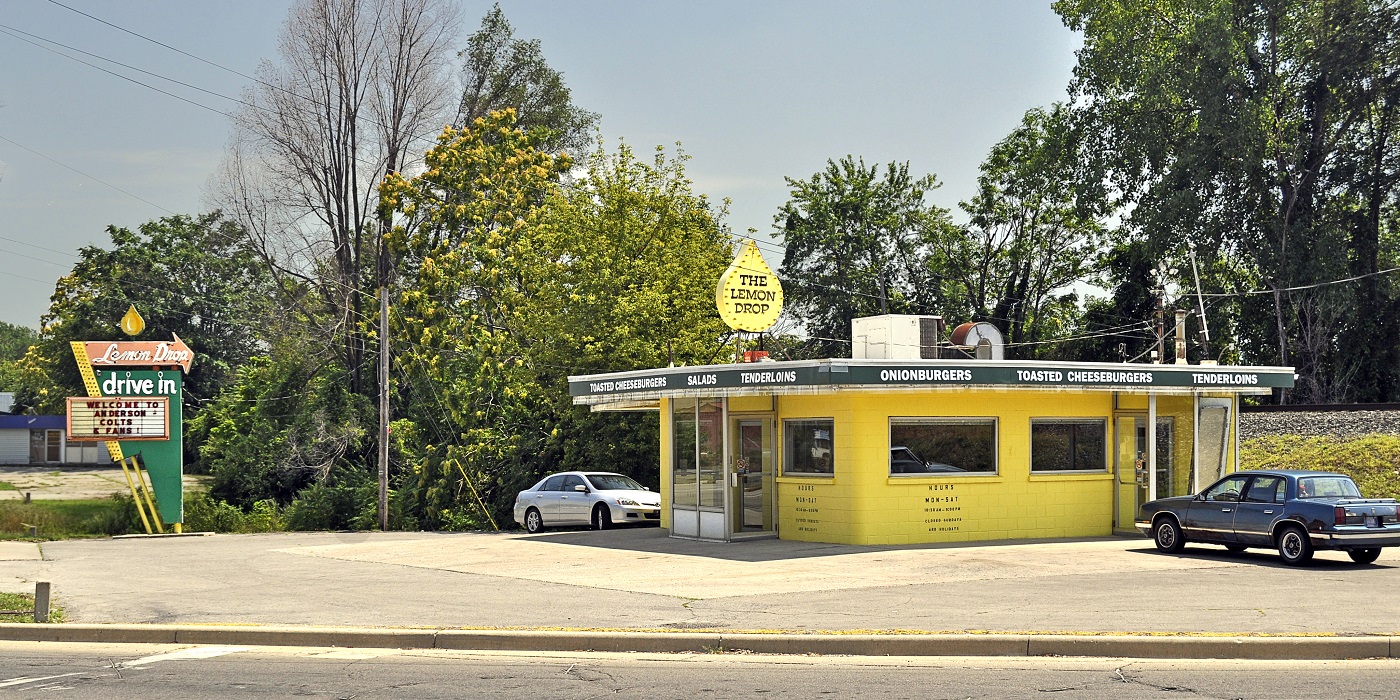 In Anderson, the 1954 Lemon Drop Drive-In reflects the styling of its era in signage and architecture, a tiny cinder-block structure with a flat roof and slightly curved edges. Curb service went away in 1965, but the restaurant kept the “drive-in” moniker, and still draws a crowd (27 people at a time) for its lemon shakes and onion burgers (the onion is stuffed inside the patty). 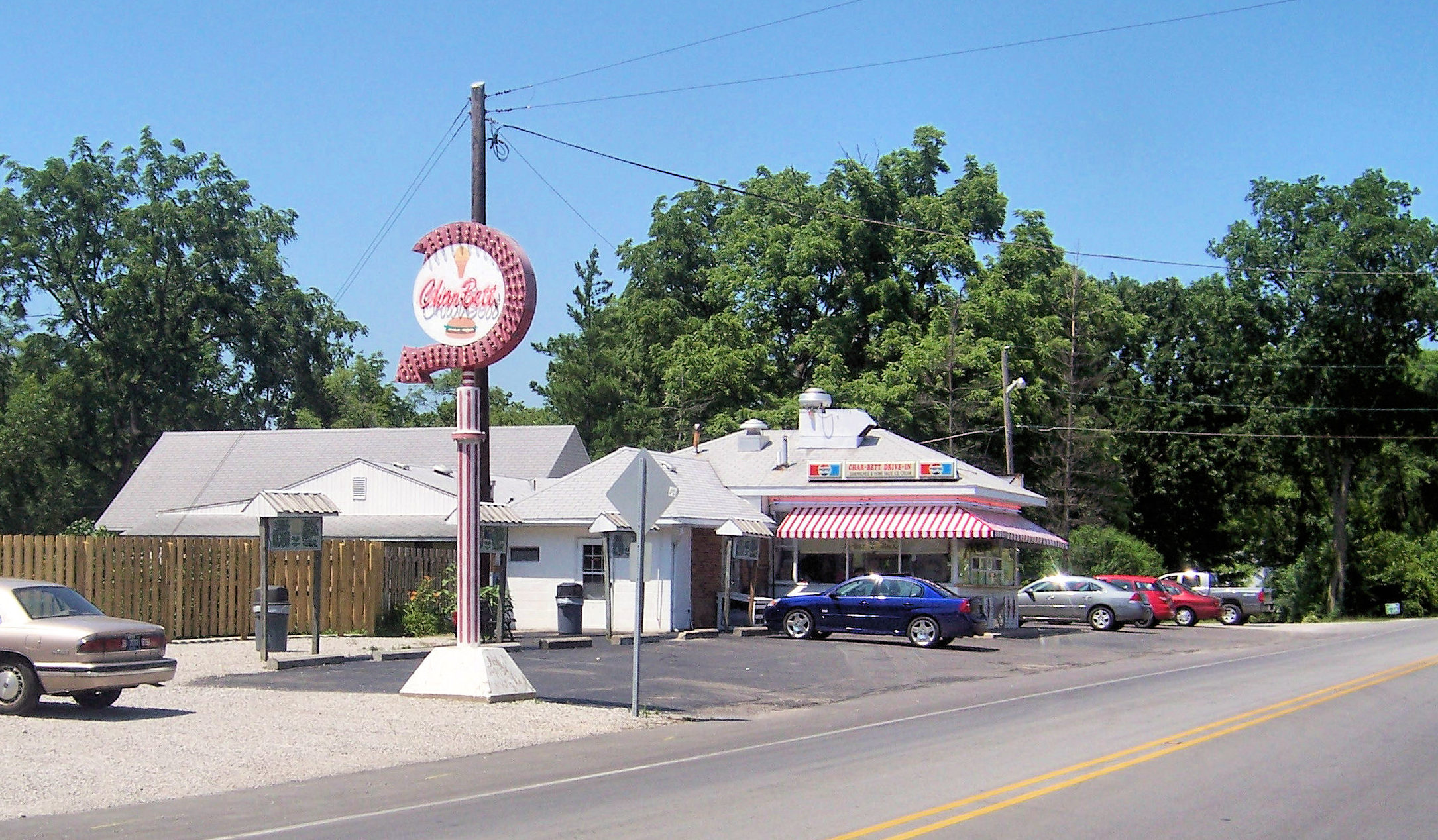 In Logansport, the Char-Bett began life as a grocery store and filling station on the historic Michigan Road in 1951, named for its original owners, Charlie and Betty Streu. When the business outgrew the building in 1958, the Streus offered curbside service. Today, customers walk up to order pork tenderloin sandwiches and thick chocolate malts, with the option of dining in the car with a window tray or at picnic tables.

The 1960s marked the beginning of the end of the drive-in’s reign, supplanted by the even more quick and convenient chain fast-food restaurants with drive-thru windows. You can find survivors, however, usually beloved local institutions. Highland, in the northwest corner of the state, boasts one of Indiana’s best examples of Googie architecture in Johnsen’s Blue Top Drive-In. 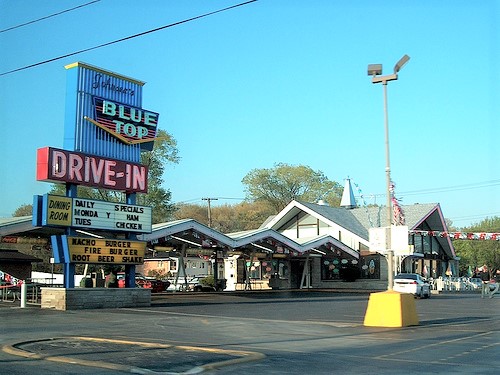 The Googie style name derives from an eponymous chain of California coffee shops that feature glass walls, bold signage, inverted triangles, and gravity-defying angles. Named for the blue-shingled roof on its original location, the Blue Top dates to 1936. Its present structure, built in 1964 with inverted rooflines, draws motorists with a 28-foot tall neon sign and roof canopy shaped like a folded plate. Car culture recognizes the Blue Top as one of its own: regular cruise-in nights draw hundreds of vintage cars.