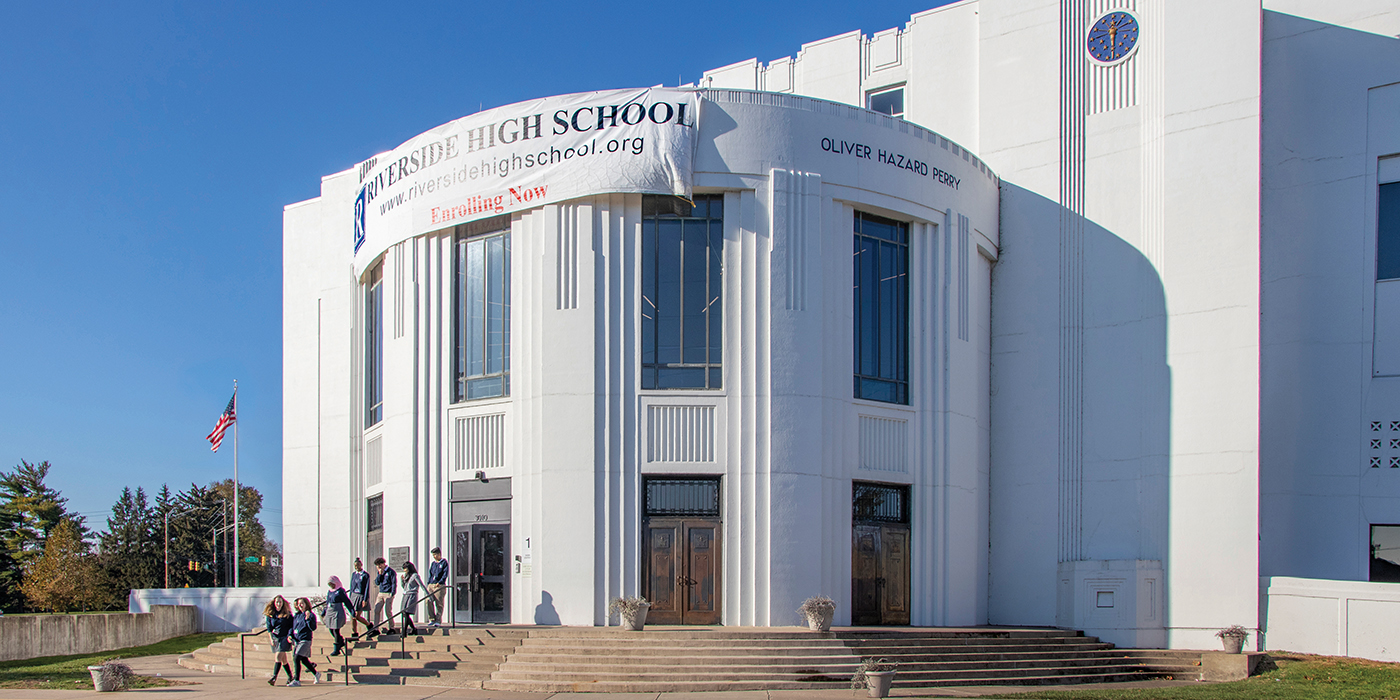 In the midst of the Great Depression, crews from the Works Progress Administration constructed a gleaming white naval armory on Indianapolis’s White River, where U.S. Navy and Marine recruits trained for decades. Two years ago, the armory embarked on a different educational mission as Riverside High School. At our Rescue Party on April 25, Indiana Landmarks will honor Indianapolis Classical Schools’ remarkable adaptation of the 1938 armory with the 2020 Cook Cup for Outstanding Restoration.

Commandeered by the Navy to train radio operators and yeomen during World War II, the armory’s tucked-away location on a non-navigable river in the middle of the country gives credence to stories that it also served as a location for top-secret planning for important battles. The building functioned as a Navy and Marine Corps Reserve Center until it was decommissioned in 2015.

State officials offered the armory to other state agencies, but with no takers the state transferred ownership of the building to the City of Indianapolis, which similarly saw no use for the white behemoth. Around the same time, Indianapolis Classical Schools had its eye on the building as the perfect site for a second high school. With a long wait list for admission, the institution looked to replicate the success it already had in Herron High School, a charter school offering a classical, liberal arts education, located in the city’s historic first Indianapolis Museum of Art.

To give Indianapolis Classical Schools time to raise money for the armory’s adaptation, Indiana Landmarks petitioned the city to give us the building.

Though the armory was structurally sound, water infiltration had damaged concrete and corroded rebar. The lower level near White River was prone to flooding, and antiquated mechanical, plumbing, and electrical systems all needed updating. Dropped ceilings, worn carpet, and chopped-up interior spaces remained from a 1970s renovation. 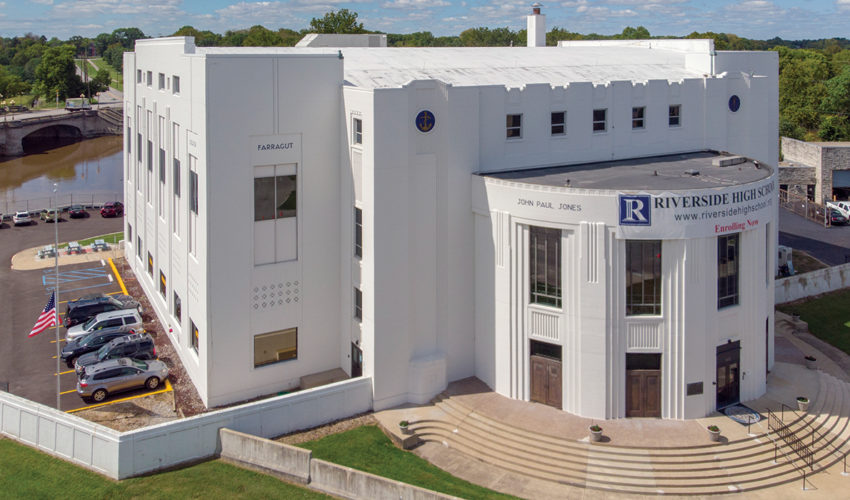 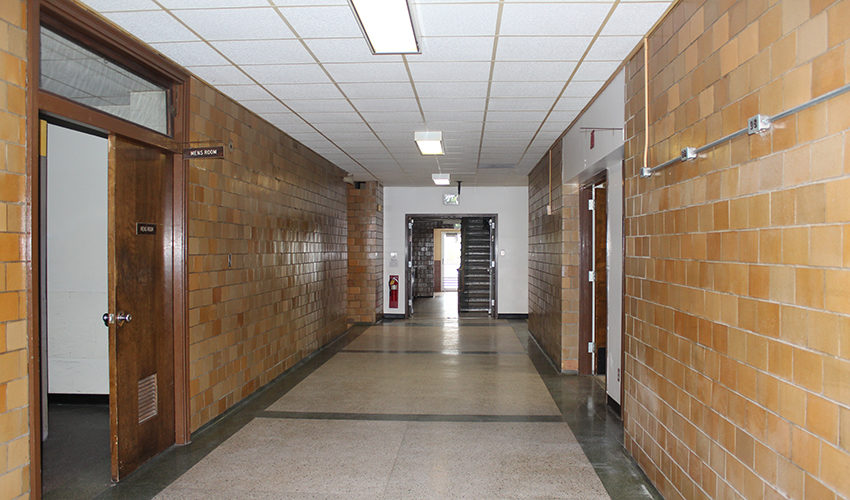 Workers removed dropped ceilings to showcase the original tall ceilings and tore out carpet to expose original terrazzo floors underneath. 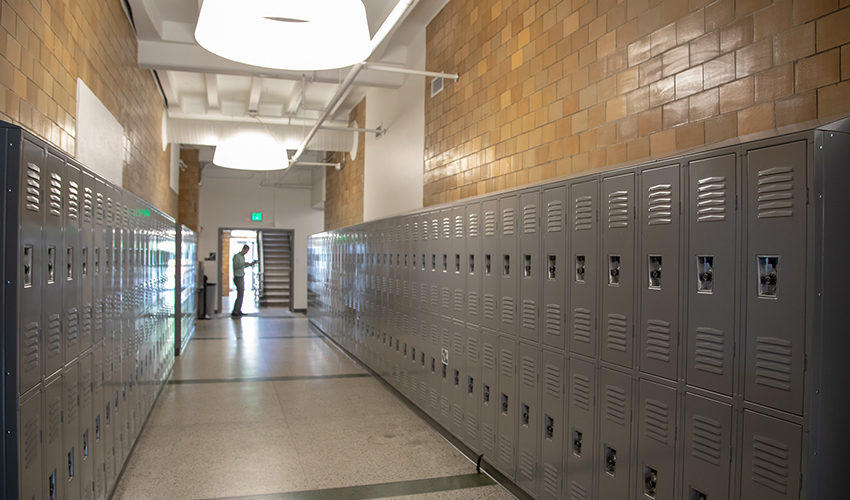 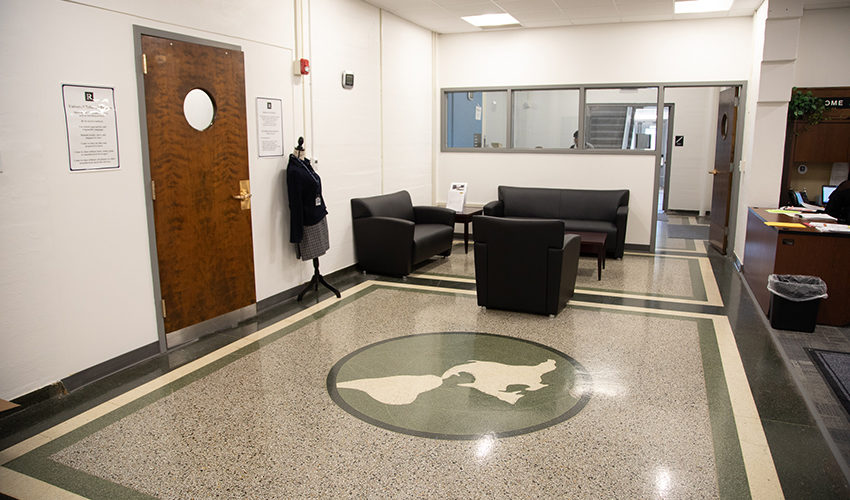 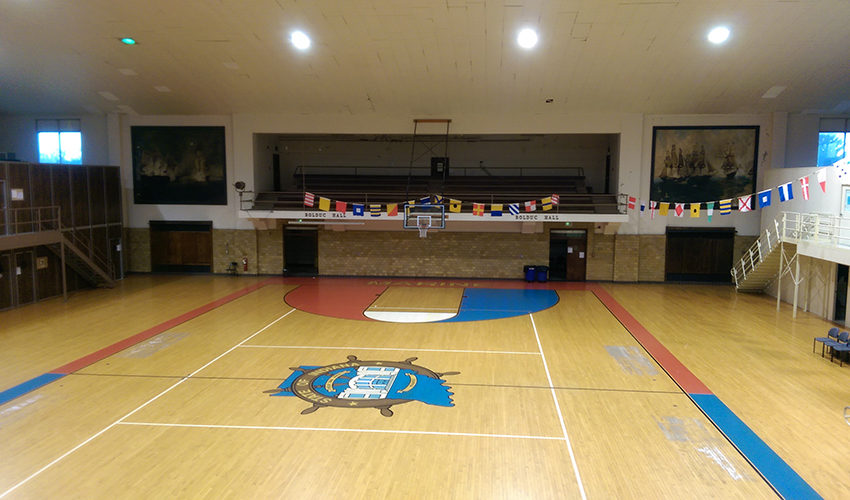 The drill hall prior to restoration. (Photo courtesy RATIO) 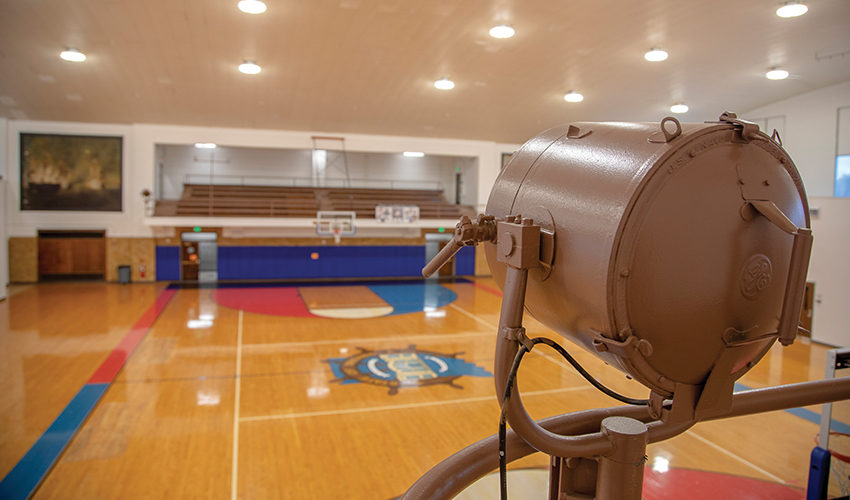 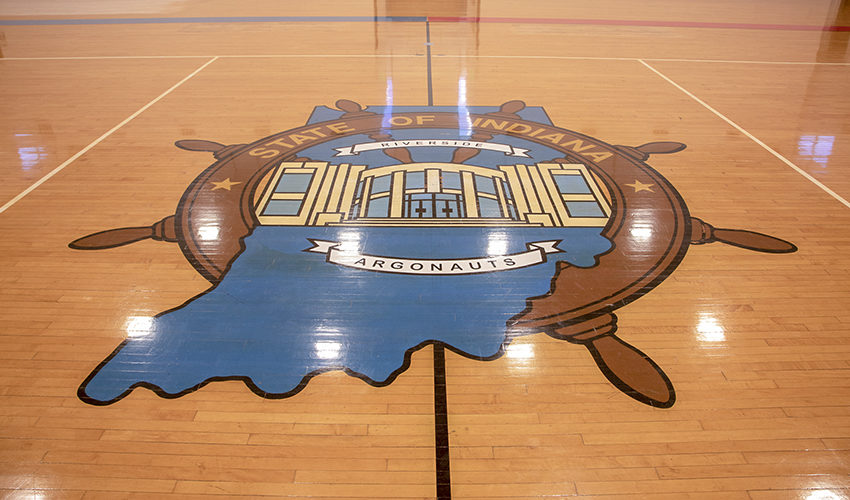 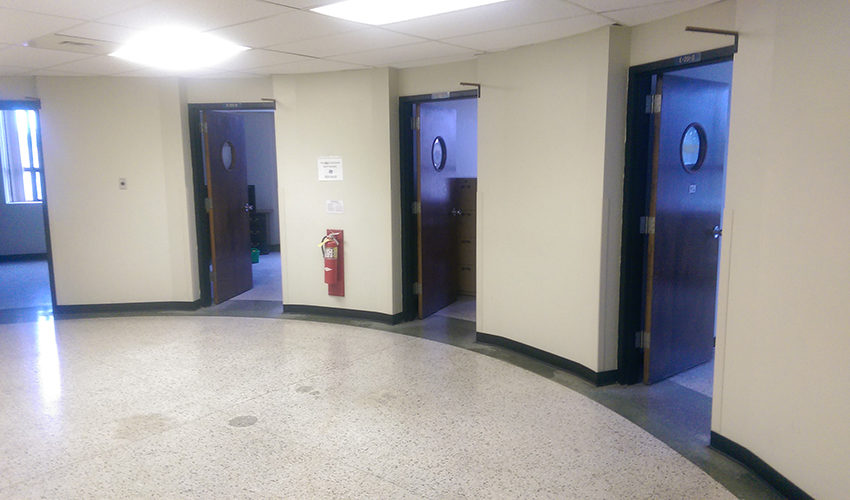 Above the entrance rotunda, workers reopened the library to its double-height dimensions, creating a spacious music room. (Photo: Courtesy RATIO) 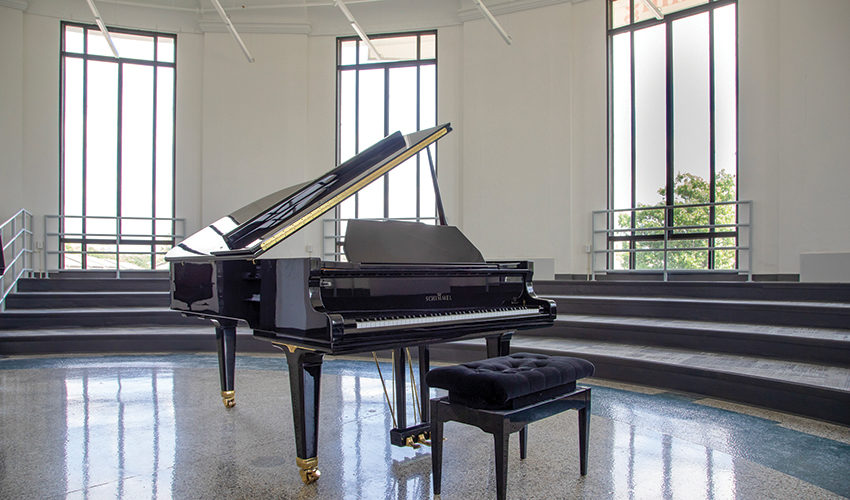 Above the entrance rotunda, workers reopened the library to its double-height dimensions, creating a spacious music room. (Photo: Evan Hale) 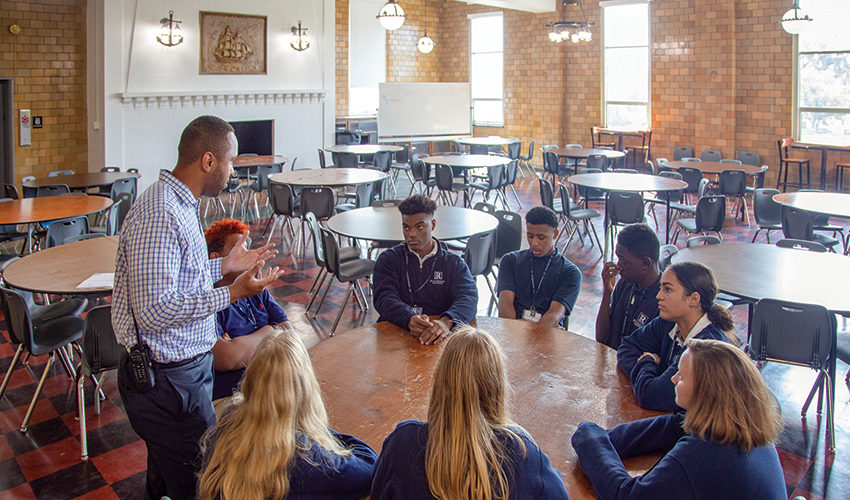 The former mess hall became the school cafeteria. Anchor sconces, ship’s wheel chandeliers, and rare globes etched with a map of the world—rewired during the restoration—still illuminate the space. (Photo: Brian Paul) 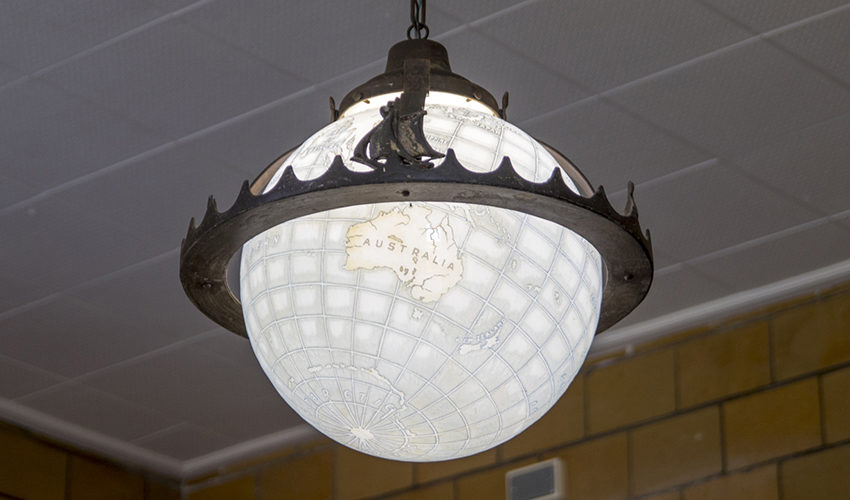 Rare globes etched with a map of the world—rewired during the restoration—still illuminate the cafeteria. (Photo: Evan Hale) 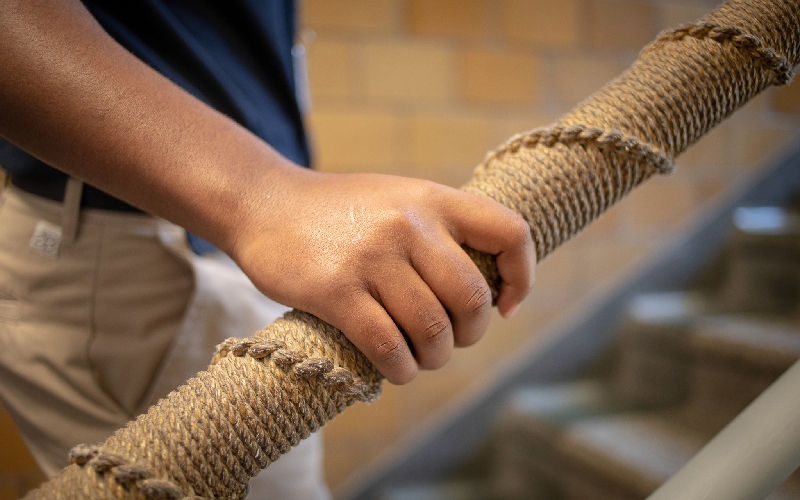 Rope wraps the stair rails at Riverside High School, a lingering reminder of the building's history as a naval armory. (Photo: Brian Paul)
Previous Next

Indianapolis Classical Schools hired RATIO architects and Brandt Construction to ensure the building’s original architectural features and nautical charm were restored and preserved as the armory was adapted. Much of the building’s layout easily lent itself to new use—the drill hall serves as a gymnasium, the mess hall became a cafeteria, and classrooms and offices still serve their original purposes. Workers removed dropped ceilings to showcase the original tall ceilings and tore out carpet to expose original terrazzo floors underneath. In the second-floor library above the entrance rotunda, workers removed interior walls and dropped ceilings to reveal the semi-circular, double-height space, exposing excellent acoustics that made it a perfect music room.

Since opening in 2018, Riverside has re-established the building’s role as a community anchor, honoring its history by hosting reunions for military groups and an annual Pearl Harbor Remembrance event. Basketball teams from nearby Marian University and a local league practice in the gym, and students take P.E. classes across the street in Riverside park. The school hosts community tours, neighborhood coffees, and small meetings and seminars.

As the neighborhood’s first community high school in decades, Riverside draws students from dozens of area middle schools. Next year, Riverside will enroll its fourth freshman class, bringing the student body to around 600.

“Students are coming to us that have not had a college-prep experience and we are really asking them to work harder than they ever have before, to appreciate and strive for something that might not have been within their aspirations up to this point,” says Katie Dorsey, head of school. “When we can do that in a space that also inspires and has a really powerful story to tell, it makes it that much easier for me.”

“Riverside is doing everything we hoped for, becoming a top-rated high school in an area where there weren’t those opportunities for kids before,” says John Watson, Indianapolis Classical Schools board president. “For us, it’s mission accomplished regarding the building, and now we are doing the work of educating everyday.”