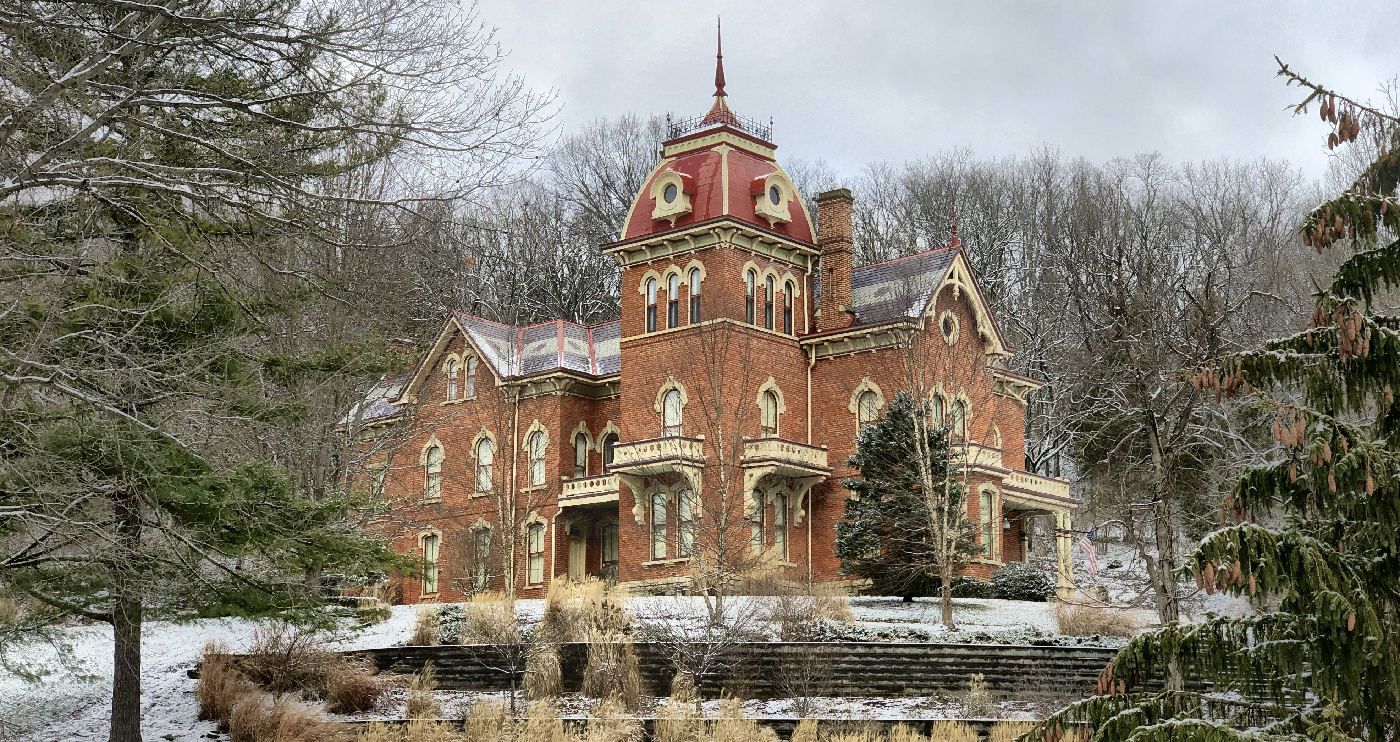 The 1874 Schenck Mansion currently serves as a bed and breakfast, but new owners could use the house as a private home.
POSTED ON March 25, 2020 BY Indiana Landmarks | News

In the nineteenth century, the Schenck family wielded considerable influence in Vevay as prosperous merchants who helped build the Ohio River community and establish it as an early commercial hub. Today, two Schenck family properties are on the market, an extraordinary opportunity for new owners to become part of their storied history.

Ulysses P. Schenck migrated from Switzerland with his family in 1817, eventually settling in southern Indiana with a number of other Swiss families. Early on, Schenck established himself as a successful businessman, opening a large mercantile that sold everything from patent medicines to furniture. He also invested in steamboats and transported goods along the Ohio River, earning the nickname “Hay King” for the vast quantities of hay he shipped from the region. 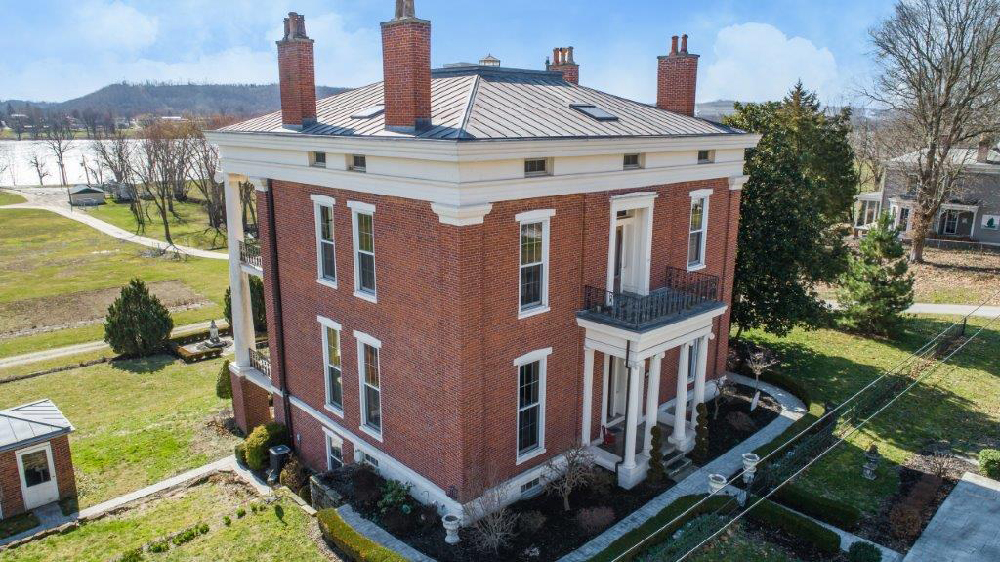 In 1844, Schenck built a fine Greek Revival home overlooking the Ohio River near downtown Vevay. The 7,000 square-foot house features a three-story pillared porch overlooking the river and a spiral staircase winding from the first floor to the attic designed by Francis Costigan, an Indiana architect known for his Greek Revival designs, including the state-owned Lanier Mansion in Madison. 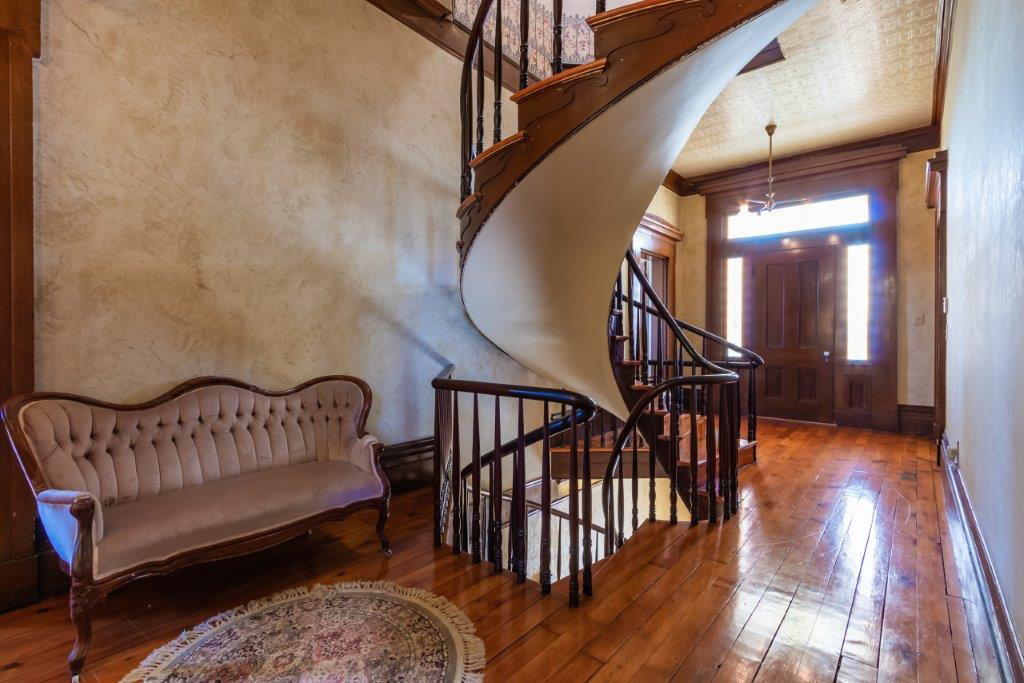 Outside of town, another Schenck home is on the market. Built in 1874 for Ulysses’ son Benjamin Franklin Schenck, the house is a showstopper with intriguing history.

Born in 1834, Benjamin joined his father’s flourishing business after graduating from law school. In the 1850s, he struck out on his own, buying and editing the Vevay Weekly News. He hired Cincinnati architect George P. Humphries to design his impressive house on a hill northwest of town. Perched on a rise against a backdrop of rolling hills, the Schenck Mansion looks like something out of a fairy tale. The 12,000-square-foot, Second Empire-style home — the county’s only example of the style – is an architectural confection, with dormer windows, porches, balconies, and a four-story tower. 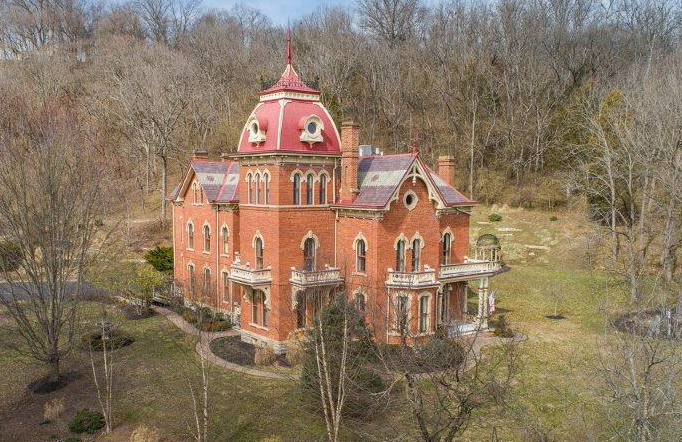 Schenck only spent two summers in his new home before dying in 1877 with the house still unfinished. His family completed construction and in 1923 sold the mansion to the Indiana Baptist Convention, which used the property for conferences and events.

In 1945, new owners divided the upper floor into rental apartments and installed a quarter-mile horse track down the hill in front of the house. Subsequent property transfers spelled further decline for the once-grand property, including purchase of the racetrack area for use as a mobile home park.

Over the next several decades, the Schenck Mansion’s fortunes continued to rise and fall, culminating with prolonged vacancy in the 1990s. It wasn’t until 1998 – when owners Jerry and Lisa Fisher bought to property – that the mansion finally won redemption. The Fishers restored the house, removed the mobile home park, landscaped the surrounding property, and opened the mansion as a bed and breakfast. 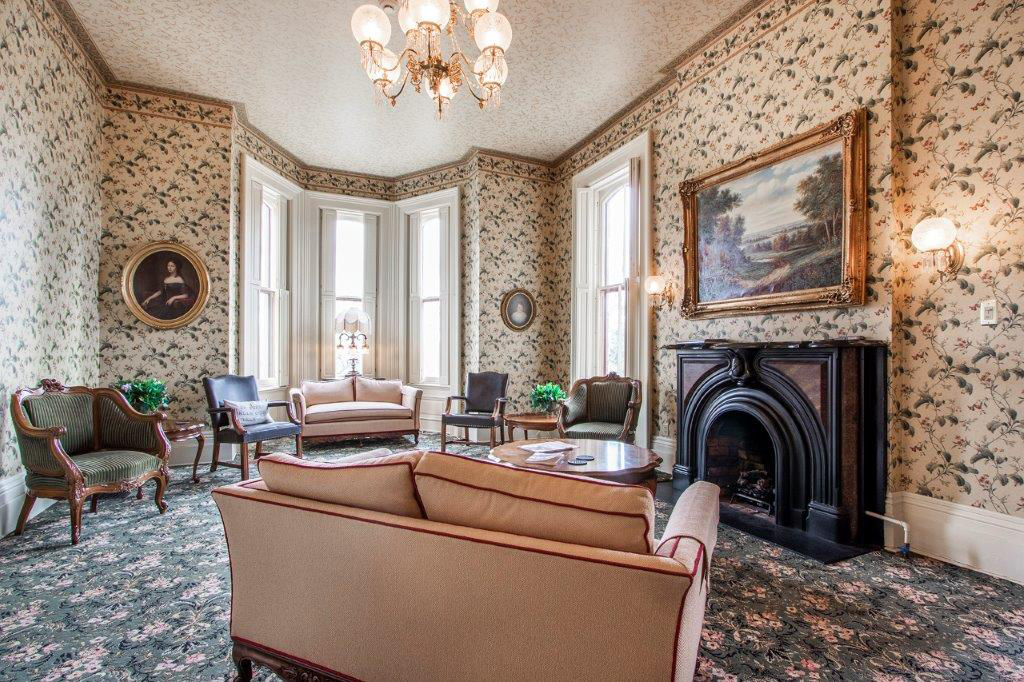 Today, the National Register-listed Schenck Mansion offers five guest rooms and an innkeeper’s apartment, but it could easily be returned to use as a private residence. The mansion also comes fully furnished with antiques, high end reproductions, dishes, silverware, and several artifacts from the Schenck family.

For more information on either property, contact agent, Stacey Craig.