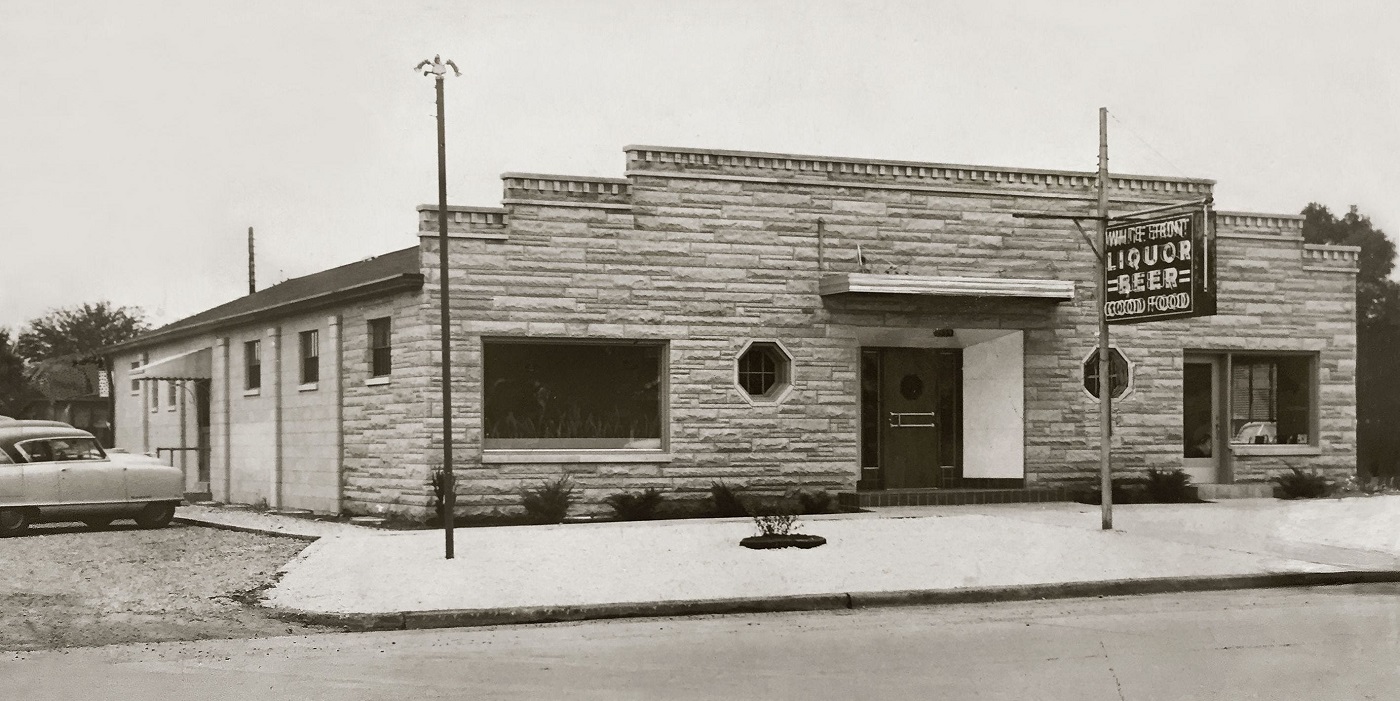 Picture yourself in early 1960s Indianapolis on a spring Thursday evening. Indy 500 fever is rising around town as the race approaches — especially at 3535 West 16th Street, home of Mates’ White Front Tavern. At Mates’, “the friendliest place in town,” Thursday night is movie night.

You settle into one of the last unoccupied chairs. Each week’s short film varies, but all feature motorsports — Indy highlights, Formula One from Monaco or Monza, stock cars from Darlington or Daytona. Tonight’s showing is Midwest sprint-car action. Screen and projector are set. Mechanics, crewmembers, builders, and drivers all gather to watch. The footage rolls, and some of those very characters banging wheels on screen are in the room with you cheering, booing, guffawing, and razzing one another. Where could you find such a scene today? 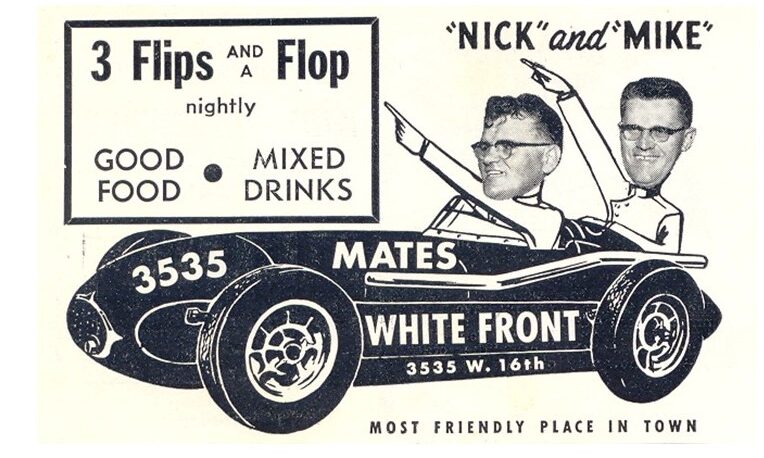 Back in the ’50s and ’60s at Mates’ White Front, patrons could immerse themselves in this true-grit ambience most any Thursday. (Arrive by six for movie time. Stay for live music by house jazz band, 3 Flips and a Flop, at nine.)

Within a stone’s throw of the Indianapolis Motor Speedway, Mates’ was the place to be throughout the era — Thursdays in May or any day. Year-round diners could pop in for a cold one and a cheeseburger, feast on a filet for less than a tenth of what St. Elmo’s now charges, and find themselves rubbing elbows with local 500 regulars like Bob Sweikert, Bobby Grim, Ronnie Duman, or Jim “Herk” Hurtubise, or spot a visiting Bill Vukovich, Jimmy Bryan, Roger McCluskey, “Ole Rube” Lloyd Ruby, or one of the Unsers.

According to Speedway historian Donald Davidson, there were not one but two Mates’ White Fronts. Nick’s grandparents George and Violet Mates founded the original White Front Tavern in 1935, soon after repeal of Prohibition. Located just east of the Speedway’s turn two at 3729 West 16th Street, the white-painted house gave inspiration for the tavern’s name. By 1952, road configurations needed for a railway underpass put the location at a disadvantage and George and Violet decided to reopen in a newly built structure a few doors east. They retained the White Front name, though the new Mates’ White Front would ironically never be painted white. 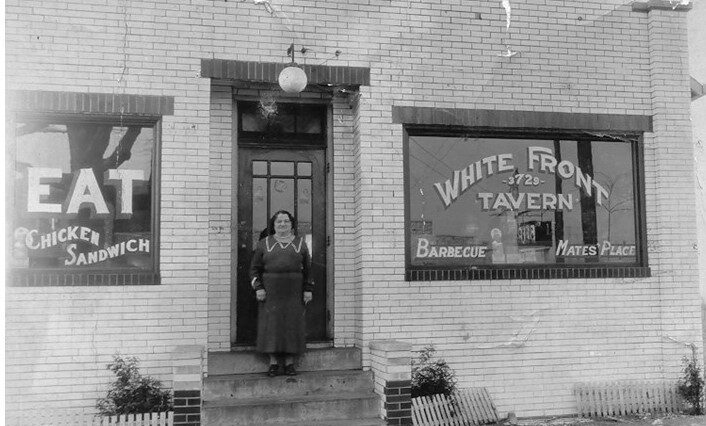 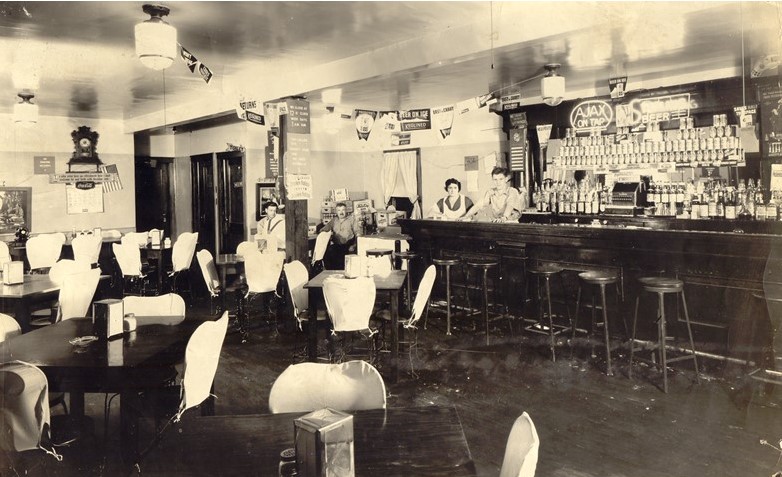 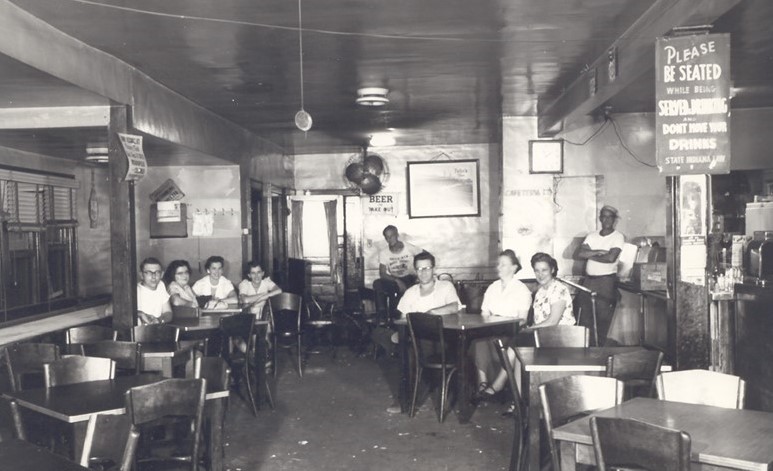 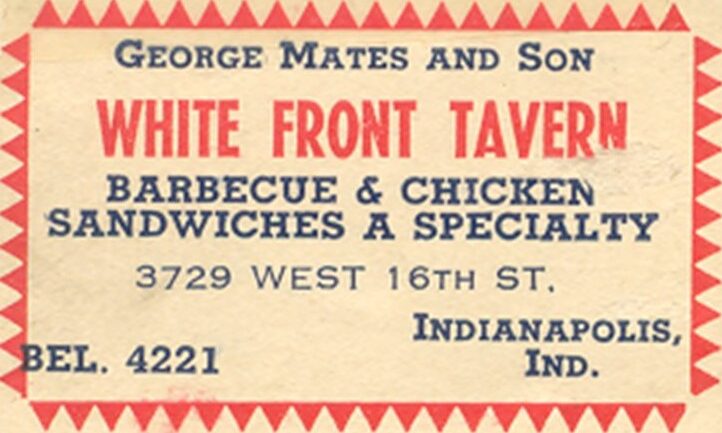 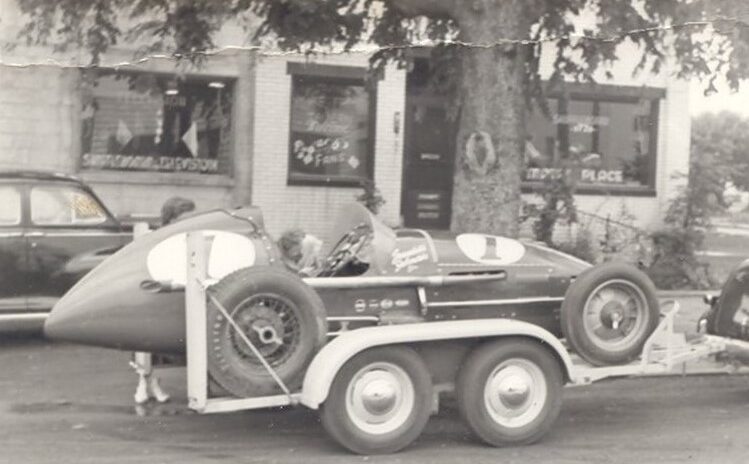 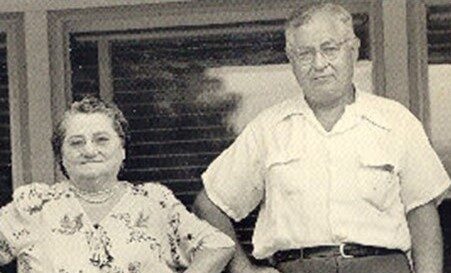 The stories of Mates’ White Front in its ’50s and ’60s heyday live on vividly through the memories and photos collected by Nick Mates, whose father and uncle, Nick and Mike Mates, inherited the business from parents George and Violet. Legendary accounts include the family friendship with Speedway owners Tony and Mary Hulman, sightings of celebrities Clark Gable and Groucho Marx, and a rookie A.J. Foyt in 1958 enduring a hard night after too many rounds of “orange juice” surreptitiously enhanced with vodka. Bobby Unser made regular appearances with track-blistered hands kindly bandaged by Audrey the bartender, and six-time 500-winning builder A.J. Watson was reportedly not so adept at balancing beer bottles on his flat-top haircut. Nick Mates, Sr., proved a successful marketer in keeping drivers (and their fans) coming back to Mates’. In one marketing ploy, drivers would receive a free lunch with proof they’d worn their Mates’ White Front t-shirts to the track. 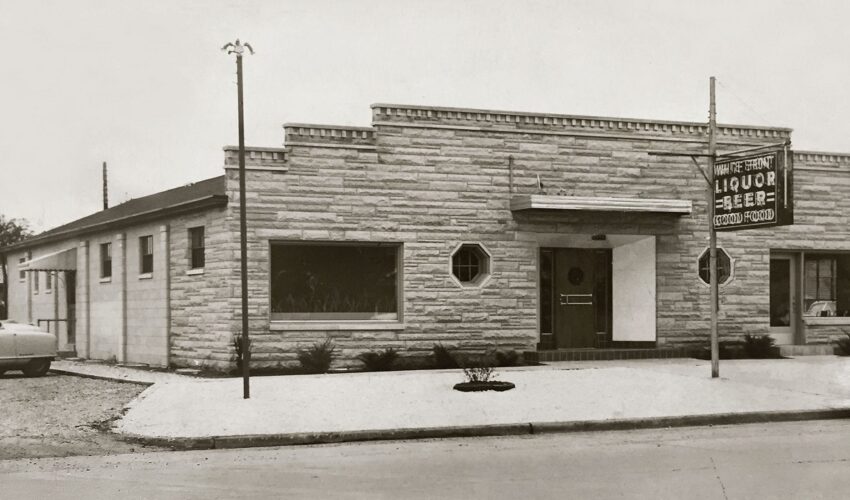 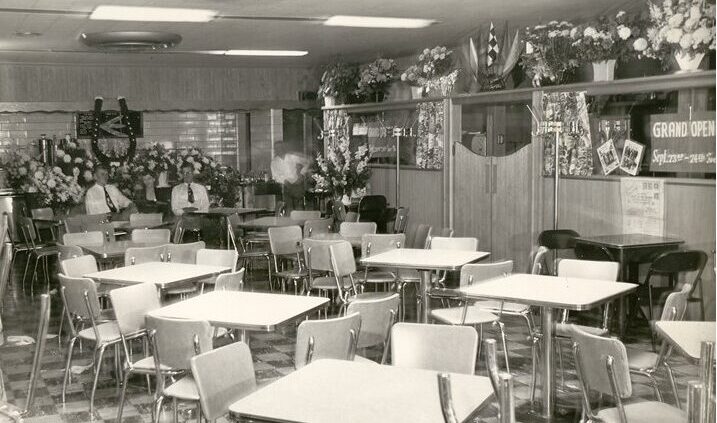 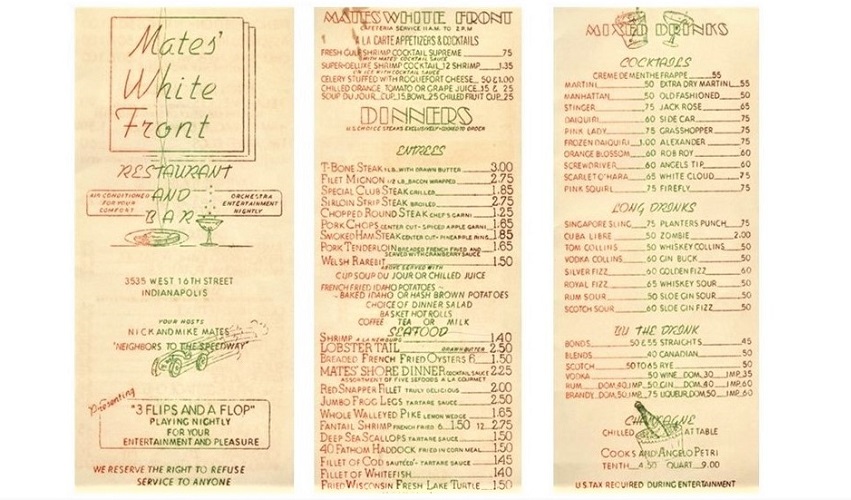 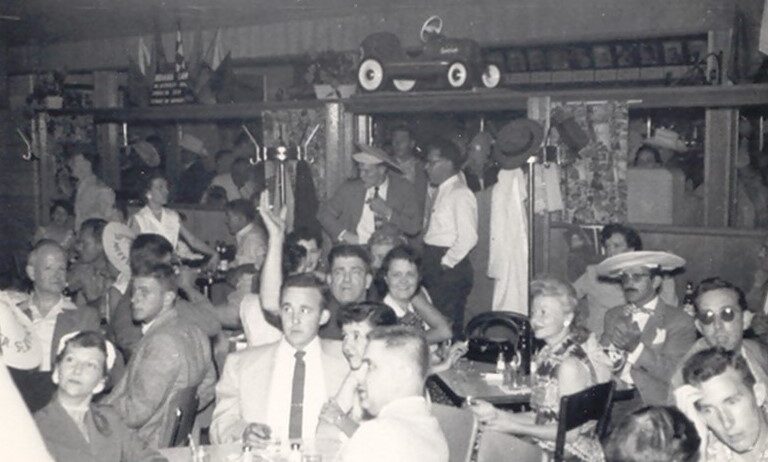 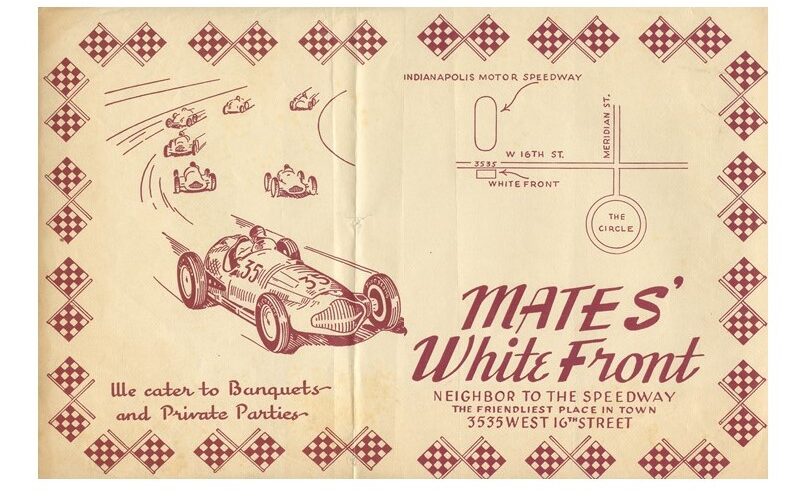 Business flourished until the late ’60s when hotels and restaurants began catering to racers’ increasingly upscale demands. Sold in the mid-70s, the Mates’ building became a biker bar, then a strip joint. Today, driving east on 16th toward the Speedway, the building (recently sold to new owners) is visible on the south side a few blocks before the underpass, branded Club Venus. The exterior is unaltered but for the prominent signage and opaque windows and entrances. Indoors, only the men’s room retains the simple ceramic and cinderblock look of old times.

The old haunt’s glory days may be long gone, but if motorsports fans hope to sustain the camaraderie of racing’s roots, keeping alive memories from Mates’ will fuel the cause.

Fans looking for more Mates’ history and photos can find both here and here. 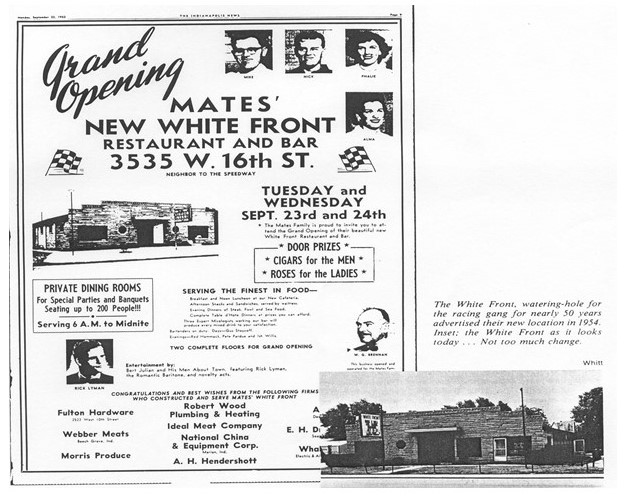