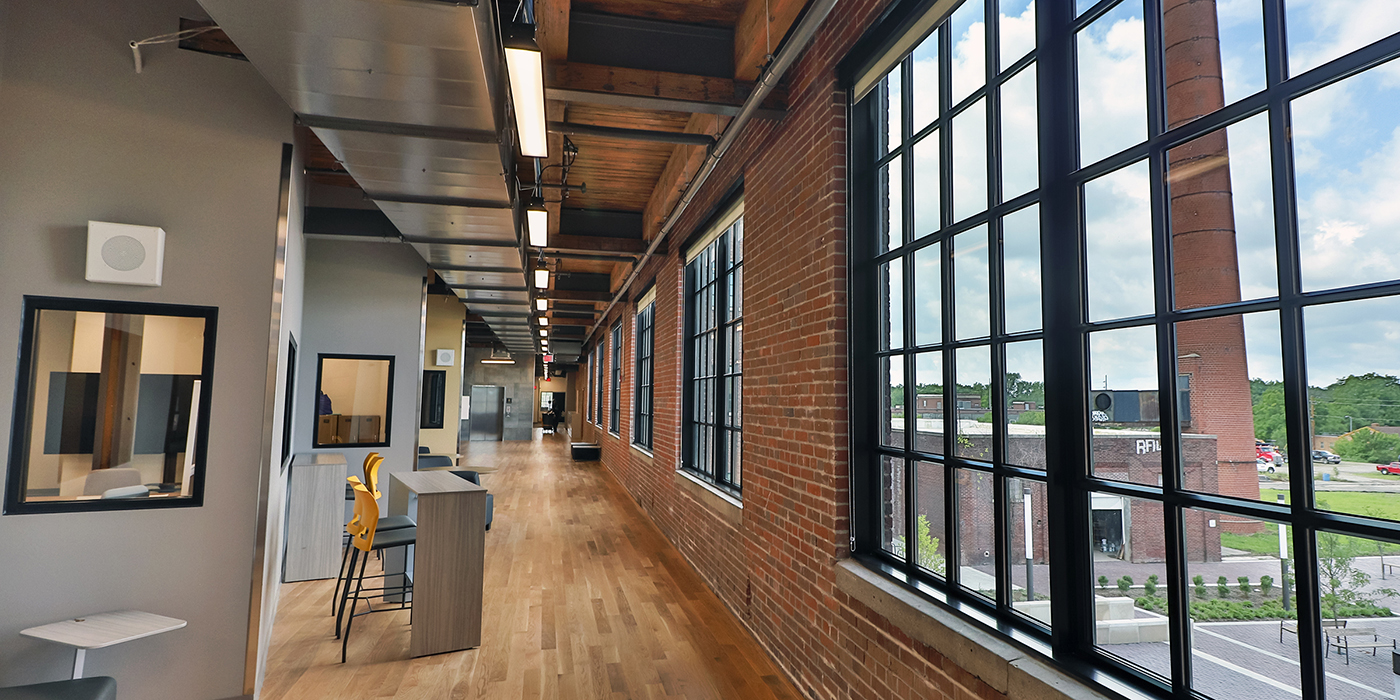 For generations of residents on Indianapolis’s near eastside, the P.R. Mallory and Company complex served as a community anchor and one of its biggest employers. Following the company’s departure in 1979, the factory site increasingly became a symbol of despair.

Decades later, neighborhood leaders saw potential for the site to become a catalyst for revitalization in a traditionally underserved neighborhood, championing a plan to rehabilitate the decaying industrial building for use by two twenty-first century educational facilities. “The community impact of this project is enormous,” says Indiana Landmarks President Marsh Davis. “It’s a heroic transformation richly deserving of our 2021 Cook Cup for Outstanding Restoration.”

General Electric built the factory in 1920-21 on the site of the city’s former Washington Park. However, most people associate the complex with P.R. Mallory and Company Inc.—a pioneer in electronics, electro-chemistry, and specialized metallurgy—which operated there from 1929 to 1979. The company held numerous patents for radios, automobiles, refrigerators, and most notably, the Duracell battery.

The complex sat vacant for over 30 years following P.R. Mallory and Company’s departure, its redevelopment stymied by environmental issues that eventually required demolition of a sawtooth manufacturing building and removal of 4,200 tons of dirt underneath to address a large underground flume.

Leaders from the Englewood Community Development Corporation and John Boner Neighborhood Centers believed rehabilitation of the P.R. Mallory site could spur redevelopment along East Washington Street, an area of Indianapolis that had not seen significant reinvestment in decades. They created P.R. Mallory LLC in 2018 and proposed a creative reuse and ambitious restoration plan for the campus: repurposing it to house two public charter schools, Paramount Englewood School of Excellence and Purdue Polytechnic High School.

“When we started the school, we wanted to be someplace where we could be part of a community,” says Scott Bess, head of schools for Purdue Polytechnic High Schools. “The vision for not just the building but the neighborhood really sold us on it.”

Along with the site’s significant restoration and environmental challenges, the $38 million redevelopment required a complex stack of financing sources that took years to come together, with support from the City of Indianapolis, Consortium Capital, Indiana Economic Development Corporation, LISC, MindTrust, Renew Indianapolis, PNC, JP Morgan Chase, and Indiana Landmarks. The project simultaneously nominated the site to the National Register and secured Federal historic tax credits, which require high restoration standards. 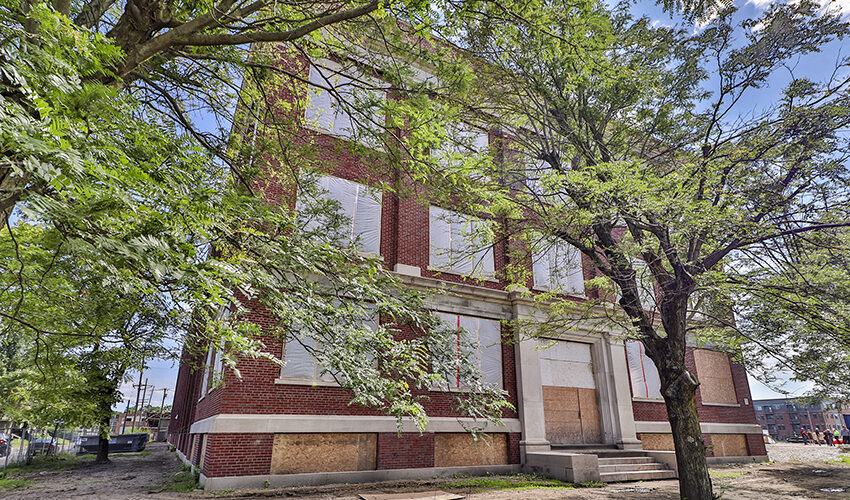 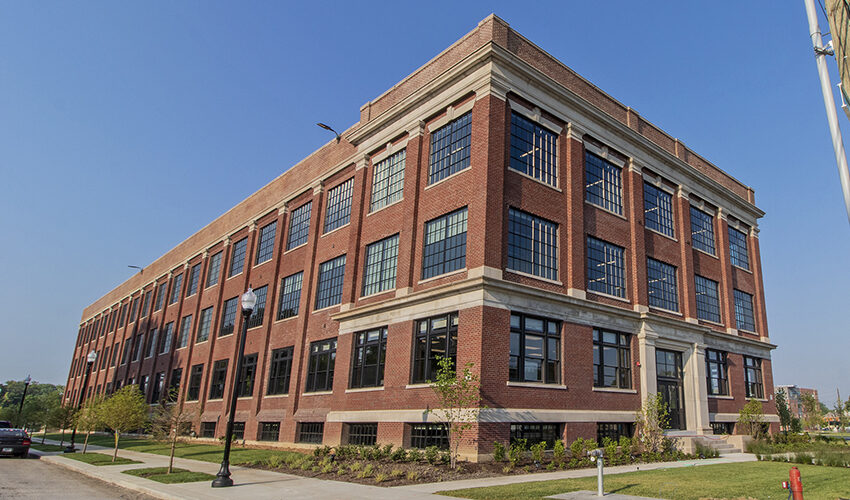 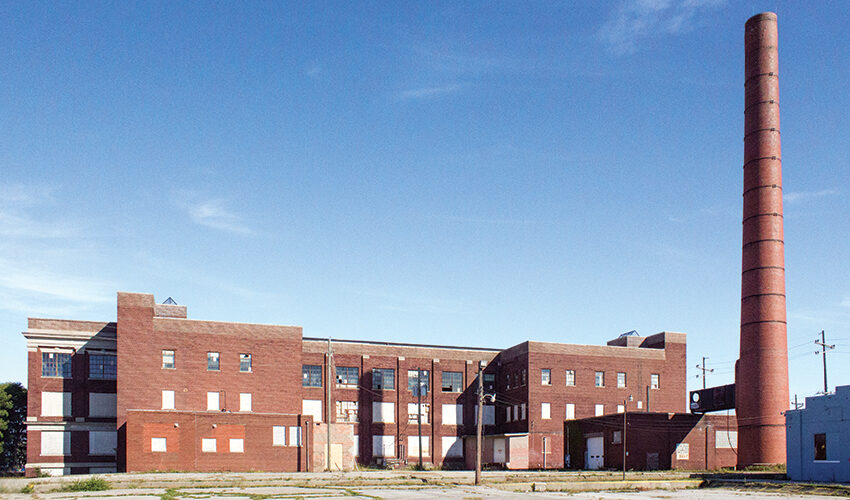 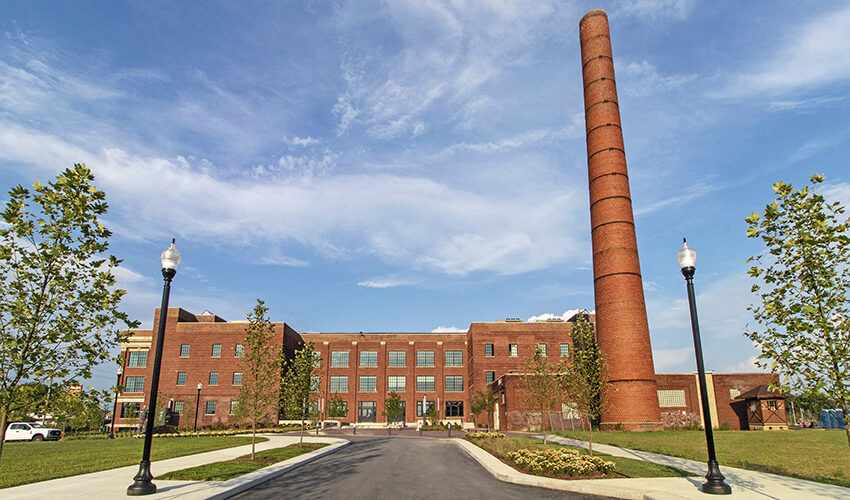 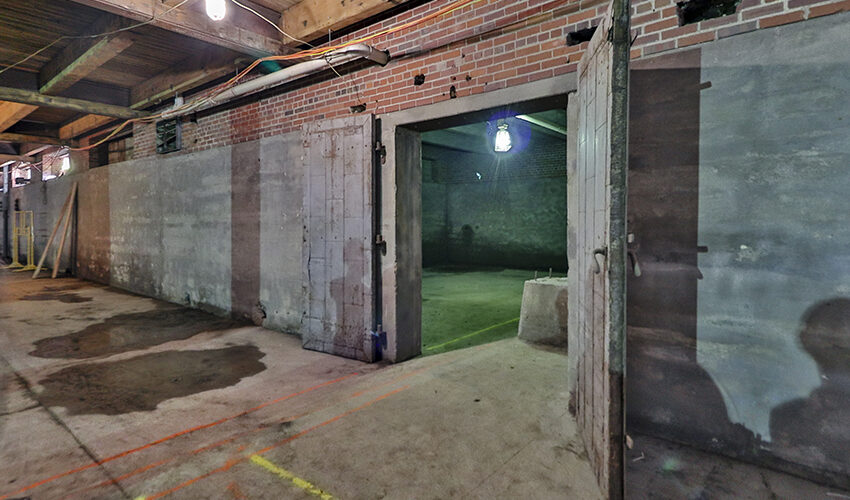 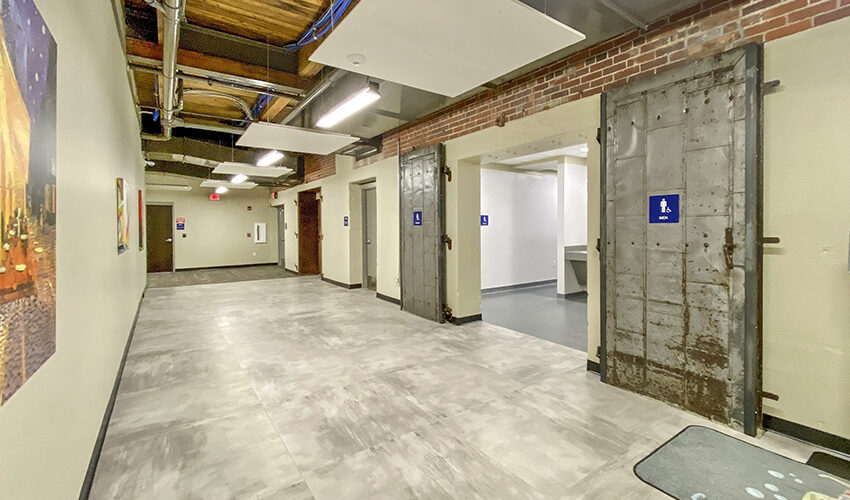 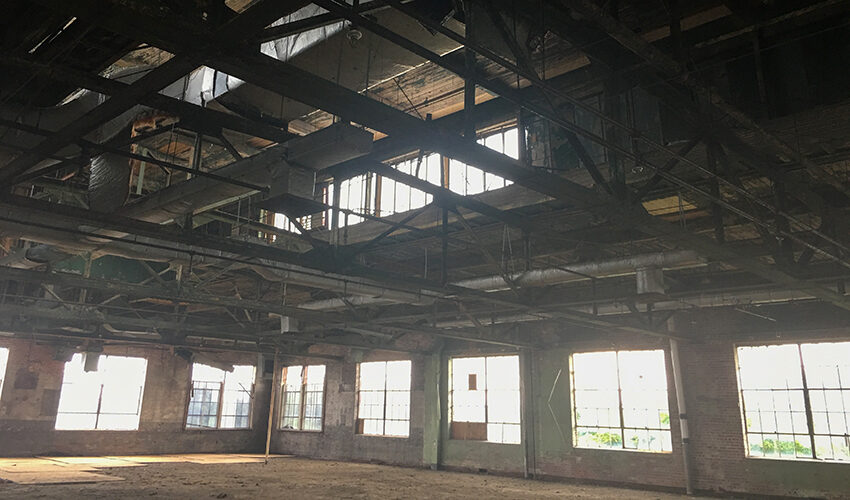 Workers retained many of the factory’s industrial elements, including original brick and beams. (Before photo courtesy Schmidt Associates) 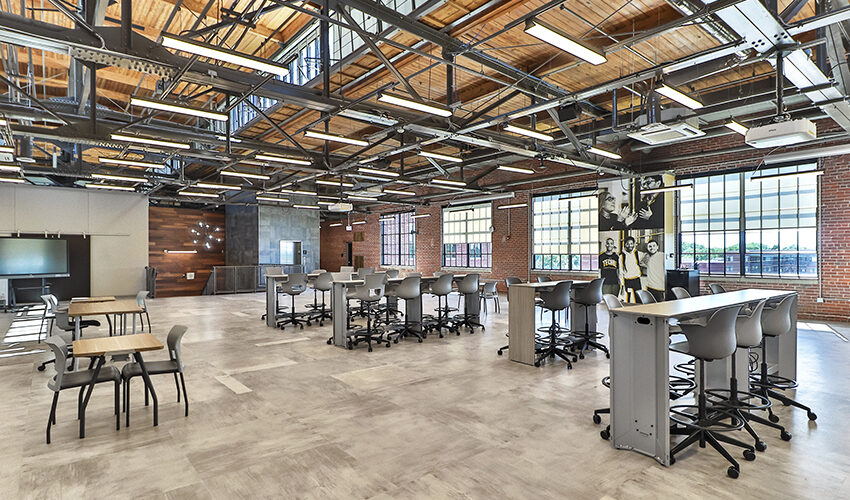 Workers retained many of the factory’s industrial elements, including original brick and beams. (After photo courtesy Schmidt Associates)
Previous Next

In adapting the four-story, 105,000 square-foot Administration Building, restoration architect Schmidt Associates incorporated original features with new elements that served the schools’ particular educational needs. “It was about trying to find that blend of how to make it look modern and engaging and still preserve the historic character of the building,” says Lisa Gomperts, project manager and principal of Schmidt Associates.

Though years of water damage had destroyed most of the original wood flooring, salvaged pieces now serve as a backdrop for historic photos in a common area. A 1944 bunker building found new use as the home of Uplift Produce—a hydroponic growing operation—and Purdue Robotics. A smokestack and a guard shack were retained for future use.

Purdue Polytechnic offers students in the community the opportunity to attend free of charge, and, if they meet the minimum admission requirements of Purdue University upon graduation, earn direct admission into Purdue Polytechnic Institute, one of the university’s 10 academic colleges. Students work with numerous STEM-focused industry partners that serve as mentors and guides.

A Mayor-sponsored public charter school and second middle school program for Paramount’s award-winning flagship campus, Paramount Englewood’s curriculum is based on an exploratory learning program, with an emphasis on rigorous academics and on-campus experimental learning activities.

The adaptively reused building, with its many exposed systems, structure, and historic features, is the definitive learning lab for students. The innovation that began at Mallory through its successful development of alkaline batteries continues today as a hub for the next generation of inventors.

“This award recognizes the army of people who played all sorts of important roles at critical points in time,” says James Taylor, John Boner Neighborhood Centers CEO. “This is a tenacious neighborhood that knows how to organize when it needs to organize, and when we get that energy behind something, it’s kind of unstoppable.”