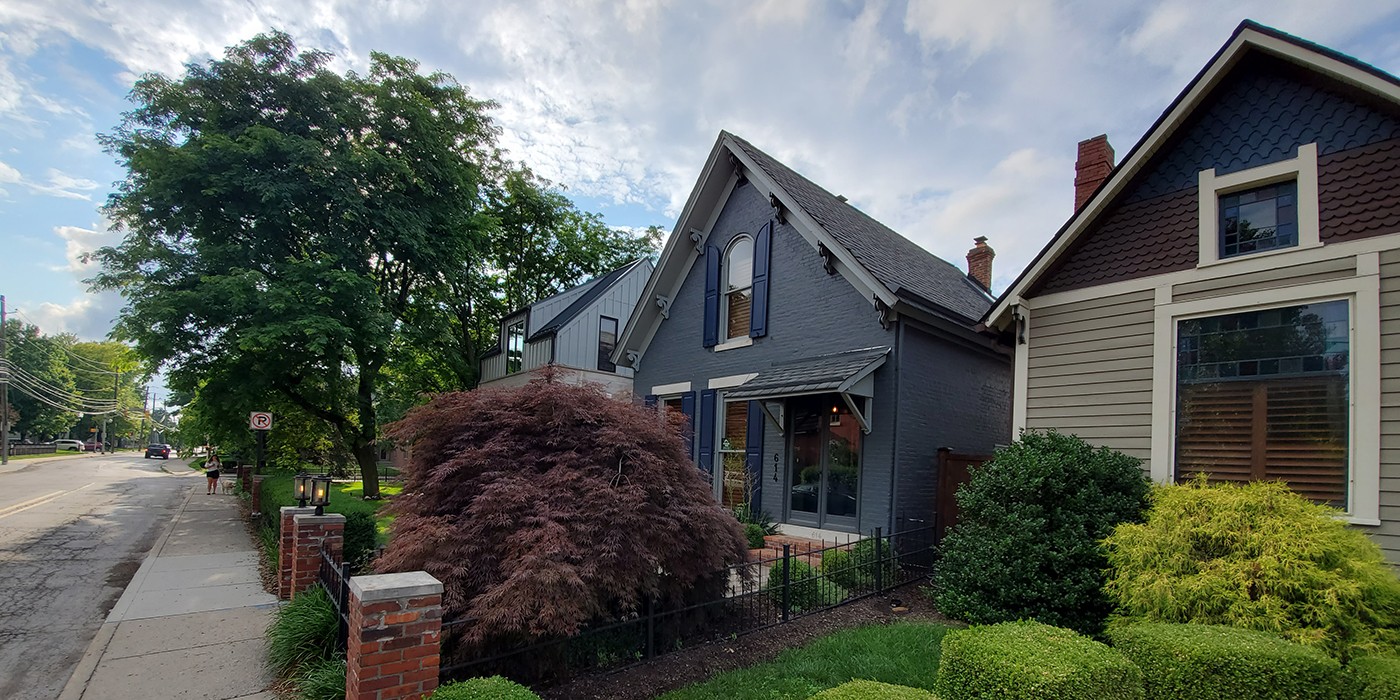 On a walking tour on October 5, tourgoers can hear the story of the historic district’s evolution and how it survived a close call with annihilation. (Photo: Bruce W. Buchanan)
POSTED ON August 24, 2021 BY Indiana Landmarks | Events

As Indianapolis grew beyond its original Mile Square in the mid-nineteenth century, the area northeast of downtown now known as Chatham Arch developed into a thriving neighborhood of modest cottages, grander homes, apartments, duplexes, churches, and commercial buildings. Today, it remains a walkable, vibrant place to live and work, its collection of historic residential and commercial architecture a major selling point.

Hear the story of the historic district’s evolution and how it survived a close call with annihilation on Indiana Landmarks’ neighborhood walking tour on October 5, presented in partnership with the Chatham Arch Neighborhood Association and Foundation and Hendricks Commercial Properties.

Beginning in 1836, John Wood, Sr., platted the area and named it Chatham. The neighborhood grew to include a five-acre railroad depot, churches, and multiple shops and businesses along Massachusetts Avenue, its primary commercial corridor. The historic district takes its name from that early history and from Arch Street, one of the neighborhood’s quaint residential streets.

In the 1960s, interstate construction cut a swath through Chatham Arch, isolating it from other nearby neighborhoods and threatening its survival. Residents, city agencies, and non-profits including Indiana Landmarks united to protect the area and celebrate its heritage, securing its listing in the National Register of Historic Places in 1980 and local historic district designation in 1982. Developers injected new life to the neighborhood’s commercial core, turning places like the Real Silk Hosiery Mills—a prominent silk hosiery factory in the country beginning in the 1920s—into lofts. 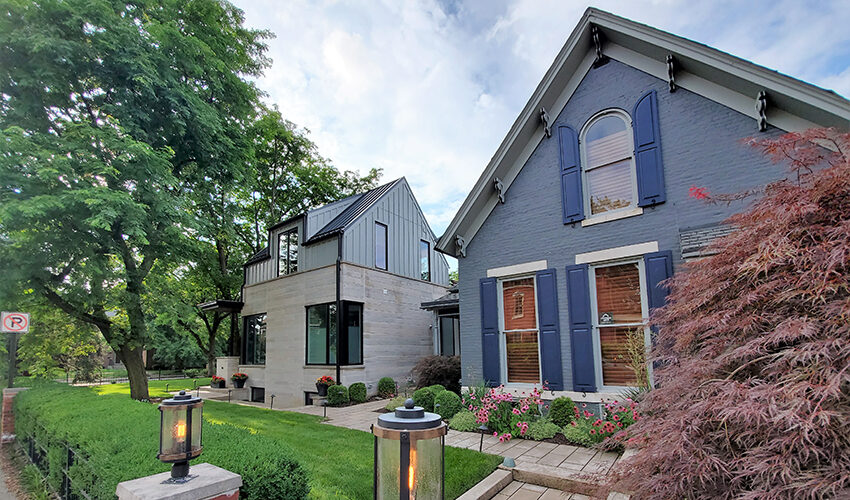 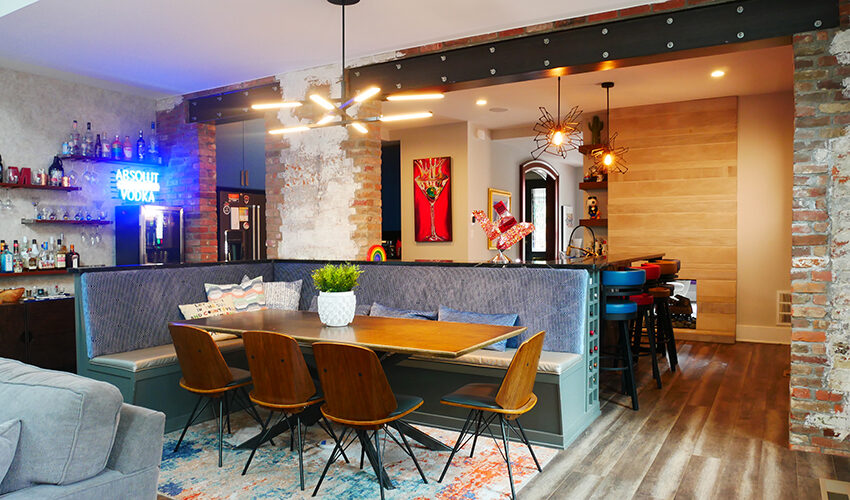 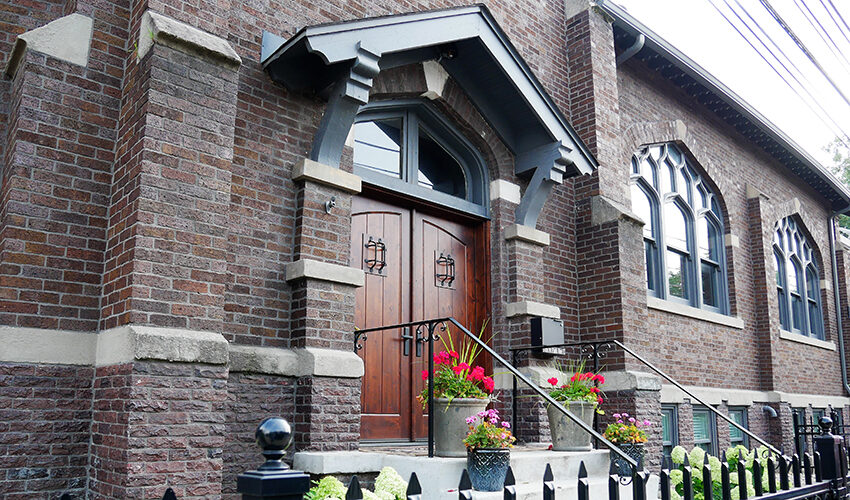 The First United Brethren Church (above) on Park Avenue has been repurposed several times since its construction in 1907, including reuse as Phoenix Theatre. (Photo by Bruce W. Buchanan) 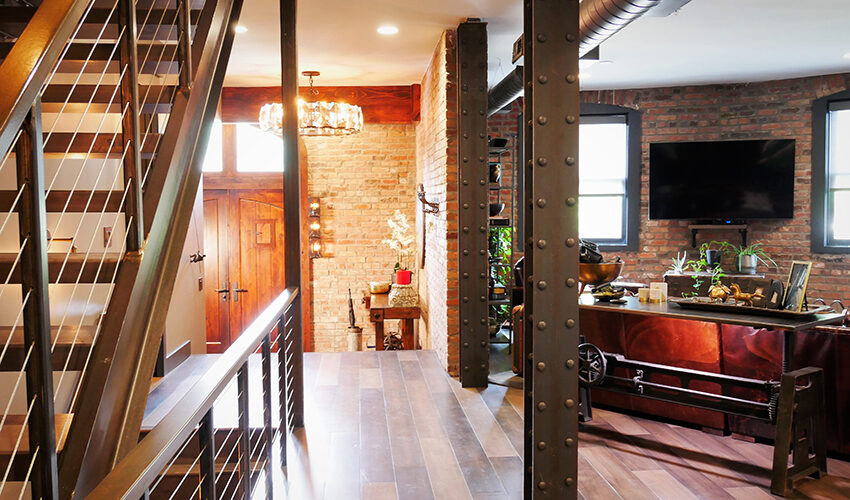 Today, the historic church houses three condos, one of which will be open to tourgoers (above). (Photo by Bruce W. Buchanan)
Previous Next

“Here in Chatham Arch, most of the homes have front porches where neighbors gather to talk. Before you know it, you’re walking to Mass Ave for dinner together,” says Jason Trusty, neighborhood foundation president. “It’s one of the most walkable neighborhoods. We might park our car for a few weeks without driving it. You can walk to just about anything you want: grocery stores, restaurants, bars, and now a movie theater and bowling alley.”

Our October tour focuses on the center of the district, including a look inside the c.1864 Fiscus House on St. Clair Street, owned by Louise Marsh and her partner Ronda Moreland. Drawn by the property’s large yard and the neighborhood’s walkability, the pair bought the home a few years ago and commissioned a contemporary addition, working with the Indianapolis Historic Preservation Commission to ensure the design complemented the historic original, while still looking distinctly modern.

“I love walking through the front door into the old house, with its historic brick, and then that transition from historic to modern,” says Marsh. 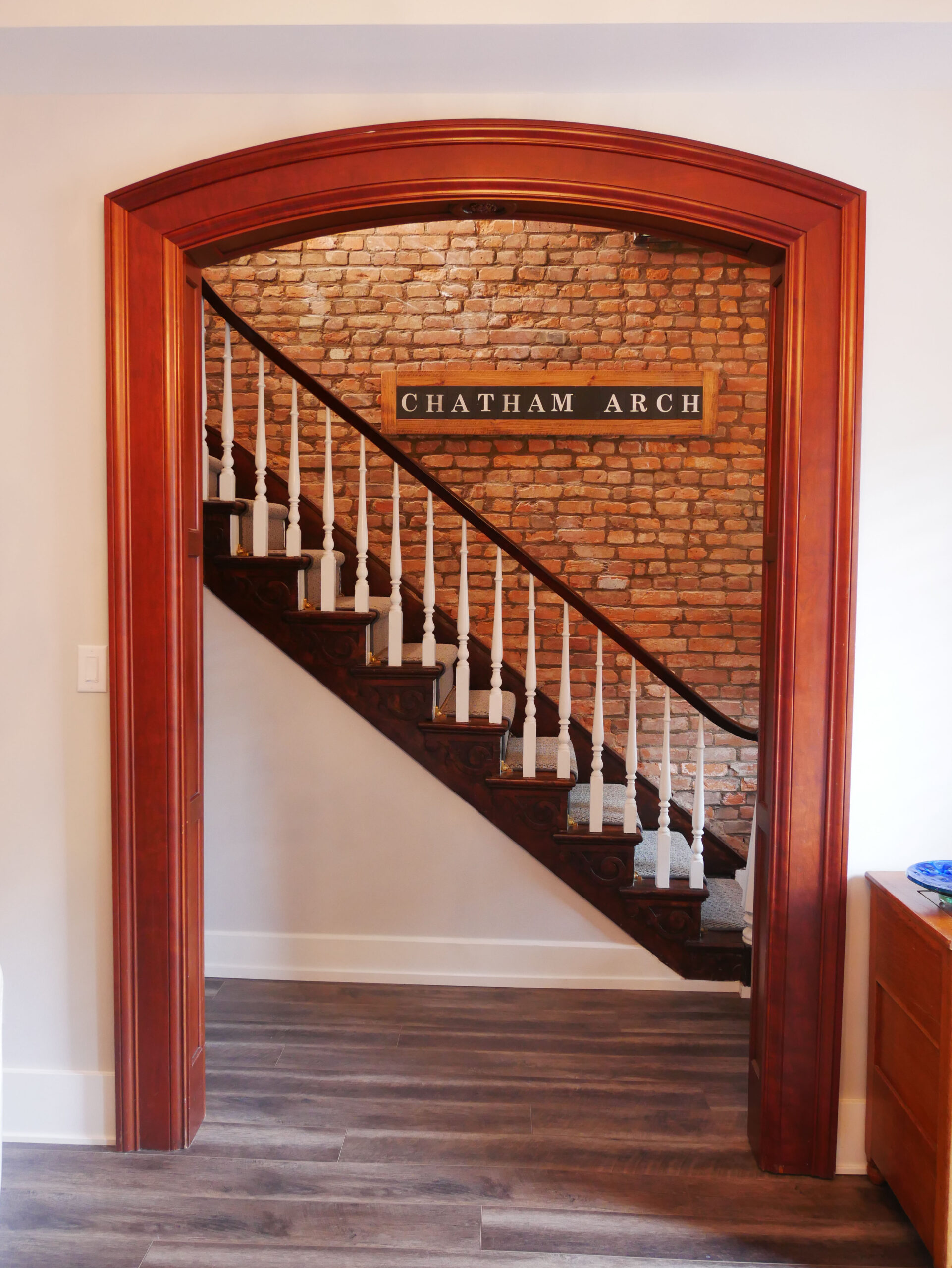 The Chatham Arch tour offers a look inside two private residences, including an artfully enlarged c.1864 house on St. Clair Street (left) and a former church adapted as a condo (right). (Photos by Bruce W. Buchanan) 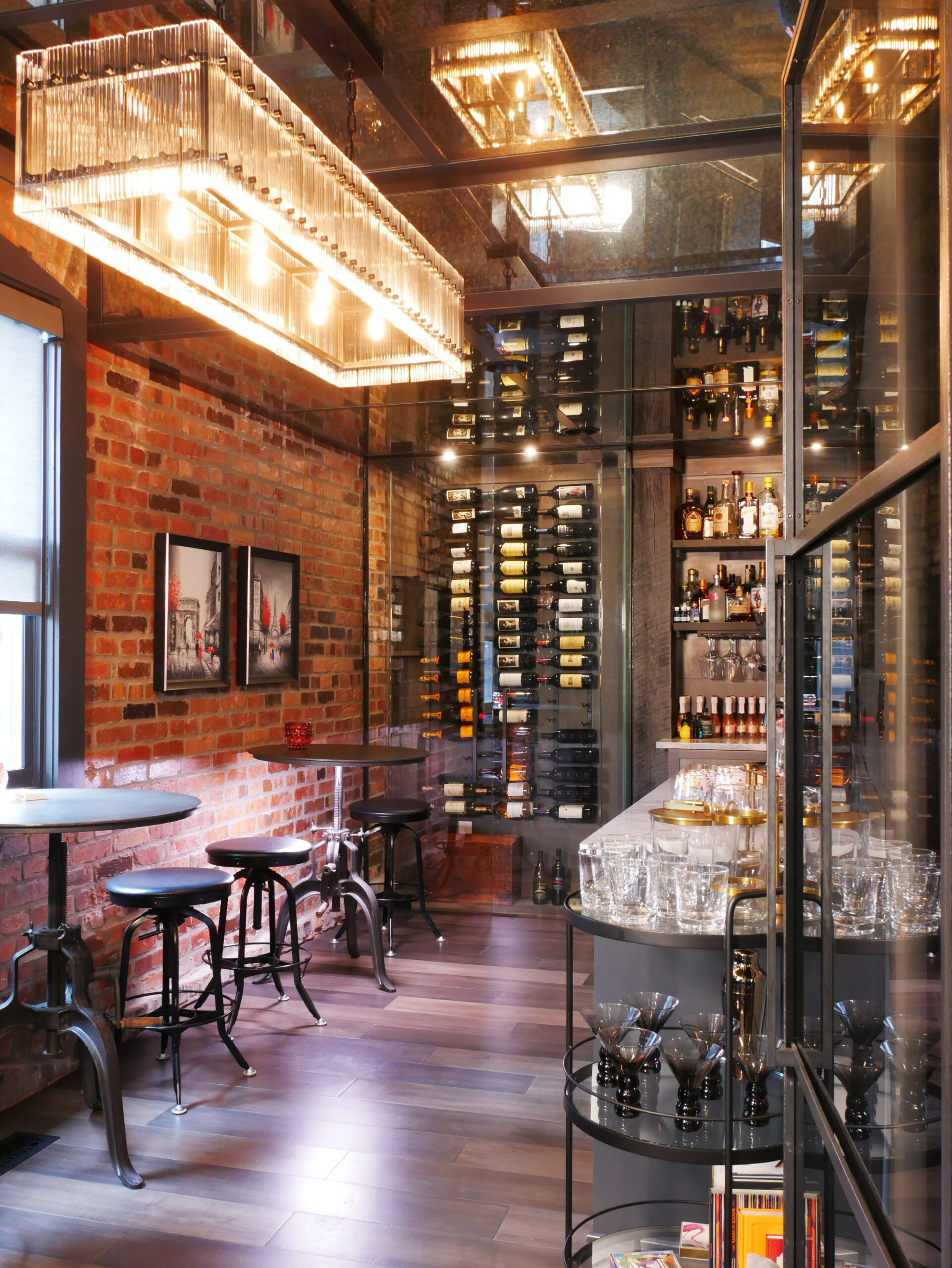 On Park Avenue, tourgoers will see a property adapted to new use multiple times since its construction more than a century ago. Built in 1907 as First United Brethren Church, the Craftsman and Tudor Revival-style structure found new purpose as the Phoenix Theatre in the late ’80s. After the theater moved out to new facilities in 2018, Phoenix Redevelopment Partners, LLC, transformed the historic church into three condominiums, one of which will be open on the tour. “The character is hard to match,” says owner Randy Swinford. “There’s exposed steel and brick. I describe it as industrial but modern.”

The tour concludes with a look at one of the area’s most recent preservation triumphs: the Bottleworks District at the repurposed Art Deco-style Coca-Cola Bottling Plant. Tourgoers will see public spaces inside Bottleworks Hotel before wrapping up at The Garage Food Hall in the bottling plant’s former garages, the perfect place to grab a bite after the tour.

Prior to the Chatham Arch/Bottleworks tour, hear the behind-the-scenes story of how a local artisan restored one of the former bottling plant’s most stunning historic features. On September 23, Indianapolis ceramicist Barbara Zech shares how she color-matched, fabricated, and applied multiple layers of glazing to colored tiles in the main building’s grand entry, lobby, and lab. The lobby alone contains 670 new pieces that depict subtle motifs like bubbles and bottles.

Visit the calendar to reserve your spot for the September 23 talk and October 5 tour. 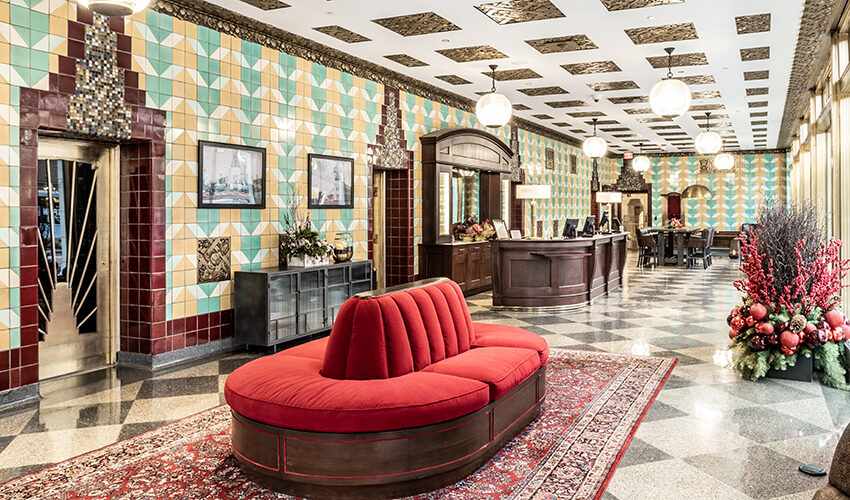 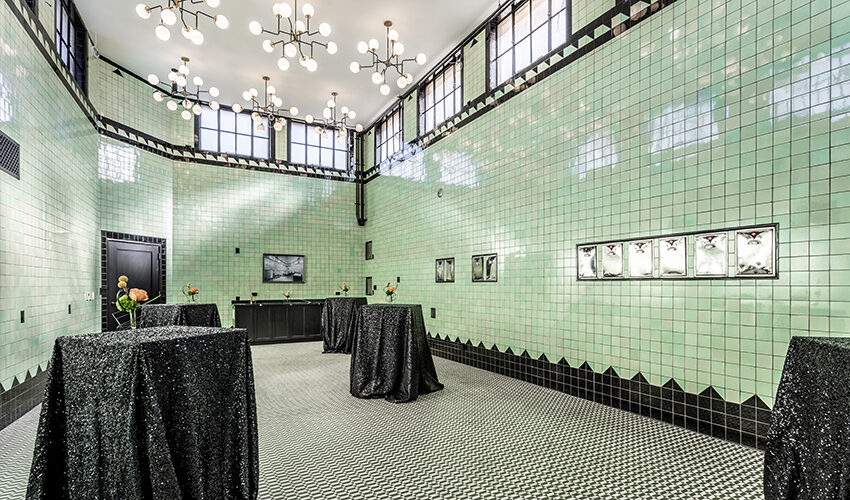 A talk on September 23 highlights restoration of tile in the hotel’s public spaces, including its spectacular lobby and a former lab (above). (Photo: Geronimo Hospitality).
Previous Next
Sign up for our e-newsletter.