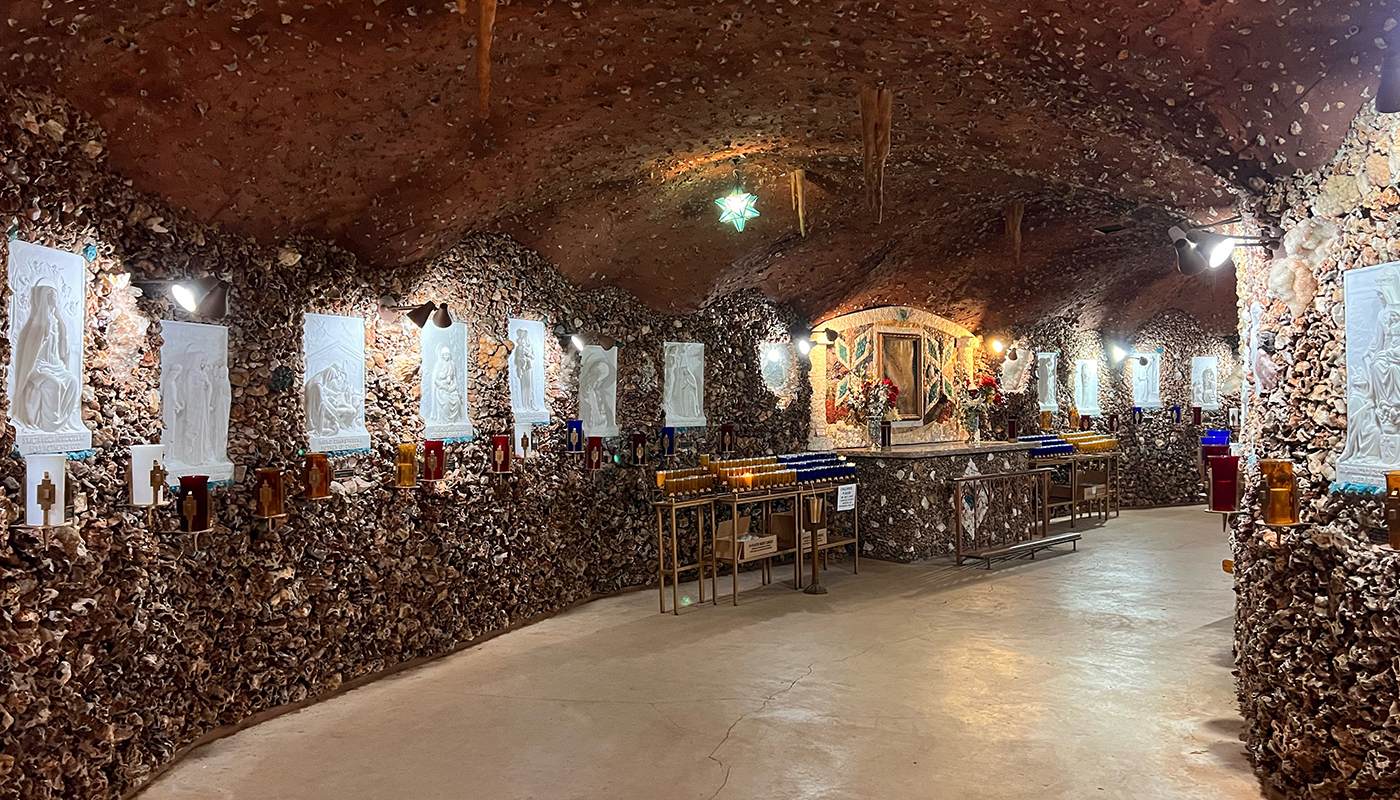 Since ancient times, grottos have carried mystical connotations, associated first with early pagan deities and later with Christian churches. The construction of man-made grottos spread after Bernadette famously saw the Virgin Mary in a natural grotto at Lourdes, France, in 1858. In Indiana, most grottos date to the twentieth century, built by religious institutions as places for spiritual meditation rather than miraculous healing. Executed in fieldstone, colorful minerals, crystals, concrete, even geodes, Indiana’s historic grottos still offer pilgrims a place for quiet reflection.

Built in 1896, the grotto at the University of Notre Dame in South Bend is believed to be Indiana’s oldest, constructed after university founder and priest Father Edward Sorin returned from a trip to see the famous Lourdes grotto. Though he died before it was completed near the campus’s Basilica of the Sacred Heart, the fieldstone grotto captures his original inspiration, designed to imitate the Lourdes grotto at one-seventh the scale.

Today, students, faculty, and visitors come to the shrine to light candles and pray in the quiet space before football games, during final exams, and at annual services for graduating seniors. In 2019, the University undertook improvements at the grotto, refurbishing and reinstalling a fountain added in 1943, and improving the surrounding landscape to make the shrine more accessible. 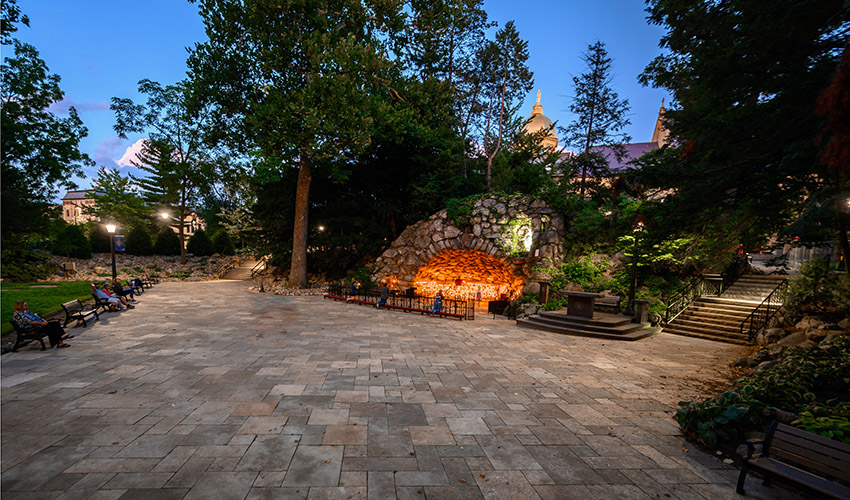 The Grotto at Notre Dame following 2019 renovation and improvements. (Photo by Matt Cashore/University of Notre Dame)

When demolition loomed in recent years at the Mother of God Grotto in Jasper, a group of residents rallied to save the historic site. In the 1950s, Father Phillip Ottavi, director of St. Joseph’s Providence Home—a care facility for mentally disabled men—envisioned creating something spiritual on the site of the home’s demolished handball court. An Italian immigrant, Ottavi also based his plan on the famous Lourdes shrine, using a large supply of geodes from a Lawrence County creek for its construction. Rough on the outside with beautiful crystals inside, he believed geodes presented a nearly perfect representation of man’s body and soul.

Working with a crew of Providence Home residents over 12 years, Father Ottavi constructed the St. Joseph and Mother of God grottos on four city blocks along Bartley Street. Equal parts sculpture, folk art, and landscape architecture, the site offered the community a restful retreat. But in 2016, Memorial Hospital purchased 4.5 acres on the site’s north end for construction of a medical residency building, threatening the St. Joseph Grotto. Volunteers quickly formed the nonprofit Friends of the Grotto group to preserve as many pieces as possible. Cathedral Health Care, owner of the south lot where the Mother of God shrine is located, donated the property to the group. Volunteers set about removing, storing, and relocating many of the threatened objects. 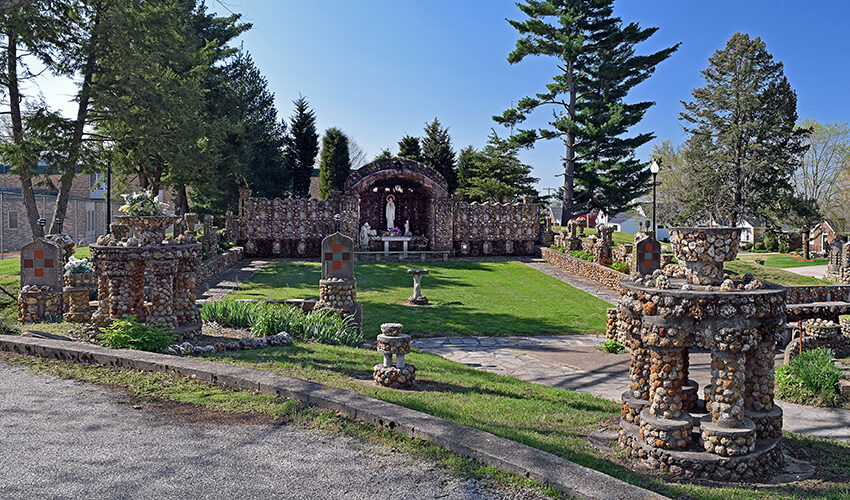 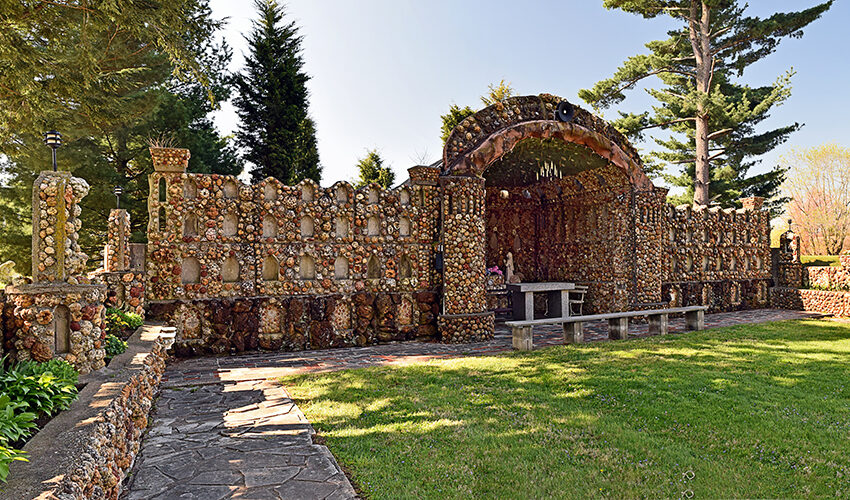 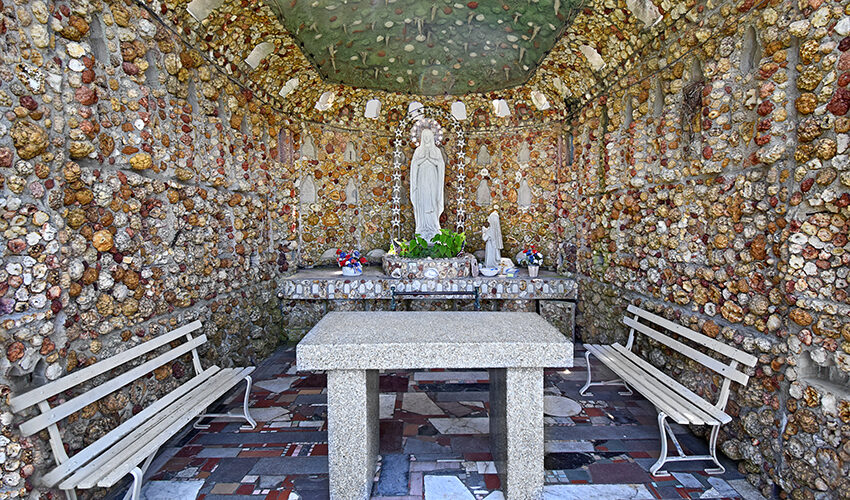 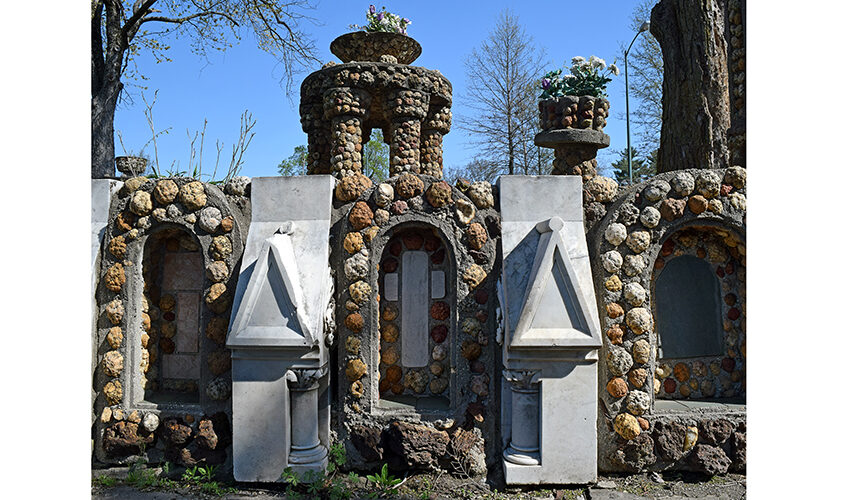 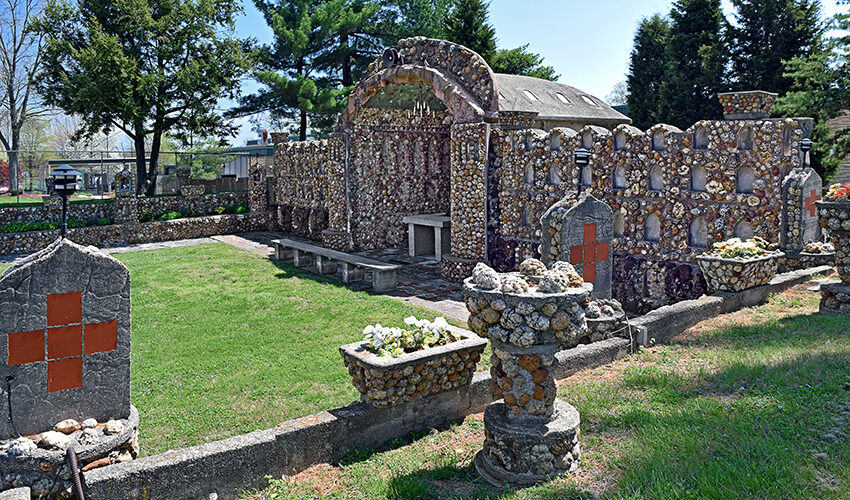 In Jasper, the St. Joseph and Mother of God grottos include a multi-block extravaganza of features constructed of locally collected geodes. Photo by Lee Lewellen
Previous Next

Over four years, the Friends relocated 32 geode planters and structures from the north lot to the remaining grotto. In 2018, the Friends hired a Bedford stone mason to re-create the plaster statue of St. Joseph holding the infant Jesus, and in June 2019, the statue—along with the previously dismantled St. Joseph Shrine archway—were installed in the Mother of God Grotto, reuniting the Holy Family.

In Munster, shrines cover the grounds of Our Lady of Mount Carmel Monastery, including one to Saint Maximillian Kolbe, a martyr of Auschwitz. But the site’s most jaw-dropping features are its grottos, including an enclosed shrine with blacklight-illuminated scenes depicting the end times. Understandable perhaps, since its creators were Polish Carmelites who probably felt all too close to the end of the world. After serving in Poland’s Free Army during World War II, the Discalced Carmelites were banished to Siberia, eventually making their way to northwest Indiana, where they began ministering to a large Polish-American community around Chicago.

In 1954, the Carmelite fathers began constructing the Holy Mother Grotto. An elaborate three-level catacomb built entirely above ground, the grotto consists of 250 tons of sponge rock painstakingly set in place. Other rock ornamentation, marble statuary, stained-glass windows and accents of fluorite, dogtooth calcite, dolomite, and rose quartz complete the décor. The nearby Grotto of the Lord’s Tomb features an apocalyptic scene of Jesus and Gabriel raising the dead, with gold crosses representing Christian martyrs set in fluorescent stones across the ceiling. The Holy Mother Grotto and Grotto of the Lord’s Tomb are typically open to visitors on Sundays between Easter and November 1. 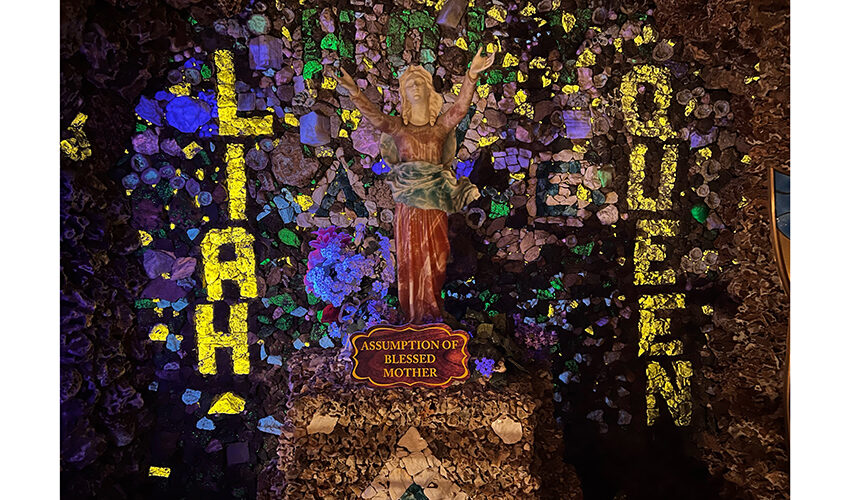 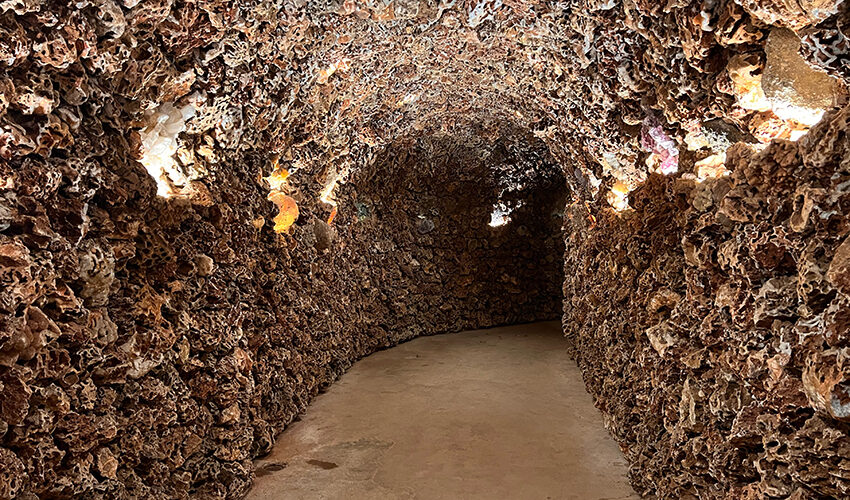 Completed in 1962, the Holy Mother Grotto at Our Lady of Mount Carmel Monastery in Munster includes three floors of chapels incorporating 250 tons of sponge rock, Carrara marble statuary, and fluorescent rocks illuminated with ultraviolet lights. Father Bernard Ciesielski, who studied geology in his native Poland, planned the complex. Photo courtesy Our Lady of Mount Carmel Monastery
Previous Next
Sign up for our e-newsletter.