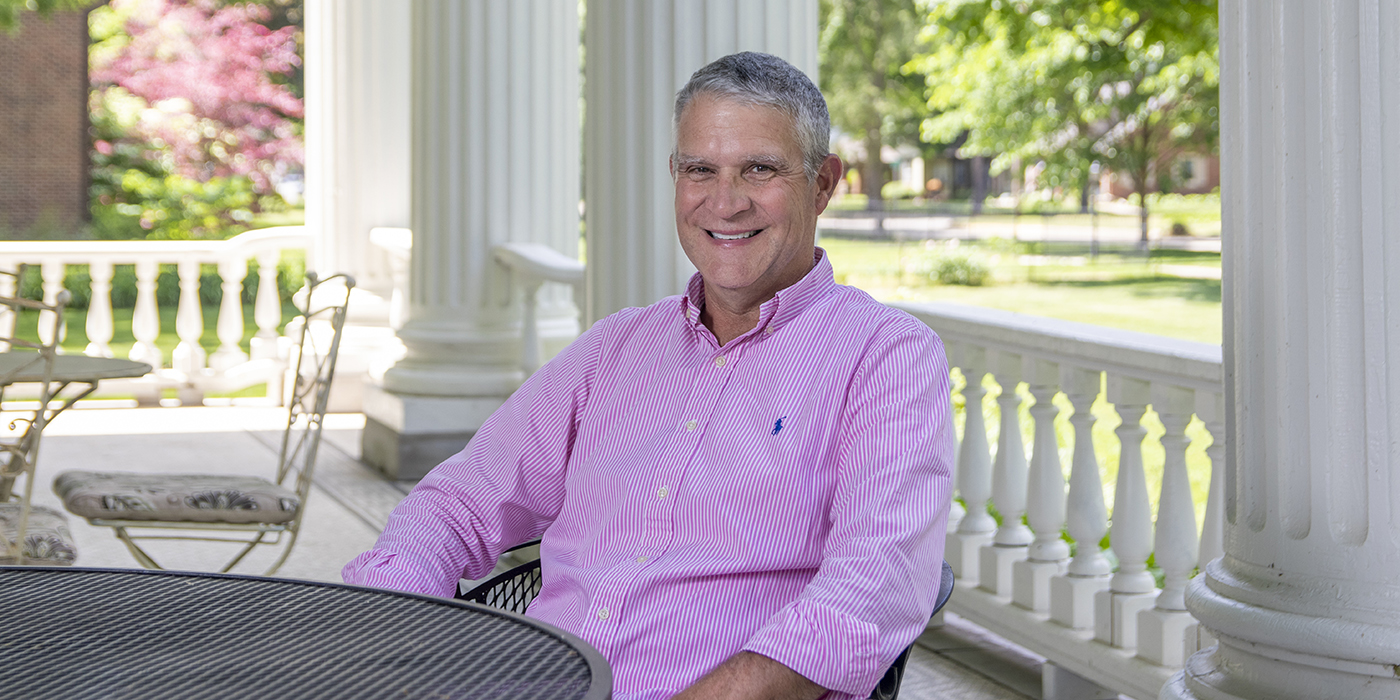 Historic buildings are in Tim Shelly’s blood, and his lifelong passion for preserving historic places and decades spent advocating for them deserve recognition. But he’s also modest. About winning Indiana Landmarks’ 2022 Williamson Prize for Outstanding Preservation Leadership he says, “I’m very honored but somewhat baffled and flabbergasted. There are so many more people than me who deserve this.”

“Tim makes a real effort to connect personally with the people who are part of individual preservation projects,” says Randy Shepherd, a member of the Williamson Prize selection committee. “It’s common to receive a handwritten note from Tim following a meeting to thank you for your contributions. His approach really makes a difference.”

Shelly’s interest in the past took root when he was a youngster in Indianapolis, living in a Craftsman bungalow near Garfield Park, where his mother, an antiques collector, fostered the family’s appreciation for old furnishings and buildings. In the late ‘60s, an excursion to downtown Indianapolis with his grandfather, Harry Steele, to visit the James Whitcomb Riley Home, President Benjamin Harrison Home, and the Indiana State Museum in the former City Hall cemented his sense of place. “I remember thinking how worried my grandfather was about highways coming through Indianapolis, seeing everything being torn down and realizing something needed to happen here,” recalls Shelly. “I recall that day very distinctly.”

Tim and his wife, Meg, moved to Elkhart in 1985 after he accepted a job in the law firm Warrick and Boyn, where today he is a partner. They practiced renovation on their historic “starter home” before taking on an 1874 Neoclassical mansion just around the corner in 1992. The property is best known as the former home of Colonel Charles G. Conn, whose Conn Instrument Company once held claim as the world’s largest manufacturer of band instruments. With an appreciation for the house’s sound “bones,” the Shellys began restoring the mansion’s original features, undoing years of disrepair to adapt it for a home for them and their two sons. 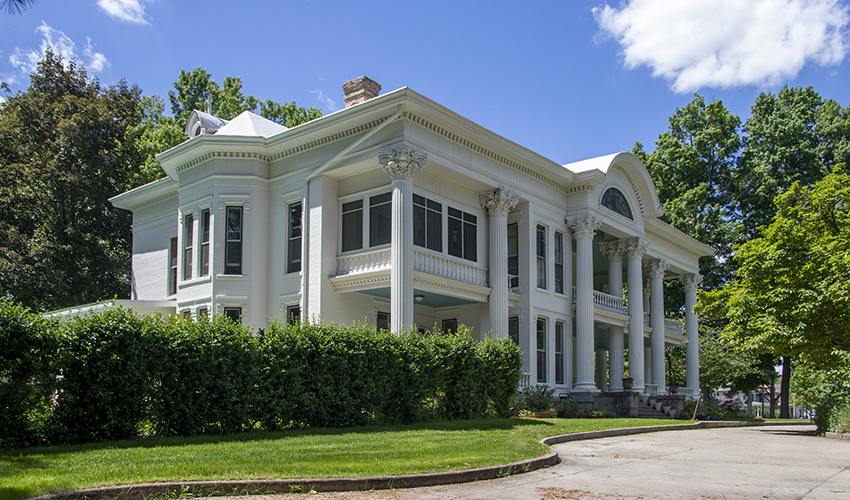 Tim and his wife, Meg, restored an 1874 Neoclassical mansion (above) best known in Elkhart as the former home of Colonel Charles G. Conn, a prolific manufacturer of band instruments.

In 1989, Tim joined the Elkhart Historic and Cultural Preservation Commission, where he helped advocate for thoughtful development in the city’s State-Division Street Historic District. His work on the preservation commission acquainted him with Indiana Landmarks, which provided professional preservation services to the group. Eventually, Tim shared his own preservation expertise as part of Indiana Landmarks’ Northern Regional Advisory Council and on the organization’s board of directors, including a term as board chair in 2013-2014. He also served on the National Trust for Historic Preservation’s Board of Advisors.

The Shellys’ hands-on involvement helped save two endangered sites in Lawrenceburg and Waveland. When the city of Lawrenceburg began tearing down vacant buildings in the ‘90s, Indiana Landmarks purchased and pledged to restore 14 buildings in the National Register-listed historic district. Tim and Meg supported the effort by buying and restoring a rowhouse for use by a family member.

Another family connection led the Shellys to a more personal preservation project, this time in western Indiana.

From 1852 to 1870, painter Theodore Clement Steele lived with his family in a Greek Revival-style cottage in Waveland, where he began to develop his craft. More than a century later, deterioration and a proposed highway threatened the cottage. After local efforts to save the property foundered, Indiana Landmarks began restoring the exterior of the house in hopes of attracting someone who would finish the interior. 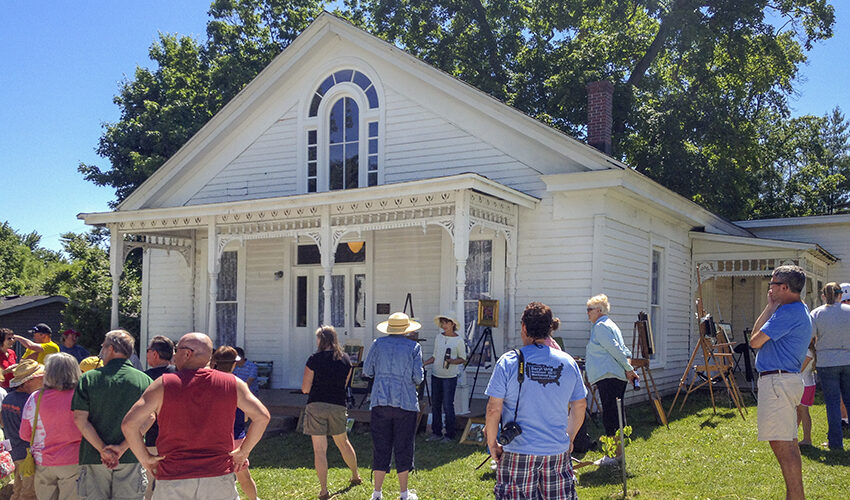 The Shellys worked with local businesses in Waveland to restore the boyhood home of painter Theodore Clement Steele, which they open to artists and local elementary school students learning about the painter’s origins. PHOTO: Courtesy Tim Shelly 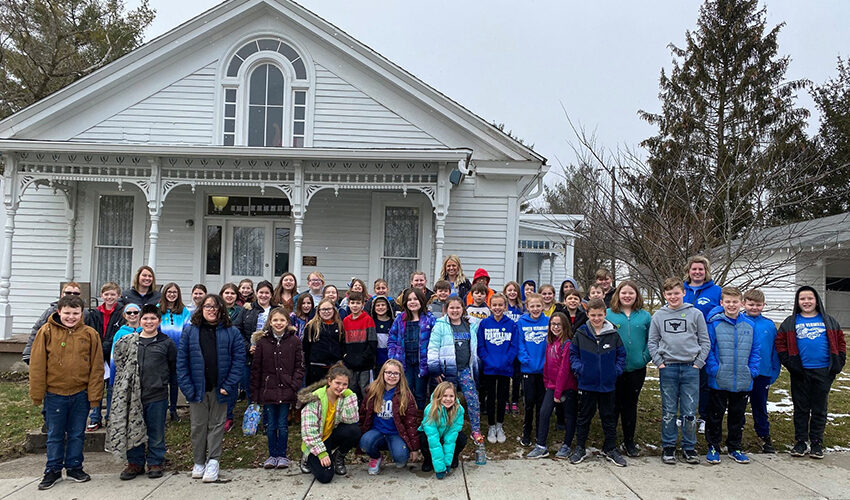 The Shellys worked with local businesses in Waveland to restore the boyhood home of painter Theodore Clement Steele, which they open to artists and local elementary school students learning about the painter’s origins. PHOTO: Courtesy Tim Shelly
Previous Next

A distant Steele relative, Tim proved to be the perfect partner for the project. The Shellys bought the property and worked with local businesses and contractors to restore it as a retreat for artists. They also sponsor field trips to the site for local elementary school students to learn about the artist’s beginnings. “I think it’s important for young people to understand you don’t have to live in Chicago or New York or Indianapolis to do important things,” says Tim. “This nationally renowned artist started in this little town of Waveland.”

Named for J. Reid Williamson, Jr., president of Indiana Landmarks from 1973 to 2005, the Williamson Prize honors outstanding leadership and achievement in preservation.

“Tim leads by example, championing not only preservation and philanthropy in his own community but at the state and national level, as well,” says Marsh Davis, president of Indiana Landmarks. “He truly embodies the tenets of the Williamson Prize, and we look forward to presenting the award to him at Indiana Landmarks’ annual meeting in September.”