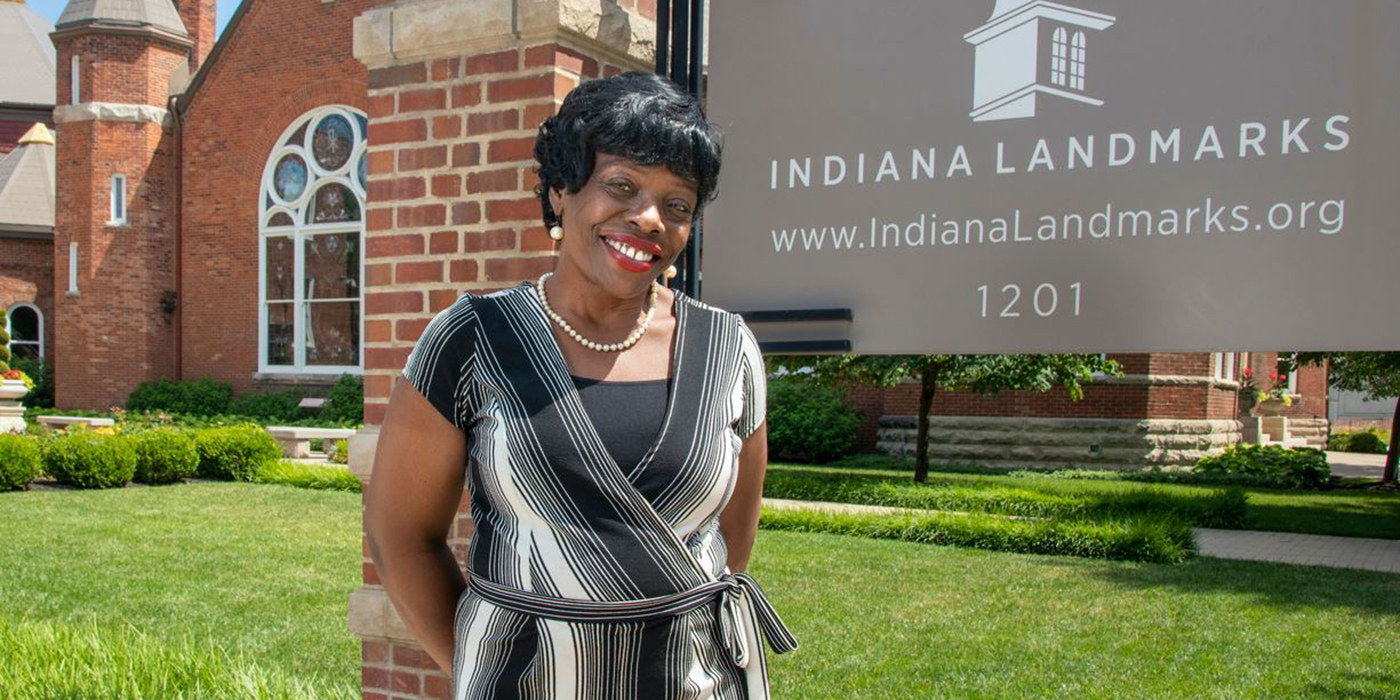 As director of Indiana Landmarks’ new Black Heritage Preservation Program, Eunice Trotter will bolster efforts to recognize Black heritage by identifying places that should be listed in the National Register of Historic Places. Another key element of the program will be building sustainable futures for Black heritage sites through new funding and strengthened support for local partners. Photo: Evan Hale
POSTED ON August 31, 2022 BY Indiana Landmarks | African American Landmarks, News

In the aftermath of Martin Luther King Jr.’s assassination, Eunice Trotter watched Robert Kennedy speak to a crowd in Indianapolis, just blocks from her home on Broadway Street. And she remembers Jim Jones going door to door in the area years earlier, seeking support for his Peoples Temple nearby.

“Discovering the history of my neighborhood made me so passionate about trying to capture the stories of so many other historic places, including those that have escaped recognition,” says Trotter. It’s an aim she’ll pursue as the new director of Indiana Landmarks’ Black Heritage Preservation Program.

As a longtime journalist, historian, and community organizer, Trotter brings more than 30 years of experience focused on communications, research, advocacy, and mentorship to her new role.

She began studying Black history as a teenage intern at the Indianapolis Recorder, one of the oldest African American weeklies in the nation. She went on to own, edit, and publish the Recorder from 1987 to 1991. She served as the first Black editor at the Indianapolis Star and was inducted into the Indiana Journalism Hall of Fame in 2017. Trotter’s award-winning book, Black in Indiana, details the history of Mary Bateman Clark, her great-great-great grandmother, whose 1821 Indiana Supreme Court case resulted in a precedent-setting decision against indentured servitude in Indiana. In 2016, Trotter received the Indiana Historical Society’s Dorothy Riker Hoosier Historian Award, honoring historians who make distinguished contributions to the field of historical scholarship.

Most recently Trotter has worked in public relations as owner of her own communications and media relations firm and as senior communications specialist for American Senior Communities. She has served on boards and committees of several organizations, including the Indiana Debate Commission, the Indiana Journalism Hall of Fame, the Kurt Vonnegut Museum and Library, and the Indiana Remembrance Coalition.

In her new position, she will coordinate a broad initiative to identify, save, and celebrate places significant to Indiana’s Black history. “It is so important these places are preserved as evidence of the uplifting power of place experienced by African Americans in Indiana,” says Trotter.

“We couldn’t be more pleased to have Eunice join our staff,” says Indiana Landmarks President Marsh Davis. “Her experience and passion will be powerful assets as we seek to expand Indiana Landmarks’ work in Black heritage preservation.”