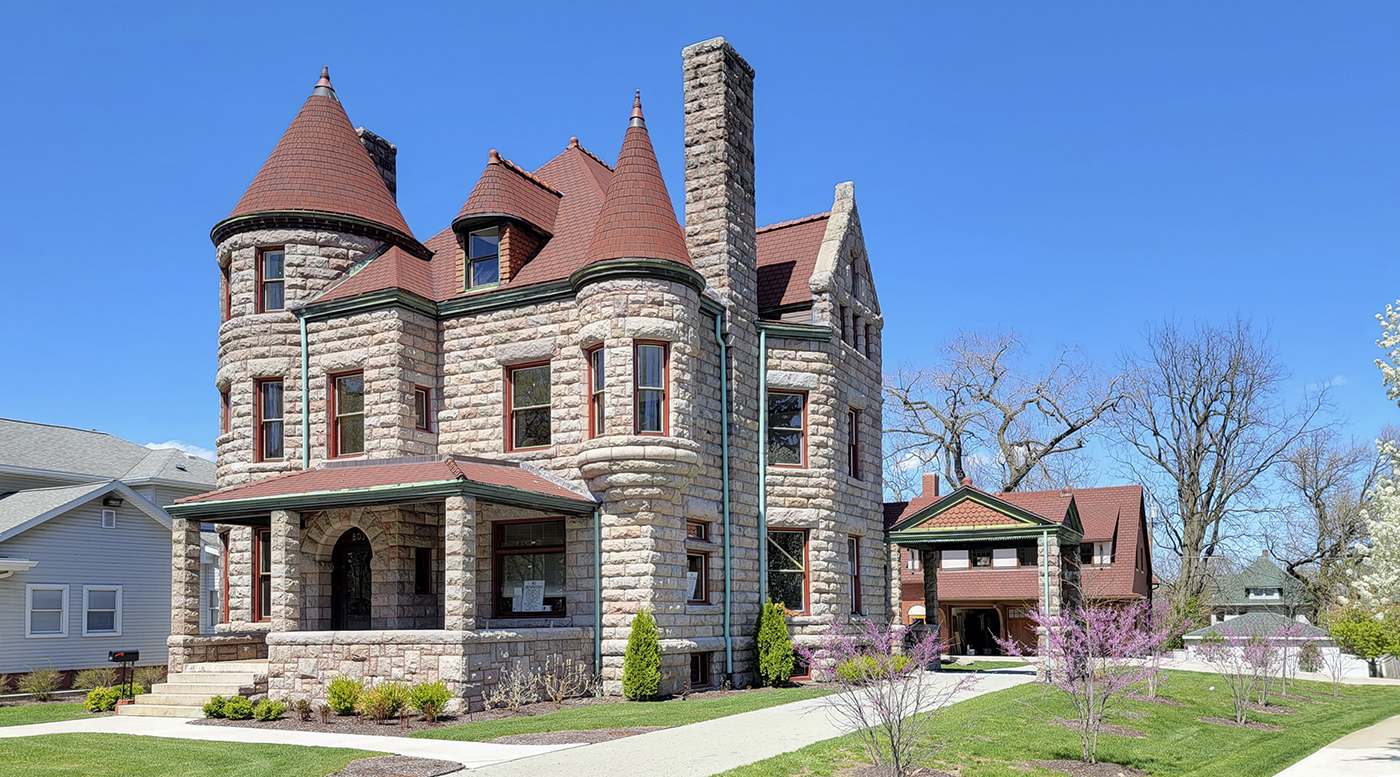 Stephen and Ed Ziegler purchased South Bend's Kizer House from Indiana Landmarks in March 2022, with plans to adapt the interior for mixed-use development.
POSTED ON January 5, 2023 BY Indiana Landmarks | News

Strategies to save meaningful places can take many forms, including supporting local efforts, and advocating on behalf of others. But sometimes, it takes a more direct approach to get the ball rolling. To carry out our mission, Indiana Landmarks frequently takes ownership of historic properties, investing in their rehabilitation before selling to buyers who can finish the work.

Last spring, we found the right match for South Bend’s Kizer House in Ed and Stephen Ziegler, a father-son team whose love for South Bend, Notre Dame, and historic buildings prompted them to purchase the Romanesque Revival-style mansion in the city’s West Washington National Register District. The pair plan to create a mixed-use facility with a café, public rental space, and apartments in the 7,220-square-foot mansion. 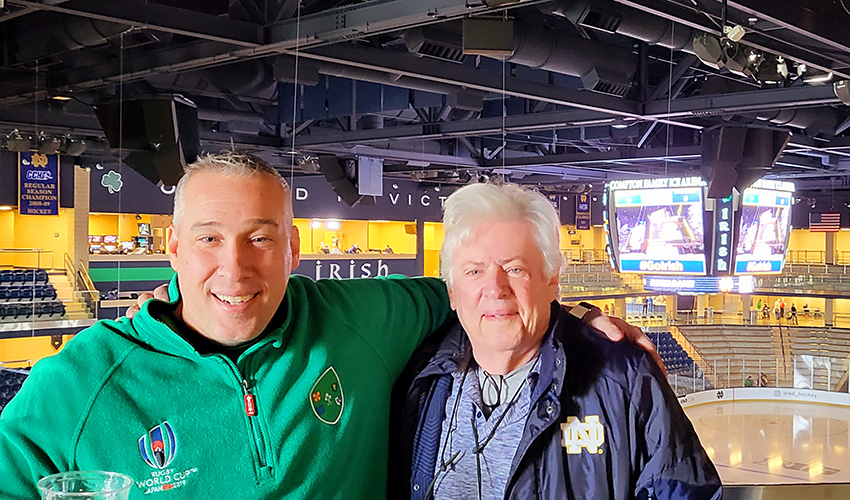 Though Ed and Stephen both live in Florida, they share deep connections to South Bend. Ed earned his Ph.D. at Notre Dame before spending a career teaching at Florida Atlantic University in Boca Raton, where he helped found the Notre Dame Club of Boca Raton. After growing up in South Florida, Stephen became a business and technology consultant and earned a master’s degree at Notre Dame’s Mendoza College of Business in 2020.

The Kizer House was on a downward path a decade ago until Indiana Landmarks partnered with the City of South Bend to save the property. We undertook complete exterior restoration of the c.1888 house, garage, and grounds, preparing the way for new owners to finish interior renovations.

“When I saw this property on Zillow, I immediately contacted the team selling it to see how I could be first in line for this,” says Stephen. “I actually bought it sight-unseen. I had to trust what Indiana Landmarks was doing as part of my decision.” 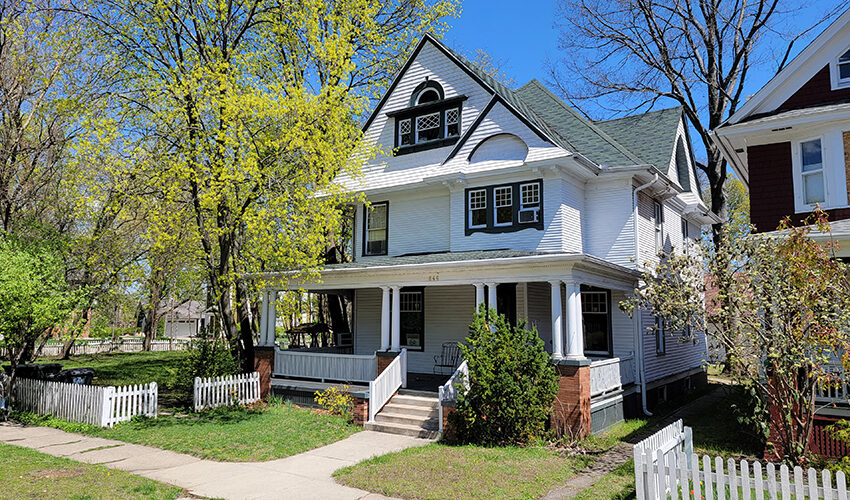 Looking for a place to retire near family, interior design professor Katherine Swank found the right match in the 1907 Rodes House (above) in South Bend. 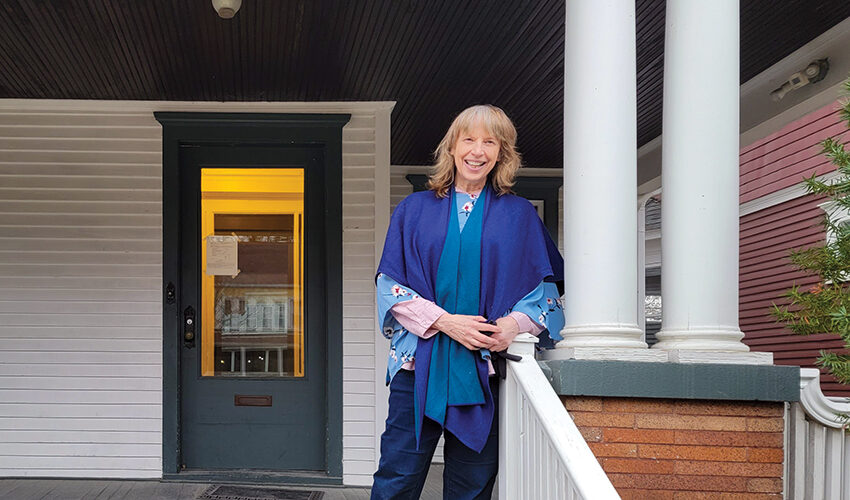 Looking for a place to retire near family, interior design professor Katherine Swank (above) found the right match in the 1907 Rodes House in South Bend.

In fall 2022, Indiana Landmarks relocated the 1929 Arthur May House to South Bend's Chapin Park Historic District, where we'll stabilize the property before offering it for sale.
Previous Next

After 40 years as an interior design professor in North Carolina’s Eastern Carolina University, Katherine Swank wanted to return to the Midwest to be closer to family. “My brother asked me what kind of home I was looking for, and I described a Civil War-era house in eastern North Carolina that had such a sense of place,” says Katherine. “After I finished talking, he sent me a photo of 846 Park Avenue in South Bend.”

The 1907 Rodes House’s abundance of natural light appealed to her artist’s sensibilities, and the Chapin Park Historic District reminded Katherine of where she grew up in Dowagiac, Michigan. “I find that when you go into a historic district, you’re surrounded by a fellowship of like-minded people who share an appreciation of cultural heritage,” says Katherine. She purchased the property from Indiana Landmarks and is working with students at Notre Dame to brainstorm accessible renovations that will allow her to stay in the house for years to come. “Throughout my career, I’ve tried to meld design projects with historic structures that need to be preserved. There’s this whole notion of sustainability and looking at how the existing housing stock can be repurposed, continuing the legacy of those who lived before.”

In that spirit, she’s admired work underway at the lot next door to her new home, where last fall Indiana Landmarks relocated the 1929 Arthur May House. The stately Georgian Colonial house previously occupied a corner of a Memorial Hospital parking lot—the last house standing in a formerly residential area. We partnered with owner Beacon Health System on a plan to save the house and restore it to use as a single-family home by moving the two-story structure to a thriving residential area. We’ll complete stabilization work before offering the house for sale. 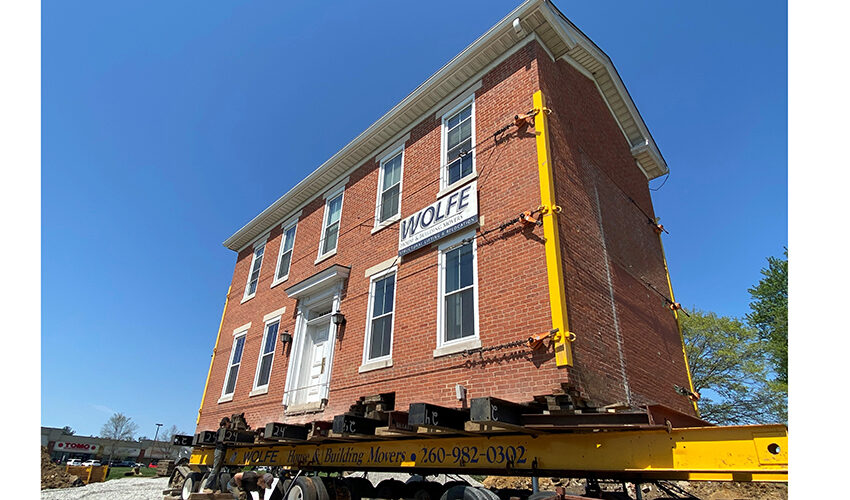 When development threatened New Albany's Smith-Phillips Farmhouse, Indiana Landmarks partnered with developer Hogan Real Estate to save the brick building by moving it to a new lot. 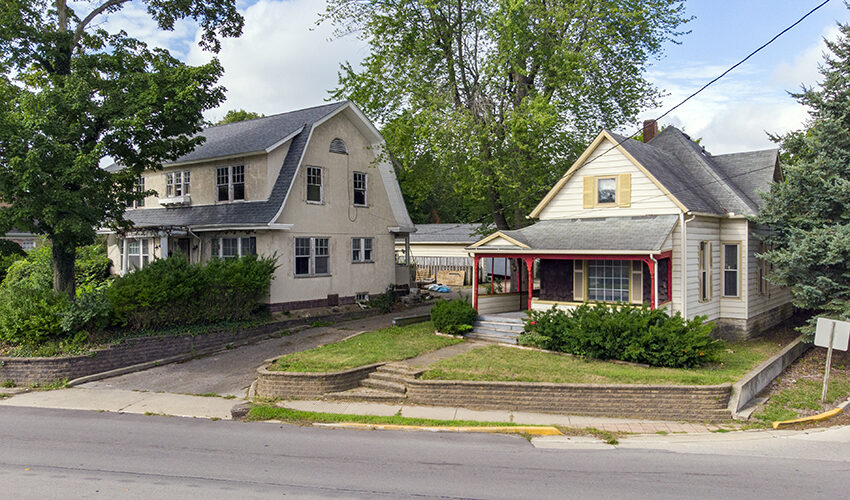 In Wabash, the Cosby family reached out to Indiana Landmarks to help save two historic houses in the North Wabash Historic District. 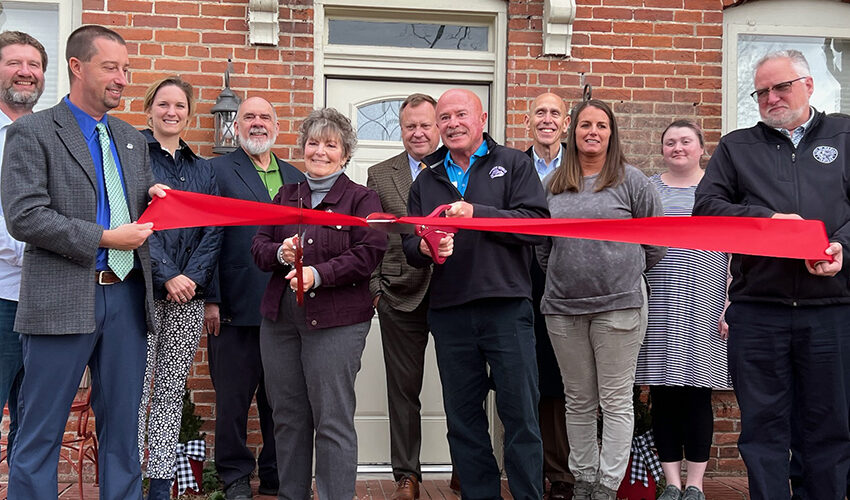 In 2022, Indiana Landmarks and Wabash leaders celebrated the completion of Waypoint Wabash, a transitional home for women located in a Second Empire-style house that Indiana Landmarks renovated for the nonprofit. 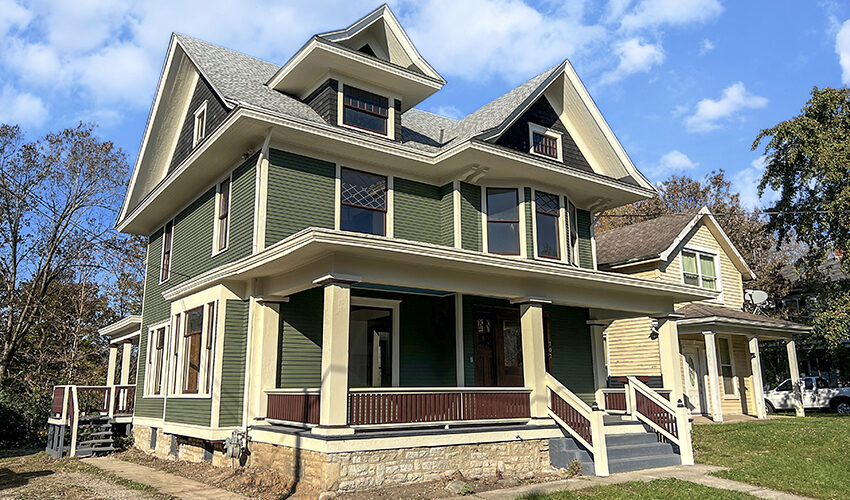 In Aurora, Indiana Landmarks intervened to prevent demolition of a c.1905 house on Hanover Street, buying the property and kickstarting rehabilitation before selling the house to buyers that could complete the work.
Previous Next

In Wabash, one family saw an opportunity to partner with us to preserve their mother’s legacy. For years, the Cosby family lived in a large Dutch Colonial-style home in the National Register-listed North Wabash Historic District, where Mary and Jim raised five children and Mary channeled her abundant energy into a variety of civic, social, and entrepreneurial activities. After earning a degree in early childcare education, she bought an adjacent c.1890 home for her growing daycare business. Upon her death, Mary’s grown children looked for a way to save their mother’s beloved home, but a high mortgage balance complicated their plans. Mary’s daughter-in-law Cindi Cosby, an ardent preservation advocate, reached out to Indiana Landmarks for advice.

Working through a tangle of legal and financial red tape, last March Indiana Landmarks was able to acquire the properties from Mary’s estate, with the blessing of her large family. We will make basic repairs and complete exterior rehabilitation on both houses before selling them with preservation covenants to buyers who will finish interior work. The project is part of our revitalizing work in Wabash, where we’ve sold three historic houses in the past fiscal year, including the completion of Waypoint Wabash, a transitional home for women located in a Second Empire-style house that Indiana Landmarks renovated for the nonprofit.

A longstanding relationship with Indiana Landmarks inspired Tell City leaders to collaborate with us on saving a historic house in the city’s Swiss District. When the City acquired a vacant c.1885 house in a sheriff’s sale, it turned to Indiana Landmarks to help revive the blighted property. After fixing the collapsing front porch, removing aluminum siding, repairing clapboard, and adding a new roof and fresh paint, we’ll sell the house with preservation covenants, returning it to the City’s tax rolls and helping preserve the neighborhood’s historic character.