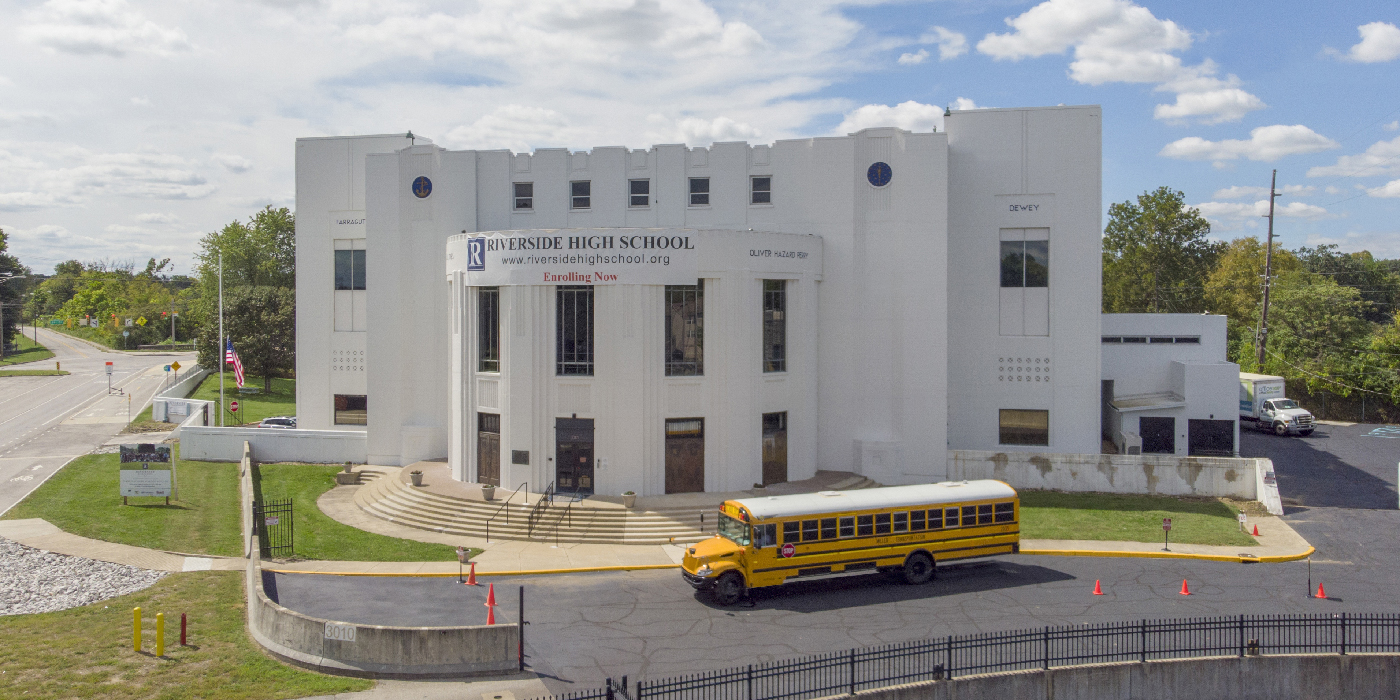 On September 13, teachers, students, and dignitaries crowded the gym of the Heslar Naval Armory on Indianapolis’s northwest side to celebrate the building’s opening as Riverside High School. To the tune of “Anchors Aweigh” sung by the school choir, Riverside’s Head of School Katie Dorsey cut a blue ribbon, marking the culmination of a four-year effort to save and repurpose the gleaming white landmark on White River. 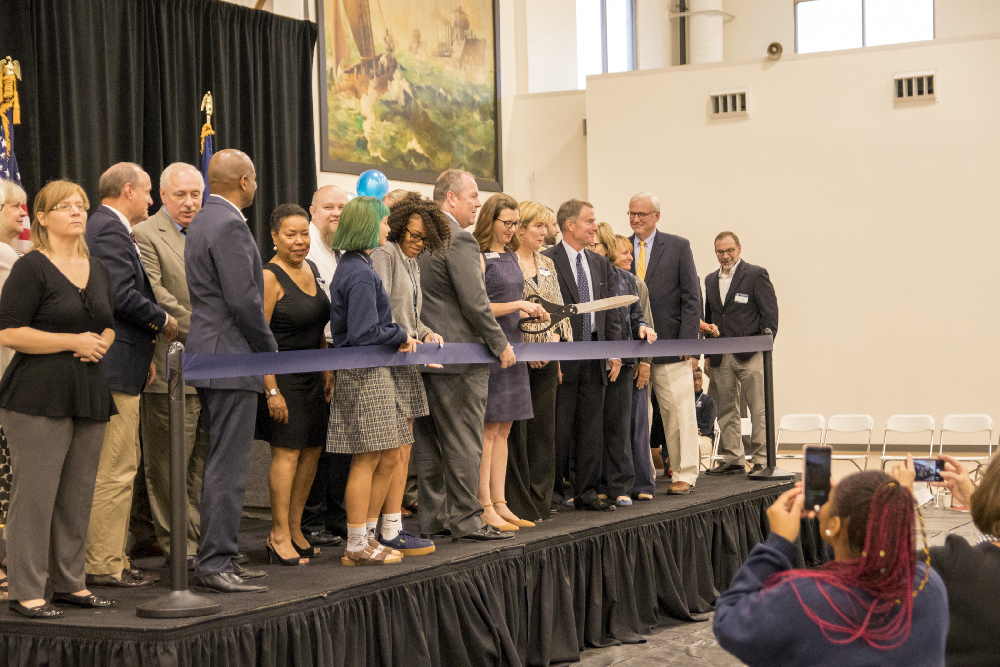 The new school in Indianapolis’s Riverside neighborhood is expected to catalyze revitalization and reinvestment beyond the boundaries of its campus, a core commitment of the school. Riverside High School will eventually hold a maximum of 600 enrollees, including students from at-risk and middle-income backgrounds.

Works Progress Administration workers built the Indianapolis Naval Armory in 1937-38. Indianapolis architects Ben H. Bacon and John P. Parrish designed the Art Moderne-style structure for use as a reserve base for the U.S. Navy, later joined by the Marine Corps. The streamlined concrete armory, anchored on the east bank of the White River at West 30th Street, features nautical imagery throughout the building, including the names of naval heroes John Paul Jones and David Farragut carved into the façade.

The Navy decommissioned the building in 2015 and transferred it to the City of Indianapolis. Indiana Landmarks assumed ownership of the building until the school was ready to assume responsibility for it.

The new Riverside High School is similar in its educational approach to the esteemed Herron High School on East 16th Street. A free charter school open to students throughout Indiana, Riverside joins Herron in offering a rigorous classical, liberal arts education, where every pupil takes four years of Latin. 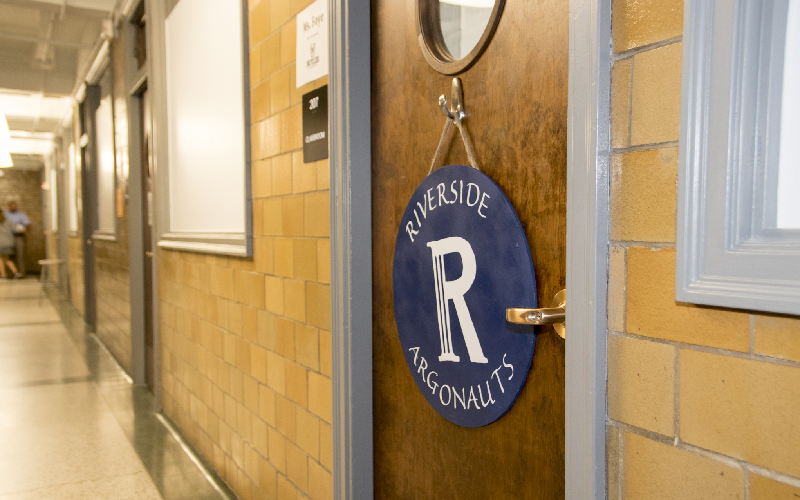 In keeping with the school’s maritime architecture and classical curriculum, students at Riverside will be known as Argonauts. A coffee bar of the same name is planned for the former Captain’s Lounge, complete with curving glass block walls and a nautically inspired terrazzo countertop. Students dine in the adjacent mess hall overlooking the river, complete with original spherical light fixtures depicting the continents of the globe in low relief.

ICS took care to preserve the building’s distinctive architectural features, including wood doors with porthole windows, stair rails wrapped in nautical rope, an inlaid anchor in the terrazzo entrance floor, and the former military training gymnasium now used for team sports. The school retained naval battle murals by Charles Bauerle in the gym, a powerful reminder of the building’s heritage. 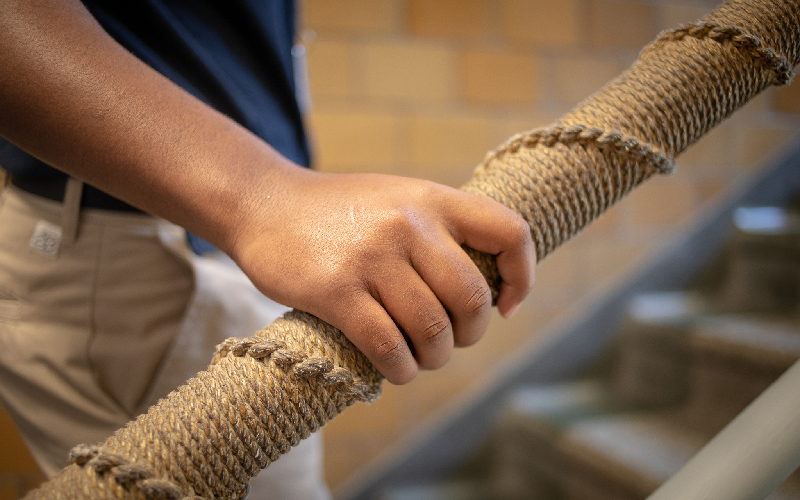 Rope wraps the stair rails at Riverside High School, a lingering reminder of the building’s history as a naval armory. (Photo: Brian Paul)

On November 10, Indiana Landmarks will host an “after” tour of the restored Riverside High School to showcase the building’s stunning transformation. Check the tour page for details and reservations.