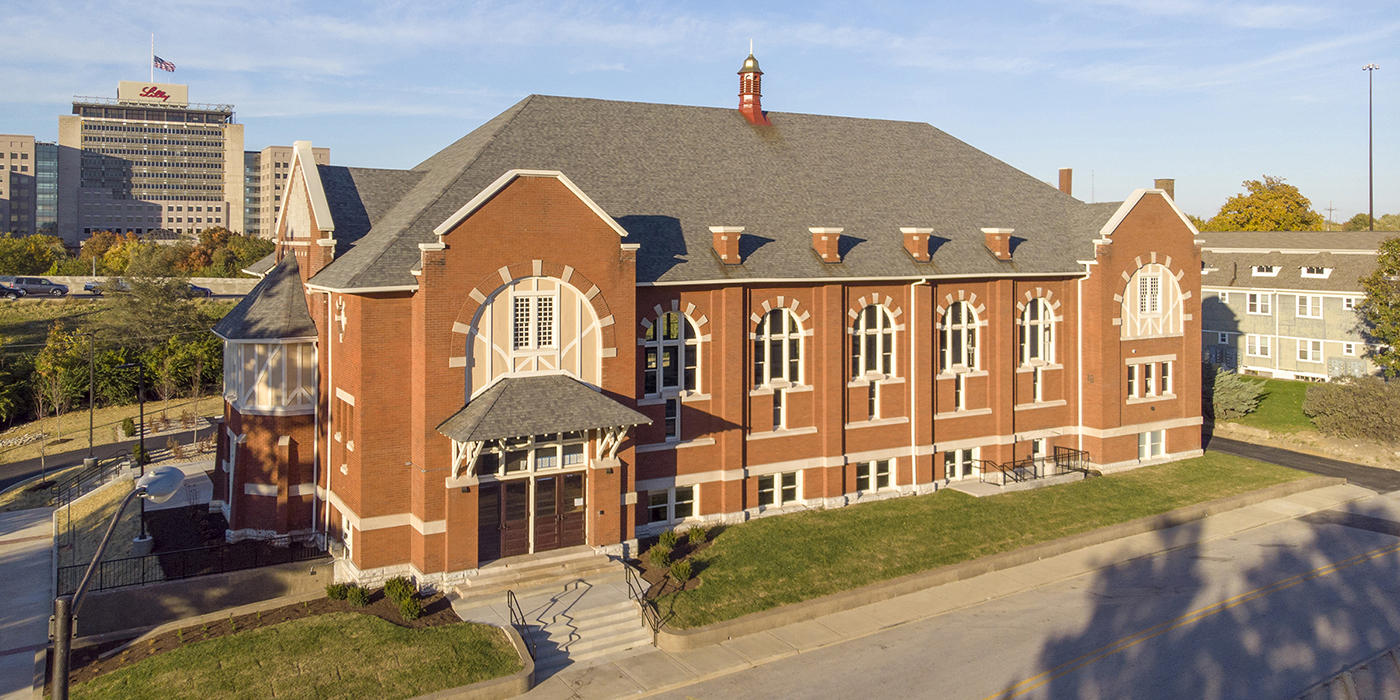 In November, a crowd celebrated the grand opening of Indianapolis’s South Side Turnverein, a former 10 Most Endangered entry, as the headquarters for Point Comfort Underwriters, a medical claims management organization and international travel insurance company. The adaptive use of the German social club and gym is exactly what we aim for when we put landmarks on our 10 Most Endangered list.

At the turn of the twentieth century, Indianapolis’s German-American community hired architects Vonnegut & Bohn to create a clubhouse where they could practice the “sound bodies and sound mind” principles of Friedrich Jahn, who believed physical exercise and cultural activities led to a healthy life. The firm led by Bernard Vonnegut and Arthur Bohn, both sons of athletic and German immigrants, had already designed Das Deutsche Haus (later known as The Athenaeum), a downtown turnverein.

Built in 1900 at 306 Prospect Street, the red brick building contained a gym bordered by a proscenium stage usable for athletics and suitable for performances and social gatherings, with a bowling alley and pub on the level below. The firm recruited Austrian Rudolf Schwarz, who had created the limestone sculptural groups for the Soldiers’ and Sailors’ Monument, to produce an allegorical sculpture group for the west gable. 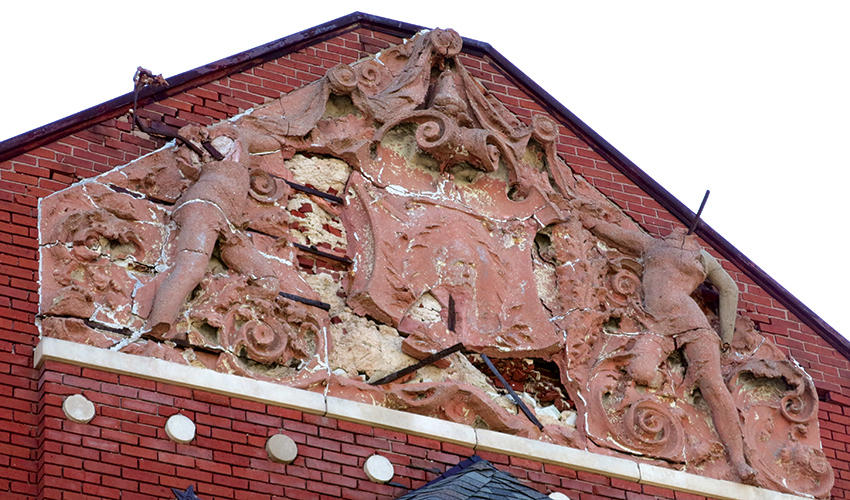 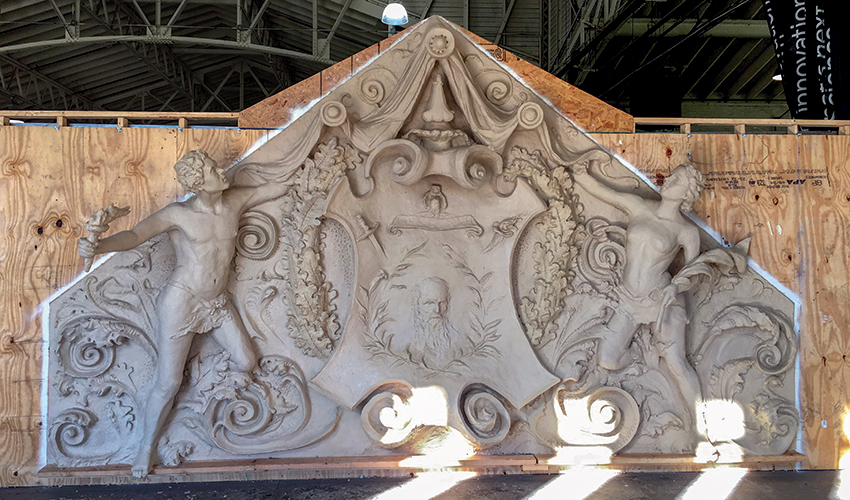 Point Comfort had the artwork replicated in a material that will withstand Indiana's winters, with fragments of the original to be reused as artwork inside the building. (Photo courtesy RATIO)
Previous Next

The South Side Turnverein served its intended purpose for decades, until membership dropped off and the club sold the building in 1977. While a tavern operated in the lower level and the gym rented to basketball leagues, the slim revenue led to slow demolition by neglect.

Point Comfort Underwriters owners William Atkins and Betsy Brougher have a serial adaptive use track record. They previously located their businesses in historic venues, rehabilitating the former Harry Wood Vocational Training School and Indianapolis Public School No. 9 for their enterprises. Most recently located at the Stutz Business Center in the historic Stutz automobile factory, the pair was on the hunt for a building to accommodate their growing company when the South Side Turnverein caught their eye. The appeal came from the club’s historic character and its easy access to interstates, parking, walking distance to restaurants, and proximity to the revitalizing Bates-Hendricks neighborhood.

“The bones of this building were so strong and sturdy, its architectural elements and quality of craftsmanship so incredibly enduring that it was amazing,” says Atkins. “I always felt somewhat stifled in traditional work environments. Here, the environment creates a workplace where people can see room for expanding and advancement, where they can be passionate about their work.” 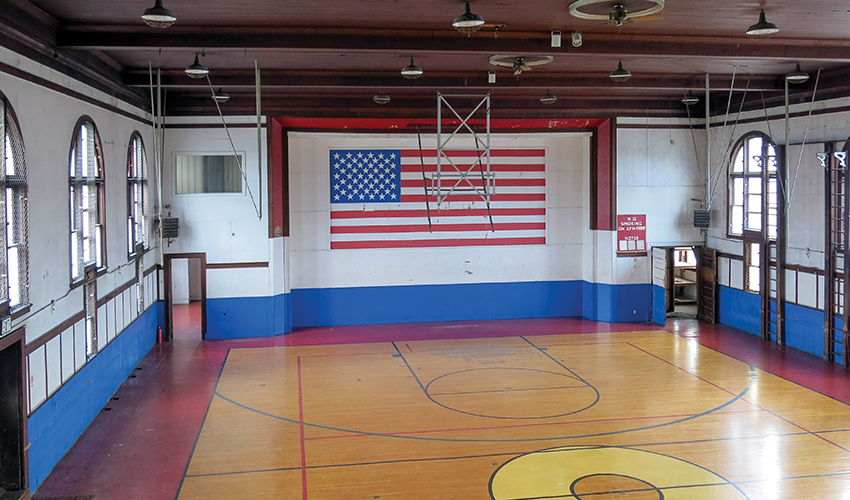 The rehabilitation removed added walls and dropped ceilings and restored the historic windows. You can see the finished result when Indiana Landmarks hosts a Landmark Look on March 2. (Photo courtesy RATIO). 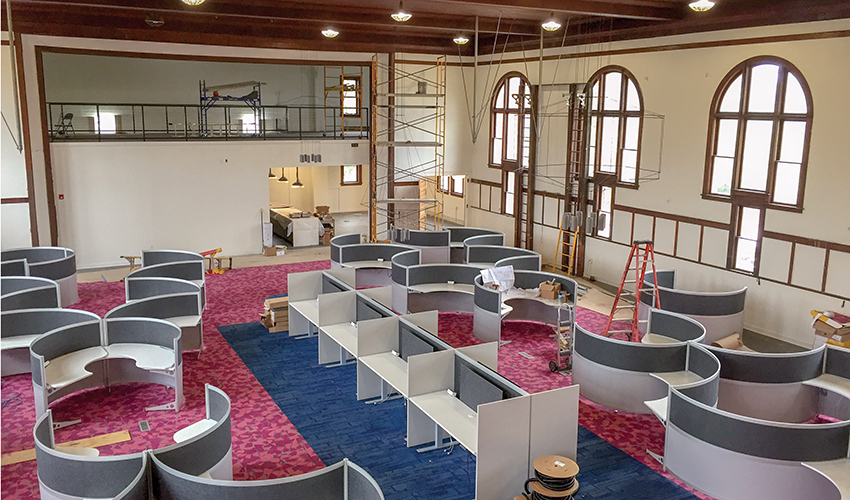 The rehabilitation removed added walls and dropped ceilings and restored the historic windows. You can see the finished result when Indiana Landmarks hosts a Landmark Look on March 2. (Photo courtesy RATIO).
Previous Next

Indianapolis architecture firm RATIO worked with Point Comfort Underwriters on the comprehensive rehabilitation, which qualified for the federal Historic Tax Credit, pursued by the company at Indiana Landmarks’ recommendation. After added walls and dropped ceilings came down, original features were revealed, including a pressed metal ceiling and historic windows that brought daylight to the center of the building.

They rebuilt a grand staircase disassembled by previous owners, installed an energy-efficient heating and cooling system, and reopened the stage, boxed in for a racquetball court in the ’80s. They restored the building’s historic windows, more than 150 in all, and the character-defining cupola that hadn’t seen attention for 117 years. Original blueprints from Vonnegut & Bohn, along with physical clues uncovered along the way, guided the rehabilitation.

Conservators declared the crumbling stucco sculpture by Schwarz, with metal bars protruding from headless figures, too damaged to save. In its studio in the historic laundry building at Indianapolis’s Central State Hospital, Ignition Arts used the remnants and historic photographs to replicate the sculpture in fiberglass—much lighter and therefore friendlier than the original to the historic brick wall. The owner plans to display fragments of the original as artwork inside the building.

The South Side Turnverein merges the best of old and new. The former gymnastics hall with its 33-foot ceiling and abundance of daylight provides a space for collaboration among Point Comfort Underwriters’ workforce. The owners expect the landmark to remain a gathering space, hosting community events in underutilized spaces after business hours.

“The spatial environment had to work and at the same time, the history was of equal importance to us,” says Atkins. “It’s always great to have the opportunity to save something in a way that allows you to have a conversation with the past.”

It’s a 10 Most turnaround worth celebrating. See the rejuvenated space for yourself when Indiana Landmarks hosts a Landmark Look on March 2 from 3-5 p.m.