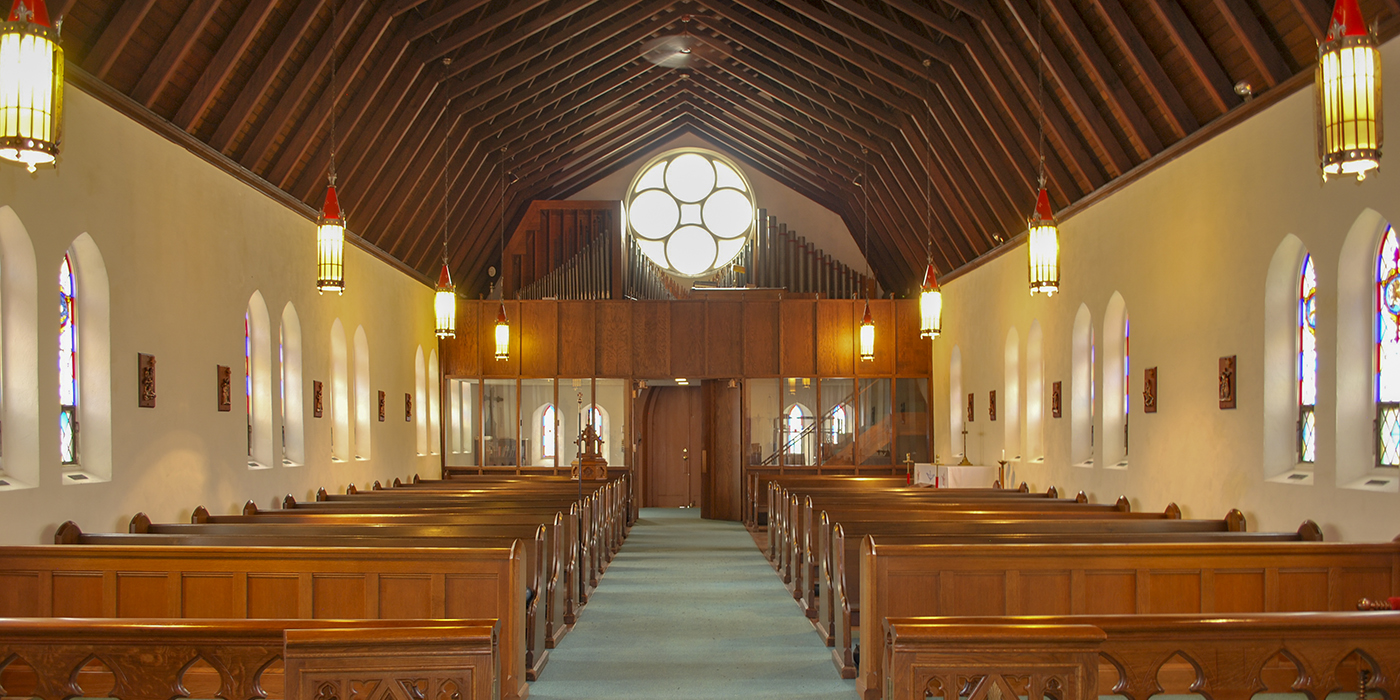 After Connersville's Trinity Episcopal Church closed in 2018, the diocese donated the 1856 Gothic Revival church and parish house to Indiana Landmarks to guarantee its preservation. We're repairing the landmark and looking for a buyer. (Photo: Jessie Russett)
POSTED ON January 3, 2019 BY Indiana Landmarks | News, Sacred Places, Uncategorized

As the new year dawns, Indiana Landmarks owns five former houses of worship, landmarks we bought or that were gifted to us when the congregations dwindled, in one case to a single parishioner. It’s a deeply troubling trend. We’re searching for buyers who’ll repurpose some of these places, architecturally among communities’ most significant structures. Indiana Landmarks Center in Indianapolis occupies such a structure, a nineteenth-century Methodist church we adapted as theaters, reception hall, gallery, and office building.

As Protestant, Jewish, and Catholic congregations shrink in number, they struggle with a tough religious and preservation challenge: how to maintain aging landmarks built for much larger congregations and facing deferred maintenance. Indiana Landmarks plays a leading role in advocating for these important places, seeking solutions for shuttered church buildings and providing stewardship and building advice to congregations still occupying their historic structures.

We don’t own Richmond’s Reid Memorial Presbyterian Church, but it’s a landmark that must be saved. A bell tower soars above the Gothic limestone exterior, constructed in 1904-1906 at the corner of North A and 11th streets. Stained-glass windows and furnishings by New York’s Tiffany Studios make the interior a stunning experience—and a rarity—enhanced by a dramatic fan-vaulted ceiling, carved wood trim, and a historic organ built by Boston’s Hook and Hastings. 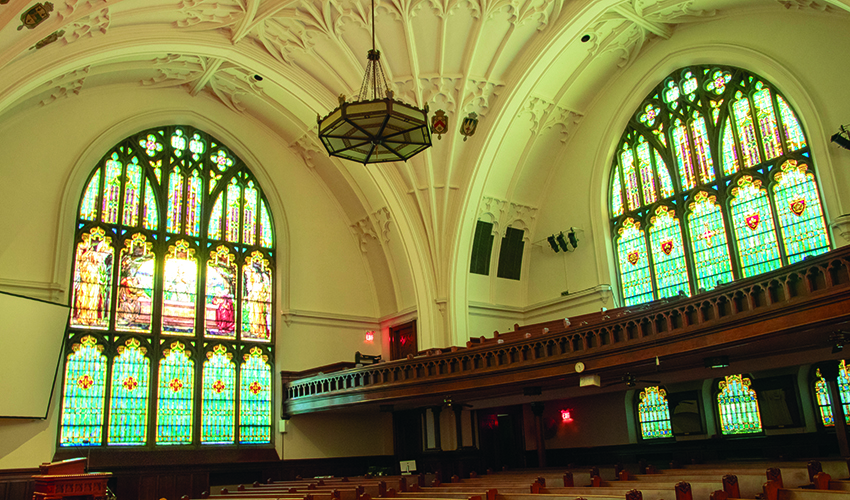 Indiana Landmarks is working to preserve the stunning Reid Memorial Presbyterian Church in Richmond with a Tiffany Studios-designed interior. The church closed in 2017 and faces an uncertain future. (Photo: Evan Hale)

The church sits empty after diminished attendance prompted the presbytery to close the building in 2017. Indiana Landmarks has been working with local groups to create a future for the building. A complicated ownership situation makes its next chapter unclear. Built through a gift from Richmond industrialist Daniel Reid, the church’s deed stipulates that should the building cease functioning as a church for a decade, Reid’s heirs can take ownership. And out-of-state interest in acquiring the windows threatens the integrity of this extraordinary work of art. We’ll continue to make the landmark a top preservation priority in 2019.

In Connersville, the diocese donated Trinity Episcopal Church to us, knowing it would be protected. Using a $10,000 grant from the Efroymson Family Fund of the Central Indiana Community Foundation, Indiana Landmarks repaired the roof of the 1859 Gothic Revival church and is repainting the adjacent parish house built in the same era. We’re offering the two buildings for sale, with preservation easements to protect their exterior character, for $70,000. You can get more details and see additional photos at indianalandmarks.org/for-sale.

Three years ago, we created Sacred Places Indiana, a program aimed at turning the tide by helping congregations remain in historic houses of worship. Originally a three-year pilot funded by a $1.2 million grant from Lilly Endowment, we won support for another year from the Allen Whitehill Clowes Charitable Foundation, Inc., and the Efroymson Family Fund. Launched in 2015 in partnership with Philadelphia-based Partners for Sacred Places, the program has provided intensive training in landmark stewardship, community engagement, and fundraising to 29 congregations in historic churches dating from 1849 to 1964.

David Frederick directs the program and he’s encouraged by the success of many participating congregations. “Here’s just one example,” he offers. “Spencer Presbyterian Church, a participant in the second-year cohort, harnessed the training we provided to address the needs of its 1879 structure and engage the community. It was the first in its cohort to apply for one of our $5,000 Sacred Places Indiana planning grants.” The congregation hired Bloomington’s Matheu Architects to survey the church and establish repair priorities. 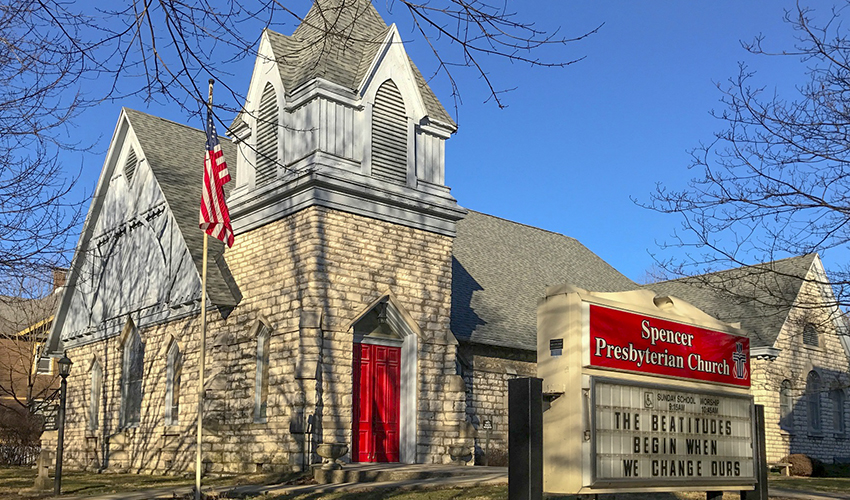 With grants from our Sacred Places program, Spencer Presbyterian Church, built in 1879, is forging a stronger future. (Photo: Rose Wernicke)

“We have begun addressing those items,” notes Sylvia Dyar, a member of the congregation that received the Sacred Places training. “Number One on the list was electrical needs. The report scared our members and spurred them to address that issue at once. It confirmed some issues we knew about and highlighted items we were not aware of. The congregation has begun to step up and get enthused about this restoration which ties into our sesquicentennial celebration in 2020,” Dyar notes. In the past year, the church received a $25,000 grant from Sacred Places Indiana to seed its building fund.

Sacred Places Indiana awarded $137,500 in grants in the past fiscal year to help the participating churches with repairs, fundraising planning, and architectural studies. Renewed for 2019, Sacred Places Indiana will soon select congregations to participate in the program’s fourth year. Indiana Landmarks looks forward to equipping more congregations with the tools they need to continue to revitalize historic churches across the state.