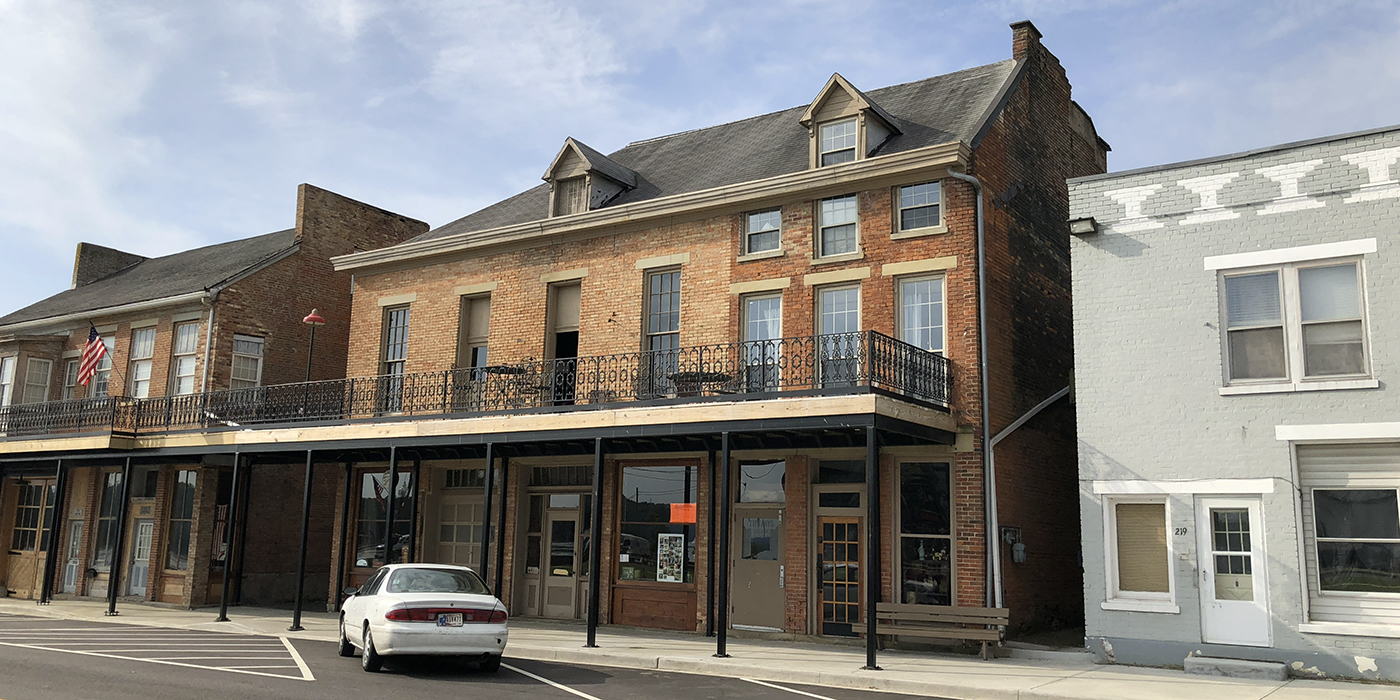 Roam along the River

Located along a bend in the Ohio River in southeast Indiana, Aurora grew in the early 1800s as a river port, favored for its strategic location for shipping goods between Cincinnati and Louisville. As the city celebrates its bicentennial in 2019, Indiana Landmarks, Dearborn County Historical Society, and Aurora Main Street partner to present a Historic Downtown Aurora Tour on October 19, showcasing landmarks from the city’s history.

Aurora’s National-Register listed historic district spans 25 blocks of nineteenth- and twentieth-century buildings. Hit hard by the recession, Aurora’s Second Street has seen a wealth of private and public investment in recent years. The downtown’s future looks bright, and locals want to show it off.

“Aurora is a great place to spend the day during our tour. You can see amazing historic buildings, grab an ice cream, do some vintage and antique shopping, have lunch, and even finish off the day with a locally brewed beer!” says Jarrad Holbrook, director of Indiana Landmarks’ Southeast Field Office and an Aurora resident. 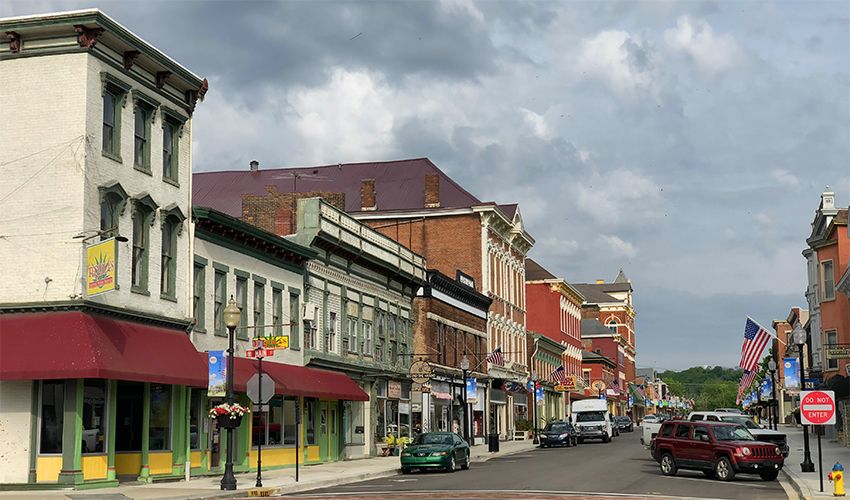 An all-volunteer group is spearheading creation of the Ohio River Recreation Trail, encouraging exploration in river communities in Ohio, Indiana, and Kentucky. The trail builds on existing efforts by cities including Aurora (above), which uses the riverfront as an attraction to draw visitors to its historic downtown. (Photo: Jarrad Holbrook) 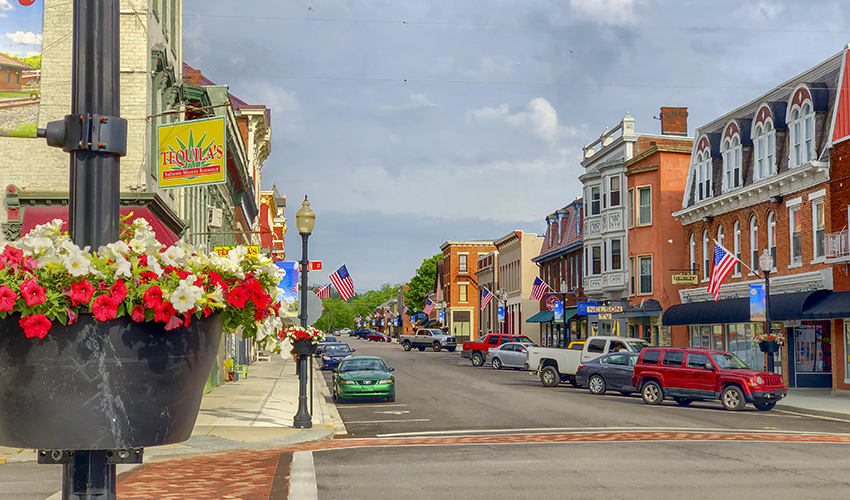 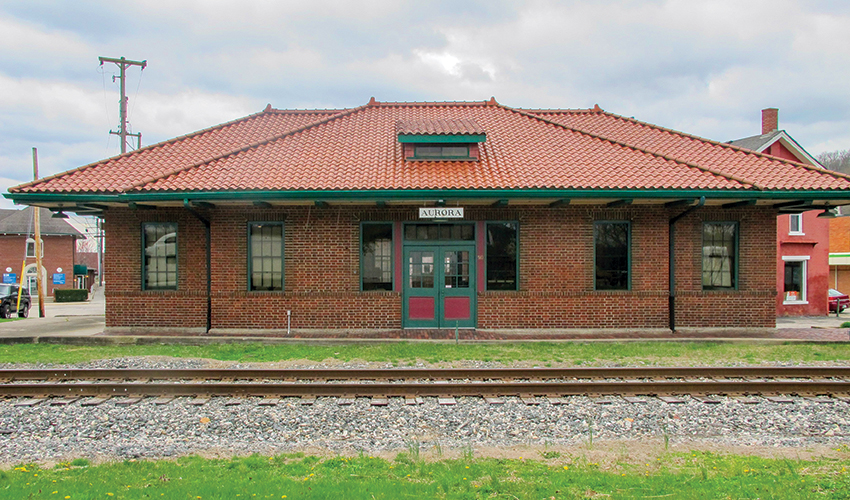 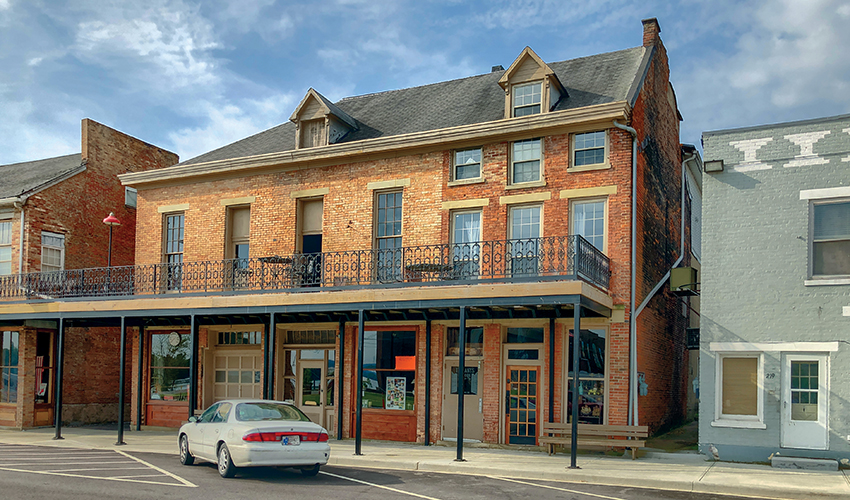 Tourgoers can take a peek at a restoration-in-progress at 211 Second Street, now being renovated for a steak house, bar, and venue for live music. 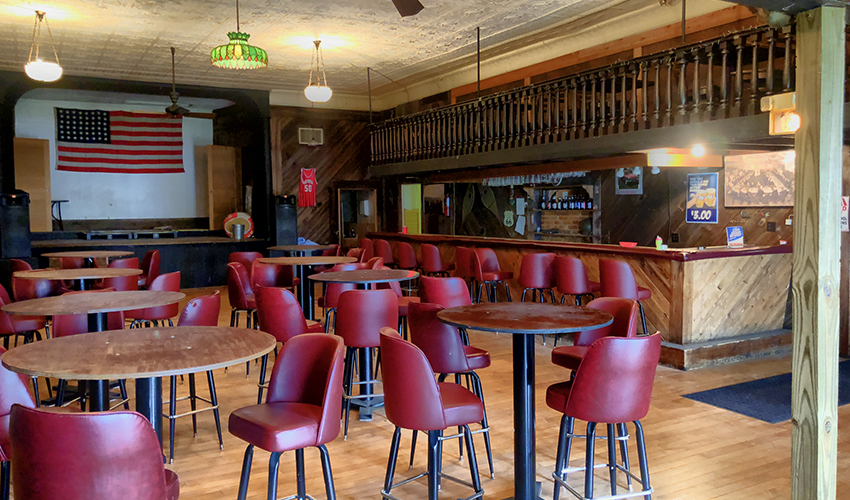 Tourgoers can take a peek at a restoration-in-progress at 211 Second Street, now being renovated for a steak house, bar, and venue for live music.
Previous Next

Jarrad is opening his home, the David and Jennie Stapp House at 306 Fourth Street, for the tour. Built in 1883, the house is an unusual combination of Italianate and Moorish Revival styles, with an ogee arch over the front entrance, floral window surrounds, and an elaborate iron fence. The simple hip-roof cap on the front tower replaced an original, more elaborate crown that burned years ago.

The tour highlights another private home—this one unusual in a different way—just blocks away at 216 Judiciary Street, where two arched entries hint at the 1878 building’s history as a livery stable. In adapting the property as her residence, Leisa Burns created a modern living space on the second floor and adapted the first floor for parking and storage.

Aurora boomed as a transportation hub once the railroad came through in 1859. Though it sold its last ticket in 1971, Aurora’s Baltimore and Ohio Southwest Railroad Passenger Station on Second Street still looks like it could be waiting for the next train. The Craftsman-style depot still has its original ticket window and double doors. Since 2012, the building has housed Aurora’s Local History Library. Step inside to see its collection of periodicals dating to 1836, family histories, census records, and local history books. 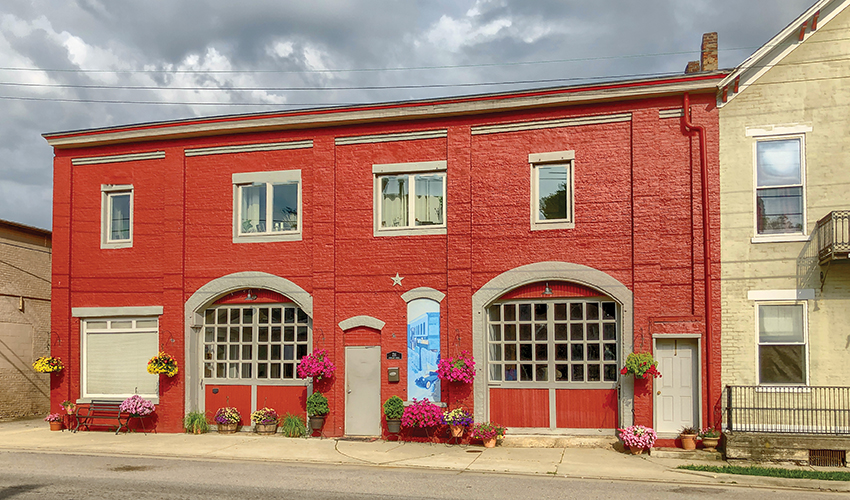 One of the private homes featured on the tour is located in a historic livery stable on Judiciary Street. 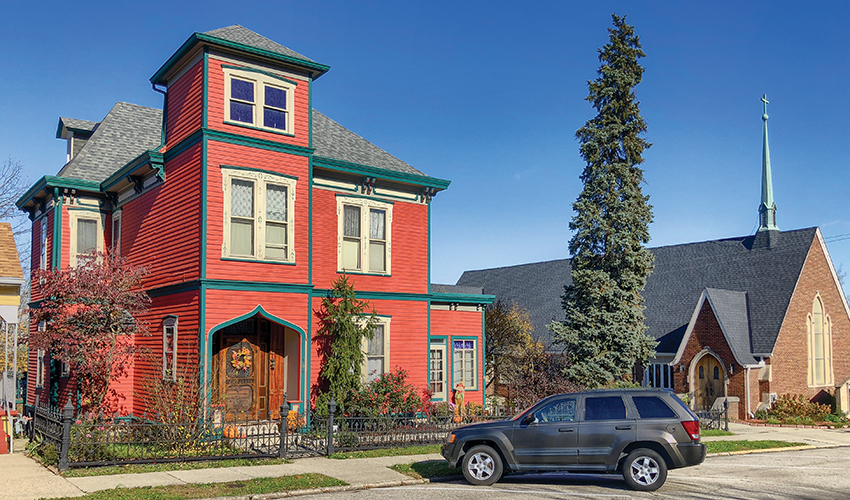 Jarrad Holbrook, director of our Southeast Field Office, opens his home, located in the historic David and Jennie Stapp House, for the tour on October 19. 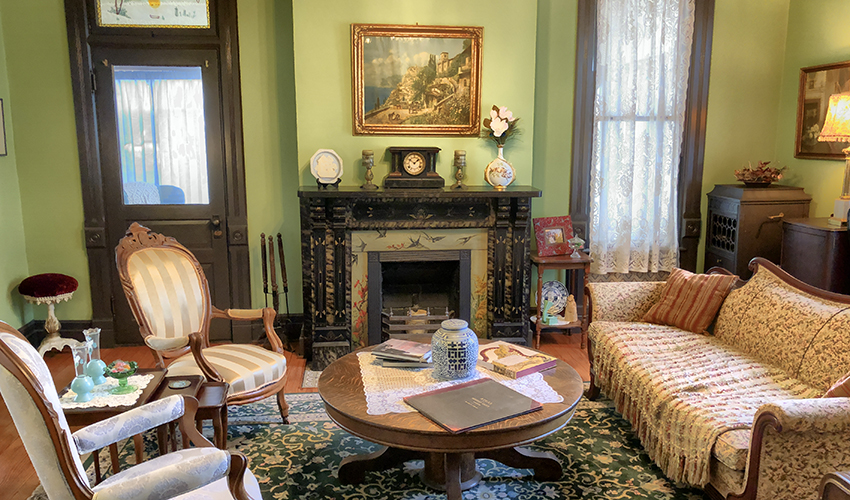 Jarrad Holbrook, director of our Southeast Field Office, opens his home, located in the historic David and Jennie Stapp House, for the tour on October 19.
Previous Next

See a restoration in progress at 211 Second Street, where Tim Miller is repurposing the Federal-style brick building at as a steakhouse, bar, and venue for live music. Built c.1860 as a lodge for the Improved Order of Red Men, the building’s decorative wrought iron balcony offers perfect views of the nearby Ohio River. Proximity to the river means great views, but it also means occasional flooding. Rather than fight nature, Tim is removing water-damaged plaster and taking the walls back to original brick.

The tour also offers a peek at Great Crescent Brewery, which takes its name, location, and even some of its specialty recipes from Aurora’s long tradition of brewing and distilling. The business started as the home-brewing hobby of Dan and Lani Valas. Their pastime morphed into a full-fledged craft brewery operating out of a rehabilitated 1843 brick building at 315 Importing Street, once part of the original Gaff Distillery. The tap room features exposed brick, timber beams, and a vintage Art Deco bar rescued from a barn. Brewing takes place in a 10-barrel production facility behind the taproom.

During the tour, take a moment to rest and reflect at the 1850 Greek Revival-style First Presbyterian Church at the corner of Main and Fourth streets. Built on a sloping hill, the church’s prominent location inspired civic leaders to incorporate Aurora’s first town clock into the tower. Inside the church, you’ll see original pews, historic chandeliers, and a c.1905 pipe organ.

On the day of the tour, tourgoers can check in at the National Register-listed City Building at 216 Third Street. Built in 1886 in a mix of Italianate and Romanesque styles, the landmark includes a triangular artistic ornament at the roofline with rays representing an aurora, the first light of dawn. The building has served city business since its construction, renovated and expanded in 2004-2005.

Tickets for the Historic Downtown Aurora Tour on October 19 cost $12 for Indiana Landmarks members and $15 for the general public in advance, $20 per person on the day of the tour. You can purchase tickets in advance at 317-639-4534 or online at downtownauroratour19.eventbrite.com.