When you can browse antiques while drinking glass-bottled soda or slurping hand-dipped ice cream, you’ve got a winning combination. At least, that’s the idea that inspired Adam and Rebecca Hanson to create Antiqology in Huntington. And if it could be part of the city’s downtown revival, so much the better.

In 2012, the Hansons operated an online business out of their turn-of-the-century historic home in Huntington’s Old Plat neighborhood, serving clients in 70 countries. Though the business was successful, they longed to be move involved in improving Adam’s hometown, where the couple met while volunteering with a local church youth group.

“We said we cared about the community and wanted to see downtown revitalized but hadn’t put any action behind those words,” says Adam. “I sat behind my computer all day and didn’t interact with my community at all.”

The Hansons started brainstorming about new businesses that could be a draw in downtown. In furnishing their historic home, they’d become familiar with buying antiques, soon building up an excess of “finds.” When 400 people showed up to a “porch sale” at their home, they figured they were onto something. They hit on the idea of a shop that would be part antiques store and part ice cream parlor, with a collection of small-batch, hand-crafted sodas thrown in. They pitched their concept to the Huntington County Visitor Bureau, which was running a contest for a new business to occupy the empty 1885 Lewis Block at the corner of Jefferson and Market streets. They won the contest and free rent for a year, embarking on six months of renovations before opening Antiqology. 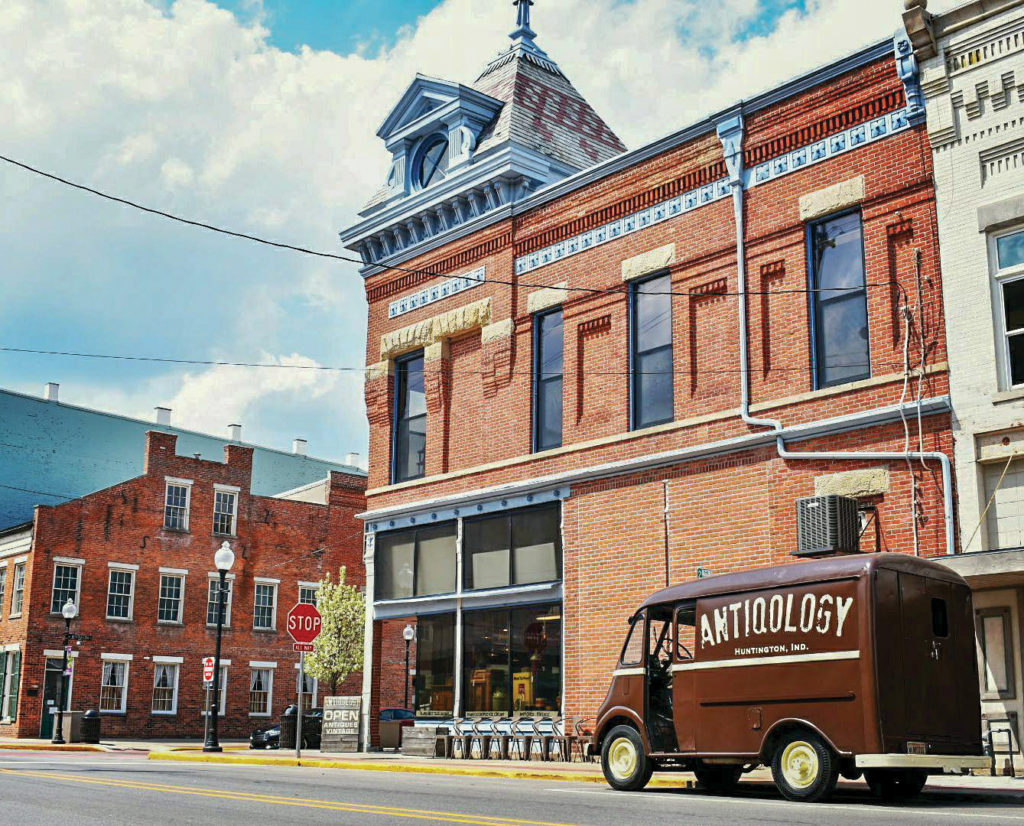 The building had been empty for a decade when the Hansons began refurbishing it. Eye-catching even in its vacant state, the landmark retained original tin ceilings and a corner cupola with metal finial and circular windows. Signatures from previous generations still marked the walls of the cupola, rumored to have past connections as a speakeasy. The Hansons exposed brick walls and dug down to the original hardwood floors. “They were buried under fourteen layers of nonsense,” recalls Adam. “Who tiles over carpet?”

Opened in 2013, Antiqology carries both antiques and vintage-inspired goods, with a large collection of newer Fiestaware. Fourteen ice cream flavors—available in scoops, shakes, and to-go quarts—change from week to week as supplies last. More than 750 varieties of glass-bottled sodas line the walls, including Antiqology’s own much-sought-after root beer. “We’re a modern twist on an old general store,” says Adam.

Initially, their foray into craft sodas was an experiment they figured just fit with the store’s vibe, but it quickly became their calling card, leading them to offer what they describe as one of the largest selections of craft soda in the Midwest, including birch and ginger beers, cherry, citrus, orange, grape and cream sodas, root beers and sarsaparilla, and seasonal varieties. In fact, the soda business boomed so much that it went mobile: the Hansons hunted until they found a 1960 International Metro, an on-the-go soda van they outfitted to sell their wares at special events across northeast Indiana. 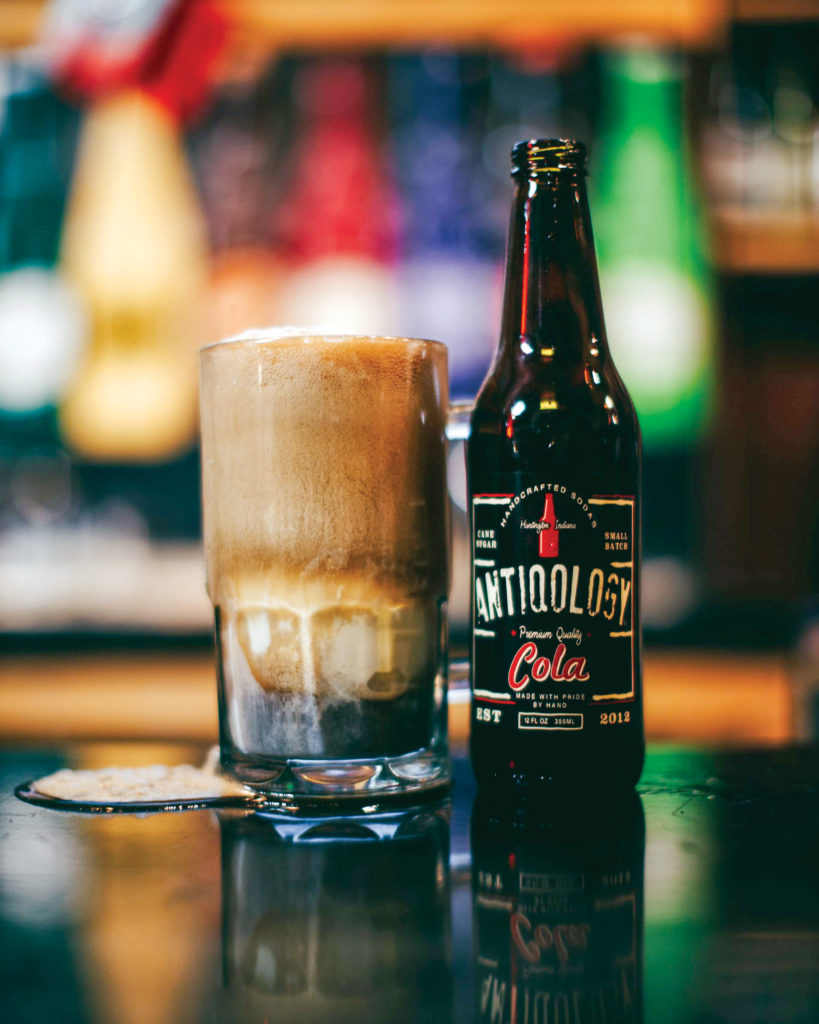 Their interest in seeing Huntington flourish led Rebecca to serve as president of the downtown business association for several years and motivated the Hansons to purchase two other historic downtown commercial buildings, which they currently lease. In May 2018, the couple bought a third downtown building, the Huntington Theater, with plans to adapt the 1904 landmark to house various businesses along with a bottling line for Antiqology’s locally produced craft soda. But just one month after they purchased the property, tragedy struck when a semi-trailer crashed into the front of the building, hitting the theater’s 1940s Art Deco-style marquee. They’ve sent the marquee to an Ohio-based sign company for repairs, but much of their planned restoration at the site is on hold as they await a court settlement on the damages.

Despite the setback, the Hansons are hopeful that downtown Huntington will continue to thrive and see its historic buildings as a key ingredient in the success of their business. “Ultimately our business model is that we sell an experience where the way that things appear is very important,” says Adam. “When you walk into our shop, it tells a story, and connects people to a sense of nostalgia.” 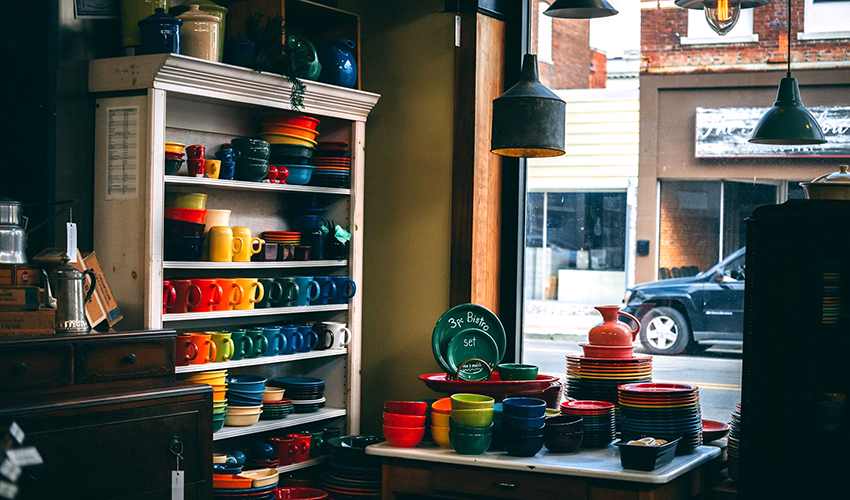 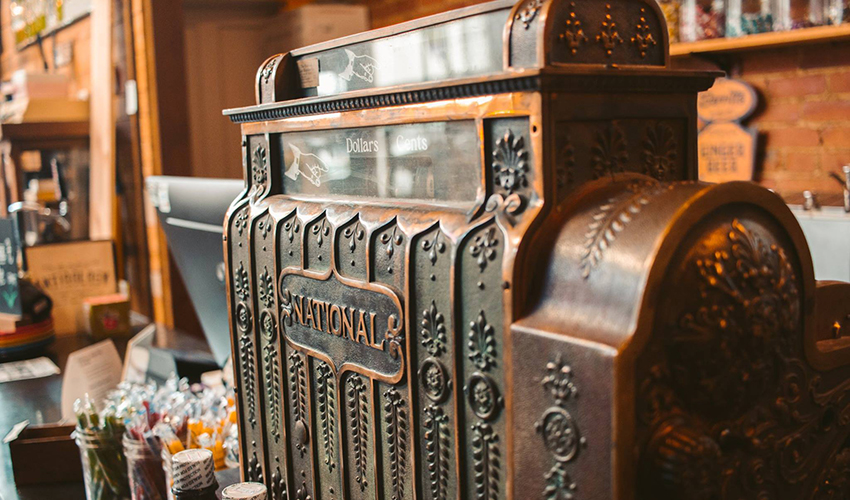 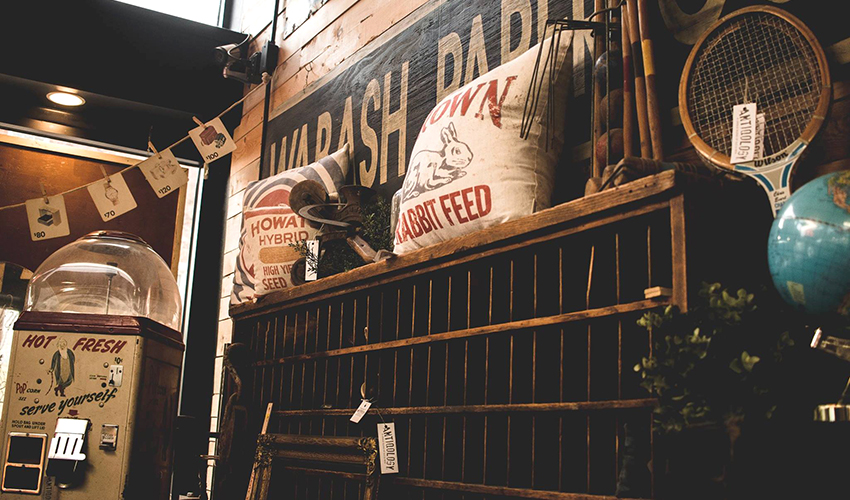 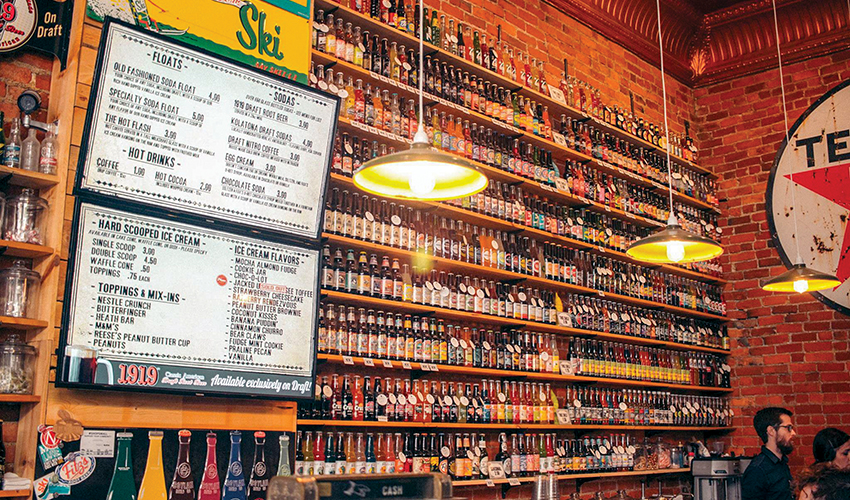