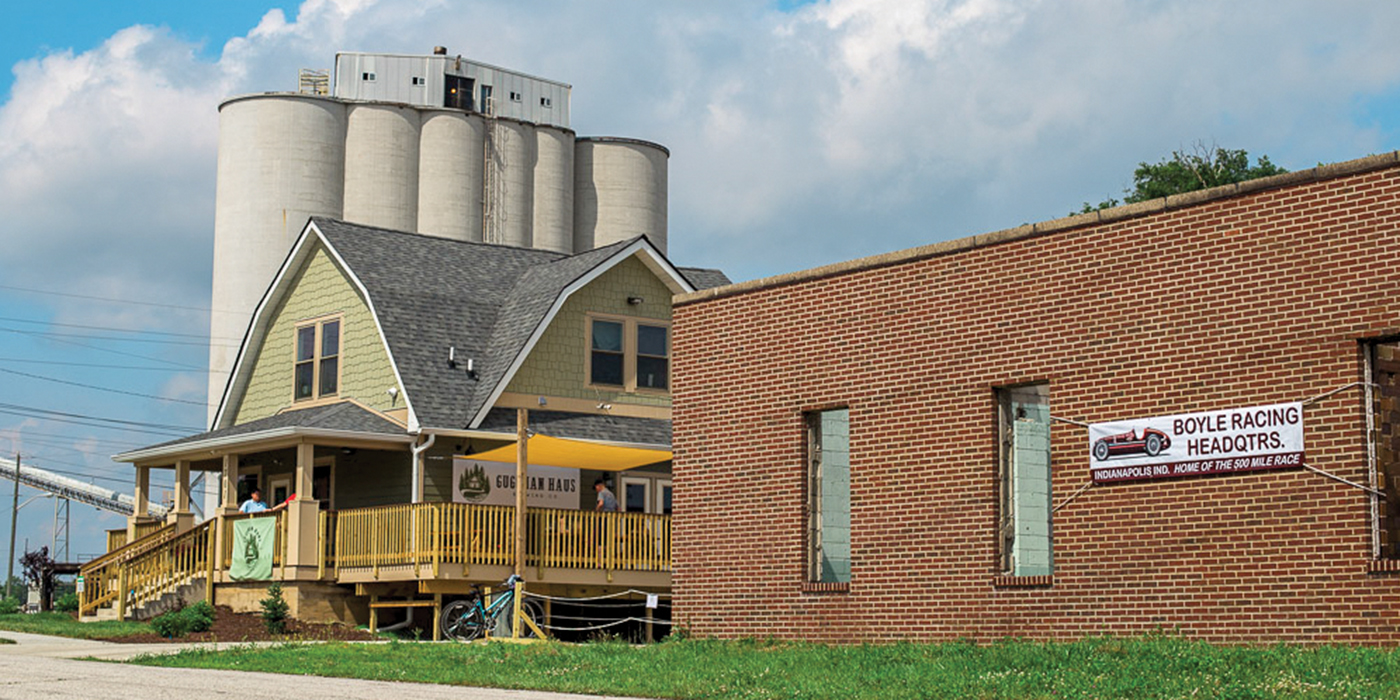 In 1935, an industrial building at 1701 Gent Avenue on Indianapolis’s west side became home to several of the city’s premier racing teams, including one led by “Umbrella Mike” Boyle, a Chicago labor leader whose success in the Indy 500 led Indianapolis Motor Speedway Historian Donald Davidson to dub him the “Penske of the pre-War era.”

In recent years, however, the building tottered on the brink of collapse, along with a neighboring 1916 Dutch Colonial Revival-style house. This spring marked a turnaround for the site, rehabbed and reborn as Guggman Haus Brewing Co.

Just a few years ago, when city officials targeted the industrial building for demolition, members of our Indiana Automotive affinity group appealed to have the structure pulled from the demolition list and turned over to Indiana Landmarks. In turn, we passed the former garage on to Boyle Racing LLC, a nonprofit several Indiana Automotive board members formed to salvage as much as possible of the building. 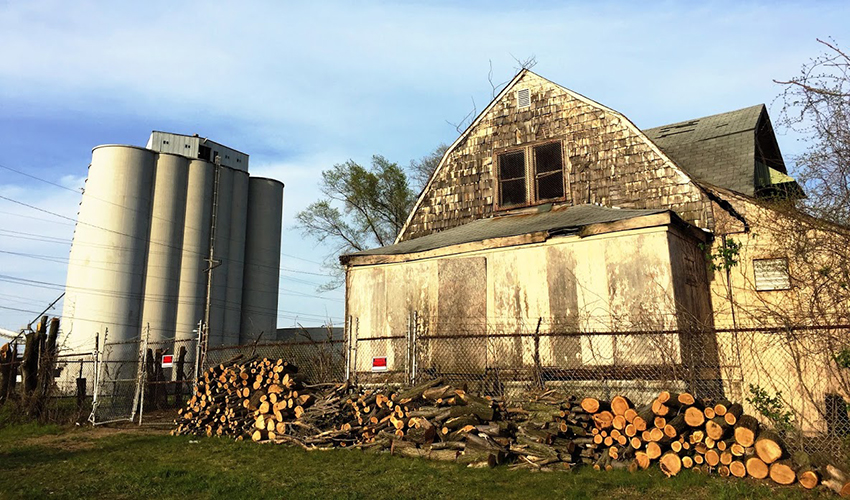 Vacant for more than a decade, the historic house rehabbed for Guggman Haus needed extensive work. 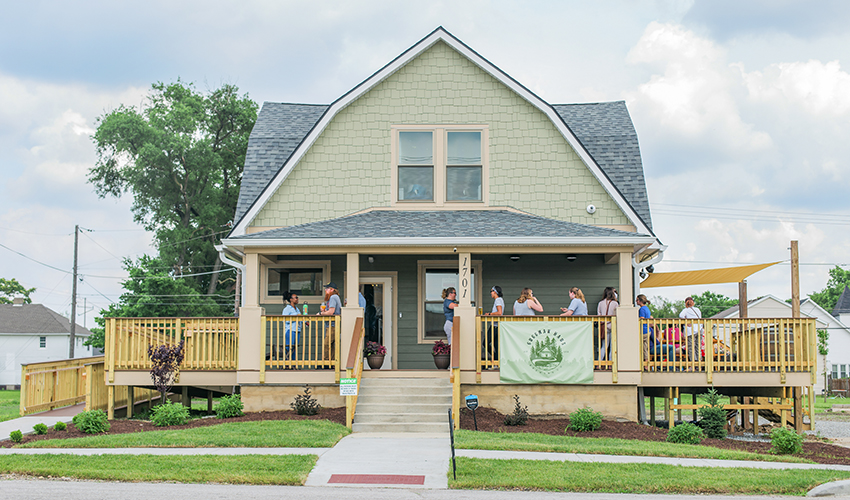 Workers repaired the roof, adding fresh paint and a wrap-around deck on the exterior with picnic tables for outdoor seating. 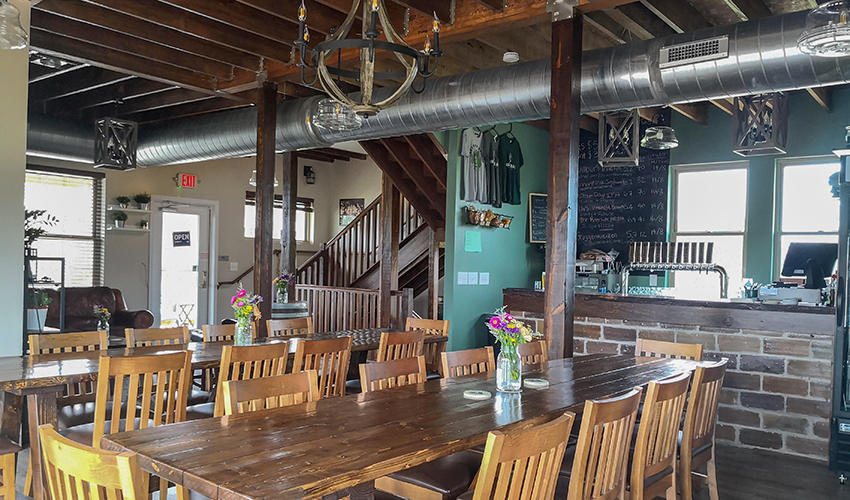 The main floor is a tasting room, complete with a bar forged from glazed block salvaged from the nearby garage. 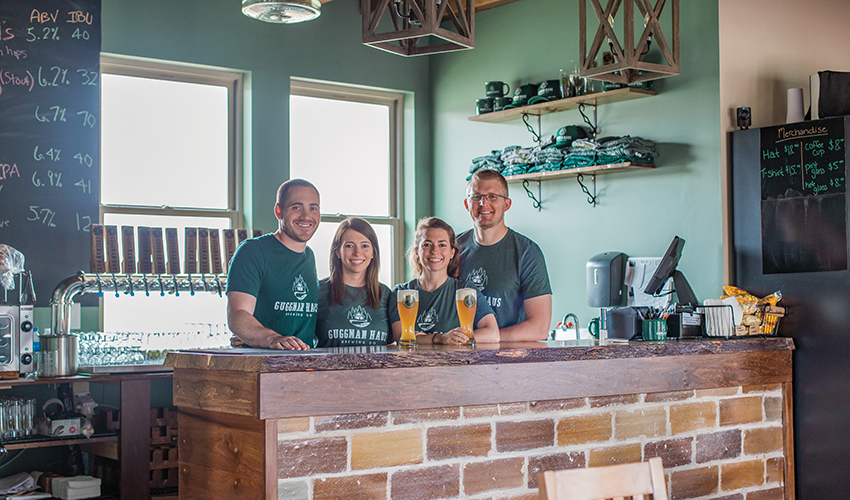 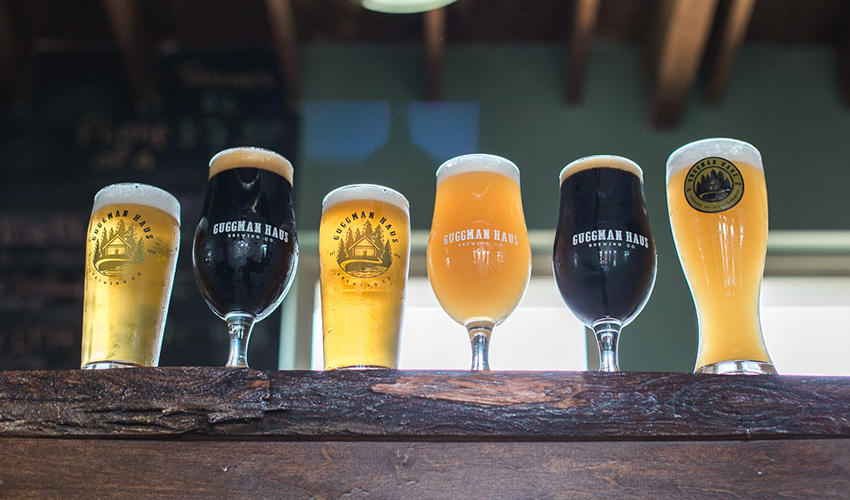 While scouting in 2015 for a business to occupy the property, Boyle Racing Treasurer Jeffrey Congdon and Vice President John Pappas came across Guggman Haus Brewing Company, a Broad Ripple-based home-brewing venture started by twin sisters Courtney Guggenberger and Abby Gorman and their husbands, Derek and Ryan. When it became clear that renovations on the former garage would take longer than expected, the group focused its rehab efforts on the house next door, vacant for more than a decade. “The house looked like it had been through World War II,” says Congdon.

Workers repaired the roof, adding fresh paint and a wrap-around deck on the exterior with picnic tables for outdoor seating. Few original features remained inside, so the team gutted and rehabbed it to a cabin atmosphere, with couches, board games, and wooden tables and chairs. The lower level houses brewing operations and limited seating, while the main floor is a tasting room, complete with a bar forged from glazed block salvaged from the nearby garage. The Guggenbergers and Gormans provided sweat equity and advised on the design.

When the garage’s renovation is complete, it will house Guggman Haus’s expanded taproom and event space, along with memorabilia and vintage cars, including the Boyle Diamond T 211FF Race Car Hauler recovered and restored by Boyle Racing. The race car hauler and a Boyle Special race car will be on display on October 19 during Boyle Racing Day at Guggman Haus. Watch @GuggmanHausBrewing on Facebook for upcoming details.