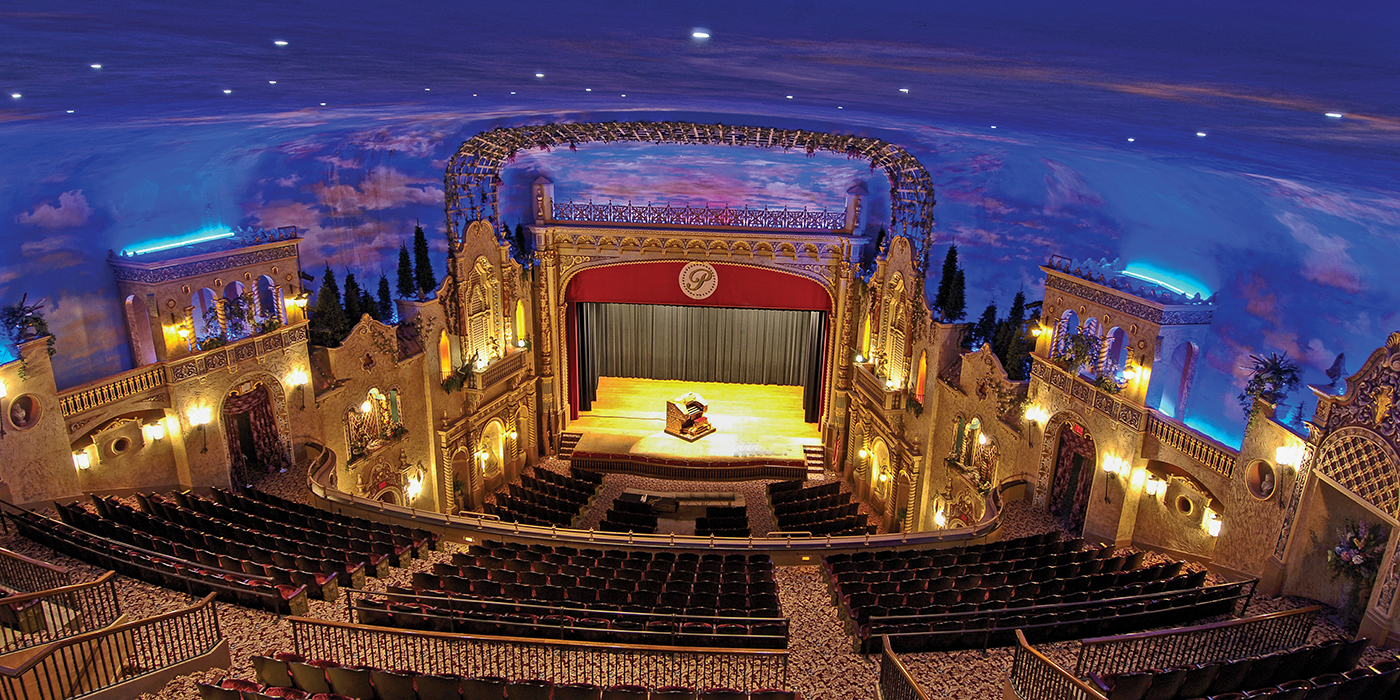 You’re sitting in a balcony overlooking an Italian garden dotted with statues of Roman goddesses, bubbling fountains, and birds poised to take flight. Lightning flashes across the sky, but you don’t fear rain. You’re inside, after all, and the storm clouds are just a special effect projected on the ceiling. Such is the magic of atmospheric theaters—grand movie palaces designed to transport audiences away from the cares of everyday life. 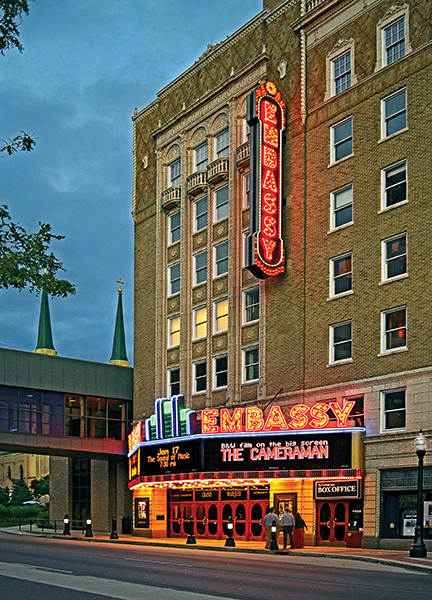 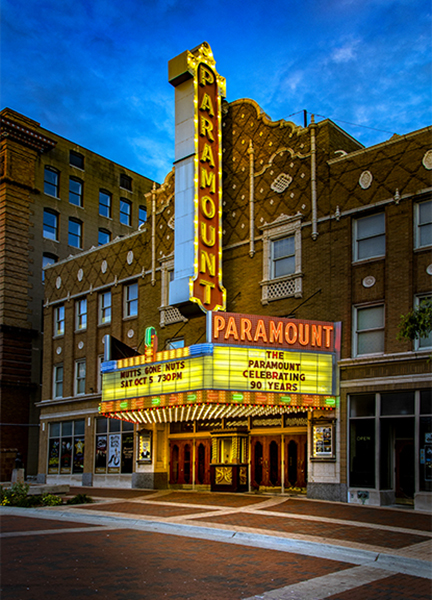 Trained as an electrical engineer, Eberson began designing theaters in the ’teens, mainly in the South and Midwest, promoting his designs with the alliterative slogan, “Prepare Practical Plans for Pretty Playhouses – Please Patrons – Pay Profits.” Eberson’s five Indiana commissions illustrate the evolution of his work.

In 1915, Terre Haute theater operator Theodore Barhydt hired Eberson to create an eclectic Neoclassical Revival design for the Hippodrome Theater. A vaudeville venue at the corner of Eighth and Ohio streets, the Hippodrome became a community theater and movie house, and, in 1955, a Scottish Rite Cathedral.

After selling the Hippodrome, Barhydt hired Eberson again to design the Indiana Theatre, a vaudeville and silent movie house he opened in 1922 just a block away from the Hippodrome. It was here that Eberson began experimenting with elements that would come to define his atmospheric work, including stylized motifs and lighting to simulate different times of day. For the Indiana, Eberson employed a Spanish theme, with ornate plasterwork inside and out, a two-and-a-half story entry rotunda, terra cotta ornament, mosaic floors, and hand-carved sculptures. The theater was renovated in 2013 to serve as an event venue. 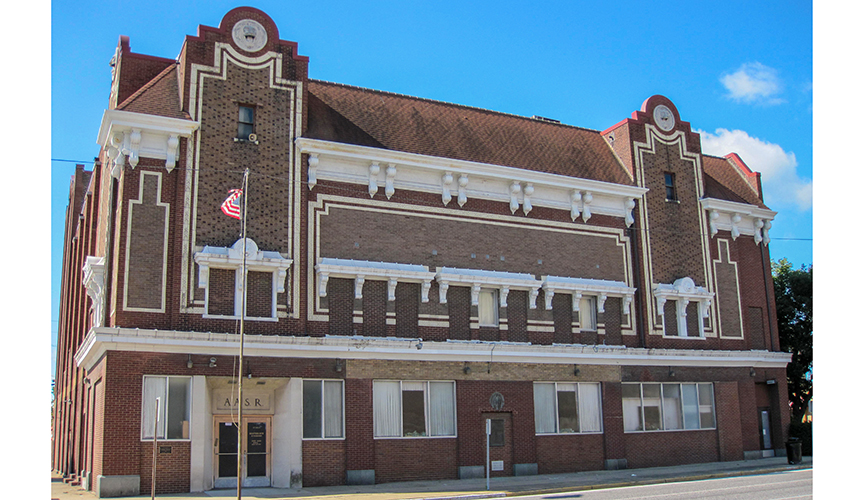 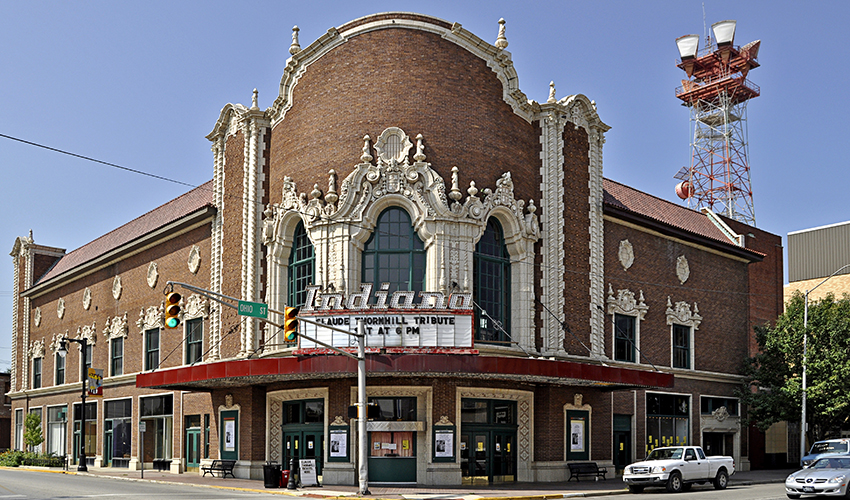 Just a block away from the Hippodrome Theatre, the John Eberson-designed Indiana Theatre serves as an event venue. It was here that Eberson began experimenting with elements that would define his atmospheric work. (Photo by Lee Lewellen) 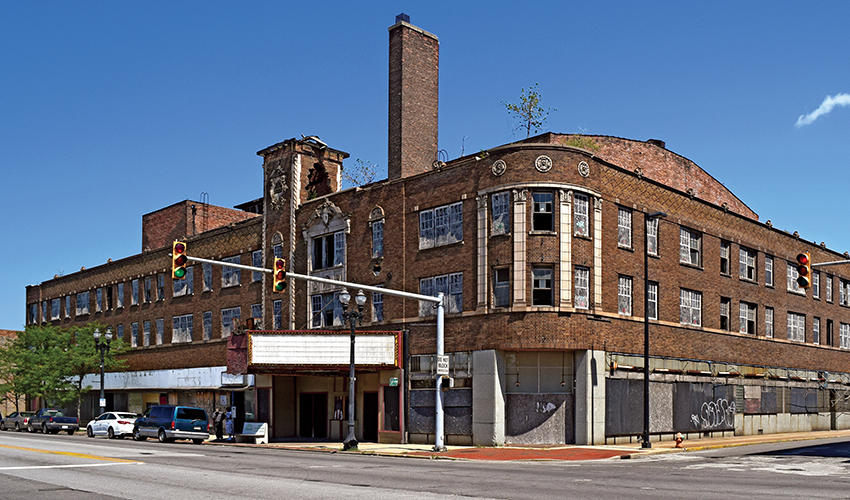 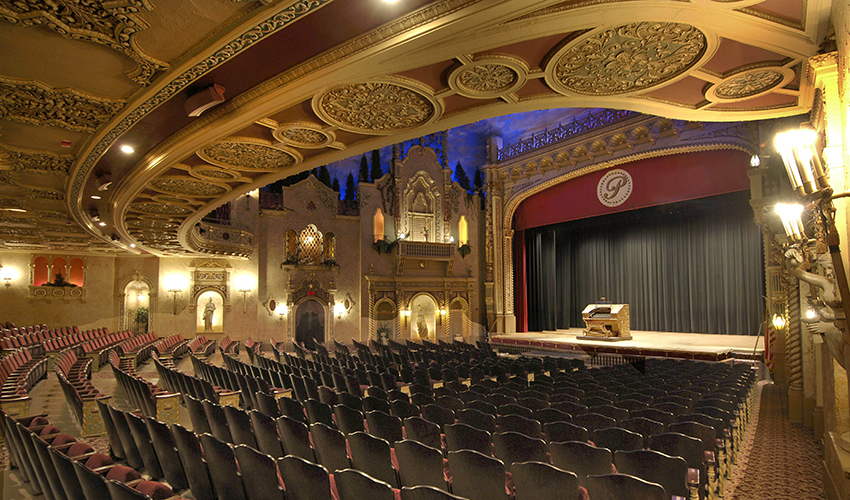 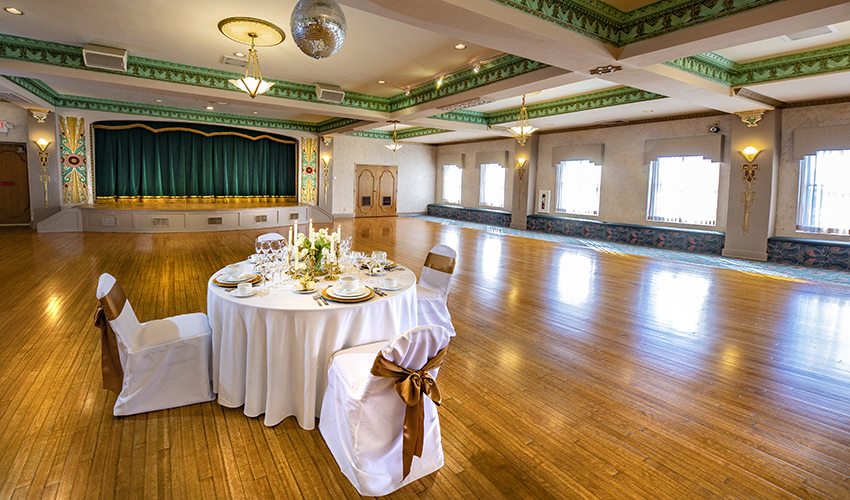 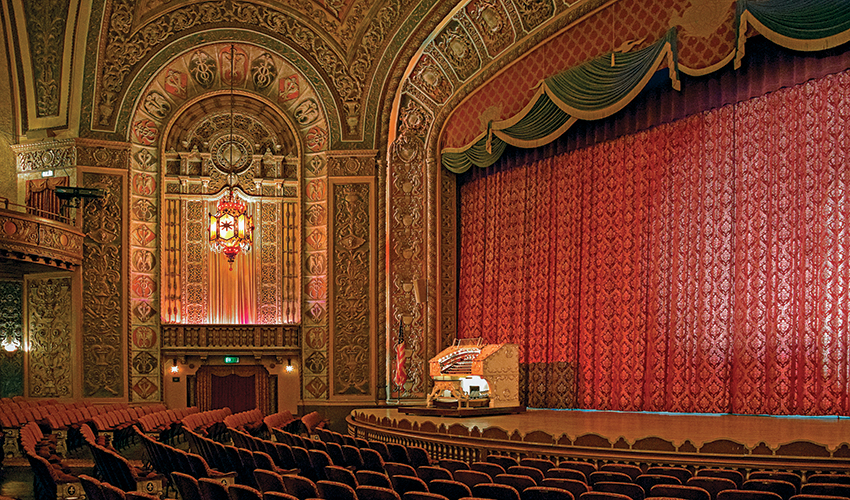 Though it's not one of his atmospheric designs, the Eberson-designed interior of the Embassy Theatre in Fort Wayne is still a visual treat. (Photo: Lee Lewellen) 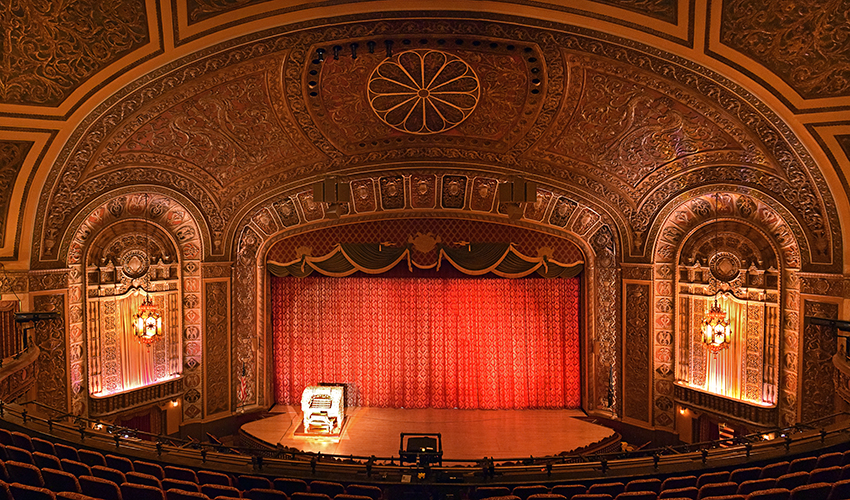 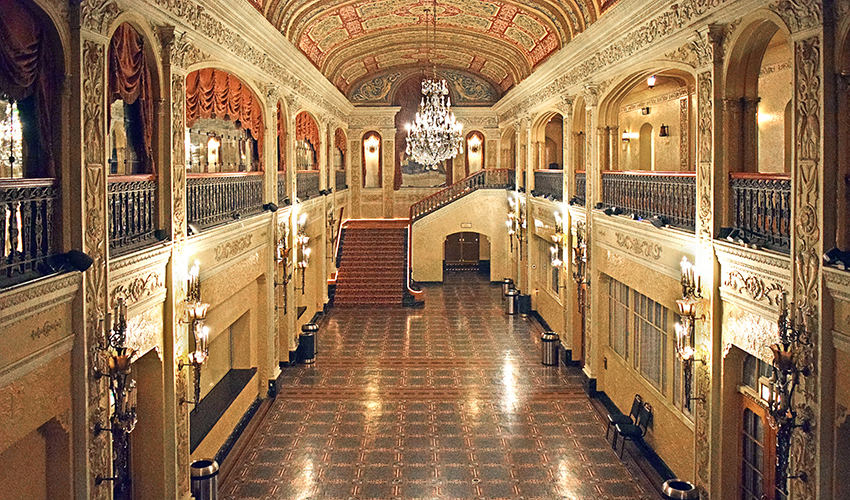 Eberson considered the 1923 Hoblitzell Majestic Theatre in Houston, Texas, his first fully atmospheric design. Two years later, Gary’s Palace Theater opened to fanfare and accolades, becoming Eberson’s first fully atmospheric theater in Indiana. In his design for the Palace, Eberson pulled out the stops, incorporating ornate light fixtures, velvet draperies, statuary, and fountains intended to suggest a European courtyard under a blue sky. A light show on the ceiling before films simulated sunrise and sunset. After the theater closed its doors in 1972, a succession of short-lived and ill-fated uses hastened the building’s downward spiral. Years of vacancy have left the once-grand theater in dire straits.

Two of Eberson’s most exuberant Indiana designs thrive today as events venues: Fort Wayne’s Embassy Theatre and Anderson’s Paramount Theatre. Fort Wayne architect A.M. Strauss and Eberson joined forces on the originally named Emboyd, a vaudeville and movie house opened in 1928 along with the adjoining Indiana Hotel. Though it’s not one of his atmospheric designs, Eberson employed terra cotta, Italian mosaic floors, and ornate molded plaster embellishments to create a visual feast in the lobby and theater. In the 1970s, community leaders and volunteers formed the Embassy Theatre Foundation and raised $250,000 to spare the theater from demolition, kicking off its renovation. One of the Embassy’s most popular events, a Festival of Trees, draws thousands and serves as the theater’s largest annual fundraiser, supporting its ongoing operation and restoration. 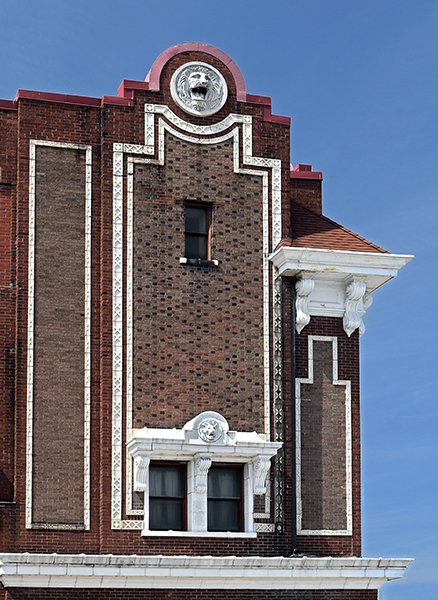 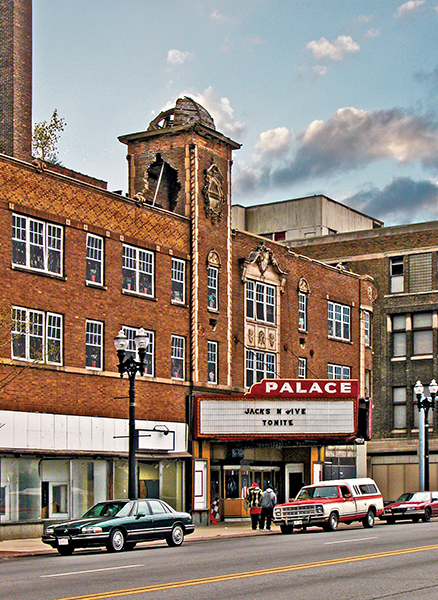 Of the roughly 100 atmospheric theaters Eberson designed in the U.S. and Canada, the Paramount in Anderson is a rare survivor. Another collaboration between the designer and architect A.M. Strauss, the theater’s interior evokes a Spanish courtyard underneath a twinkling starry sky, with flower-covered trellises, birds, and statues of Greek and Roman goddesses. It narrowly escaped the wrecking ball in 1989 after sitting empty for five years. Rescued by the Paramount Heritage Foundation and reopened in 1995, the Paramount hosts concerts, big band shows, live performances, symphony, ballet, dance recitals and ballroom dances. Recent renovations of the ballroom and marquee have made the theater shine even brighter. “We don’t have a lot of bells and whistles, just a lot of beauty and history,” says Randy Hammel, executive director. “When we have visitors, I take them on the WOW tour. People walk in the theater, see the architecture and stars in the sky, and say, ‘WOW!’”

As the 1930s advanced, atmospheric theaters went out of fashion, supplanted by more streamlined, modern designs and the deepening Depression. But visiting one of these rare survivors still holds the power to carry you to another time and place, exactly as Eberson intended.