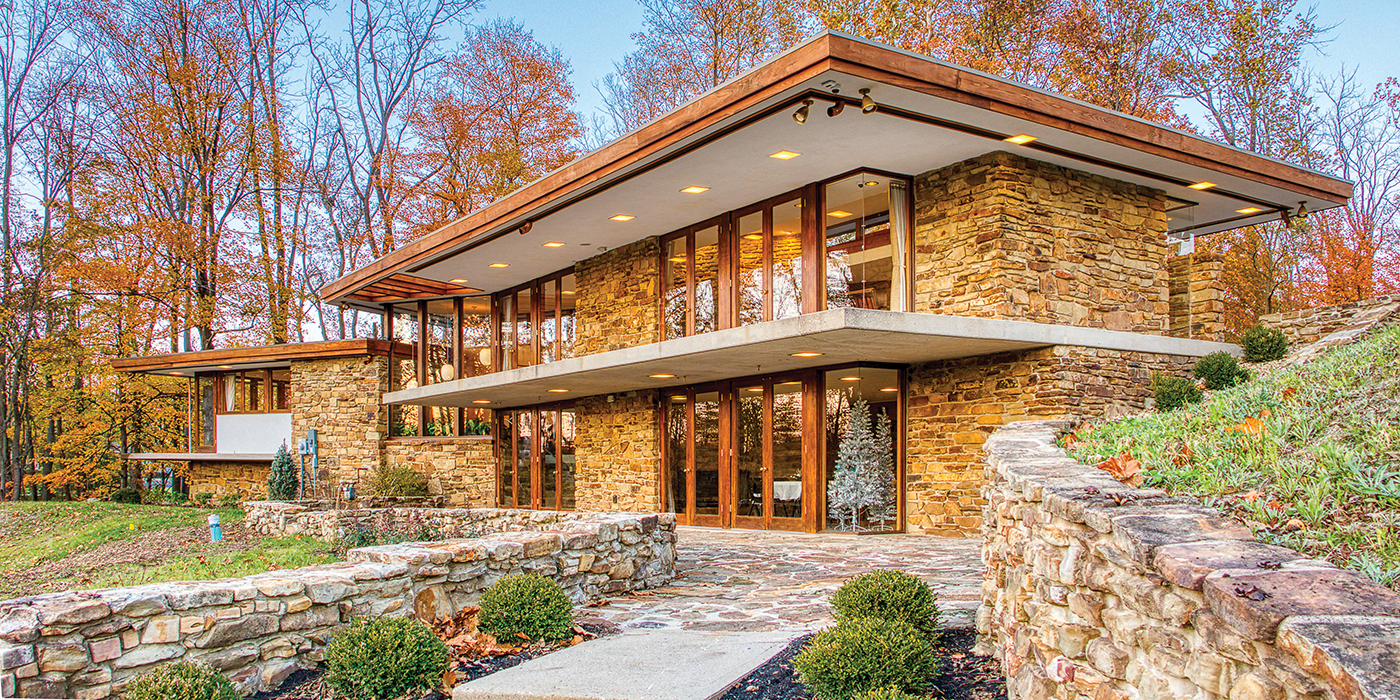 Photo: Vacancy and deterioration landed Greenwood's Mills House on Indiana Landmarks' 10 Most Endangered list in 2014, and for years we pressed for a preservation-minded buyer who could ensure the home's future. The property finally found its savior in Greenwood native Todd Anthony, who embarked on a year-long renovation in 2018. (Photo: Jason Wetherholt, JWcreative.indy)
POSTED ON January 9, 2020 BY Indiana Landmarks | Endangered Places, Modern Landmarks, News, Saved

Along Greenwood’s busy Fry Road, the Mills House has been a standout since its construction in 1956, a Wrightian-inspired residence of glass and fieldstone. By 2014, however, the vacant house stood out for all the wrong reasons, its neglected state landing the property on Indiana Landmarks’ 10 Most Endangered list. Saved in the nick of time by Greenwood native Todd Anthony, the Mills House is capturing attention again following a year-long renovation.

In 1954, Ernie Mills, owner of the Monarch Cabinet Company, bought a wooded site on a large lot to build a house for use as his family home and a showcase for his company’s cabinets and countertops. A fan of Frank Lloyd Wright’s work, Mills found the right local partner in Indianapolis architect Harry Cooler, who had studied under Wright while attending the University of Illinois.

Cooler’s design for the tri-level house brought the outside in through expanses of glass and natural materials. At Mills’ request, Cooler incorporated cutting-edge technologies, including air conditioning and copper tubing to supply radiant heat in the terrazzo floors, as well as samples of his company’s work.

After the Mills family moved out, the property eventually became a law firm, then fell into disrepair. In driving by the house in December 2018, Todd Anthony, owner of online business DiscountFilters, saw a “For Sale” sign in the yard. He started making phone calls, and within a few days he owned the Mills House. “It was in such a state of disrepair that anyone with common sense wouldn’t have gotten involved,” Anthony jokes. “I’ve had a very successful career. The city’s been very good to me and our business, and this was a kind of way to give back. I just had to do it. I didn’t even have a business plan in place when I bought it.”

Anthony, who is passionate about mid-century architecture, finally got a clear vision for the property while visiting Frank Sinatra’s home, now an event center in Palm Springs. He decided to rent the Mills House for small meetings and business retreats, rechristening it the Harry Cooler Conference Center in honor of its architect.

Though the house was structurally sound, water pooling on the flat roof created holes that left the property open to the elements and animals. Anthony banished the critters and put on a temporary roof before assessing what could be saved. To bring back Cooler’s design, he brought in Harry’s son, architect Bill Cooler. 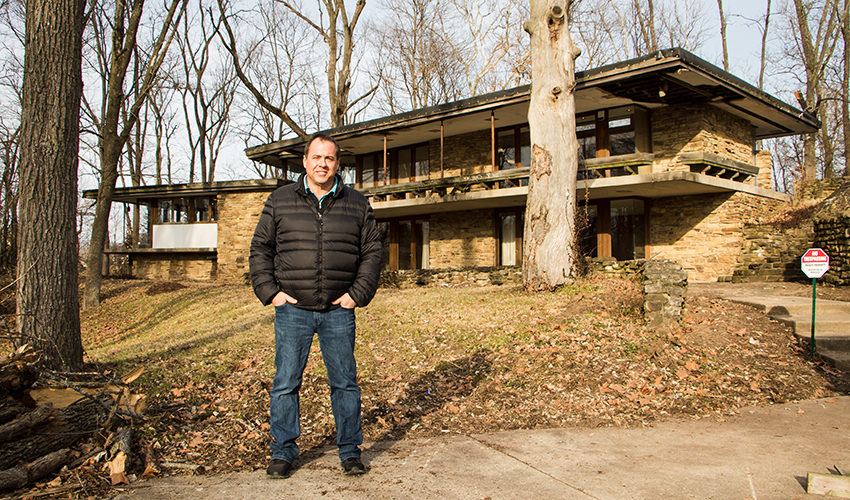 A fan of Mid-Century Modern architecture, Todd Anthony couldn't resist buying the Mills House in December 2018. He saw the opportunity to transform the property as a way to give back to the community. (Photo: Jason Wetherholt) 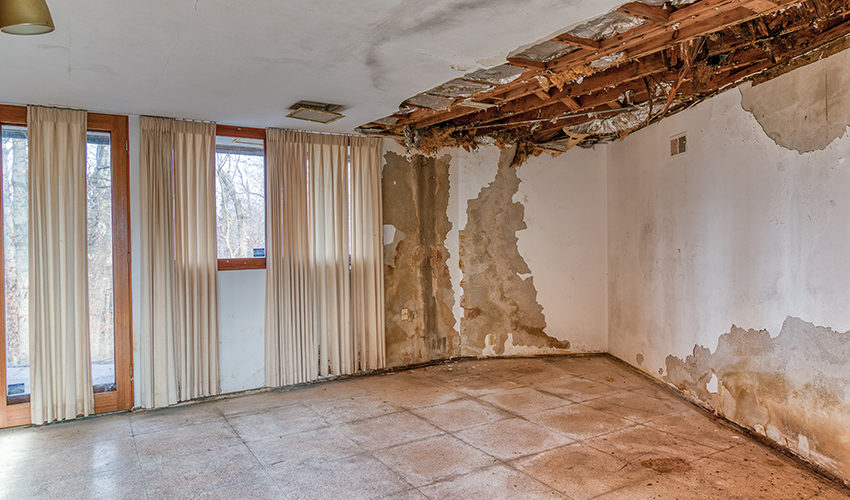 A leaky roof exposed the Mills House to the elements, accelerating decline inside. (Photo: Jason Wetherholt) 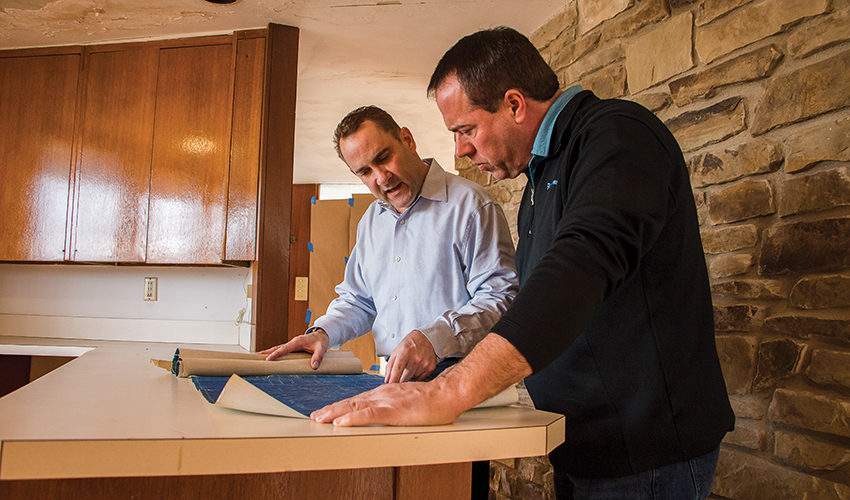 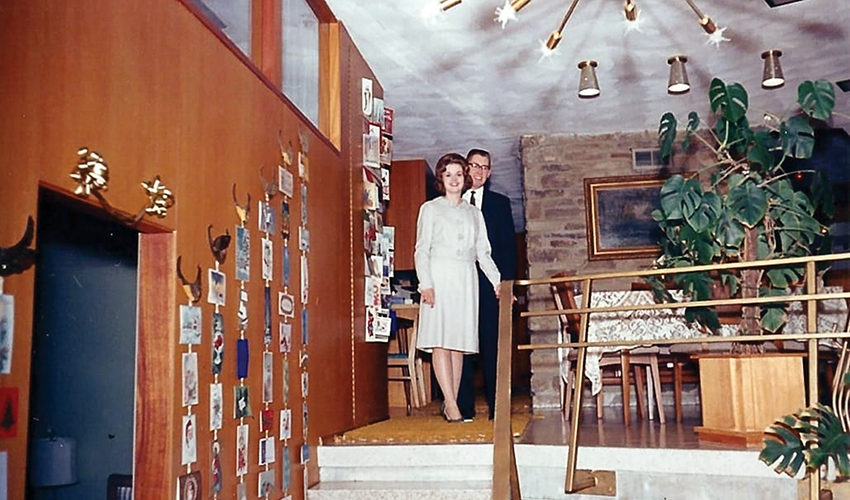 In transforming the house to an event center, Anthony prioritized saving original details such as pendant lights and a built-in planter. (Photo: Jason Wetherholt) 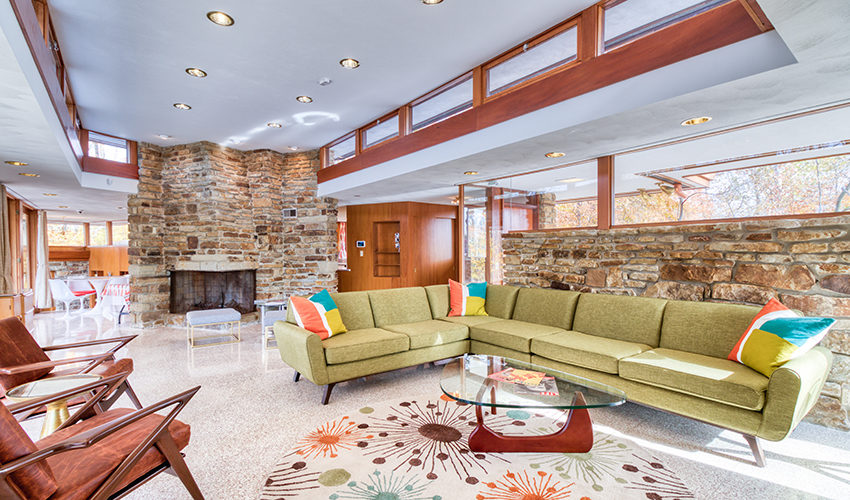 Rechristened the Harry Cooler Conference Center in honor of its architect, the Mills House will be rented for small meetings and business retreats. The property will also be featured on Indiana Modern's Back to the Future home tour on May 30, 2020 (Photo: Jason Wetherholt)
Previous Next

Vintage photos and slides aided work throughout. After a friend sent her an article about the renovation, Susan Mills England, the daughter of the original homeowners, reached out to Anthony to share her memories of growing up in the house and a scrapbook of historic images. In a happy coincidence, Anthony found a photo of Ernie and Edith Mills standing near the staircase beneath a sputnik-style light fixture that perfectly matched a vintage fixture he’d already purchased for the space. “That’s the great part about the house being built in the last sixty years. There’s still people around that can tell its stories,” says Anthony.

Scouting online auction sites and antiques shops, Anthony outfitted the house in mid-century style, with a mixture of reproduction and original pieces, including a Wright-designed table he found in the Netherlands. The bathrooms retain their original salmon and dark green color schemes, with Anthony installing green tile in the master bath’s shower to match the original sink.

“Finding out that he was dedicating this conference center to my dad, I was completely speechless,” says Bill Cooler. “My family was brought to tears of joy at Todd’s vision and I just think of how proud my father would be of him. Ever since he bought it, it’s been a euphoria of watching the place evolve.”

The Mills House will be one of the homes featured on this year’s Back to the Future tour on May 30, 2020 in Indianapolis, sponsored by Indiana Landmarks’ affinity group Indiana Modern. Watch upcoming issues of Indiana Preservation for more tour details. To learn more about the Mills House’s history and see additional photos, visit coolercenter.org.