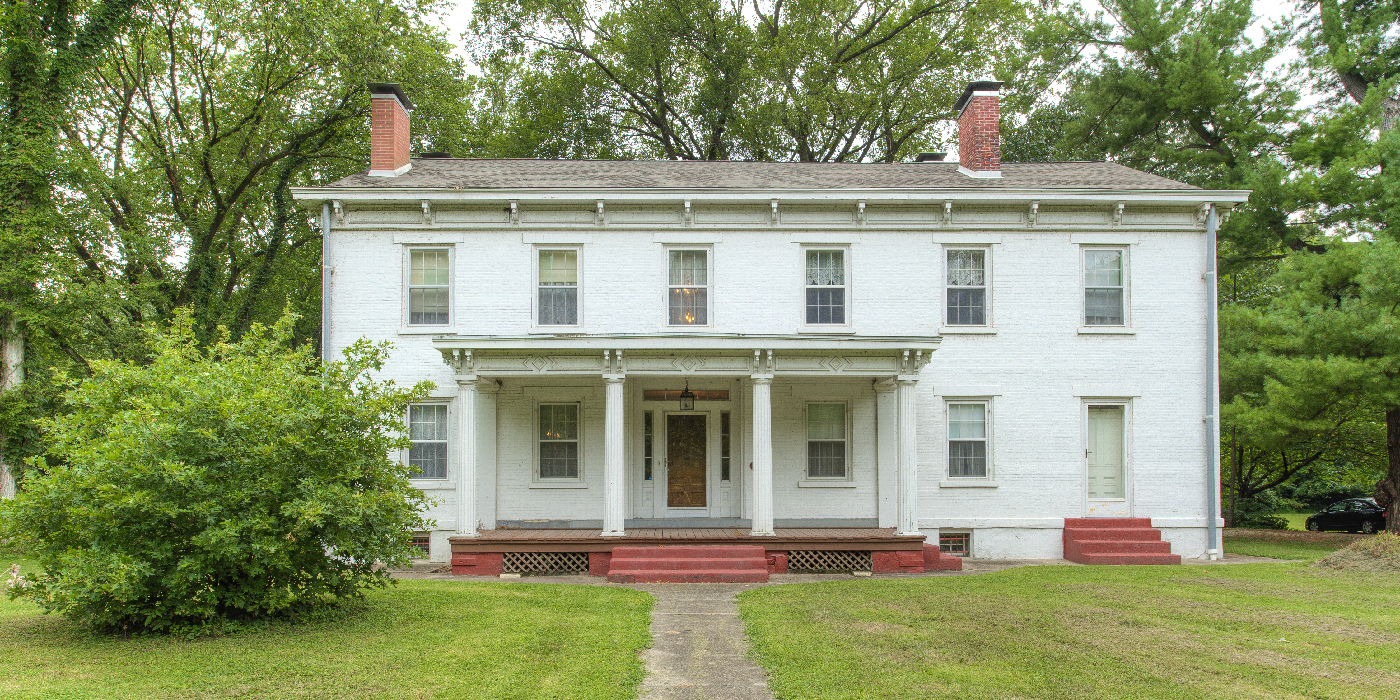 Planning for the Future

For most people, caring for a historic property is a labor of love. After years spent preserving the architectural character and history of a place, owners understandably want to protect their hard work and investment.

A preservation easement serves as a legal tool to protect a historic landmark. Two recently sold properties—a former Jewish synagogue in Ligonier and one of Vigo County’s oldest houses—are protected by preservation easements donated to Indiana Landmarks, charging the organization with safeguarding the architectural integrity of these structures in perpetuity.

In the late nineteenth-century, Ligonier boasted one of the state’s largest Jewish populations, which worshipped at the 1889 Ahavath Sholom Synagogue. As numbers began to decline in the mid-twentieth century, the congregation sold the synagogue to a Methodist group in 1954. A number of other protestant churches occupied the building until 1985, when the Ligonier Public Library received it for use as a museum showcasing the history of Ligonier and its once-thriving Jewish community.

Following a major expansion and renovation of its main facility, the public library decided to sell the former temple, concerned it would no longer be able to maintain the aging structure, one of only two nineteenth-century synagogues remaining in Indiana. 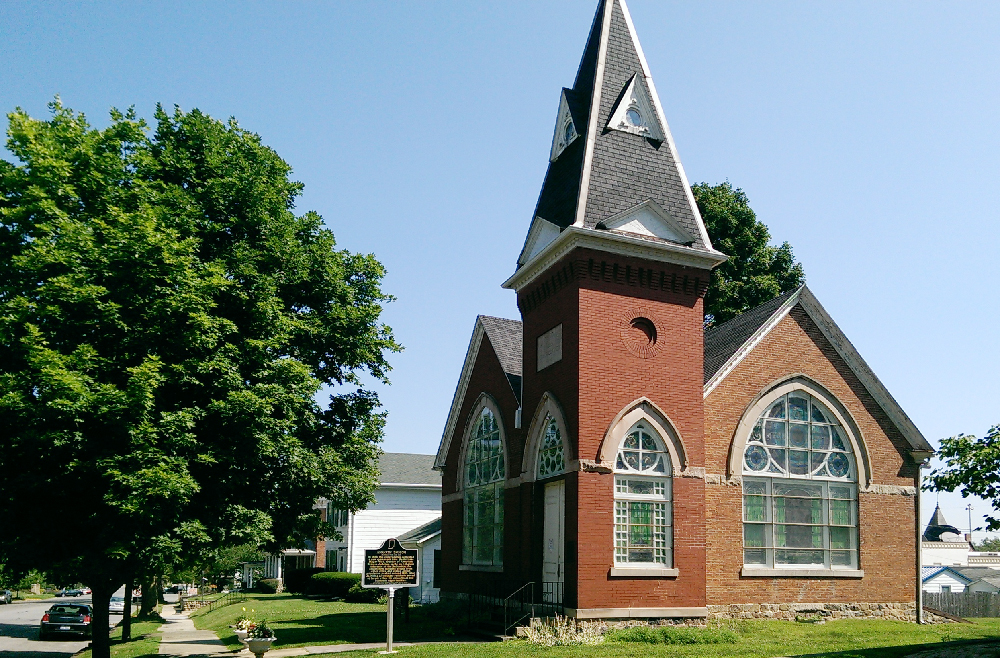 The temple is also one of only two religious structures attributed to Fort Wayne architect Harry Matson, who made a name for himself through his designs of opera houses in Garrett, Kendallville, Lagrange, Frankfort, and Muncie. Matson’s design for the temple features a tall corner tower and three large stained-glass windows illustrating the story of King David. A preservation easement donated by the library to Indiana Landmarks protects the building’s exterior and the original stained-glass windows—features that attracted its new owners, Stacey and Greg Merrell.

After months of searching for a historic property to turn into their primary residence, the Indianapolis couple discovered the real estate listing for the Ligonier temple on Indiana Landmarks’ website.

“Originally, Stacey and I were just looking for non-traditional housing. A library, movie theater, or maybe an old schoolhouse that we could put our stamp on and help fund its continued existence. But seeing Ahavas Shalom for the first time was transformative to that mindset,” says Greg. “Once inside, we couldn’t help but fall in love.” 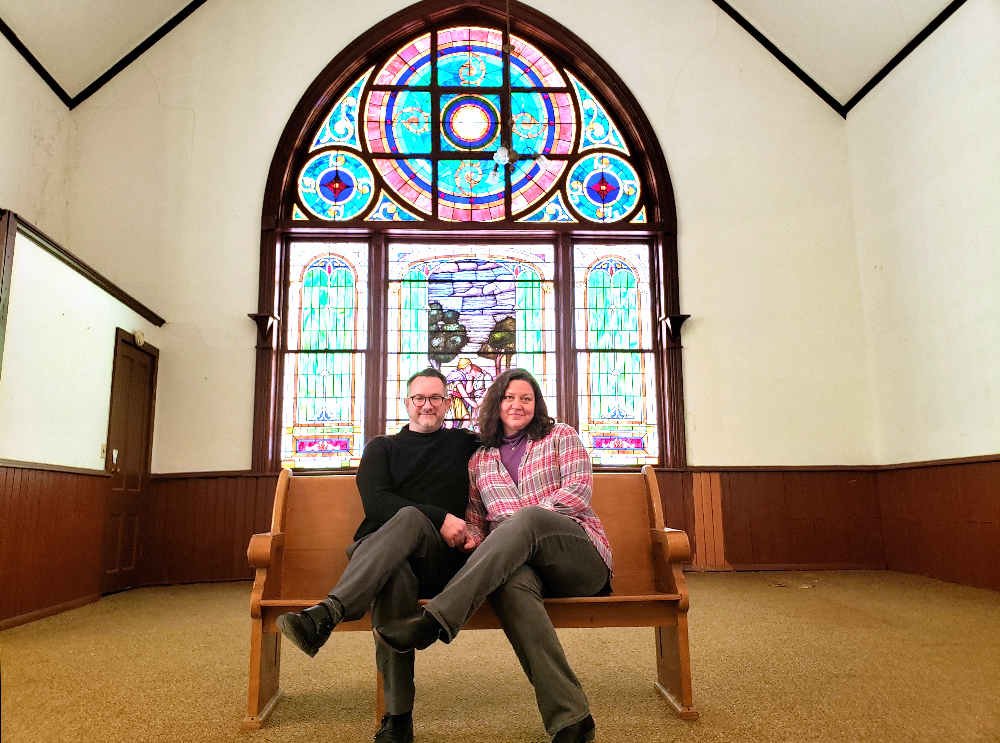 Greg and Stacey Merrell were looking for an unconventional home when they found Ligonier’s 1889 Ahavas Shalom Synagogue for sale on Indiana Landmarks’ website. They’ve donated a preservation easement to protect the temple’s historic character.

Months of consulting with a preservation-sensitive contractor referred by Indiana Landmarks helped the couple confirm that their vision, and budget, could work within the historic temple.

“You do immediately feel the weight of it all. This place bore witness to some of the most important moments in the lives of thousands,” says Greg. “We are incredibly grateful to Indiana Landmarks, thrilled to be the building’s new caretakers and proud to become part of Ahavas Shalom’s history,” he adds.

The Markle House on Mill Dam Road near Terre Haute is one of the oldest intact historic residential structures in Vigo County. Built in 1848 by Frederick and Sarah Markle, the house originally served as the Markles’ residence, as well as Frederick’s office for the mill operation across the road on Otter Creek, and a stagecoach stop on the line he operated between Terre Haute and Lafayette. The Markles’ mill burned in 1938, but its stone and concrete foundations and dam remain. The house and mill site are listed in the National Register of Historic Places. 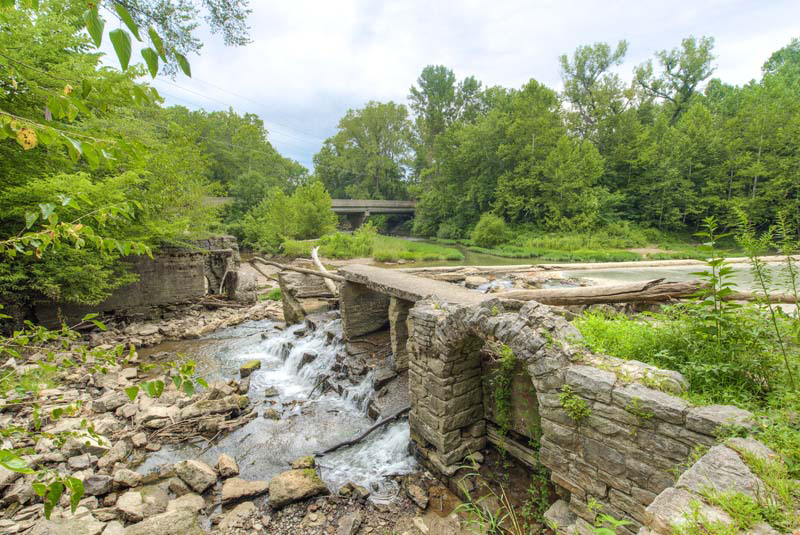 The remains of the Markles’ mill and dam are still visible on Otter Creek. (Photo: Everhart Studio)

Sallie and Don Cox bought the Markle House in 1983 and embarked on a complete rehabilitation of the property. After Don passed away in 2011, Sallie continued stewardship of the house. In recent years, as she considered selling the property, she reached out to Indiana Landmarks about donating a preservation easement.

“I wanted to help prevent the Markle House and the land from ever being destroyed by an unsympathetic future owner, and donating a preservation easement to Indiana Landmarks was the best way to ensure this,” says Sallie. 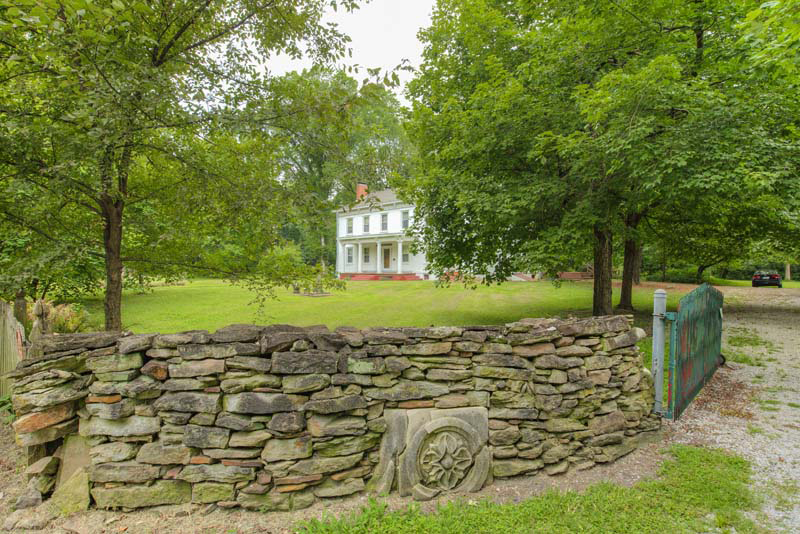 The property’s new owners, Ben and Rachel Porter, share her concern for safeguarding the landmark, which they intend to make their home.

“We are excited to see our dream of preserving a historic home become a reality, and we’re honored to carry responsibility for this important Terre Haute treasure,” says Rachel. “We want to carry on the work Don and Sallie did for so many years to protect and cherish it.”

To learn more about preservation easements, download our informational PDF, or call the Indiana Landmarks regional office nearest you.