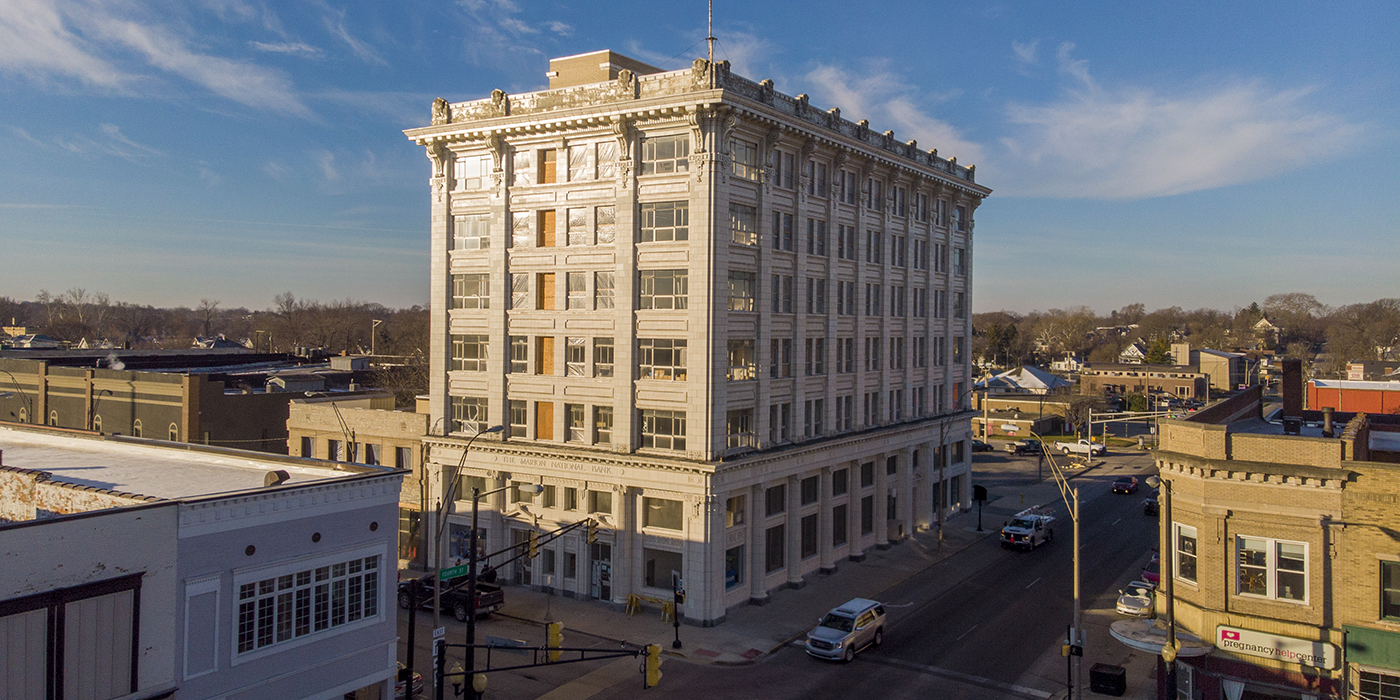 In downtown Marion in Grant County, the former Marion National Bank towers over the streetscape, a gleaming white, 7-story skyscraper wrapped in glazed terra cotta. Vacancy and neglect by an out-of-state owner landed the building on Indiana Landmarks’ 10 Most Endangered list in 2017, bringing awareness to the site’s plight and attracting the interest of architect Mike Halstead. Today, Halstead’s firm is rehabilitating the building as Ridley Tower, a mixed-use development including offices, retail, and apartments. The transformation is the highest profile project in a wave of revitalization in downtown Marion.

Built in 1917, the Neoclassical-style landmark played a central role in the downtown business district for decades. By the time it landed on our 10 Most list, however, the building stood empty. A leaking roof had destabilized the ornate terra cotta cornice, sending chunks falling to the sidewalk below, and water infiltration left crumbling plaster and mold throughout the upper floors.

Halstead Architects, which has had offices in Marion since 2008, purchased the former bank in 2018, seeing an opportunity to reclaim the landmark’s role as a downtown anchor. “It’s a beautiful building in the heart of downtown,” says developer Mike Halstead. “It was silly it was abandoned so long.”

Workers replaced the roof to make the building watertight, restored masonry, and made building elevators operational again. The project is preserving original features, including the two-story interior lobby with its barrel vault central arcade, marble floors and teller stations, and ornamental plaster, as well as bank vaults.

In its repurposing as Ridley Tower, the mixed-used development preserves many of the building’s original features, including the barrel-vaulted two-story lobby, (Photo: Evan Hale)

While the COVID-19 pandemic in 2020 didn’t slow construction work, it did make it difficult for small businesses and restaurants interested in locating in the building to get start-up funding, which caused some delays in openings, notes Halstead. The first floor is completely leased, with plans for a barbeque restaurant and a coffee and ice cream shop. Halstead expects upper-floor apartments to become available for lease this spring.

In recent years, Indiana Landmarks’ Marion affiliate, Save Our Stories, partnered with city leaders, Marion Main Street, and the local housing authority to promote preservation as an economic development tool. The efforts are paying off. The city’s former Wolfe Law Building has been restored as a mix of retail and apartments, and just blocks away the c.1910 Dan-Mar and Cecilian apartments and 1903 Mecca Club are slated to undergo multi-million-dollar rehabilitation as affordable housing for seniors.

Across the state, the outlook is improving for another former 10 Most property, as The Commonwealth Companies starts early work to turn Terre Haute’s 1939 YMCA into Historic Walnut Square. The $10 million development will turn the building into 34 apartments, aided by federal historic tax credits, state rental housing tax credits, and a property tax abatement from the City. Vacant since 2006, the building retains many of its original Spanish Revival details, including stenciling, ornamental tile and ironwork, a carved stone fireplace, and concrete ceiling beams. Preliminary plans call for preserving these character-defining features as well as part of the historic gym.

When the Peru Circus Winter Quarters landed on our 10 Most Endangered list in 2019, leaky roofs threatened two historic barns and their invaluable collection of artifacts, now maintained by the nonprofit International Circus Hall of Fame. The status helped raise awareness of the group’s plight and boosted its fundraising efforts. The Hall of Fame raised $100,000 to put a new roof on the more immediately threatened north barn, where water infiltration threatened both the structure and the fragile collection of memorabilia it houses, including vintage posters, photographs, advertisements, one-of-a-kind costumes, and a miniature replica of the 1934 Hagenbeck-Wallace Circus. Indiana Landmarks staff provided technical advice on the project. 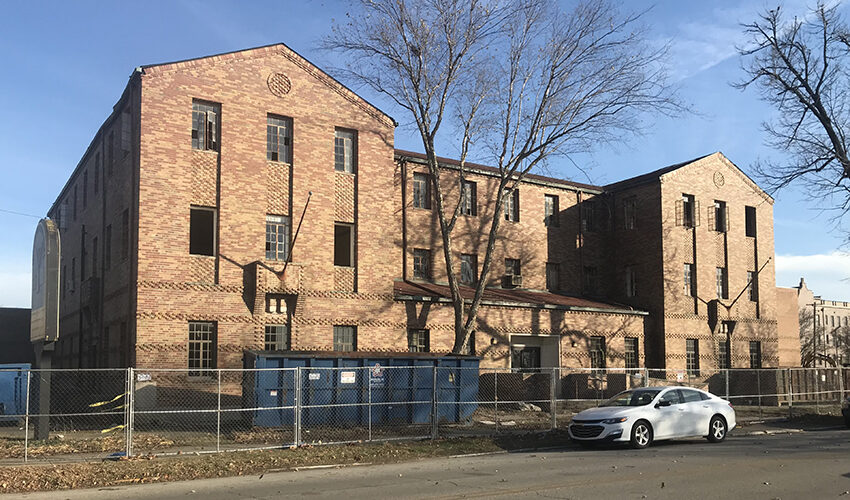 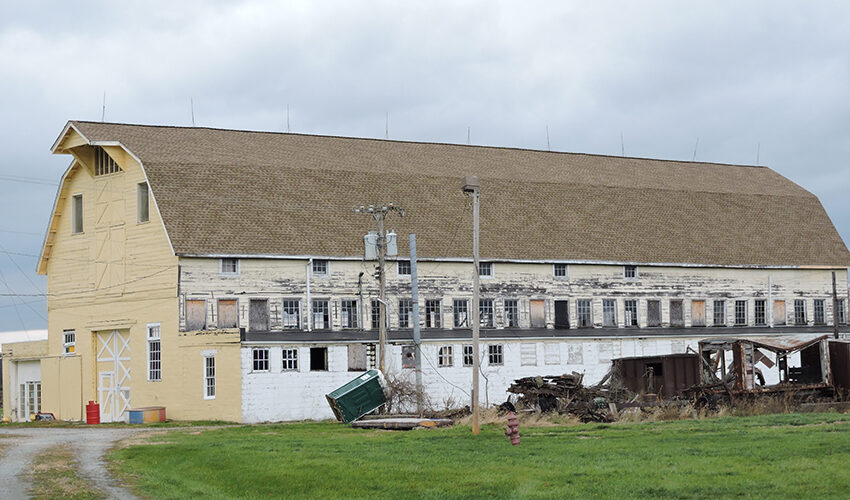 In November 2020, workers put a new roof on the north barn at the Peru Circus Winter Quarters following a successful fundraising campaign earlier in the year. (Photo: Regine Brindle) 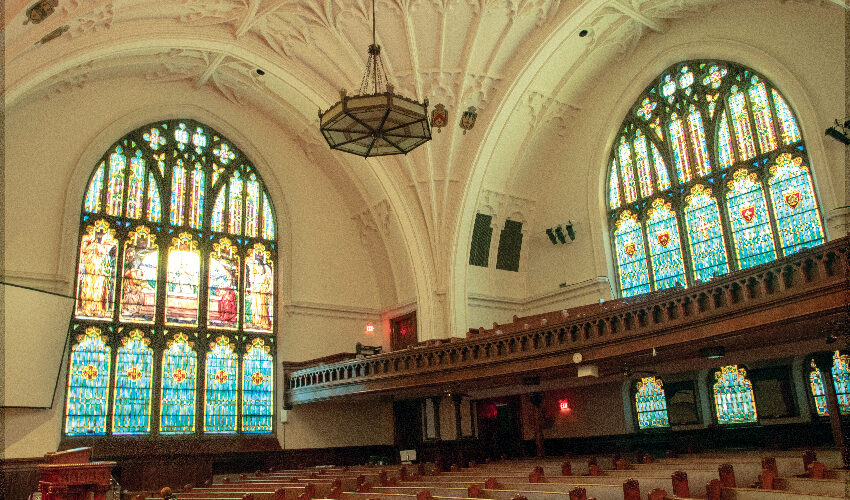 An Indiana Landmarks loan to the Whitewater Presbytery will help resolve ownership issues that put Richmond’s Reid Memorial Presbyterian Church on our 10 Most Endangered list. (Photo: Evan Hale)
Previous Next

As 2020 came to a close, Indiana Landmarks approved a loan to the Whitewater Presbytery to help resolve ownership issues that put Richmond’s Reid Memorial Presbyterian Church in limbo and landed the vacant church on our 10 Most Endangered list. Built in 1906, the Gothic limestone church is considered a standout for its extensive collection of stained glass windows and furnishings by New York’s Tiffany Studios.

“While not yet saved, this is a major step in the right direction,” says Indiana Landmarks President Marsh Davis. “We will continue to work with the presbytery and community leaders to brainstorm new uses to ensure Reid Memorial’s future.”