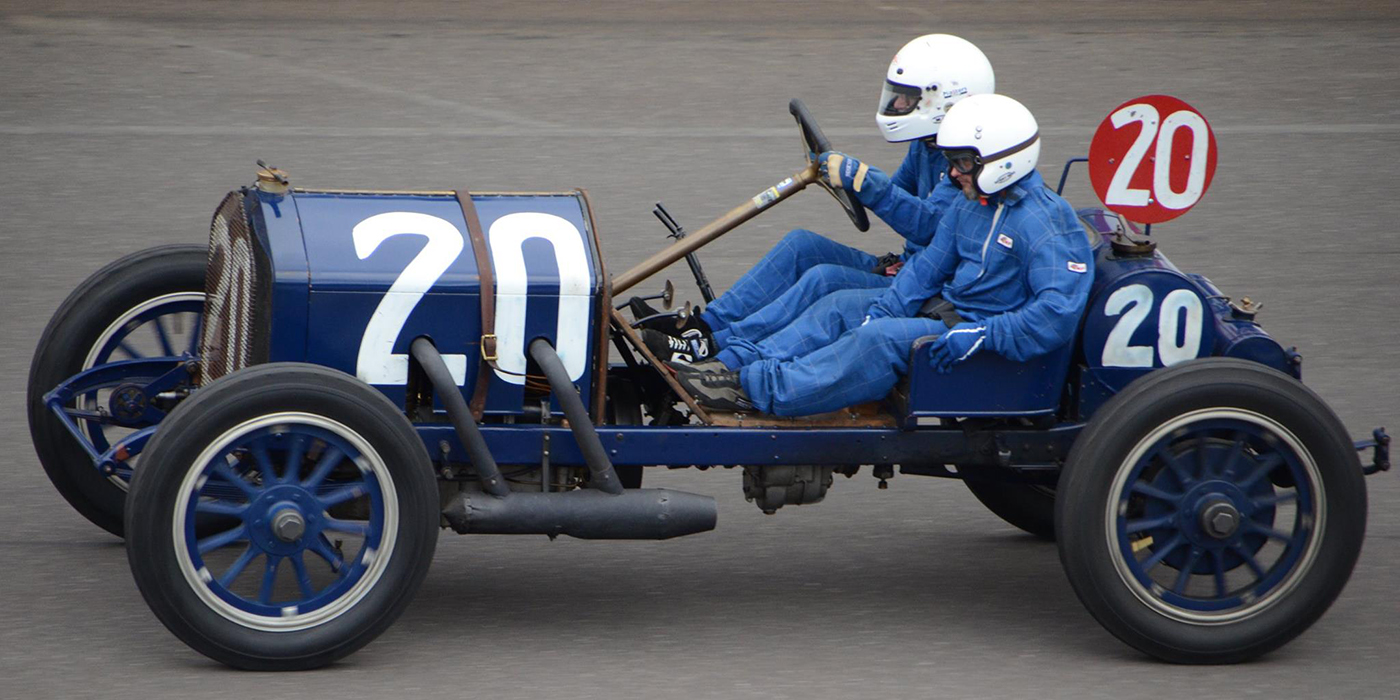 My life revolves around National, so I’ll go straight to National’s legacy, since the standard issue company background, duration of production, popular models can be found easily via the internet. Instead I’ll share my first-hand experience of being a ride-along mechanic on a 1911 National factory racecar during the 2015 and 2016 SVRA Brickyard Vintage Racing Invitational held every June at the Indianapolis Motor Speedway (IMS).

National came into my life in 2007 as I researched archaic motor sport factories here in Indy.

In 2011 I met Brian Blain of Visalia, California, who had recently restored a 1911 National 40 (#20), a starter the 1911 inaugural Indianapolis 500, driven by the talented Charlie Merz, who finished seventh. National championed three entries in 1911 and won the 1912 Indianapolis 500 driven by 23-year-old Joe Dawson. The 1912 victory of the National SX-1 (#8) still holds the record at IMS for the largest motor. It boasted a 498cc dual ignition firing National’s factory-built T Head motor.

Blain discovered the car here in Indiana in 2009, when it was cloaked as a civilian car boasting the T Head motor. A revamped civilian car holds its value better than a race-beaten chassis. The secret of the car’s true grit disappeared in the 50’s. In 1994, the lineage was finally exposed. Fifteen years later Blain purchased the vehicle, intending to restore it in time for the 2011 Celebration of Automobiles held at IMS.

The raw experience of riding in a 1911 race car is practically indescribable. In 2015 I was fortunate to pump fuel in a 1911 National #48 factory racer driven by Clem Lange as he and Brian Blain, driving his #20, crossed the yard of bricks side by side into turn one in 2011. The 2015 SVRA ride was racing at another level, one only experienced by a lucky few. It gave me a glimpse of what those drivers endured for six-plus hours, muscling their cars at speed into the turns.

Drivers suppressed their fatigue from the chattering cast-iron leaf spring suspension to meet the mark of 500 miles, 800 turns, upon the hallowed oval. As I zipped up my borrowed race suit and mounted the #20 National, I was assisted by Charles D. Test, great grandson of Charles E. Test, who was president of National Motor & Vehicle Co. from 1900-1909. Charles and I had become friends in 2010 through my research on National.

He explained to me that the safety belts were break-away belts and whispered “It’s better to be thrown from the car if there is a wreck.” Visions of catapulting from a mangled chassis filled my mind’s eye as he added a couple more pointers. Now barely strapped into a 1911 racecar, sitting on a wood-clad chassis staring at the wood firewall, I told myself “If they did it then, I can do it now.”

The engine cylinders were primed via the brass petcocks atop the cylinder heads waiting to explode once cranked by the crew. Blain knew this car like a first -born child, every sound, every whimper gave him insight as to the running condition of his National. My job as the rookie ride-along mechanic: pump fuel — pressure is everything. Though not measured in hundredths or thousandths, I found myself gazing intently at the foggy brass-trimmed National fuel pressure gauge while vertically pumping the keep needle to between 2 and 2.5 pounds of pressure.

Brian engaged first gear, released the exterior-mounted brass hand brake and the National roared to life as we exited the garage enroute to the Pre-War staging area in Gasoline Alley. My anticipation of traveling back in time inn this time machine was overwhelming. The SVRA Official’s one-minute-to-go index finger signal lit all the Pre-War cars to an imperfect baritone sound of valves thrusting to compression.

We were rolling, in the oldest of some 700 cars at IMS. We rumbled beneath the Gasoline Alley bridge, turning south on to the track. We were staged last, saving the best for last, in fact. As Brian brought the car to speed coming out of turn two I was already holding back the tears, not from the wind — that will come on the next lap.

Turn 3 greeted the National at her fastest corner yet. Turn 4 came and went. Now exceeding 75 mph down the front straight, the harmonic frequency began to rattle every bolt, lever, leaf of the car. Blain was man-handling the brass steering column as it vibrated 3 inches to and fro to reach max speed of 79 mph for the day.

Leaning into the turns, looking back to warn Brian of traffic approaching, the wind whipped against our helmets. The amount of air pressure against a modern helmet’s surface causes the riders to lean into the wind on the straights, squinting to clarify your vision. I caught myself several times during the four laps telling myself if I die tonight in my sleep, I will pass a very happy young man. 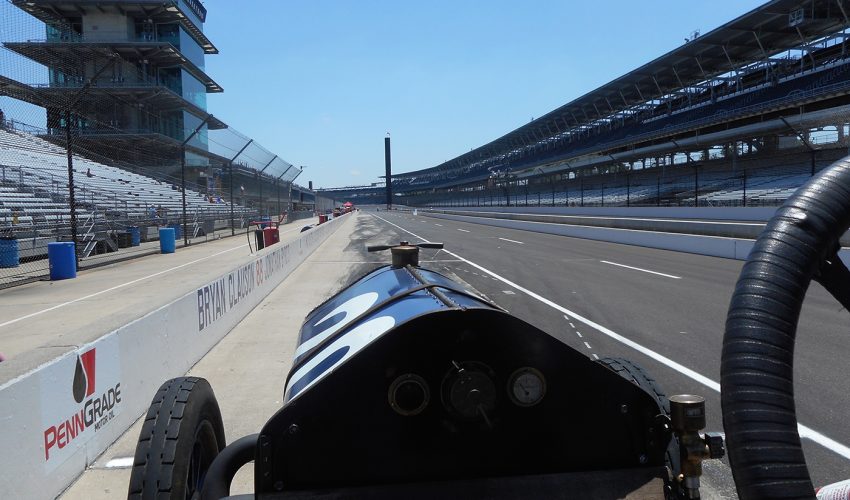 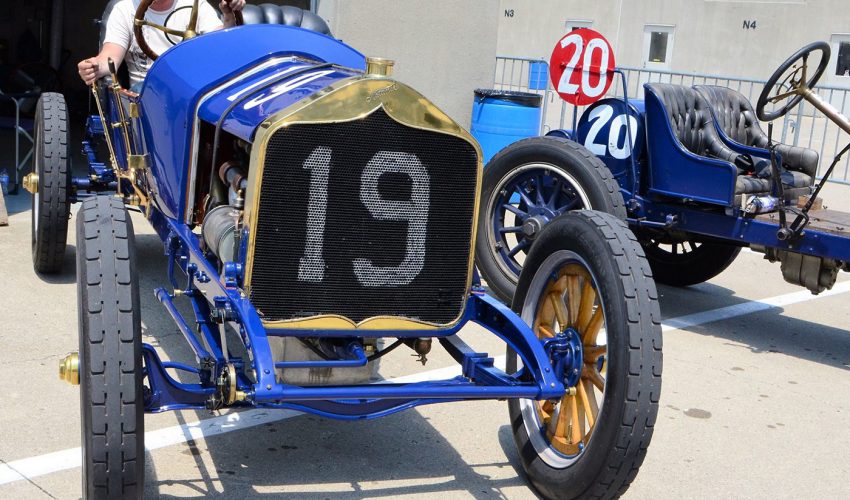 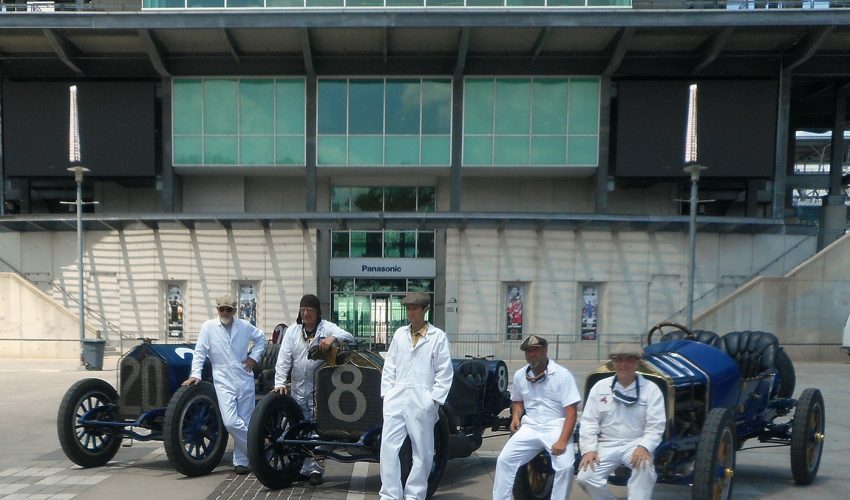 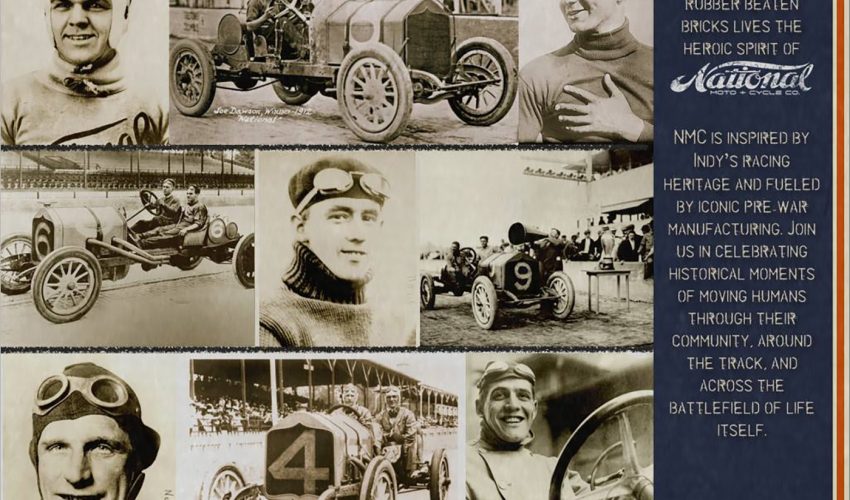 Being somewhat distracted taking in the view, witnessing the absolute purity of the spectator’s embracing waves, I noticed the front left wheel assembly violently vibrating and knew it could fail at any moment. Lap 3, entering turn three, I let the fuel pressure fall shy of the minimum 2 pounds. Simultaneously hearing the engine miss a couple beats, I received an elbow nudge from my driver to get pumping.

Four laps was the National’s limit that day as the leather-covered clutch began to stick. We knew this going out and I would have been content with one lap. That’s racing, nothing a water bottle with Coca Cola could not fix as I learned when Brian doused the leather clutch to remedy the antique’s malfunction. Old cars require old remedies I was told. Dusk was setting in and the track had once again changed someone’s life that day. Mine.

My respect for the track, the cars, and especially the gladiators who drove these beasts to victory was forever cemented. National’s elite group of progressive engineers and mechanics won on many a Sunday in order to sell the company’s civilian vehicles on Monday, not to mention catching the eye of the United States Army in WWI to supply officers’ transportation to the front lines. National is Indy. I am Indy. We all are Indy whether you are a fan or not. 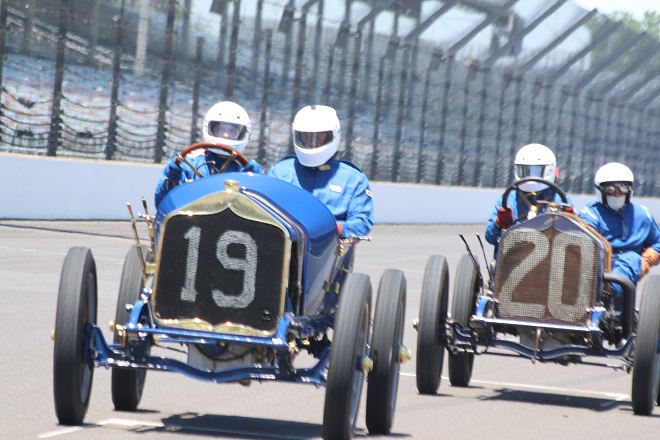 The 2016 SVRA Brickyard Vintage Racing Invitational brought back the National, represented by Blain’s #20 and Charles Test’s #19 1911 Speedway Roadster recently restored by Blaine. Test’s #19 was honored by the SVRA as best Pre-War car.

My company National Moto+Cycle Co. pays homage to the horseless age, through bicycles, motorcycles, and the pre-war era of racing in Indianapolis.