As GIs returned from World War II, the federal government provided low-interest mortgage loans that financed modern practicality rather than European romance or futuristic designs. The FHA, which backed GI mortgages, favored solid, architecturally conservative designs worthy of a long-term investment. Styles such as the ranch and the American Small House fit the bill and were easily mass-produced to fill new suburbs.

However, from the mid-1950s on, homeowners looking for more complex designs embraced a variety of contemporary styles. Many architect-designed houses later made their way into plan books for the masses or were offered as prefabricated homes. From the 1940s through today, Indiana claimed 36 prefabricated housing manufacturers, located from Gary to Evansville. Companies like Montgomery Ward, Sears-Roebuck, Aladdin, and the Chicago House-Wrecking Company offered affordable kits in a wide variety of styles and materials, and offered attractive financing plans for even modest incomes.

But in general, these homes were very much in keeping with the trends of pre-war twentieth century vernacular homes: the heavy drapes and ornate furniture of the Victorian era was jettisoned in favor of more minimal designs that favored new technology like indoor plumbing and flush toilets, electrical lighting, and central heat. Fireplaces, once a necessity, became primarily decorative. And the widespread adoption of automobiles meant attached garages would quickly replace detached carriage houses. 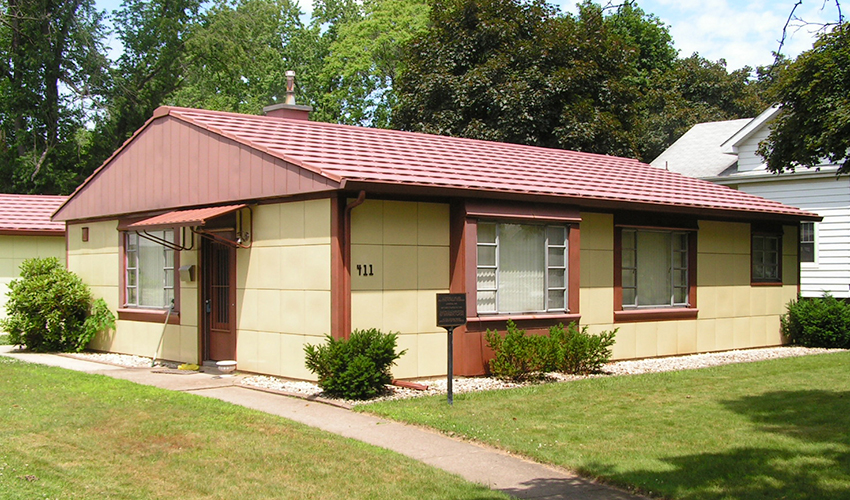 Perhaps the most easily identifiable prefab house, the Ohio-produced Lustron introduced porcelain-coated steel panels previously used on gas stations and White Castles to the housing market. Just imagine a steel house inside and out, where you could hang pictures with magnets.

Company owner Carl Strandlund saw his design as the answer to the post-World War II housing crisis. From 1948-1950 the Lustron Corporation created over 2,498 homes in a former Columbus aircraft factory, financed by a federal Reconstruction Finance Corporation (RFC) loan.

After a series of production delays, government finance inquires, and bad publicity, the RFC foreclosed the company’s loan in 1950. Conspiracy theories still circulate among Lustron buffs as to the role the mainstream housing industry may have played in the company’s demise.

Lustron constructed 159 homes in Indiana, many of which remain. The distinctive houses are easy to spot—one-story, two- or three-bedroom houses clad in two by two-foot square panels in pastel colors such as “surf blue” and “maize yellow.” If you get inside, you’ll find practical built-in storage areas. Some of the houses still have their original “Automagic” combination dishwasher/clothes washer. 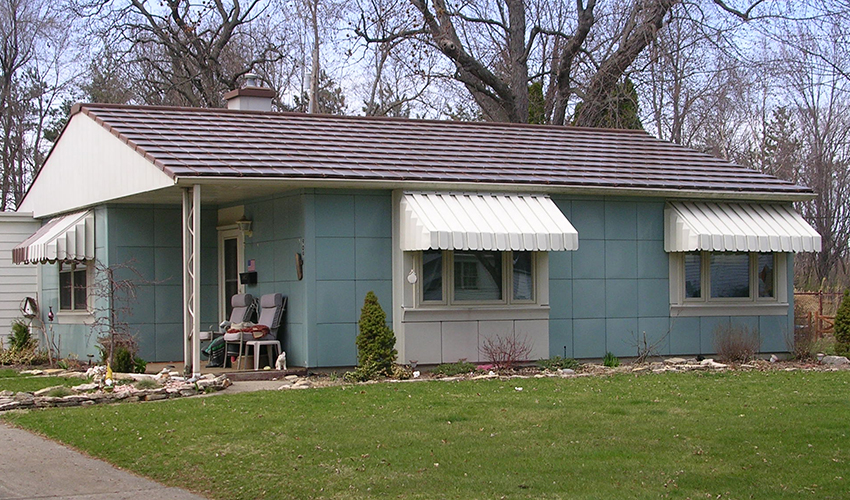 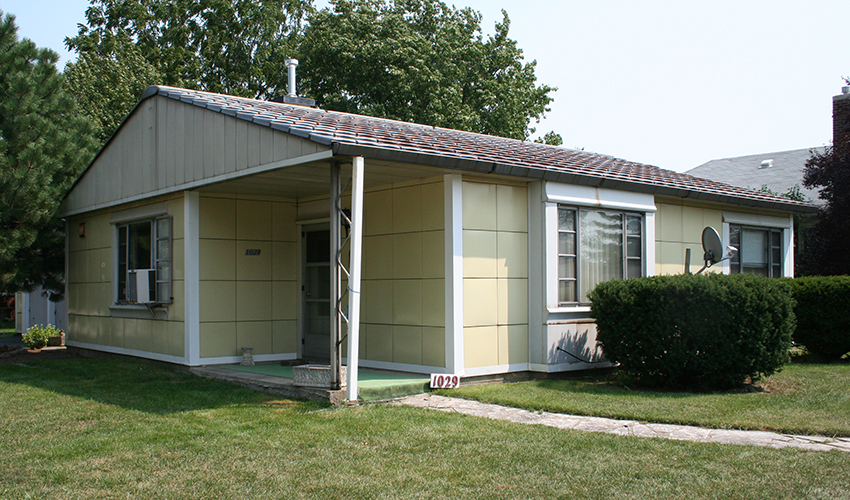 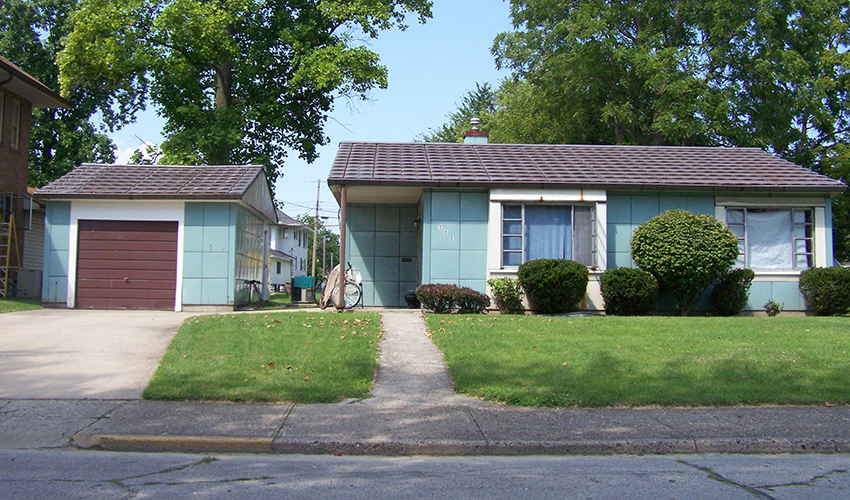 Originally, each Lustron home had a serial number, located in the utility room. 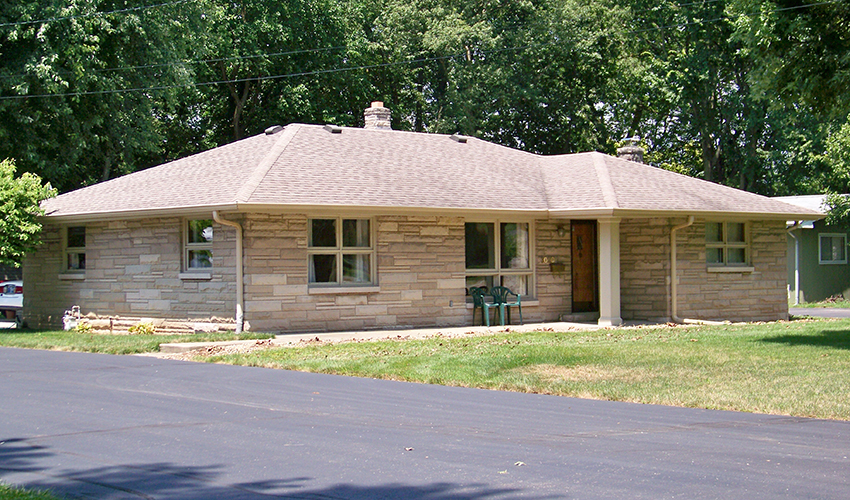 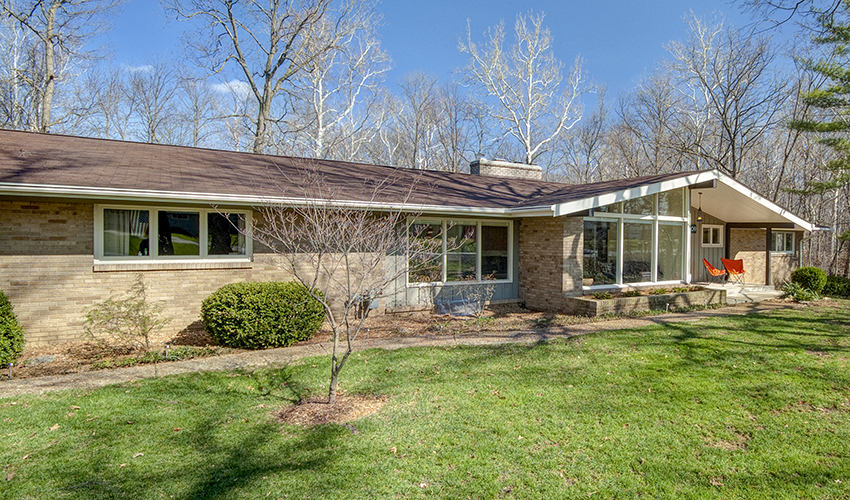 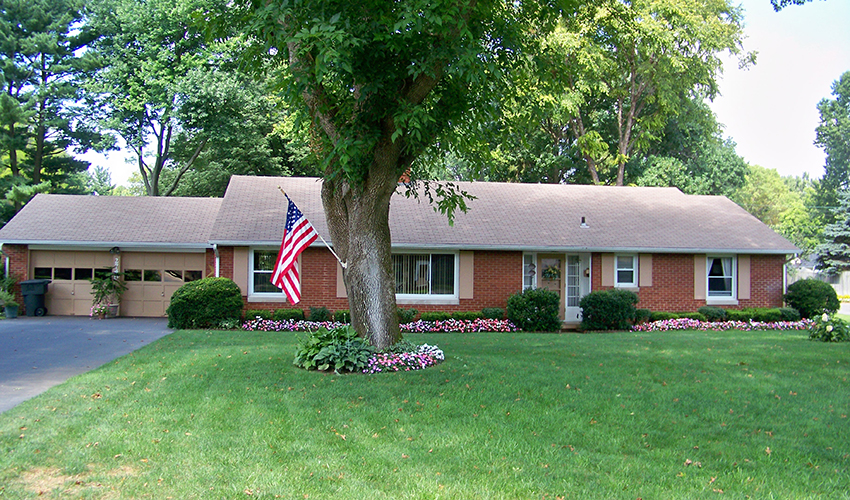 Post-World War II prosperity meant more people could afford cars, spawning suburbs that extended farther and farther from cities and towns and allowed for bigger houses and lots. Enter the rambling Ranch house that began on the west coast.

The Ranch dominated suburban housing from the mid-‘40s through the ‘60s. It appears in three basic footprints in Indiana: the linear ranch with a long, linear plan and low-pitched roof; the massed ranch distinguished by hipped roof and wide eaves; and the compact ranch, a scaled-down version of the traditional ranch with a side-gabled roof, well-suited for dense housing developments.

In addition to their linear design, Ranch houses took advantage of a growing window manufacturing industry, employing picture windows as well as casements, double-hung sashes, and horizontal panes that open at the bottom with the turn of a crank. Other building innovations included new cladding materials, garage door styles, and patterned concrete breeze blocks that allowed builders to break out of the American Small House cookie-cutter look.

The arrival of central air conditioning caused the decline of the front porch and the rise of the private backyard patio. Needless to say, if you had a suburban Ranch, you had a car. Attached garages, first one-car and later two-car, indicate the auto-centric lifestyle of the suburbs.

In case central air didn’t do enough to doom the front porch’s primacy as a gathering space, the arrival of television would be its deathblow. TV and AC: Name a more iconic duo. 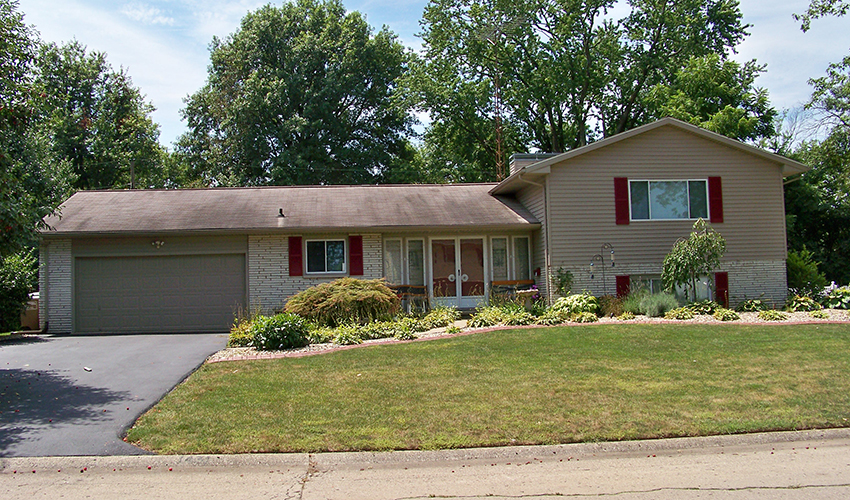 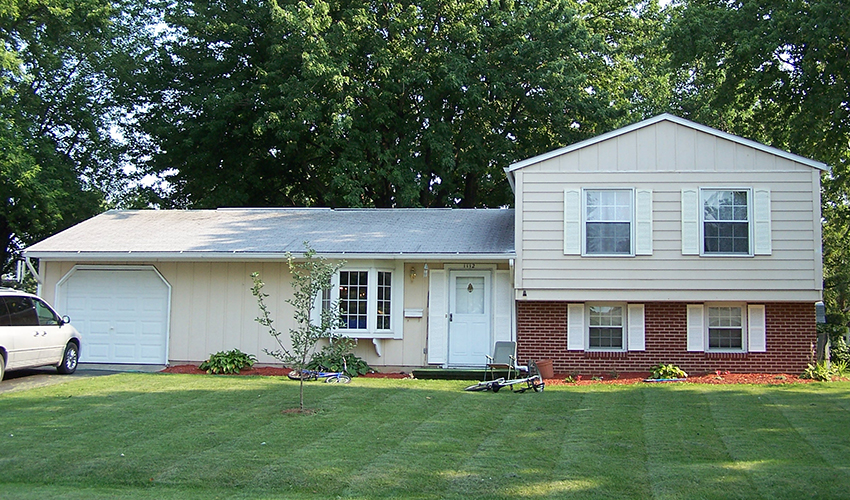 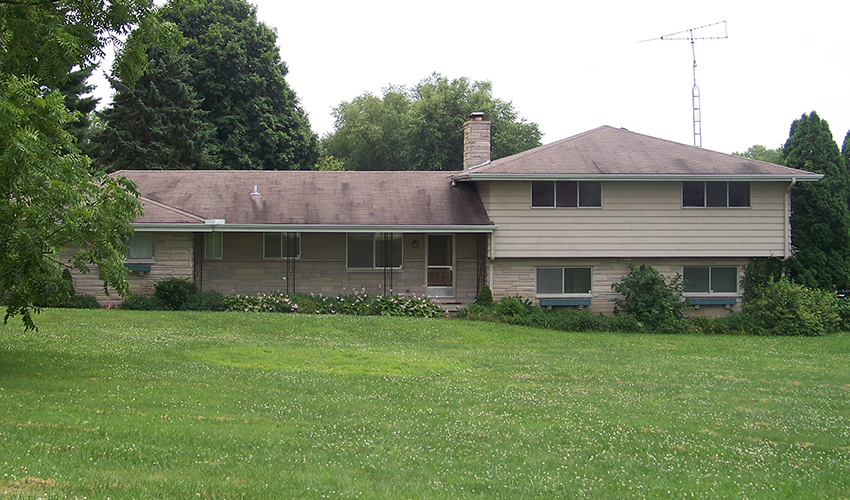 A variation of the ranch, the Split-Level house developed in the ‘30s, but saw a surge in popularity in the ‘50s and on through the ‘70s. The Small House Council at the University of Illinois used scientific surveys to identify the living habits of families and their preferences for space use. The Council determined that the Split-Level met the needs of the modern family by providing living spaces on the ground level that were well-integrated with the outdoors, sleeping rooms upstairs for privacy, and utility and recreational space in the partial basement, the least expensive area.

In a 1951 report, the council declared the Split-Level particularly well suited for women who liked to clean different parts of the house on different days. In 1955, the Council designed a Young Family House for Popular Mechanics that touted the practicality of the lower level play room which kept the children out from underfoot yet still visible to the mother working in the kitchen.

The garage, tucked under the raised bedrooms and providing access to the adjacent rec room, turned the front door into an entrance used mainly for guests and the Avon Lady.

The Small Homes Council’s publications included “Household Storage Study,” “Time and Cost Studies on Five Floor Systems,” and “Ceiling-Floor Partition Separation Studies.” They were nothing if not thorough. 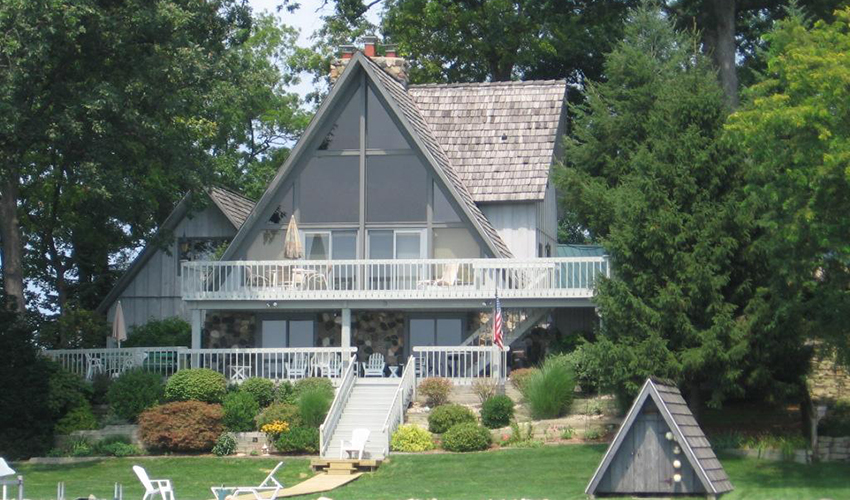 If you took a pontoon ride around a lake in the 1970s, chances are you saw A-Frames. The houses shaped like the letter A offered a vast expanse of glass in front between a steeply pitched roof that doubled as the side walls. The simple design of the A-Frame led to the production of easily shipped do-it-yourself construction kits. The form became especially popular for vacation homes on lakes and in woods.

Although the A-shape of the front and rear facades provides great views of the outdoors, the steeply-pitched roof creates unusable space and frequent head bumping on the sloping walls of the narrow second story.

A-Frames are still popular among the DIY set, since they’re relatively easy to build and plans can be readily found online. If you don’t mind small quarters, they can be built for as little as $700. 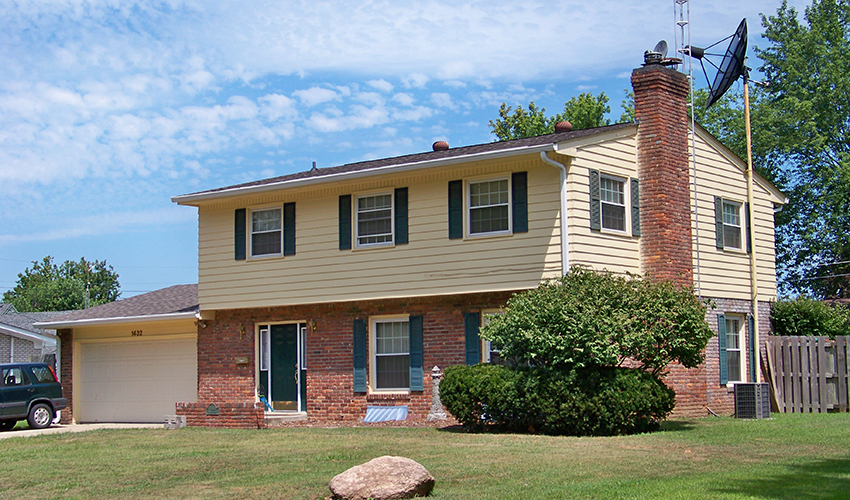 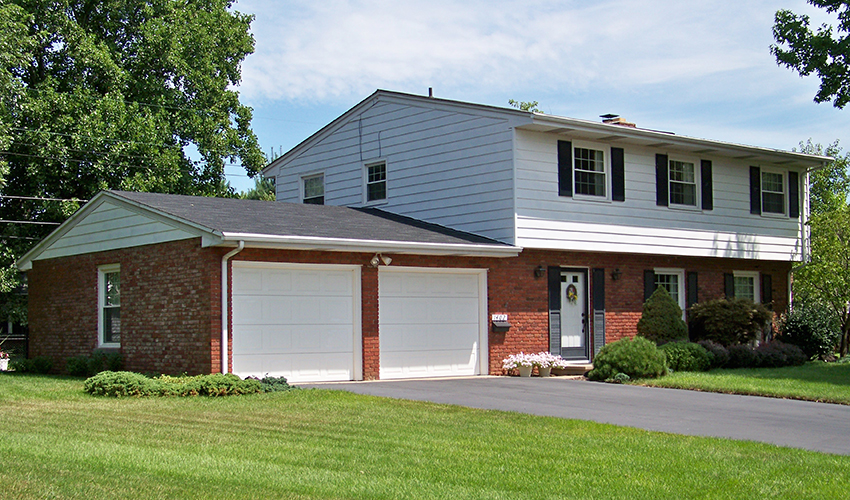 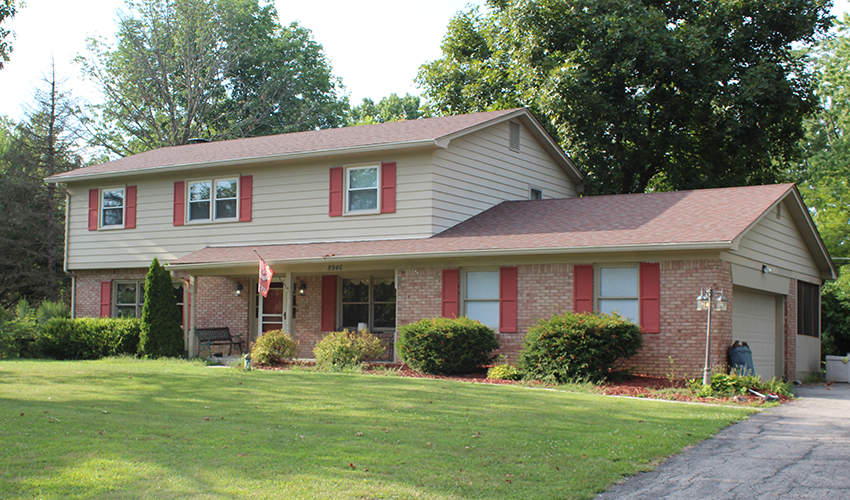 The Massed Two-Story house appealed to the homeowner looking for a traditional design and a little more privacy than the Ranch offered. The house separated the bedrooms from the kitchen and common spaces. The form also provided separate spaces for casual family activities and formal entertaining. As with the Ranch style, central air-conditioning removed the need for a front porch in favor of a small concrete stoop. And the need for a car in suburbia dictated at least a two-car attached garage. Many Massed Two-Story houses incorporate basic Colonial Revival details, perhaps a response to the U.S. Bicentennial of 1976. These rectangular houses—built of frame, brick, artificial siding, or a combination of materials—have low-pitched side-gabled roofs. Shutters frequently decorate the double-hung sash windows. 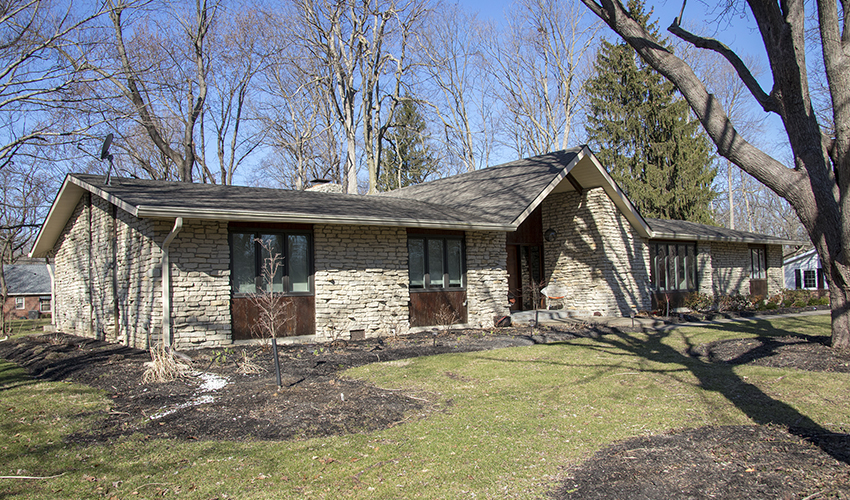 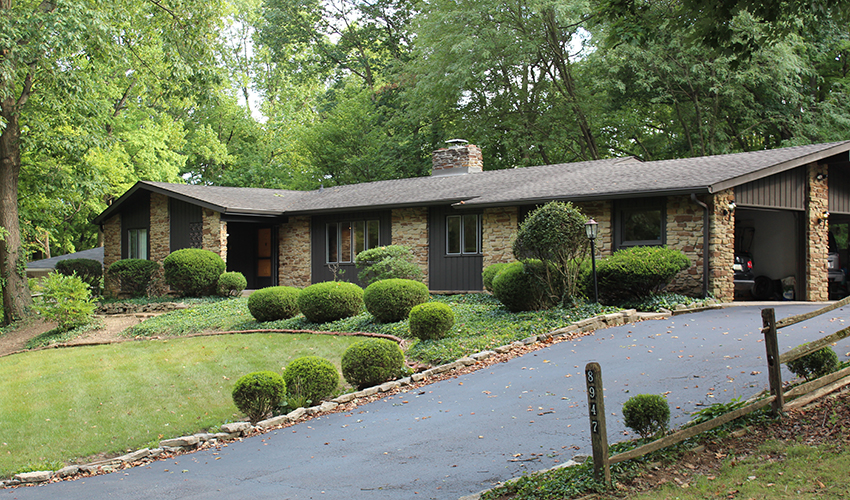 “Contemporary” never lasts. In retrospect, these periods will be given names of their own. As with most art, “contemporary” here is just a handy placeholder until our grandchildren figure out just what on earth was going on.