When GIs returned from World War I, they brought back admiring memories of English country houses and French chateaus. Architectural historians attribute the popularity of houses with English, French, Italian, and Spanish details to the influence of veterans returning from European postings. The period revival styles suited the new suburban developments with large lots made possible by extended streetcars lines and automobiles.

The upper-middle classes cast aside the hand-made Craftsman aesthetic and embraced the aristocratic European look of half-timbered facades, tile roofs, and leaded glass windows. For a walk through the period revival styles, search out 1920s upper or upper-middle class neighborhoods in Indiana—the North Meridian Street Historic District in Indianapolis, for example, and the Illsley Place-West Rudisill Boulevard Historic District in Fort Wayne. 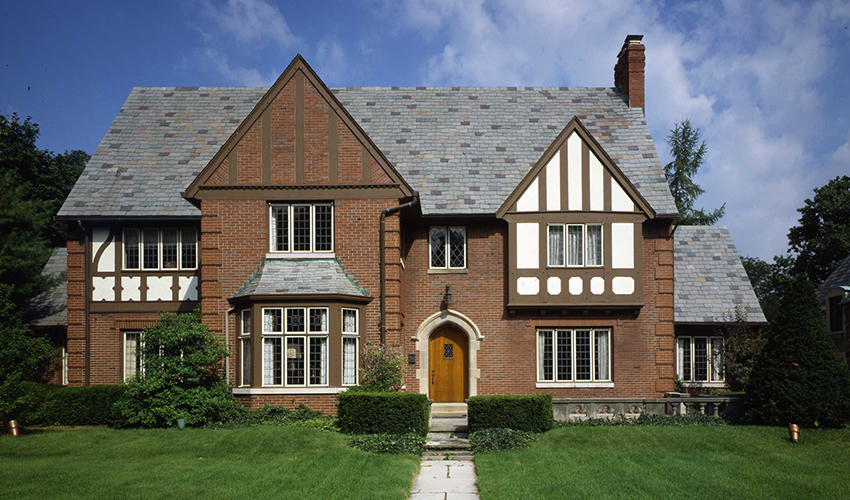 Tudor Revival in the U.S. does not accurately reflect the architecture of the Tudor period in England but is instead an interpretation based on nostalgia that combines elements from several historical periods.

These picturesque houses range in size from mansion to cottage, yet they all manage to incorporate at least one steeply-pitched gable, and half-timbering or decorative brick accents. The most imposing examples have slate roofs, leaded glass casement windows, and prominent chimneys capped by clay chimney pots. While some display the Tudor arch, which appears slightly flattened with a point at the top, a simple round arch is more common.

Advances in construction technology, like brick veneer, also added to the style’s popularity. This meant that unlike their medieval English counterparts, which had solid brick or stucco walls, Tudor Revival houses have half timbers applied to veneered masonry walls as decoration rather than structural reinforcement. In the early 1920s, the style achieved such popularity among the upper-middle class, it was nicknamed “Stockbroker Tudor.” 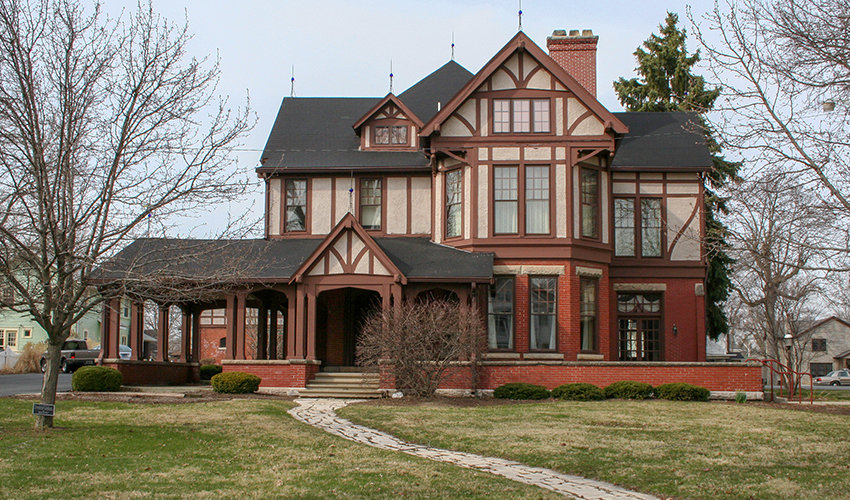 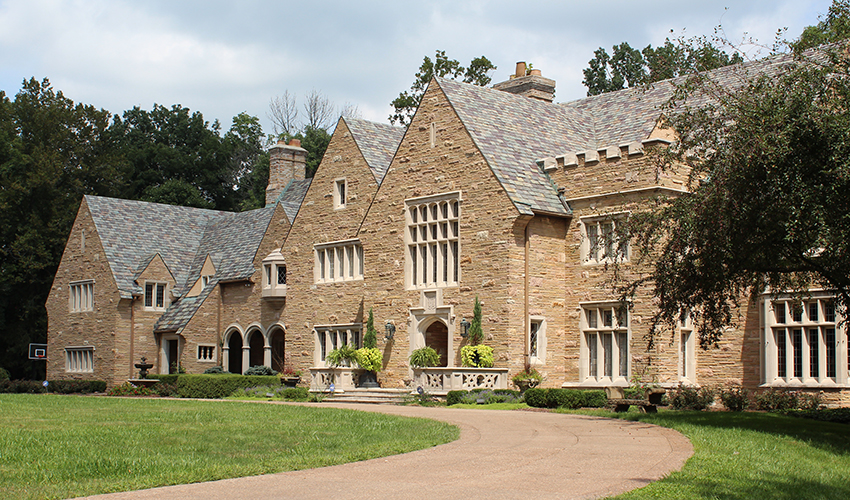 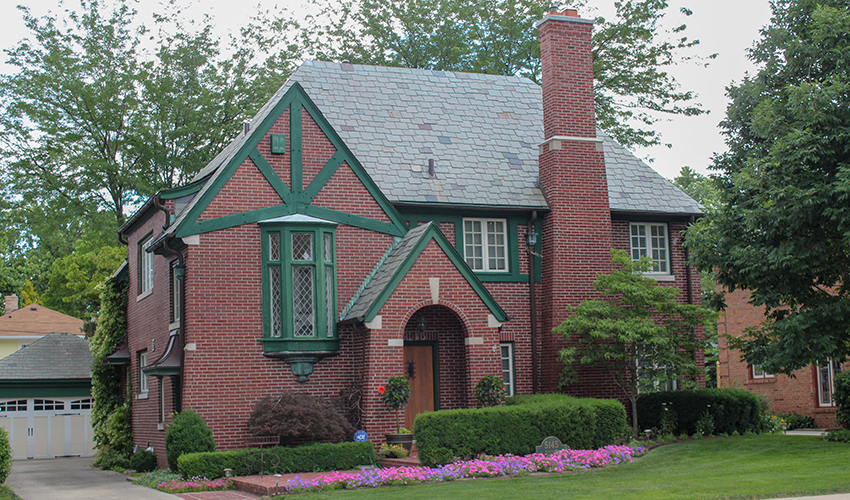 The actual Tudor period lasted from 1485 until 1603, a period marked by the English Reformation and Henry VIII. Traditionally considered a “golden age,” this Tudor myth has since received a bit more scrutiny, since historians love a good argument. 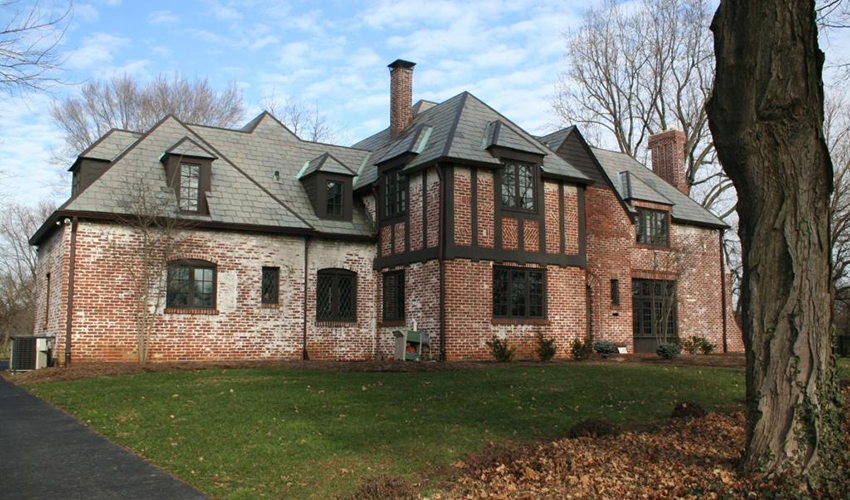 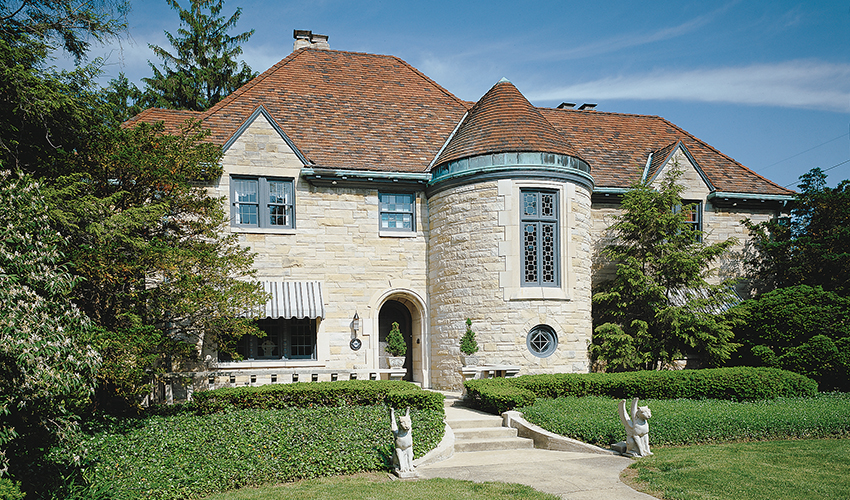 Architectural historians believe the admiration of French chateaux on the part of returning World War I vets caused a mini-boom of American chateau-building. Among the vets were architects whose work was promoted through photographs and articles.

The Americanized version of the style features a steeply-pitched hipped roof with slightly flared eaves. Roofs are often slate, but you may also find examples with roofs of clay tile. Like the French originals, some houses have towers and dormer windows. In Indiana, French Eclectic houses typically use masonry construction—either brick, stone, or a combination. Half-timbers infilled with stucco or brick may accentuate the second stories.

Spanish Revival Style was popular around this same time, and Italian Renaissance. If you weren’t a fan of European style, it was probably a very difficult period. 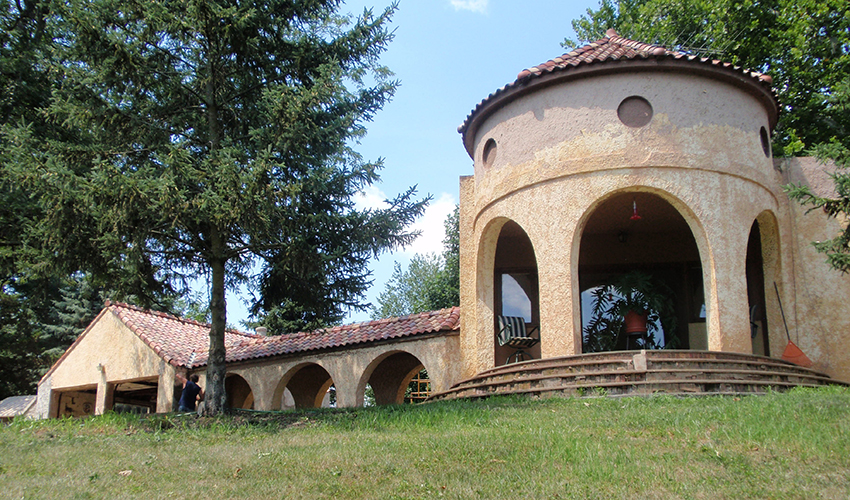 Don’t confuse Mission furniture with Mission architecture. The furniture reflects simple, sturdy, hand-made aesthetic of the Arts and Crafts design movement. The architectural style takes its inspiration from the early Spanish Colonial missions of Mexico and the southwest United States.

San Francisco architect Willis Polk promoted the style through his residential designs for his hometown after the 1906 earthquake and for the 1915 Panama-Pacific Exposition. And like so many other early twentieth-century styles, mail-order catalogs promoted Mission designs from coast-to-coast.

What distinguishes the Mission style from Spanish Revival style is the use of a parapet —a low wall that rises above the roofline. Like their historic counterparts, the parapets of Mission houses are scalloped. Red clay tile roofs and stucco walls also impart the Old World Spanish feel in early suburban Indiana neighborhoods. Given Indiana’s stucco-unfriendly climate, it’s not uncommon to see Mission buildings constructed in brick. 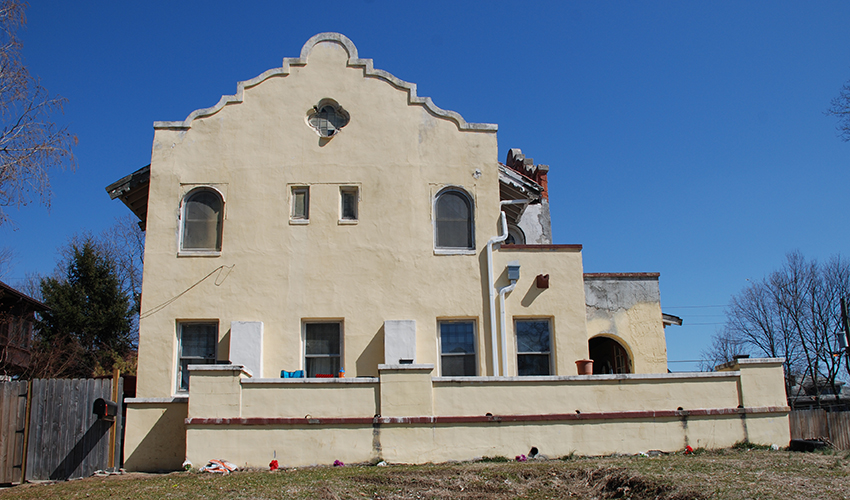 Stucco doesn’t do so well in rainy climates or during harsh winters, making Indiana a tough place for it. However it does hold up better than adobe. 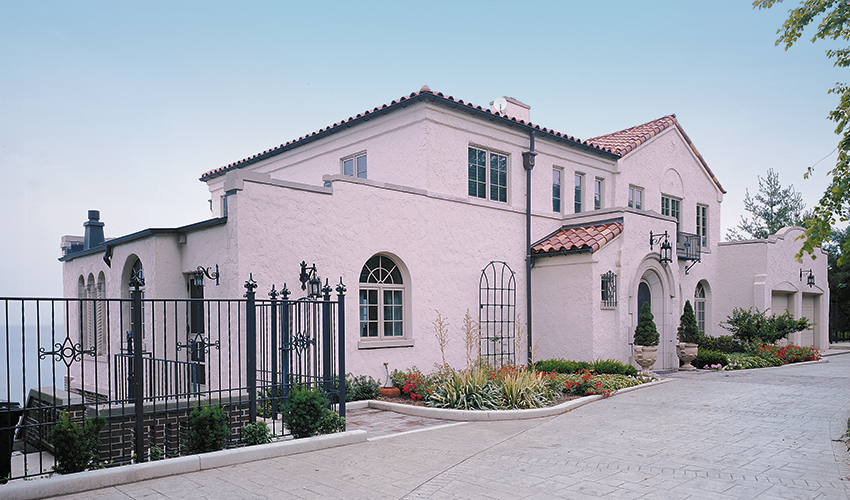 In the 1920s, architects frequently followed a more academic Spanish Revival that drew from the broad variety of Spanish architecture for inspiration. Like the Mission style, Spanish Revival houses feature stucco walls and clay tile roofs but lack the distinctive scalloped parapet—think more hacienda, less mission. While they look more at home in the south and southwest, examples of the style in large and small versions dot the suburbs of early twentieth-century Indiana. And though Indiana’s harsh winters are not kind to stucco, it is the preferred material for the authentic look.

This style was popularized by American architect Bertram Goodhue. While his influence can be seen in Indiana, it went over like gangbusters in Hawaii, where he designed the influential Honolulu Museum of Art. 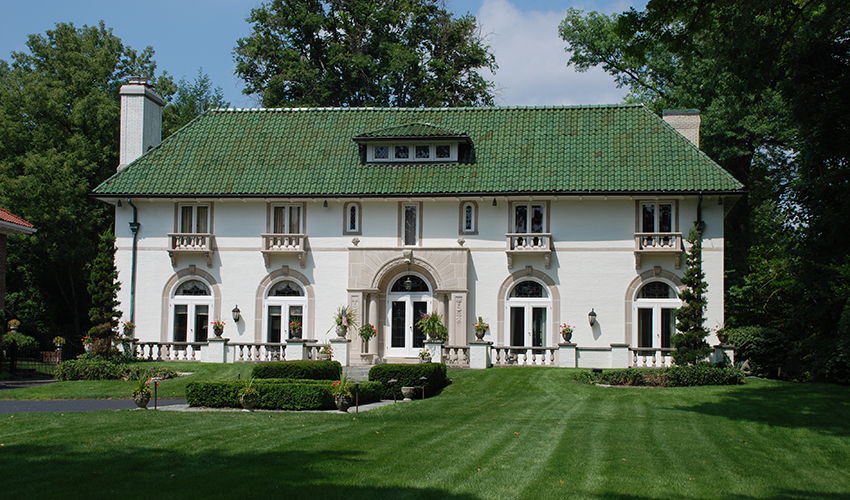 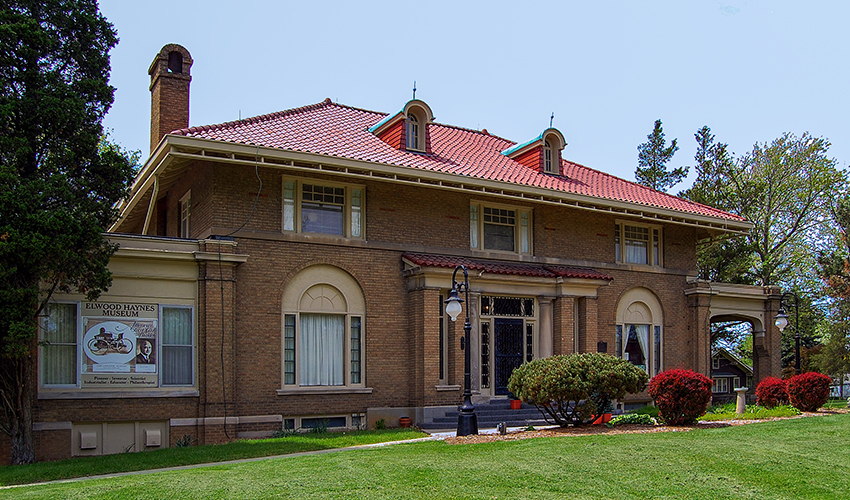 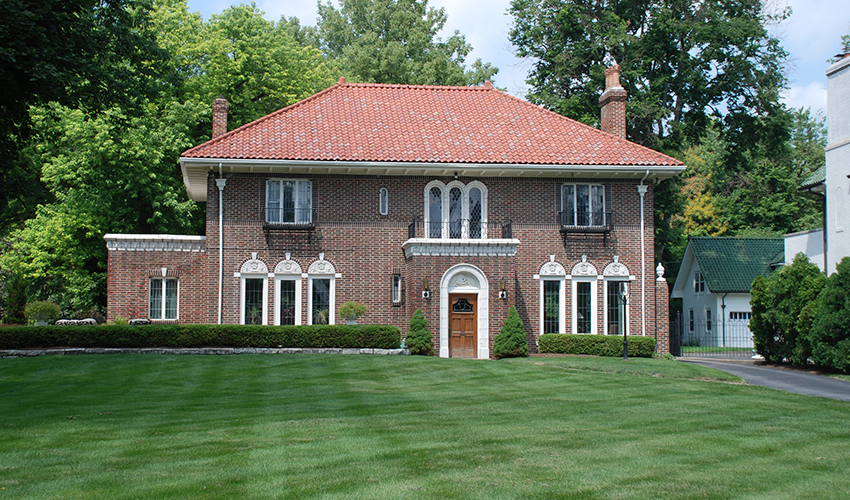 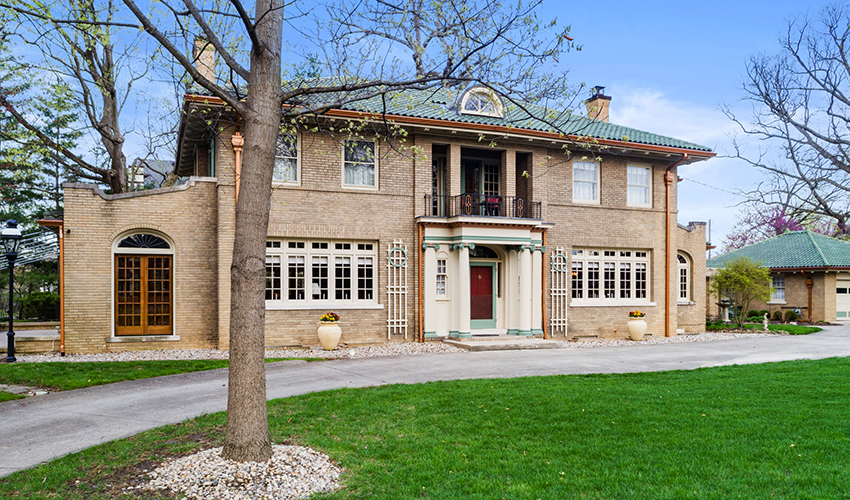 Their overall appearance is rather formal, often symmetrical, and may incorporate columns on porches or balustrades on balconies. Like the Italianate style, Italian Renaissance houses display overhanging eaves with decorative brackets. Brick, stone, and plaster are the most common construction materials.

Clay tile roofs are quite well-suited for Indiana weather, able to withstand the heat, the cold, and the rain. They last a long time, too. It’s a wonder we don’t see more of them.